Be a Better Brewer: Get SMaSH'd On Brew Day

There’s an easy and delicious way to improve your beer creation skills. Just get "SMaSH’d" on brew day. Not smashed as in “drink a beer make a beer,” but SMaSH’d as in brewing Single Malt and Single Hop beers.
Brewing SMaSH beers dials you directly in to the abundantly flavorful and educational essence of two key ingredients, malt and hops. Sound good? It’s delicious. Also, having the simplest recipes make experimenting with ingredients approachable, and flavor profiles identifiable. 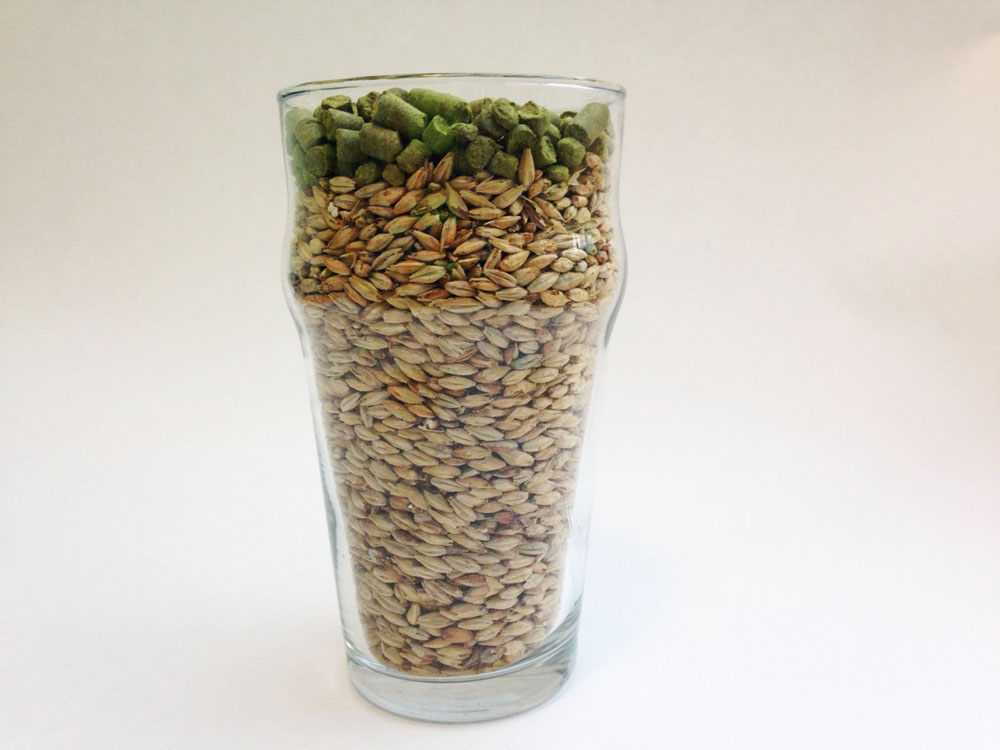 Making SMaSH beers help you clearly define flavor profiles beyond what's listed online.
In his book “Malt, a practical guide from field to brewhouse,” John Mallet describes malt as, “the soul of beer.” SMaSH brewing is the best way to learn the ways of the soul, although I’m not sure C.G. Jung would agree. Nevertheless, malt choice matters to the extract, partial extract, BIAB, and all-grain brewer alike.
In fact, one of my first SMaSH beers was a series of extract beers I brewed for one day’s worth of consumption among many beer-geek friends. I wanted to know whether a store-brand’s “golden” extract was better than the “big boy” brands. To find out, I made the same blonde ale with each brand.
It was a good bit of brewing to make all those batches identical, but it was worth it. At the time the store brand batch cost was approximately $6 less than the other brands’ batches. However, if it held up to a taste test, the savings would make the intense brewing schedule worthwhile. Game on.
Two things happened during the process: I got a lesson in brewing consistency, and my friends and I threw a heck of a BBQ under the guise of an “official taste testing.” Guess what else happened? The store brand won! My first exploration in brewing SMaSH beers would end up saving me serious coin. Not to mention we had a SMaSHingly good time at the BBQ.
Now, fast forward to when I dove into all-grain brewing: what a pool of choices there are here. It would be overwhelming if there weren’t a way to understand the flavor and performance of the many awesome base malts available to homebrewers. Sure, you can read about them on the internet and think you know them, but reading isn’t tasting, and tasting can’t be done on the purest level without SMaSH brewing.
Brew with a single malt and really know--not think you know--you have fully experienced your preferred malts.
Want to explore the difference between run-of-the-grist-mill US 2-row and California Select malts? What about the difference between Continental pilsner and German Pilsner malts? Does this maltster’s Maris Otter taste different than that maltster’s Maris Otter? What is Maris Otter anyway? The questions seem endless until you start to taste and brew with all these malts. Now, to many it might not matter. To them, good beer is good beer. Yet, to some what you learn about brewing with these malts in their purest form could mean the difference between perfection and ho-hum; it could be the difference between good beer and great beer. 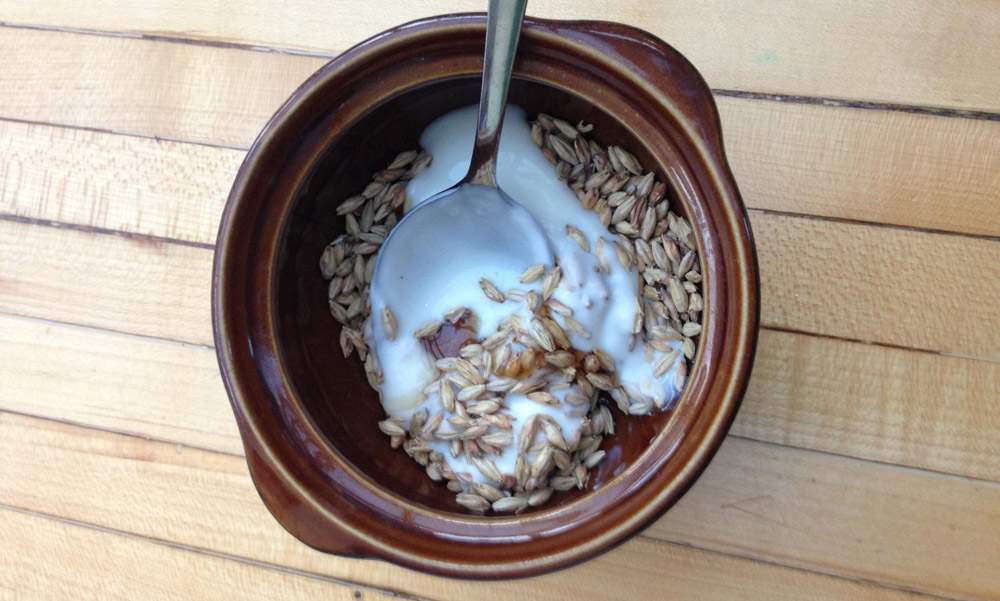 Tasting the grain raw (or with a bit of yogurt), can also help your perception of malts' flavors.
This is how I tackle a SMaSH brewing challenge to learn all I can from a single malt.
1) Read about the malt.
2) Taste the malt.
a. Whole
b. Crushed
c. Mashed (I like mine in the morning with yogurt and honey)
d. As wort
e. As beer
3) Take notes with a. b. c. d. and e. 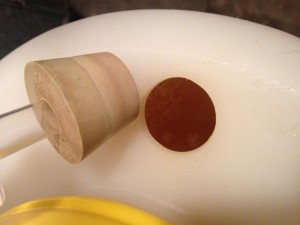 sneaking a peak of the hop aroma in the beer to be.
If malt is the soul of beer, hops then must be malt’s soulmate. Soulmates know when to lead, and when to step back for the other’s sake. Soulmates know when balance is best, or when to encourage the other to take center stage.
Your job as a brewer is to make sure these soulmates meet in your beer every time. SMaSH brewing can teach you how to do that. How to be the matchmaker, puppeteer, omnipresent beer master -- sigh -- whatever title floats your boat. SMaSH brewing will make you a better brewer because you and your taste buds will be in control of which hops, when and why…
Here’s a great activity for you and your club to do: Deconstruct an IPA. Or any beer for that matter.
For this example, we’ll deconstruct the hops listed on the brewer’s website for New Belgian Ranger IPA: Cascade, Chinook, and Simcoe. These are classic American IPA hops. You think you know them. But do you know them enough?


Get SMaSH’d on them, and find out how much more you can taste, and know about them.

You will need to choose:
• Three brewers with identical water: one brewer for Cascade, one for Chinook, and one for Simcoe.
• Base malt – a 2-row variety for sure, but which is up to you! Shoot for a gravity of 1.060
• Mash temp – 148-152°F likely works best here.
• Hopping schedule – go with 30, 15, and flameout additions to hit your target IBUs (40). Don't forget to dry hop. A 60-minute addition is optional and its value to today’s IPA is fodder for another article. Perhaps you could write it after you do this exercise.
• Packaging – choose to bottle or keg with identical methods. 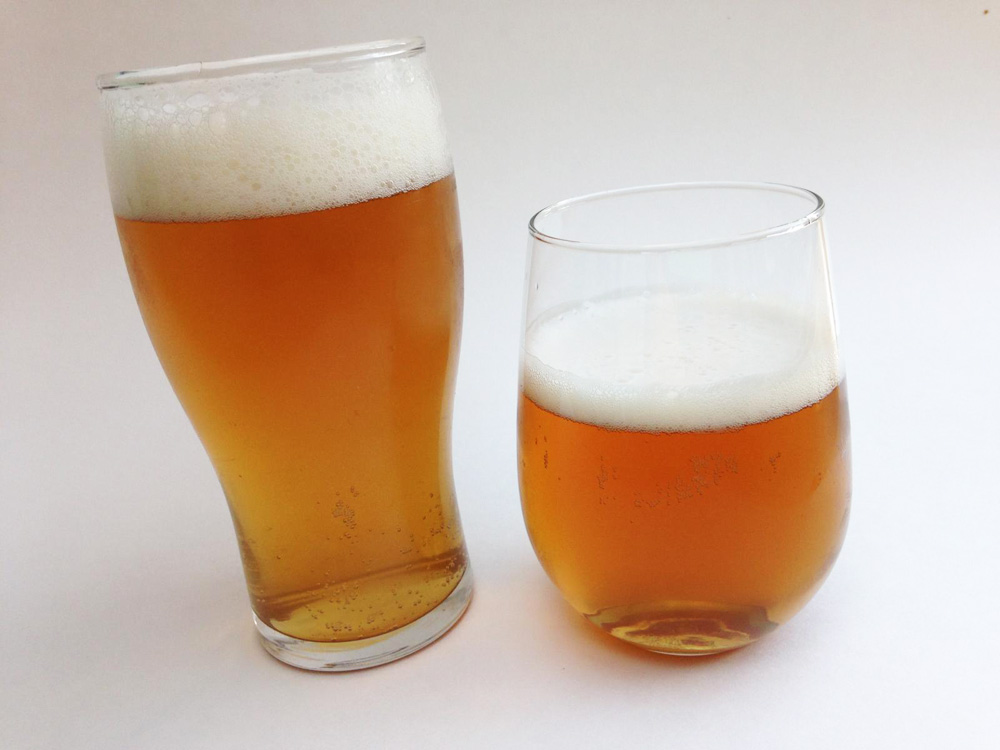 The best part is... Tasty drinkable results.
Lastly, record your results. Perhaps the only thing better than SMaSH brewing for making you a better brewer is note-taking. Also, when you’re done with your SMaSH beers, maybe eat some ribs, chicken and brisket with your friends while you’re at it.
It makes for a SMaSHingly good time.

Love me a SMaSH! So many times, simpler is better!
Just did my first SMaSH on the week-end with MO and Falconers's flight. Though I guess with Falconers's being a blend it only half counts.
Fantastic article! I'm definitely going to suggest the deconstruction experiment to my LHBC.
Good article - I only drink 3 types of beers ...... Stouts, Porters, and IPAs. I can make a smash IPA, but I don't know how I'd make the others ;>). I have a recipe for a Simcoe IPA, I'll have to try SMaSHing that and see how it compares to my 'normal' one!
Thanks
MT2sum
You can do a Smash dry stout using Pale malt, flaked barley and roasted barley; the latter two haven't been malted, and are adjuncts.
We were just discussing this last night at our HBC meeting ... brewing a batch with a even bittering charge then splitting the whirlpool/hop stand into 5 one gallon pots... each with a single hop... then dry hopping with same hop.
great article
I've been doing several smash beers and I think it's a great way to do things. I'm doing it mainly to discover the various hop varieties. Mosaic is delicious all by itself with plain 2-row.
Mosaic...yes, yes it is! Also so is Nelson Sauvin!
I would like to try out some more SMaSH brews, would love to get the characteristics of quite a few hops clearly in mind.
One question from the picture https://cdn.homebrewtalk.com/wp-content/uploads/2016/04/SMaSH1-F.jpg , did you add any adjunct grains to these? I'm curious how you can get an orange hue to your brew from using just a 2-row type grain.
Vienna and Munich should work to get a darker color. I think both can self convert.
Yes, Munich, Vienna, as well as a number of others such as BestMalz RedX have enough diastatic power to convert themselves...
I love munich and vienna smash beers, as the local finnish malt company sells both in big bags for little money.
Just buy whatever hops are on sale, basic hop scedule and it has never failed to make a nice beer.
No adjuncts. The pint glass is Pearl Malt and Zythos hops. Pearl is similar to UK malts like Maris Otter and Golden Promise. They are deeper in color than US 2 row because they're kilned longer. The short glass is a tripel (Pilsner) that was boiled for 120 minutes to add color and a touch of caramel flavor.
Galaxy is another wonderful hop all by itself.
Smash is great! Good for learning more about ingredients, but also just a simple way to make an outstanding beer. I have to admit it is frustrating spending so much time designing complex recipes and having your Smash on tap taste better!!! One thing I have started doing is doing two different half smash batches in my kitchen and then combining them into a full size carboy, often with a 50/50 dry hop of the two varieties. Not really a smash anymore, but I found the beers to be really good, and a very simple brew day.
Nice article. Note BIAB is all-grain.
If I were to experiment with single hop for the sake of experimentation, I think I would do extract just for the ease and consistency between batches. I think I could knock out a couple of those in one day where I wouldn't want to brew more than one whole grain batch in a day.
Lone Pint Yellow Rose IPA is a Mosaic/Pilsner smash that is absolutely fantastic. I did a few pilsner smashes this year and they have turned out pretty good. Moving on to other base malts for the next two though.
I didn't know they had a name for this... (^-^)
My brother got me into brewing. I ended up hijacking one of his amazing pale ale recipes and began experimenting with different hops and hopping methods (hops shortage, small pocketbook). While all the results were enjoyable, some certainly stood out - for those we get frequent requests! I'm glad I took notes!
Here's an old thread that lays out tons of SMASH combos:
https://www.homebrewtalk.com/showthread.php?t=336665
Inspirational. Thanks for keeping simplicity at the fore. Got a feeling that beers from centuries ago were brewed in pretty much SMaSH fashion. Nowadays there is a lot of talk about the goal of "complexity" in taste, which to me is only one sip away from "confusion". Getting SMaSH'ed soon thank to this great article!
If you want to have some more fun with this, split your smash batches into separate fermenters with different yeasts. It's a good way to learn the subtle or not-so-subtle differences between 2 or more yeasts.
Did a Citra/ Marris Otter SMASH last month. Came out great!
I've done this (Split 5 gallon SMaSH with different yeasts on each).
So far I've not been able to taste any differences in the batches. It's only a couple of datapoints, and I don't have the best palate. But I'll probably continue this with my SMaSH brews.. There's a lot to learn.
I just did the MO/Citra SmaSh and split it 5 gal with WL San Fran Lager Yeast and 3.5 gal with WL 001. Both were good, but the lager didn't clear as well as expected.
You must log in or register to reply here.
Share:
Facebook Twitter Reddit Pinterest Tumblr WhatsApp Email Link