Rise of the Gruit

Gruit…what is it? Well for those of you who are unfamiliar with this term, it represents an entire forgotten past of brewing. For thousands of years humans have been brewing with whatever they could get their hands on. Before the 14th-16th century that included an extremely wide variety of spices, herbs, and grains. I’m sure hops were used occasionally but they weren’t the staple ingredient they are in beer today. It wasn’t until the 20th century that we started realizing the preservative properties of hops. After this, it only made sense to use them as a standard in modern day brews.
Thanks to the effort of the homebrew and craft brew brewery community, Gruit has made a come back of sorts. It’s still on the slow rise but I’m sure we’ll see some of the big breweries take on mass production of Gruit at some point (some have fooled around with them but I’ve never seen one stick around for long). I myself stumbled onto Gruits looking into brewing a beer without hops, not knowing that it was already a thing. After a lot of research, I knew one thing was clear: I was diving into less known waters. Due to the wider variety of ingredients and tastes, it was hard to gauge how certain ingredients at certain amounts would taste, as I’d never really dealt with some of them before. Yarrow, sweet gale, mugwort… “what the hell is this stuff?” I thought to myself. Naturally I ended up trying them all on their own, some in teas some just straight. First off, don’t chew mugwort. It’s basically like chewing on woodchips (I’m not really sure what possessed me to do so, as it looks like woodchips...). The only way to really get a feel for what some of these taste like is to just try them yourselves. I found myself at a local whole foods store in the bulk spice and herb isle picking up all kinds of random stuff I’d never heard of. This is also how I found how dead sea salt is not to be eaten…


What to Use in Place of Hops? 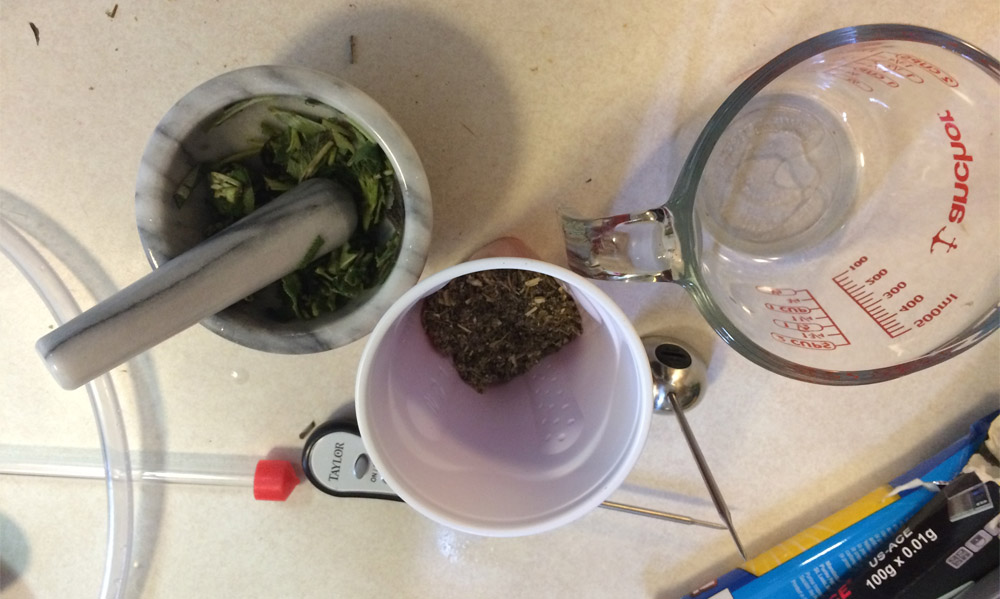 preparing sage for use in my gruit
To give you a little bit of an idea of what a Gruit recipe may have used, let’s take the Viking culture as an example. The Vikings may have used a wide variety of ingredients in what was known as grog at that time, but here are some possible ingredients they would have had access to: honey, wheat, barley, local fruits such as lingonberries or cranberries, and whatever herbs they had on hand. Possibly bog myrtle, yarrow, or juniper berries. The idea was to use whatever you could to make a sugary liquid, try to bitter it, and add flavors using herbs and fruits. After reading a few books on the subject it seems most were fermented from a spoon they used repeatedly for brewing which allowed the transfer of the yeast. Probably mostly open fermentation occurred. From this we can modernize the technique, and widen the range of ingredients, leaving room for unlimited possibilities!
Just as an example, listed below are some of the common ingredients I found to be used in Gruit.
The list goes on and on. Just like hops, you would add them at different points during the boil to either get bittering, flavor and/or aroma, although not all of them serve both functions of course. The big difference is some of these herbs can have a psychotropic or stimulant affect if used in a certain way. For instance, wormwood is one of the main ingredients in the original Absinthe which gives it the “trippy” affect. Sweet gale also has a stimulant affect if used at flame out or “dry hopped”. Cultures throughout history made these for medical reasons due to these affects. The trick with this is finding out how much is too much of something. Some of these ingredients such as wormwood or Labrador tea could be fatal if overused. With these things I feel it’s best to use a small amount, or use them in a manner where you aren’t getting any of that extra affect, unless you know for sure what you’re doing. This part took a lot of researching as well.

boiling the gruit with sage additions in a hop bag.
After looking into all of this and finding some base recipes, I decided it was time to brew my own. The biggest hurdle was what to brew. With so many options, I needed to decide what ingredients to use. The grain bill wasn’t difficult, but the herbs and spices took me some time. I finally decided on a Sage Gruit. After trying all the herbs/spices I could get my hands on, I picked mugwort as my bittering agent. I almost went with wormwood but it’s very strong, and I didn’t want to overwhelm the bittering aspect. I find sage rather pleasant so it seemed like a good starting point.
With my ingredients chosen, I’m ready to dive into a new brewing territory, and then I realize… how much of this stuff am I even to use? I had tasted all of it, but never used it on a scale larger than a tea cup, and even then how would these flavors hold up after fermentation and aging. After doing a little more research on how much was used in other recipes, I came up with the amount I was going to use. I also decided on just doing a gallon batch with these, as I didn’t want to dump more than that if I had to.
Brew day was here! I decided on a four addition schedule. I went with a 60-minute boil and added my first round of sage . At the 45-minute mark I added my mugwort in a hop bag. At 20 minutes I went head and added my second round of sage. And finally, at boil out I added the last of the sage. In total I used about 1.7 oz of sage, and .60 oz of mugwort during the boil process. I chilled the wort, took a hydrometer reading (1.060), transferred the wort to the carboy, and pitched some S-04 yeast. I tasted the hydrometer sample and it was interesting, in a good way. It was very mild and not aggressive at all. My first thought on it was that it could have used more sage. I figured I’d take a taste once it was done fermenting and see how the flavor held up.
After 2 weeks of pretty active fermenting, I was finally ready to move on. While waiting for it to ferment, I started tinkering with the recipe again, and thought it would be interesting to add some oak flavor to it. I had some Jack Daniel’s oak barrel wood, so I figured why not. I ended up soaking the barrel pieces in some single barrel JD’s to get them ready for secondary. After another reading (FG 1.022) and tasting, I decided it needed more sage flavor. However, the mugwort bittering seemed pretty spot on. I ended up racking the Gruit into secondary, and dry hopped with about another ounce of fresh sage. I also added the JD barrel chips. I didn’t use many, as I wanted the flavor to be subtle. I let the Gruit sit in secondary for about a week, and decided it was time to bottle.
I ended up with 11 and a half bottles worth. I of course just ended up trying the half bottle. I thought it was a bit sour from just coming off the oak, but I knew that would fade with time. I primed the bottles and let it sit for 3 weeks.
Here it was, the day had come to finally try my first home brew Gruit (I was way too excited for this). I cracked a bottle open, which was perfectly carbonated, and took my first taste. The oak had faded quite a bit, but it could probably use another week or two of aging. The sage was very pleasant and not overwhelming, and the mugwort added a nice mild bitterness. I’m interested in seeing how these flavors develop over time, so I continue to try one every few weeks or so. The flavors have slowly started to develop. The oak has faded and now it’s just subtle notes. The sage is the dominant flavor, and the mugwort still holds its mild bitterness. Overall I’m liking it more as it ages. Since then I’ve brewed another 2 Gruits including a lavender grapefruit Gruit, and a Gruit/Braggot type brew. As far as brewing goes, I feel like I’m in foreign territory. Although there is some information out there, there really isn’t a lot of it, considering the available information on beer, meads, wine and ciders. Hopefully with the rise of home brewing, we’ll see this forgotten piece of brewing history take flight once again. 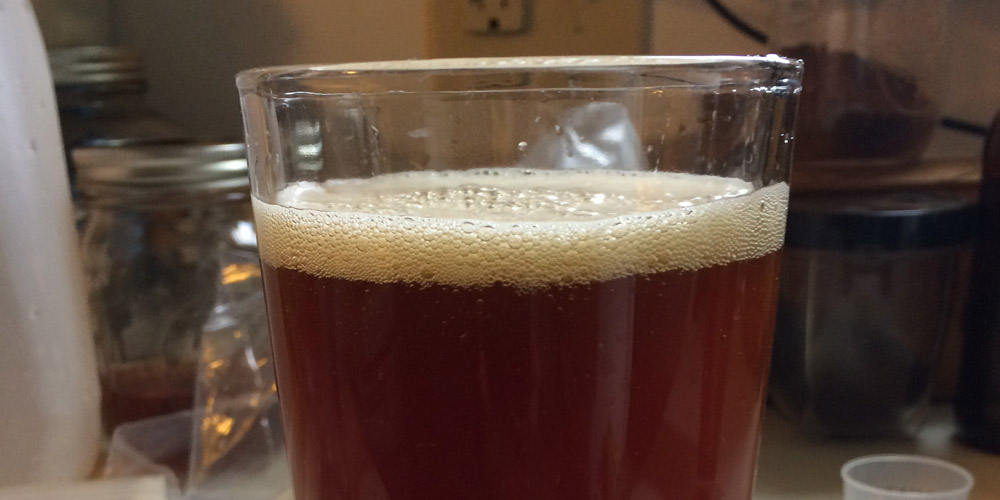 finished sage gruit
If things go right, I may be opening a brewery sometime next year, and will be focusing on Gruit as a part of that. I really want there to be more information and more brews out there for the beer community to try, and if I have to, I’ll be the one to do it! All I can say is it’s been a rewarding experience to learn, and continue to learn, about the lost art of brewing Gruit. For anyone interested in getting into brewing Gruits, I highly recommend you do as much research as possible. I also suggest once you find an herb/spice you like, if it’s doable for you, then grow it yourself! There is limited information out there, but there are some websites and books that really helped me out. ( https://denardbrewing.com/blog/post/gruit-mead/ http://www.gruitale.com/rec_modern_gruit.htm https://yearofgruit.wordpress.com/, and the book Sacred and Herbal Healing beers: The secrets of ancient fermentation
After that, it’s all trial and error. So to all the current brewers and future brewers of Gruit out there: good luck and brew on! 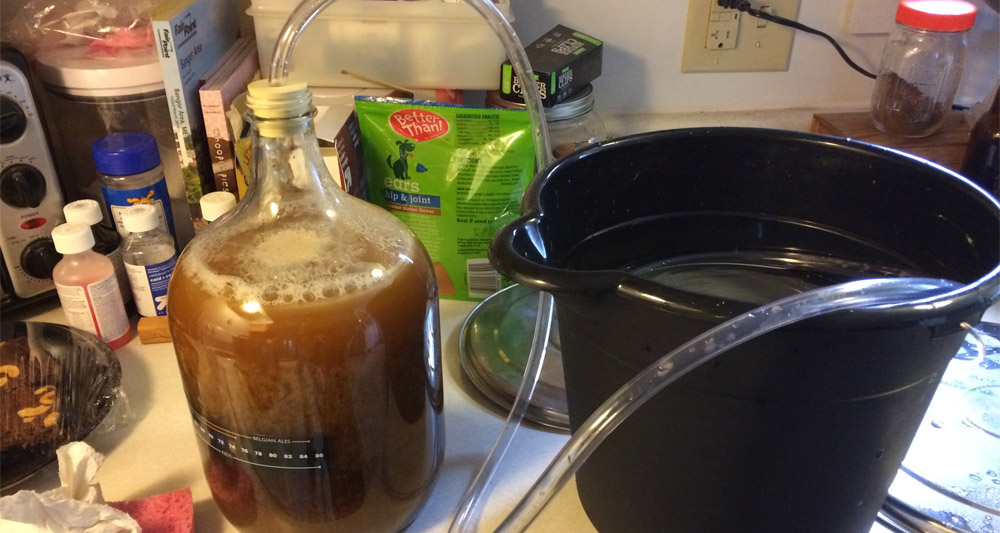 A
The HomeBrewTalk Top Recipes - Part 1

Jul 2, 2015
austin
A
K
There's Nothin' to it but to Brew It! Developing your own Homebrew Recipes