It wasn’t that long ago that if you had offered homebrewers and craft beer drinkers a low-impact, low-alcohol beer with approachable flavor, they would have scoffed. Real beer was meant to be big, bold, adventurous, and preferably have a sizable ABV (Alcohol by Volume).

Oh, how times have changed. These days, beer lovers recognize that there is a welcome place at the table for flavorful, low-impact beers that can be enjoyed over a long session without worries about going overboard.

Brews like this actually have a long and rich history, with the very concept of “session ales” or “session beers” springing from the British pub scene. They were popularized in the U.S. craft scene thanks in no small part to Founder’s All-Day IPA, among others, and now they are ubiquitous.

But before we get into that we’ve got to answer the big question: What the heck is a session beer, anyway? 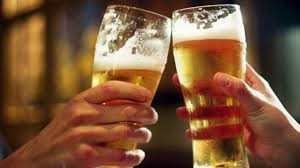 There is some debate and wiggle room on the specifics, but the basic gist is easy to understand: a session beer is one that is low in alcohol without sacrificing flavor, thus you’re able to drink several in a “session” (or you can “session” it, if you’re as fond of verbing nouns as I am) without getting too tipsy while still enjoying the taste of a great craft beer.

Beer historian Martyn Cornell says the term had likely been in use first in 1982, by famed beer writer Michael Jackson, and in 1988, in a British publication. (source) By 1991, it began to appear more often in print, including in the magazine Institute of Practitioners in Work Study, Organisation, and Methods, and in On Tap: The Guide to US Brewpubs.

The history of the style goes back much further, of course, extending to the days of “table beers,” low ABV beers usually around 4.5% commonly enjoyed around Belgian dinner tables.

The common wisdom passed around on certain popular beer sites is that the term “session beer” originated during World War I, when British pubs were only open for short blocks, or “sessions,” at a time due to war restrictions. However, Cornell suggests the evidence of this is shaky, with the first references to these “lunchtime sessions” and “evening sessions” not showing up until several decades after the war.

Even the definition of the term itself has been a little murky. For a time in Britain, session ales were considered those no higher than 4% ABV. In the U.S., beer writer Lew Bryson launched his Session Beer Project in 2007, arguing that session beers are “flavorful” brews that are 4.5% or lower. (source) And still others insist that session beers can climb to 5% ABV.

It’s currently quite common to refer to any flavorful craft beer under 5% as a “session beer.” There had been some early experiments with them in the American craft world, but it wasn’t until 2010, when Founder’s began tinkering with a recipe for a high-impact, low-alcohol IPA, that they really took off. Those experiments resulted in All-Day IPA. It was hardly the first craft session beer, but it was arguably the first to spring to wide popularity. The beer was a regional hit, suggesting there was a wider demand among craft drinkers for good tasting beer that didn’t leave you reeling after a few. (source) A few breweries followed suit, and lower alcohol beers that still tasted great soon began to appear on shelves. In 2014, Founders introduced their 15-packs. They were a huge national success, pushing the session trend from a niche to an explosion.

Today, it’s easy to find great craft beers with big taste and manageable ABV levels. And naturally, this has extended to homebrewing, where brewers have found ways to pack a lot of flavor into a beer that won’t knock you down.

Okay, so we know what a session beer is. But how to brew a good one? That’s the trick.

For some, coming up with a good recipe from scratch can be difficult on a good day. Throw in the challenges of the session beer – flavorful but easy to drink, low ABV, able to be consumed without taste or alcohol fatigue – and it’s an even more difficult trick.

First, you have to know what you’re looking for. When designing your session beer recipe, you’ll want to ensure it touches on these key features:
-A low alcohol content, obviously
-Good enough flavor to be appreciated by attentive drinkers, but not so much that it's impossible to ignore. A good session beer tastes great but can fade into the background when necessary.
-A moderate body. A good session beer should never make you feel full or bloated, but it also should not be too light.
Those parameters give you a ballpark within which to work, but they’re hardly constricting. It’s a huge ballpark. While the session IPA has gotten the most attention, hobbyist and pro brewers have made great session ales of saisons, stouts, wild ales, and more.

Here’s how to think through your recipe:
-Determine the key characteristic you want (fruity hops, saison Earthiness, a kiss of chocolate, sourness, etc.)
-Determine what delivers that characteristic in a “full-sized” version of the recipe, e.g. a standard IPA (a strain of hops, a specific yeast, a distinctive grain, a special ingredient). This is what you want to shine through the relatively small grain bill you’ll have.
-Choose your malts. For base malts, choose Maris Otter, Munich, or Vienna for a beer with flavor and a lighter, drier body, or Biscuit for a fuller body.
-Simplify wherever you can. Your grain bill doesn’t need complexity. Any more than two specialty grains is probably too many.
-Calculate your grain amounts, either scaling down from an existing recipe to meet your intended ABV, or building up from some basic grains.
-HOWEVER, scaling is not linear. Don’t just take a recipe for an 8% beer and cut it in half. Prioritize specialty grains, because that’s where the flavor is, and make the deepest cuts to simple grains and fermentables.
-Formulate your hops bill. Scale to your grains. Be more judicious in scaling down bittering hops but feel free to be generous with end-of-boil hops, if you’re brewing a hoppy beer.
-Simplicity is key, especially for flavor and aroma hops. One hop with a distinctive flavor will shine through nicely.
-Select added ingredients (fruits, herbs, sugars, etc.), if any. Remember that these will shine through stronger than usual, so be sparing. Restraint is in order with session beers.
-Eliminate simple sugars when you can. These are good for boosting alcohol content while retaining a light body, but that’s often (though not always) the opposite of what you’re aiming for with a session beer.
-Pick your yeast. Remember that this beer is likely to ferment more cleanly than others, so consider yeast strains with more assertive characteristics. This will help add needed flavor and complexity.
Once you have something that resembles the kind of beer you’re looking for, it’s time to brew. 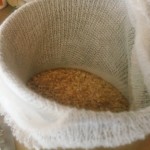 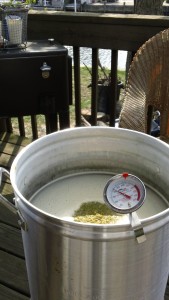 Remember the goal of a session beer: you’re not brewing a light beer, you’re brewing a low-alcohol beer that still has full flavor.
Before we wrap up, here are a few recipes to give you some ideas – but remember, they are only suggestions. Use them as a starting point for your own inventions. Give them a try, or tweak one of your own to create a perfect session brew. Happy brewing!

Specialty Grains:
1lb Caramel 60L
8oz Flaked Wheat
Other Fermentables:
6lbs Gold LME
1lb Golden Light DME
4oz Simple sugar (optional, for lighter body)
Hops:
60 Minutes - .5 oz Chinook (alternative: 1 oz Perle)
15 Minutes – 1oz Sorachi Ace
Dry-Hop – 2oz Sorachi Ace
Yeast: US-05
Notes: This recipe is designed for 8 gallons. If you do not have a larger kettle or carboy, brew as you would a 5-gallon batch, then top to 8 gallons, splitting it into two fermentation vessels. Dry-hop with 1oz in each.

E
Eric San Juan
Eric San Juan is a freelance writer, former craft beer columnist for the Philly Weekly, and author of several books, including “Stuff Every Husband Should Know” (Quirk Books 2011). His musings on beer, life, nerd stuff and more can be found at ericsanjuan.com. You’ll often spot him drinking good beers on his nerd nostalgia Youtube show, https://www.youtube.com/user/SneakersAndSoul. Eric thinks gardening is a logical extension of homebrewing and urges you to plant some fruits and veggies this year.

Thanks. Interesting and informative article. Goes well as I'm reading "Session Beers: Brewing for Flavor and Balance" by Jennifer Tralley (Brewers Publications).
Probably chastised for writing, but, I'll take a "Session Beer" any day. With a session beer I can enjoy more than 1.
Great reference to British styles (milds, I assume) and Founders, which is in my opinion, one of the best breweries in the Midwest.
Founders has a good reputation with several popular styles but they got my attention with their Solid Gold lager, a beer that fits the session description the author put across in the article. The beer is nicely done with a little "extra" color, flavor, and aroma you'd expect from craft beer - except the extra alcohol. Brewmaster Kosmicki's interpretation of that beer really is "solid gold" where "less" can be a first choice for those who appreciate a good beer. You shouldn't have to compromise on "less filling" or "tastes great" if you know what you're doing.
Yeast also has a big effect. Low attenuation vs high attenuation. If you prefer simply play with a brewing calculator. For example, White Labs English Ale yeast produces about 20% LESS alcohol than San Diego Super Yeast. To put it another way, can turn a 5% ABV into a 4% ABV simply by changing the yeast (although there will also be changes to taste, mouth feel, etc).
There is a most excellent "Sub 1.030 beers" thread that has a lot of tips, tricks and recipes that should be very helpful if you're interested in Session beers.
This is more for drinking sessions, but I find rotating from one beer to another is much better than drink the same one, glass after glass.
In fact, people tend to think that each session beer in a rotation is better than the last, even when they repeat earlier ones. I think it's because changing the hop flavor complements the prior one, but it could be a temp issue or even a boredom thing being more prevalent with blandish sessions.
Founder's All Day IPA is my go-to when I run out of homebrew. I typically keep one session beer and one that is either high ABV or a dark beer. The session beers are easy to brew and share. Your friends are less likely to drink your wee heavy on the first go around.
Good article, with lots of practical suggestions. I have to give Full Sail Brewing in Hood River Or. a lot of credit for popularizing the term "Session." Hood River is a wind surfing mecca and we called sailing for part of a day a "Session" before craft beers were around. Full Sail called their delicious full-bodied lager "Session." (probably trademarked). I think it was no coincidence that they named their "Session" beer with the Label "Session" after a windsurfing "Session."
Thanks for the article.
What's your opinion on how to keep your session beer from tasting "watery?". The beer I have carbonating at the moment is a simple brew which is very lightly hopped using witbier yeast. This batch is about where it is going to be, but I might try this again and can make adjustments.
You can boost the body with things like more caramelized malts adding in unmalted grains, higher mash temps and modest yeast strains.
Good article !!! Thanks for sharing this blog..I really enjoyed it. This blog make me aware of diffrent drinking session that has a lot of tips, tricks and recipes. Please keep sharing.
Really good article, I'm planning to make my home made beer also. Wanted to try it just experience.
You must log in or register to reply here.
Share:
Facebook Twitter Reddit Pinterest Tumblr WhatsApp Email Link