I think it is way more frustrating to not know what ruined your batch of beer, than actually losing the beer itself. It always makes your next batch feels like a gamble. Am I going to waste $40 and 8 hours of work again? How do I avoid making the same mistake when I don’t know what went wrong in the first place? A common problem (especially among newer homebrewers) is having a bucket of wort that never even starts fermenting. Here are some common reasons and solutions for this popular ailment. Pun intended. You’re welcome.


Check That it Really Isn't Fermenting

Bubbles in your airlock aren't a good way to judge if fermentation is happening. The best way to check if your beer has started fermenting is by taking a gravity reading. If your measured gravity is the same as your original gravity after a couple days, then your beer never began fermenting.
That being said, if you do use bubbles in the airlock to get a rough estimation of if fermentation has started, and it isn't bubbling, check the seal between the bucket and the lid. The last time I had no bubbles in my airlock after 3 days, I pushed down all around the edge of my lid to make sure it was on tight and sure enough my airlock started bubbling steadily. It didn’t click into place or make any reassuring movement, but apparently there was a small leak somewhere that air was escaping through rather than my airlock. I now FIRMLY put on my lid every time.
Don’t confuse this with pushing in the center of your lid, because it will just flex and push air out of your bucket. Then when you stop pushing, air will get sucked back into your bucket along with the sanitizer in your airlock. I’ve seen a similar issue with stoppers in my carboy or the 1 gallon glass jars that I occasionally use. If the inside of the neck gets wet, the stopper can slowly slide up and will just sit on top of the neck (see pictures below). This is much easier to see but can still create an air leak. Any other leaks from an airlock grommet or cracked stem on an airlock can have the same effect. The airlock will only bubble if pressure can be built up inside a well-sealed vessel. Now let's move forward with the knowledge that your beer actually isn't fermenting after confirming with a gravity check. 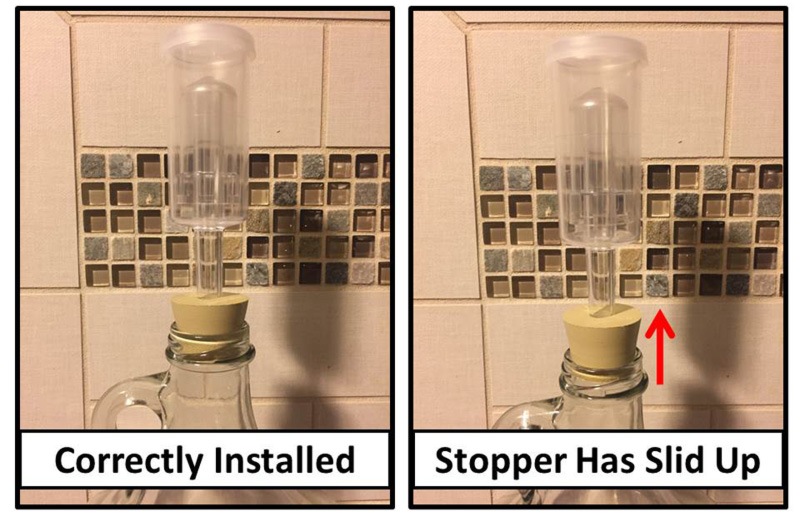 One of the most deceiving problems can be not having a problem at all. Sometimes it seems like your wort isn’t fermenting because the airlock isn’t bubbling, but you need to dig deeper into the problem. If you’re using a bucket, open it up and look inside for a foamy head or a ring of crud above the beer’s surface. A foamy head rises when the beer is vigorously fermenting (called a krausen) and it leaves a ring of junk on the wall when it falls back into the beer a couple days later. Try holding a flashlight against the back side of my bucket to see this ring of crud without opening my fermenter. If the krausen is still there though, this method doesn’t work very well since the foam is dense enough to just look like beer. All of this is easier to see in a clear vessel of course.
You'll also noticed that when you fill a 5-6 gallon bucket with only 3 gallons of wort (for a half batch), your airlock is very slow to begin bubbling compared to when the bucket is full. With less wort in the bucket, less gas is produced and it has twice as much head room to fill before presuure forces bubbles out of the airlock. There just isn’t as much gas trying to escape the bucket with smaller batches. This can easily be misconceived as a stalled fermentation if you’re judging by a lazy airlock alone. Since so many factors control airlock activity, you shouldn't really use it as a measure of something not fermenting. Now let's troubleshoot some more.


Did You Add Your Yeast?

You’ve brewed your beer, pitched your yeast, and now you’ve been patiently waiting for a few days to see the fireworks show known as active fermentation. However, you never see any bubbles, no krausen, and the gravity is unchanging. Let’s start off with the obvious. Did you remember to add yeast to your fermenter? A couple of times I’ve been so involved in cooling and aerating my wort that I’ve forgotten to actually pitch my yeast. Luckily I always have my yeast starter warming up on my counter during the brew day, so while I’m cleaning up I’ll notice it still sitting there and go pitch it. No harm, no foul.

If you’re certain that your fermenter is sealed up well and your gravity hasn't shown any signs of fermentation, it’s time to look to your yeast, or specifically, the temperature of your wort the yeast are in. Since yeast are living organisms, they can be affected by good and bad conditions just like humans would be. No your Brettanomyces isn’t sad because it broke up with its long time crush Hefeweizen yeast, but the environment they work in can absolutely affect your beer. If the temperature is too cold for the yeast, they will become dormant and fermentation won’t start. On the other end, if the temperature is too hot, the yeast can be killed off permanently (generally around 95F). Like humans, every yeast strain has a temperature range where it’s comfortable working. In general, lager yeast likes to be around 55ºF and ale yeast around 68ºF. Deviating too far from the recommended temps could leave your yeast useless, or produce a lot of off flavors. 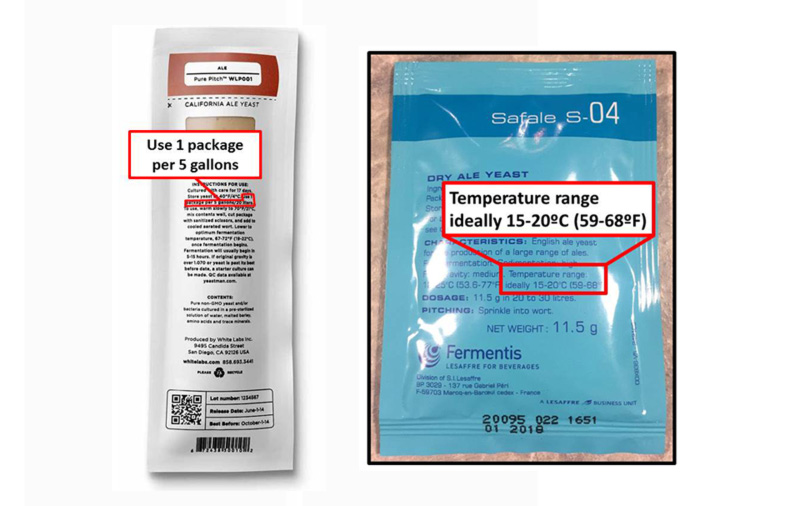 Another factor to consider with your yeast is the pitching rate. Most of the yeast packets, tubes, and pouches used for home brewing say that they’re ready for any 5 gallon batch of beer. This is not always the case though. If you’re making a high ABV beer, a lager, or a batch larger than 5 gallons you will want to use more yeast. Failing to do so can leave your yeast overwhelmed and lower your chance for success. I’ve seen varying numbers for how much yeast is needed and what OG is considered high ABV, but the well-known yeast suppliers have information on their sites to help you. For instance, White Labs’ site recommends pitching 1 yeast pack for a 5 gallon batch of beer with a starting gravity below 1.048 (see table below). If the starting gravity is 1.050-1.065 they recommend 2 yeast packs or making a 1 liter yeast starter. Finally, if the starting gravity is above 1.065 or you are pitching in a lager that’s below 65ºF, you should use 3 packs of yeast or create a 2 liter yeast starter. All of those examples are for 5 gallon batches, but depending on the type of beer you’re making you may need 3 times the yeast for a reliable fermentation! Those pitching rates are posted by the yeast masters themselves to help you succeed. Aerating your beer before fermentation will also help you get the most out of your yeast. Oxygen fuels yeast growth and healthy yeast will be able to ferment your beer better.

At this point you can try pitching more yeast to see if you can jump-start your fermentation, but the best way to solve these issues is prevention. Make sure your yeast is viable, you’re using enough for the type of beer you’re brewing, and that the wort is at an appropriate temp. Cheers! 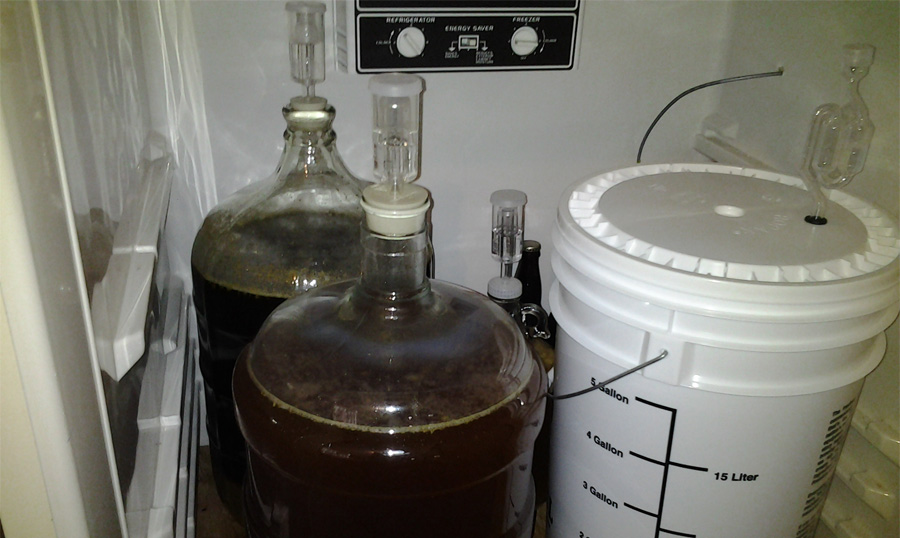 Thank for clarification. I have always heard the under 1.060 just use the packet or vial. Above 1.060 make a starter. Every time I have made a starter my fermentation's seem to start quicker and more consistent. Any recommendation on what the gravity of the starter should be? I have always heard 1.040ish??
R

From what I've read elsewhere, 1.040 is supposedly optimal.

Unless I'm in a huge rush I always make a starter with liquid yeast. You can reassure yourself that the yeast is still alive and if it's a bit older you are rebuilding the cell count to where it should be. A pack of liquid yeast has ~100 billion cells when it leaves the factory and they start to die off from there. A 1.055 SG wort should get 190 billion cells to pitch at 0.75 million cells/mL. So even a brand new pack of liquid yeast would be under pitching a 1.055 SG wort without a starter. Starter gravity should be 1.037 - 1.040.
http://www.brewunited.com/yeast_calculator.php

If I must use liquid yeast, I like the smack packs because it inflates over about 3 hours after you smack it and that tells you the yeast is good and healthy

Good article, thank you. One thing to add, because I use a lot of dry yeast, is that you DO NOT want to re-hydrate dry yeast more than 15 minutes before pitching. I've had brew day interrupted many times and the yeast croaks because it's just sitting in water. It's disappointing to re-pitch a couple of days later wondering if it's the yeast or something else.

Using a rehydration nutrient such as Go-Ferm will help you avoid this....
J

Also, make sure that there is enough liquid in your airlock. I sometimes use starsan in my airlock, which foams a little when poured, and by the time the foam settled there wasn't enough liquid to actually seal the airlock.
M

Make a 2000ml starter per 5 gallons of wort for every batch, keep the temp right and you will never have a problem.
I do this for every batch that I brew now and have removed all doubt about whether or not my fermentation is going.
T

I found another reason for lack of fermentation can be due to the pH of the wort being too low. I added about a quart of carmelized honey to a 6 gallon batch of Nut Brown Ale and found the pH was reading 2.9. The yeast were not able to get going at this level of acidity.
After adjusting the pH with calcium bicarbonate, calcium carbonate, and sodium bicarbonate in steps, I was able to get the yeast to begin working.
Here is a thread of something similar-
https://www.homebrewtalk.com/showthread.php?t=464007
B

So here is my stumper. I pitched with safale us-05 at 76F. My OG was 1.043, lower than I wanted due to a poor mash. The place I have kept it in has been warm and it has been 3 days without fermentation. Any ideas why? I tried swirling the carboy a little and I added more yeast. Still nothing. Thoughts?

Fermentation never started... :'( What to do

Super fast primary fermentation, is this even possible?