The idea to upgrade to an all-electric brewery started 2 years ago after seeing some similar systems on several forums, including Homebrew Talk. I’ve been brewing for close to 10 years now, starting as most did: with extract in a single pot on a propane burner. When I moved to CT, brewing became a bit more seasonal; it was cold enough that I didn’t want to freeze outside while brewing. There were days that would accommodate a brew, but I found myself brewing much less during the winter. So the idea of brewing in the garage was born and electric brewing was the way to do it safely. I also wanted to be able to brew 10 gallon batches when needed, therefore part of the upgrade was getting everything one size up from my current setup.
My plan to upgrade was thought out in phases: Buy something that would be usable immediately, but would also help toward the ultimate goal. Most of the purchases were done over a 6-month period to spread out the costs somewhat. In the end, I wanted to end up with 3 x 15+ Gallon kettles, 2 x pumps, a counter flow chiller, a HERMS coil, an electric control panel, ULWD electric heating elements and associated parts to connect everything and make it work. I would be remiss not to mention that The Electric Brewery was a HUGE influence on my design. Many thanks are owed to Kal for being such a great resource for a project like this. 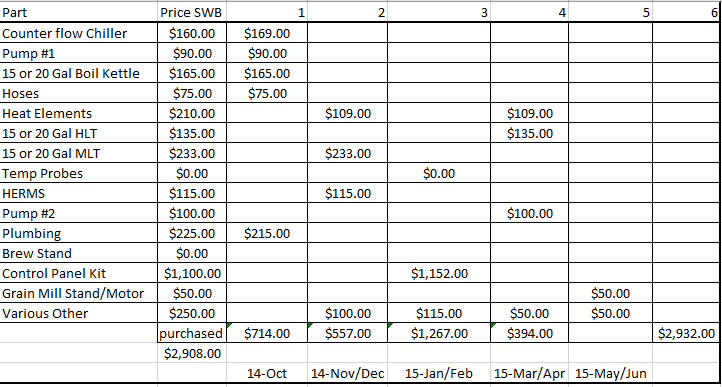 The build started with Phase 1, a single larger Kettle. After a lot of searching, I decided I needed at least a 15-gallon Boil Kettle and I wanted it to be the ‘ideal’ size ratio (1.2 to 1 height to diameter ratio). For the price and features of the available pots (more have since come onto the market) I went with a Bayou Classic 16 Gallon stainless steel kettle. It was a bit larger than my minimum size, had a 1.25 to 1 height to diameter ratio and had volume markings pressed into the side. This could be used immediately with my existing propane burner, 10-gallon water cooler Mash/Lauter Tun and 5-gallon water cooler Hot Liquor Tank for all-grain brewing. I still needed a better way to cool the wort--especially when doing 10 gallon batches--so a counter flow chiller was the option I went with. It could utilize the pumps I intended to include anyway and was easier to clean than a plate chiller, while also having the capacity to cool a lot of hot wort quickly. To complete ‘Phase 1’ I needed a single pump, hoses and hardware to connect it all.
After a lot of searching, I purchased a Chugger ½” pump with plastic head on sale. It was a reasonable value and performed as well as a March pump according to reviews. There were a lot of choices for the hoses I needed, but they needed to be flexible, heat-resistant and--if at all possible-- translucent. Silicone tubing ended up being the best fit; this isn’t the cheapest choice, but this build was designed to last for quite a while so it seemed worth the initial investment. The last piece of ‘Phase 1’ was hose hardware...how to connect the hoses to the pumps, chiller and kettles. I found many options, including fancy one-handed quick disconnects, twist locks and Cam locks. The cam locks seemed like the best compromise between price and function, they were all stainless steel, quick-disconnecting and not crazy expensive.
Stepping up from SS cam locks to SS quick disconnects (like an air hose disconnect) would have nearly doubled the line item cost for them. At this point ‘Phase 1‘ was done, and the system was ready to assemble. All that was required was to assemble the hoses; The Electric Brewery has a great example of this, and start brewing with the new components. 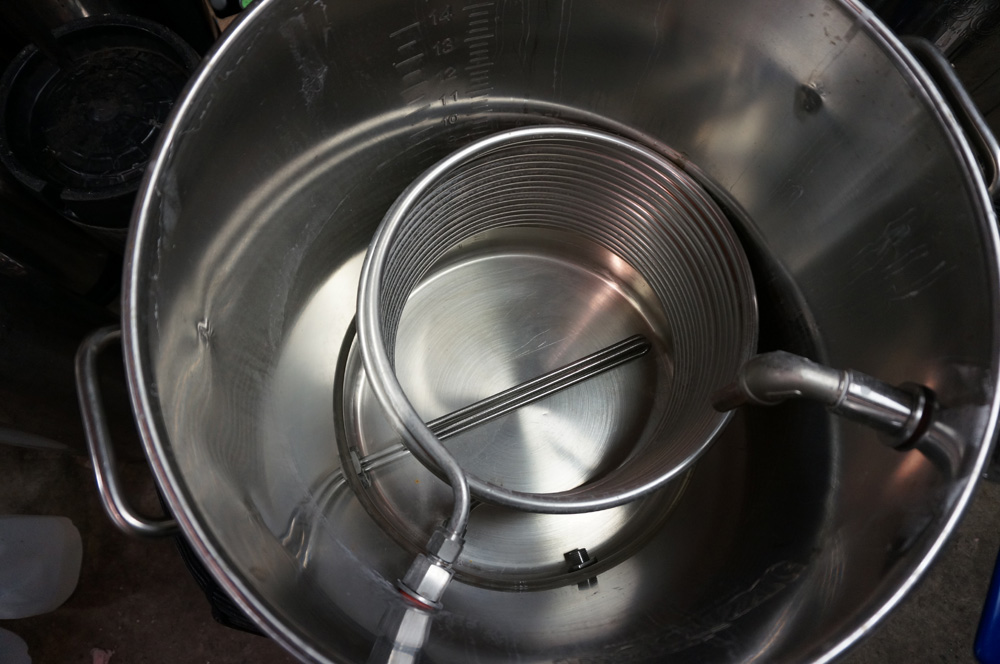 HERMS Setup
Phase 2 was essentially building the Hot Liquor tank and assembling the HERMS (Heat Exchange Recirculated Mash System) coil. Another 16-gallon kettle was purchased, along with a 5500 watt Ultra Low Watt Density heating element kit, the HERMS coil and hardware to assemble. For this part of the build quite a few holes needed to be made to add fittings to the kettles, so it was worth buying a tool to make them all easily and accurate. The best tool for this is a Radio Punch; this makes an accurate, neat hole in the kettle wall. This tool is well worth the money and can be found used on Ebay for reasonable prices. One thing I wish I could have done differently was to better size the HERMS coil. I purchased a pre-rolled 50’ coil online since I wanted to stick with Stainless Steel and that kind of tubing is hard to roll successfully by hand. The Kettle is 15” in diameter and I purchased a coil that was 14” in diameter, this seemed like it would be a great fit. What I didn’t count on was how big the compression fittings that connect the coil to the kettle wall were were, it made for a very tight fit, but did work (barely). In hindsight, I should have ordered a 12-13” diameter coil, to better allow for a little circulation space. The Hot Liquor Tank also got another valve and elbow installed at the top of the pot to recirculate the water while it was heating. The radio punches were used to make the holes for the ball valves and heating element in the kettle. The heating element installs through a 1 ¼” hole, sealed with an O-ring against the outside of the kettle. Once it was installed and leak tested, I filled the void around the element connection with silicone to protect against any possible water intrusion. In the end this wasn’t as hard as it seemed like it would be, the element just had to be tightened down a lot. Once the coil, recirculation valve and element were installed and leak tested the Hot Liquor Tank was done and set aside.

Phase 3 was the control panel. I really liked the one ‘The Electric Brewery’ put together but didn’t have the money to buy it pre-built, so I started a list of parts I’d need to build my own. While doing this, I found an ad in a magazine for exactly what I was trying to do; as it turns out EbrewSupply offered exactly what I wanted: a 30 amp PID controlled DIY kit. It included the enclosure, all wiring, all components, labels and even temperature probes for the kettles. Over the course of a few weeks I followed the wiring diagrams and assembled the control panel. I also had to solve the issue of powering the panel, as it turns out a 30 amp GFCI circuit breaker is quite expensive. The solution was to get a relatively cheap 50 amp ‘spa panel’ GFCI breaker and enclosure, then wire it up to a 30 amp regular circuit breaker in my house’s breaker panel. Nearly everything worked the first time, a testament to the great directions provided, more-so than my electrical skills I think. The control panel included the safety relay feature. This basically won’t allow the main power to energize if either of the pumps or elements is not in the OFF position. So if an element switch is left ON, the panel won’t power up. This will likely save me from burning up a heating element as they are only designed to be powered on when submersed in water. 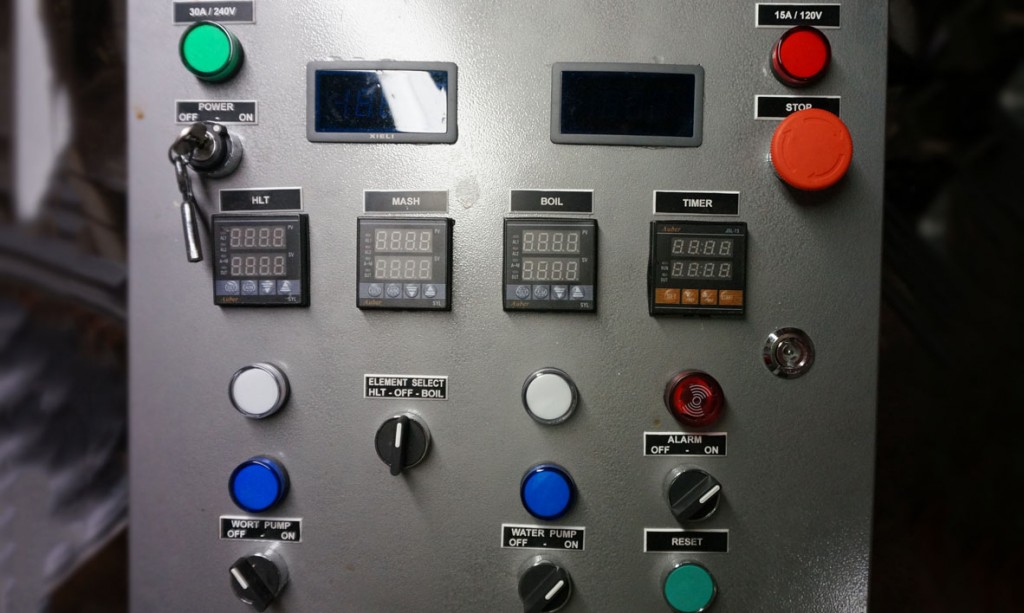 Phase 4 was the home stretch, the last kettle for the Mash/Lauter Tun and the second pump. The Mash/Lauter Tun had only a single extra hole needed for the mash recirculation system so it was by far the simplest to put together. I installed a bazooka T screen on the valve and bent it to reach the bottom of the kettle, this let me siphon down to ½ inch of the bottom of the vessel. This kettle was purchased with the same brand Bayou Classic false bottom. Both the bazooka screen and the false bottom were installed for some extra insurance against grain making it into the pump. The Boil Kettle also needed a 5500 watt Ultra Low Watt Density heating element kit. This was the tipping point for my brewery, once that was installed I couldn’t brew on propane any longer (cords don’t react well to fire). I had to finish the electric brewery build in order to brew my next batch, so there was a little extra motivation to push on and finish.
After phase 4 was done I was able to set the new electric brewery up on a used stainless steel kitchen prep table and give it a trial run. The Hot Liquor Tank PID was calibrated first so that it could adequately control the temperature of the water. The PID actually learns how much power is required to maintain a set temperature based on the calibration cycle. Once that was done it was time for the initial brew, my favorite recipe an American Pale Ale. That first brew went a bit slow as I had to learn the new system but ended in a successful beer, all in the comfort of a warm garage. I did learn that ventilation is still fairly important when brewing with electric indoors, steam can fill a garage pretty quickly. I’ve been brewing on this setup for over a year now and am very happy with the way it turned out. In hindsight I may have changed a few things, such as the size of the HERMS coil, but am overall very happy with my new brewery. 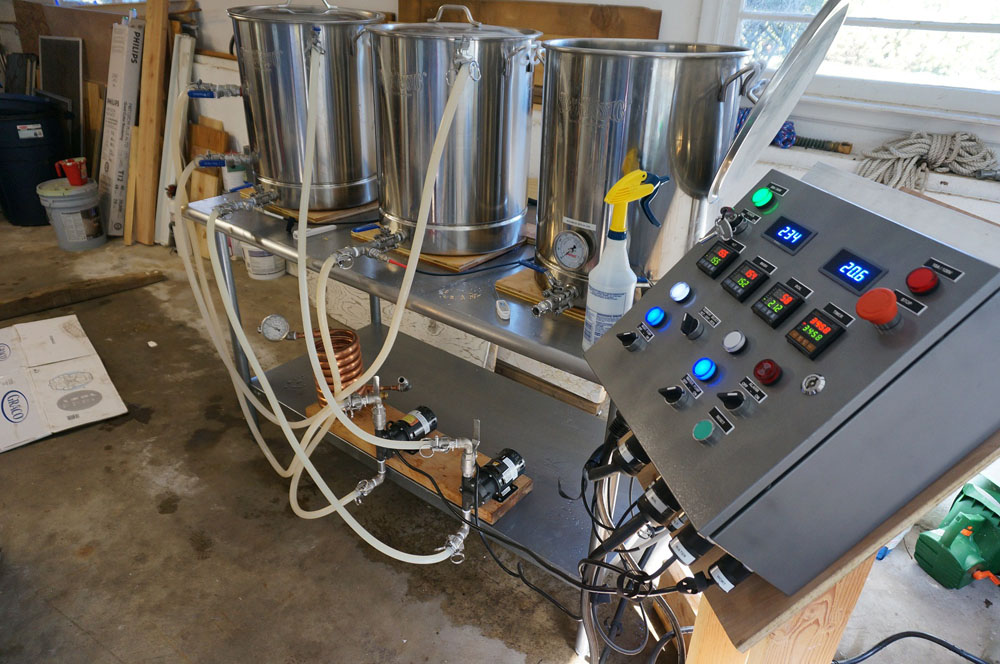