So often we’ve tasted beers that have been over powered by the one ingredient that ends up giving it the hollow single identity so advertised on the label. Whether it is a label illustrating a personified ninja blackberry performing a front snap kick to a pint glass, or strawberry that has been re-imagined as an explosive device; we’ve become accustomed to the constant chase to the extremes many brewers take.
For so long I had avoided brewing any beers with fruit. Not due to a long hard stance with Reinheitsgebot, but due to a lack of respect for any of the beers with the belief that they had either covered up a bad beer with a gimmick, or are trying to appeal to a new demographic with cheap artificial flavorings. I know now that there is a third option that is seeing a renewed focus within the home brewing community.
The idea is to allow the fruit to be just what it is, another ingredient in your beer and not inadvertently make a malted fruit wine. Before ingredients are gathered and procedures altered, you must dream about your beer. What beer is really wanted, a sunny blonde with a simple apricot sweetness? A dark chocolate stout with a strong raspberry influence? There is a whole culinary science with endless flavor combinations, so there should never be a fear of the new. However, a few tips can help bring about new beers destined to become a new home favorite. I had personally fallen into my favorite fruit beer through a miscommunication with another brewer I was joining at a local beer festival. I had all of my ingredients together to make my Octoberfest and I wanted to make a cool clean peach blonde. Just something easy to drink and share while I waited for the lagering period of my Octoberfest to be finished. I asked him, “What do you think I should brew first, the peach one or the Octoberfest?” He responded with, “Why not brew both?”
Now what he meant at the time was to brew one, and then the other in succession for a marathon brew day, but my mind was already swirling on a real fruit beer with a malty backbone. A successful beer on its own, only enhanced by a nice fruit influence. The idea of my Peachtoberfest was born, but what was I supposed to do different to not make a Frankenstein’s monster out of this? Should I just add peach extract after the fact right before it’s served? That’s not really my style and not what I wanted from this beer. Should I buy a ton of peaches and soak them, skin them, pit them and boil the fruit under pressure as to not lose the subtle peach aromatics? Let’s be honest here, I’m not that hard working, and I would just find myself sticky and frustrated.

The best option by far, I felt, was to buy the cans of purée available at local brew supply stores in a variety of options. Vintners Harvest brand was what I had already planned on using in my peach blonde and I thought that was what would have worked well for what I wanted. I already had my grain bill for my Octoberfest, but I knew adding purée would throw off my gravities, so I knew re-balancing was required for a starting lower OG.
• 5 lbs American 2-Row
• 1 lbs Munich 10L
• 1 lbs Crystal 20L
• 1 oz Liberty Hops at 60 minutes 4.6% AAV
• 1 oz Amarillo Hops at 15 minutes 8.9% AAV
• Whirlfloc and White Labs Yeast Nutrient added at 10 minutes
I, conventionality, would read this as a bit backwards with an aroma hop early on and a stronger hop at the finish, but I wanted the bitterness to be low with a nice citrus reinforcement people wouldn’t pick up so easily. I, also, wanted to use a muted yeast strain to really let the peach speak for the beer, so I chose Wyeast 2565 Kölsch. 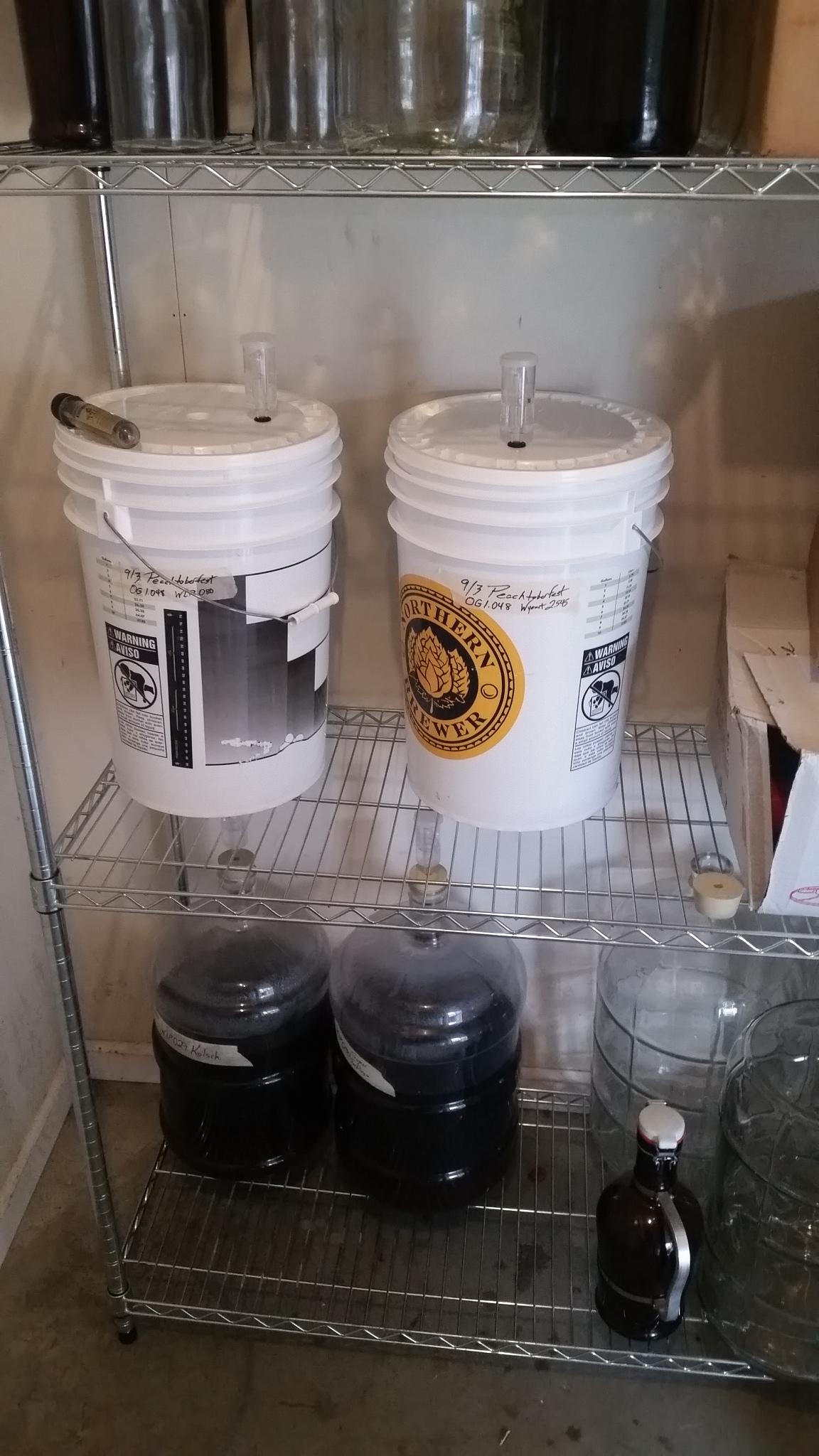 The Peachtoberfest is under way
At this point, the next point of argument was on when to add the fruit purée. Some say adding the fruit purée in the last few minutes of the boil for it to fully pasteurize, minimizing the additional risk of contamination, at the cost of the soft aromatics (which was one of the main reasons for using purée in the first place). Others believe adding the purée to the fermenter during inoculation with the yeast into the wort. While this would have the longest exposure time to the wort, some believe that this may train the yeast to higher levels of fructose, possibly slowing down fermentation and adding undesired by-products of fermentation. I, personally, think this effect is minimal unless you are of the practice of re-using yeast for several batches. Another point at which people tend to add fruit is at high kraussen. Where this wouldn’t affect the yeast as much, I still thought that this would blow off those aromatics we were trying to keep.
Although it is later in the process, it has been seen that adding purée to the secondary is the gentlest and effective way to get the most out of your addition. As long as good sanitary practices are followed, you shouldn’t have any problems as the product is already pasteurized, but I would highly suggest taking the label off of the can and submerging the can, the can opener and any funnel you plan on using in sanitizer before the addition. This may cause a secondary fermentation, but this is completely normal as a small amount of yeast will still be suspended in the green beer. For this reason, it is important to give the beer a little additional time, a week or so more, to your usual secondary schedule. 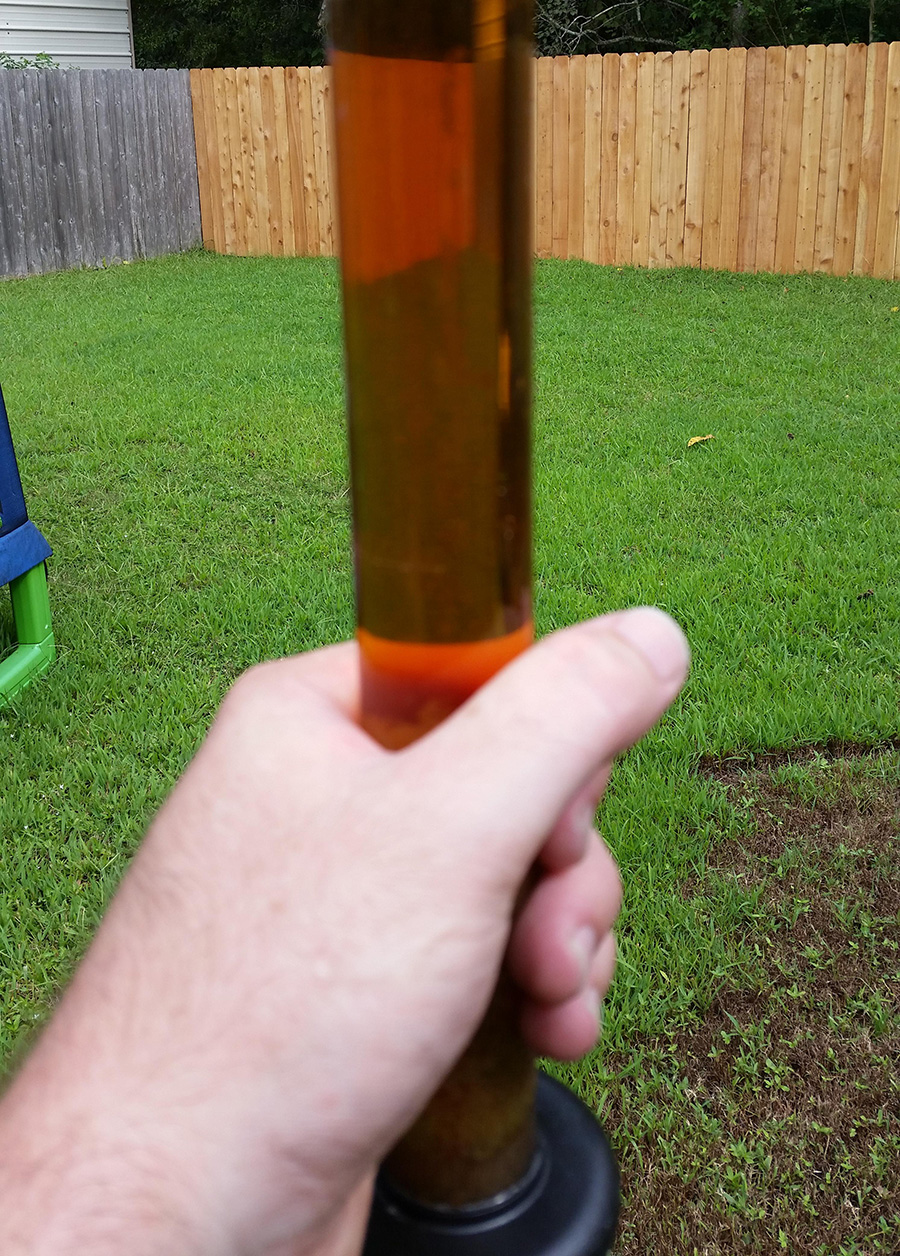 Hydrometer sample looks good.
One final point, I sampled this beer and a few others I had made through the entire process looking for harsh alcohols, medicinal off flavors, or anything really of note, and one thing always seems to hold true, it never tastes the way I was envisioning. Frustrated and fearful of a bad batch, I continued on to find out that until it is carbonated and cooled to serving temperature, it’s impossible to judge. So often, especially with stone fruits like peaches or apricots, I have thought the beer was terrible and even considered dumping it, and not bringing it up unless directly asked what happened to the beer I was just bragging about a week or so prior. So it seems to be just another case of relax and have a homebrew.

Have a clear idea of the beer you want to make beforehand. Fruit beers are framed better with a slightly malt forward recipe, so don’t let the hops do the talking for you. Purée will give you the most natural, yet easiest addition. Add purée in at secondary. Don’t judge it before it’s done.
Sources:
Featured Image: Taken by Jayneandd 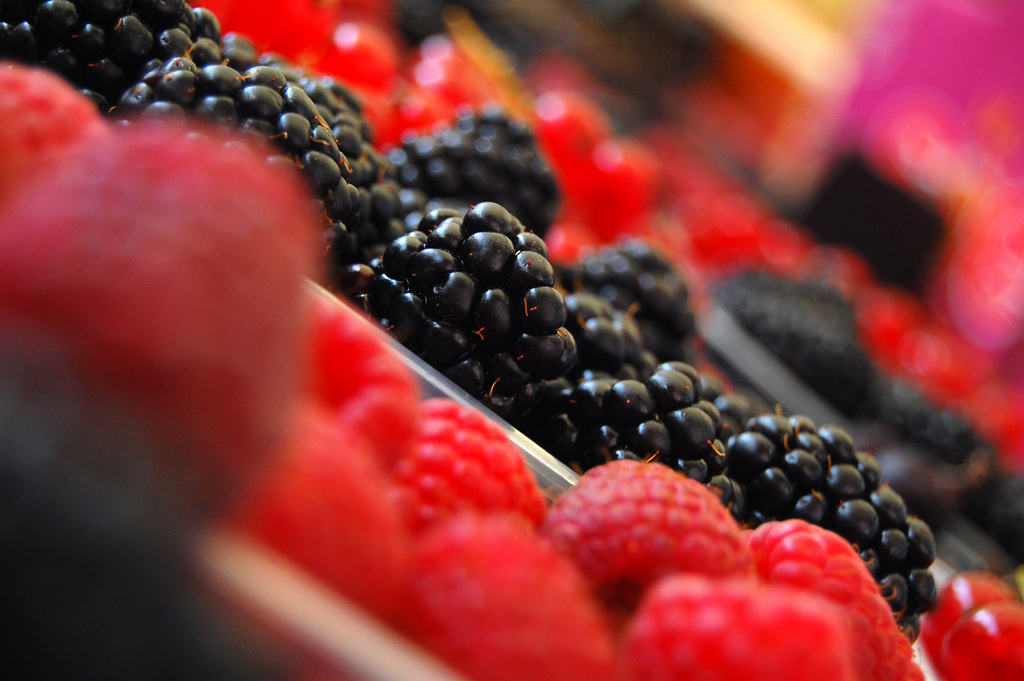