I've done a search and seen some fantastic ideas, but I'd like to see if anyone else will chime in with some thoughts.
I've been tasked to brew the beer for our company picnic and bbq competition later this year. Not being the guy to do something simple and ice down a keg in a bucket, I plan on building a portable kegerator to bring the brew. I'm not afraid of the layman thinking it looks redneck, in fact I used a cube cooler to build a stereo using 4 6x9's and a car stereo... I'm kinda partial to the diy redneck look and have been known for it.
If all I can fit is a single 5 gallon keg, that is fine, but I'd like the keg to fit inside completely, and just have a tap on the outside. As I said, any ideas would be awesome. This will also serve as my camping kegerator.

Thanks in advance for all the help!!!
B

Research Jockey Boxes. a lot of people make them out of coolers and trash cans, with a tap out of the side or even a tower setup.

This is the first thing that came to mind

Now I didn't see the truck box one, very nice! Probably looking for a tad more portable though. I don't know of any coolers that are tall enough for a 5 gallon corny though... I saw the trash kegerator, but I'm hoping to get something smaller.

Im leaning towards buying one of these and a paint ball tank and just stick my corny in a bucket of ice.

This is mine. The cooler bottom has wheels and a retractable handle. 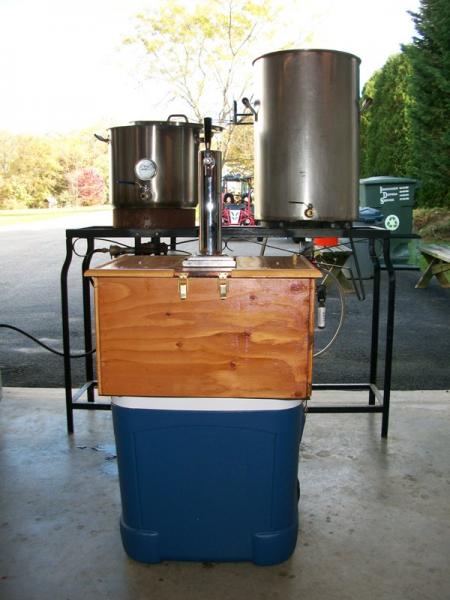 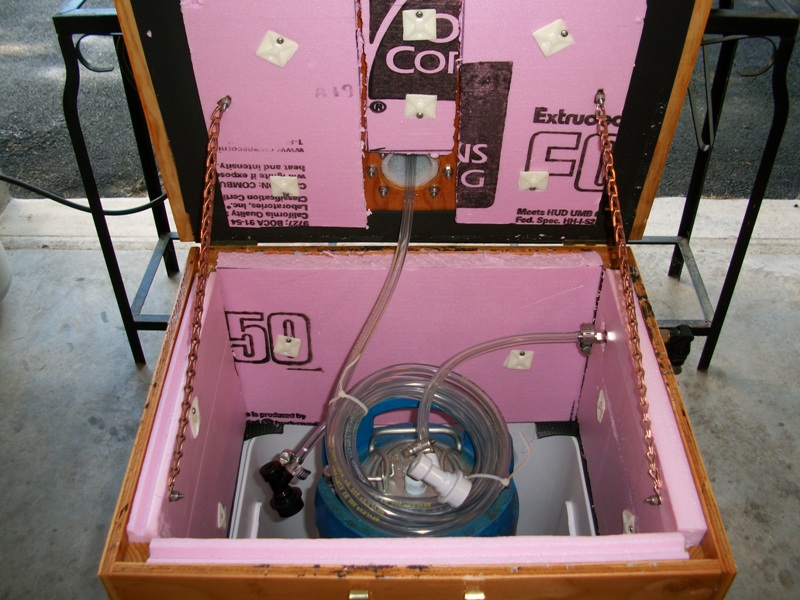 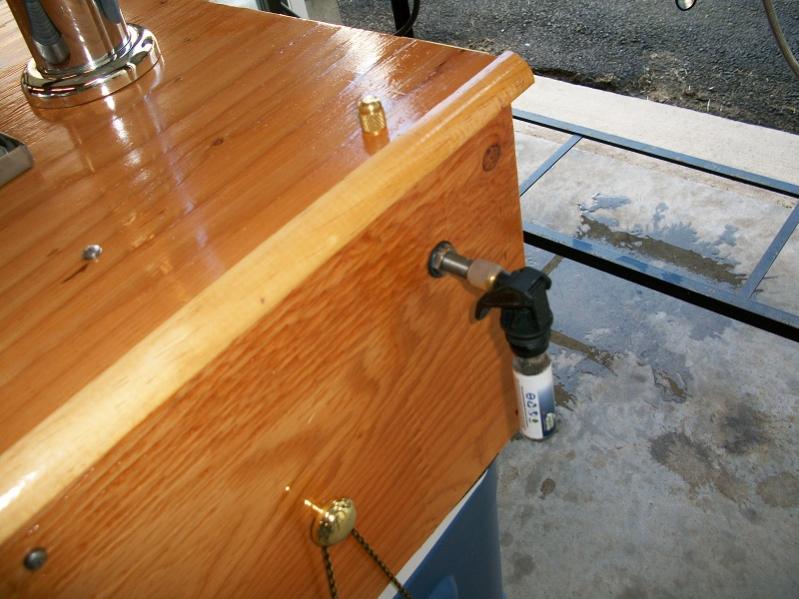 I may have come up with an idea. I am wanting something compact and convenient. At walmart yesterday I saw one of those stainless flip top trash cans, the right one would be oval and about 28" tall. They have a removable liner that I could put insulation between and have a spout come out the front. Pro's, con's? Does this sound like it would work?

Woot Woot! From our friends @ Cornelius!

Sorry for the small picture, I can't seem to find a larger one.

I got a 20 ounce co2 and picked up a kobalt mini air regulator to see if it will work. I don't see why it wouldn't and it's much smaller than a standard regulator. I'll try to post some pics later.
OP
J

Here's the co2/regulator setup I'm going to try out. 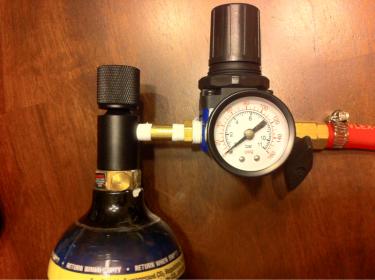 I too am looking into a portable kegerator solution. Right now I am leaning toward the plastic wheeled trash can (I think its BierMuncher's post that gave me that idea). I really like the idea of being able to hold two or three separate kegs and I just don't think that can be done cheaply any other way.

It will be a little hard to get your pressure accurate with those regulators. You may want a secondary or a gauge on your keg to double check. Those smaller regulators are more of a "here is what we think the pressure is" rather than an exact LBS.

I remember seeing plans in an old BYO issue (and I have gone through everyone I have so it must have been tossed of course) of a portable display that somebody built, that had a white board above where all of the taps were. The kegs were just in a garbage can with ice, but the display was really nice
S

I used a water softener brine tank inside a plywood box with styrofoam insulation it will fit a sanke or two cornies. At the dunes it stayed cold for 5 days with 3 bags of ice

Mine holds two 3 gallon kegs, but I have plans to add a removable collar that will allow it to hold 5 gallon kegs. 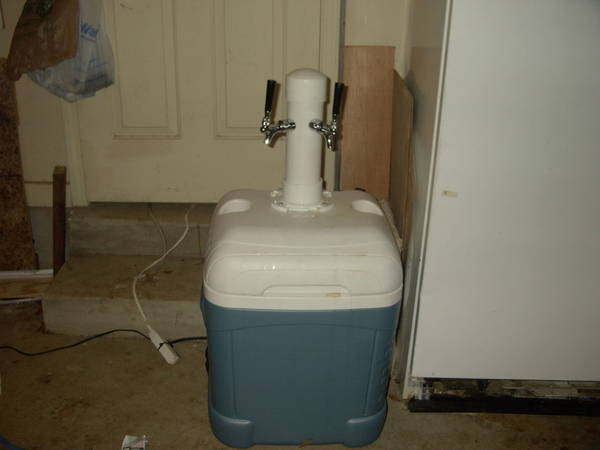 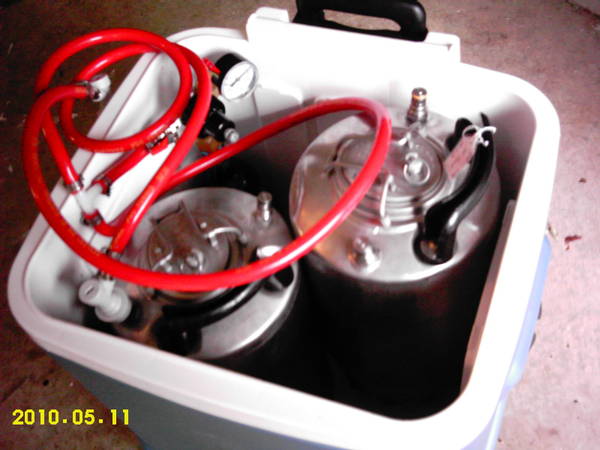 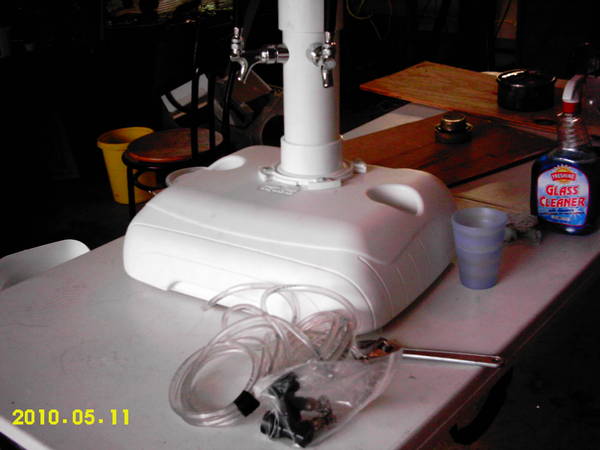 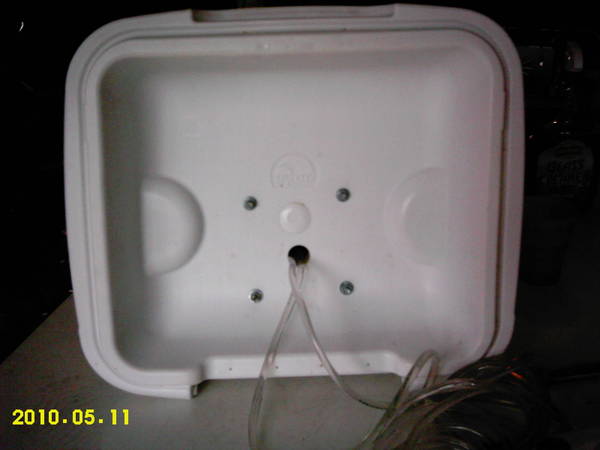 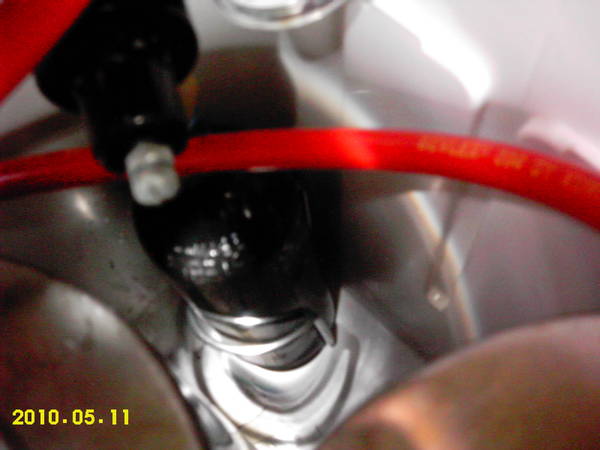 I really like that. Are the 3 gallon cornys the same diameter as 5 gallon? I have the same cooler and I might think about building a collar for it if I can fit two kegs. I also have some converted pinlocks, that have a larger diameter. I would imagine those may not fit. I will have to test fit tonight.

Cpt_Kirks said:
Mine holds two 3 gallon kegs, but I have plans to add a removable collar that will allow it to hold 5 gallon kegs.

That's awesome! I have three 3-gallon kegs, and I'd love to make one of these for our trips to Texas. Right now, we're using this for parties: 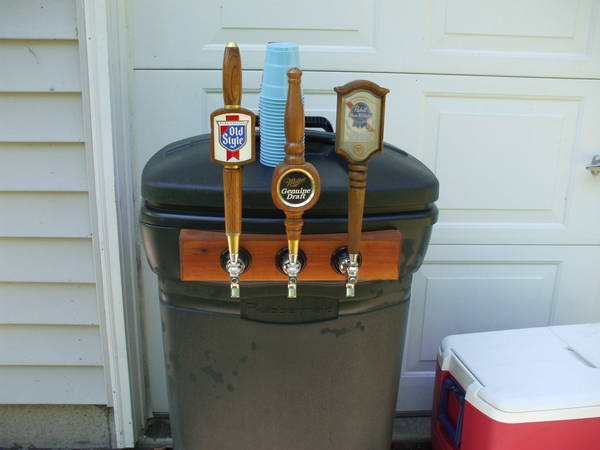 It holds four kegs, but we only have three taps on it. It can easily hold the three kegs and a 5 pound co2 tank and regulator.
OP
J

Well I built a small scale portable kegerator. It's not my ultimate goal, but it will work for small parties/BBQs. A 2 1/2 gallon water filled fire extinguisher that I've replaced the dip tube, spout and fittings on. It's pressurized with a 16 oz co2 charger. 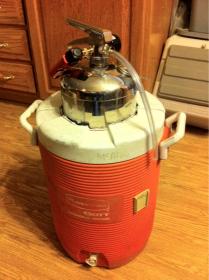 Jkstone said:
Well I built a small scale portable kegerator. It's not my ultimate goal, but it will work for small parties/BBQs. A 2 1/2 gallon water filled fire extinguisher that I've replaced the dip tube, spout and fittings on. It's pressurized with a 16 oz co2 charger.
Click to expand...

Nice... Got one too! I use a paintball tank to force carb!

Getting the banned back together

Jkstone said:
I may have come up with an idea. I am wanting something compact and convenient. At walmart yesterday I saw one of those stainless flip top trash cans, the right one would be oval and about 28" tall. They have a removable liner that I could put insulation between and have a spout come out the front. Pro's, con's? Does this sound like it would work?
Click to expand...

That's what I was going to suggest. I recently bought one of these in a stainless finish at target to use as a diaper pail, and as I unpacked it I couldn't help thinking that it would be the perfect size for a corny keg. It was on sale locally for $25.

here is my portable kegerator it holds 2 corny's or a 1/2 barrel sanke or either 1/4 barrel sanke kegs. I put a 36 gal trash can in a 55 gal drum and insulated it with foam on bottom and spray foam on sides then I put insulation on top under open head cover. it keeps a 1/2 barrel sanke cold for 2 days when iced down so it is awesome for tailgating or concerts and small parties

Ok, so I've come up with a design I'm going with. It should hold two five gallon cornies and have room for some ice. It's a work in progress but as you can see I have a plastic bin sitting in a wooden frame. I'll put some kind of veneer to wrap it and insulate between the veneer and bin. I'll also put a drain in the bottom and have a lid with taps on the top. Dimensions are about 33"x22"x13". I'm also thinking about putting casters on the bottom. What do y'all think? 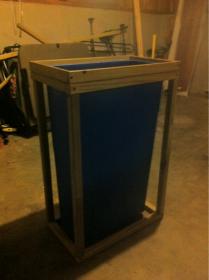 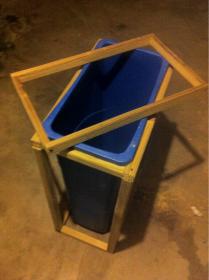 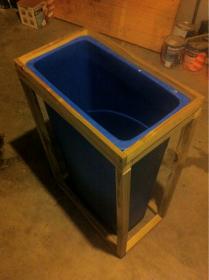 The objective here is to be able to serve anywhere right? Then my opinion is that you could chill the beer in line as opposed to all your (good) idea to chill the keg. I used a design created by a friend of mine and inserted 50 foot of 1/4 stainless steel coil into a 3 gallons Bubba keg ( http://p0.flyerland.ca/images/products/1372000/1372212_image.jpg ). Fill it with ice and serve at around 25psi, as simple as that!
I'll post pictures if anyone is interrested.
OP
J

Building with one battery for all my tools sucks! I put a drain in the bottom of the bin and attached a tube that will run out the back near the bottom. I put expanding foam int the bottom to create insulation and secure the bin. The front and back veneer are on ( I used dry erase board, friends can sign it with permanent marker and I can use dry erase marker to label the beer). Battery is charging now, back to it in an hour! 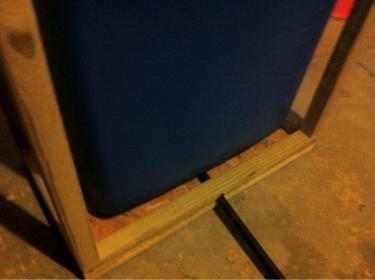 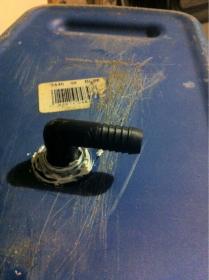 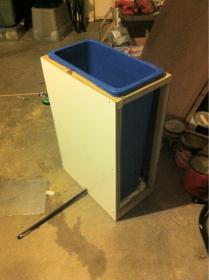 Been a while since I have updated this. I've got the shell about done. I'm gonna use a torch to bring out the grain in the wood. All I gotta do is order the shanks and add a few finishing touches. 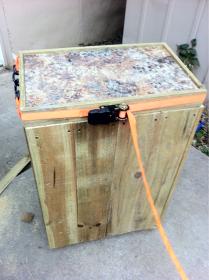 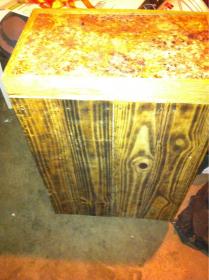 Didn't see this thread until today. I made this one a couple of years ago. My plans were to add a SS shank to it, but I'm still using the picnic tap. I want to switch the 5 lb. tank for a paint ball tank someday too.

Here's how to transport it:

(my build is in my sig - Offroading kegerator...)
W

mine is a cooler with two taps, with stainless coils plumbed into each tap. the kegs are stored outside the cooler, ice inside around the coils. I like this design because it chills pretty much instantly...no waiting around on the entire keg to get cold. it was previously one of morebeer's rentals and I got it for a really, really good price because they were tired of cleaning it between rentals. it works beautifully. if anyone is interested I'll post some pics when I get home this evening
S

Not sure what you guys are using to overcome the pin valve on paintball tanks but I use one of these...

It replaces the valve that comes with the tank and has no pin. Fits right in a standard regulator.

For my paintball co2 setup i bought a fitting thats screws onto the pinvalve on the tank, it has a 1/8 threaded opening. I bought a 1/8 to 1/4 adapter and that screws into a regular co2 regulator. Works really well.

For my portable kegerator i have a square cooler that i can fit an entire coke keg inside of, co2 tank and all with a faucet mounted on the door. And i have another smaller cooler that i cut an opening in the end that fits snuggly a pepsi keg with just the rubber handle sticking out, i like it better because the co2 is outside of the cooler for easier adjustment.
OP
J 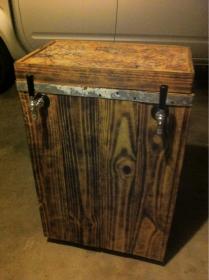 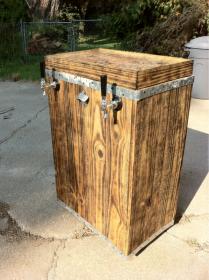