pitch+21hrs for my first lager. I checked on it and found... 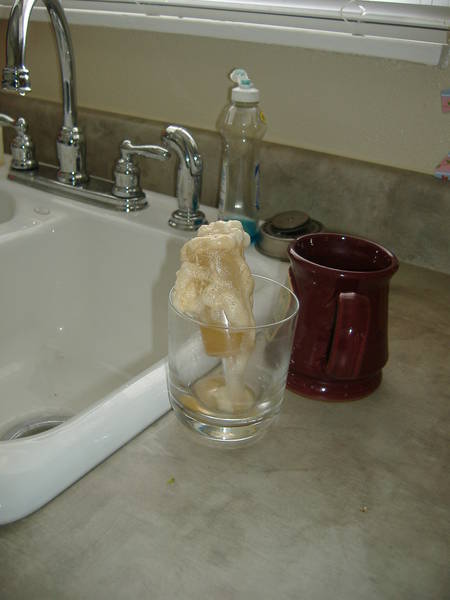 Holy blowoff! I'd expect this from an ale on day 2 or 3, but my bohemian pilsener is fermenting at 50F! Less than 24 hours later! Is blowoff typical for a lager?

So far I've used servomyces in 2 beers and both have had ridicu-blowoff.


Did you get the ceiling mop out?
OP
OP

Does AHS carry ceiling mops? It's on my b-day wish list.

It didn't blow its top luckily. It did make a little mess in my fermentation chamber, which is a PITA to clean. I'm going to have to take it apart to clean under it when this beer is done fermenting.
C

What temp was the wort at time of pitching? Too warm and it will take a long time to cool down to 50 F and by the time it does, the yeast can go volcanic. This is generally not good for lagers, so I always make sure the wort is cool enough before pitching and maintain temp control from there on.
OP
OP

Wort was about 52 at pitching.

edit: well, the fermometer on better bottle was reading 52 after it came out of an icewater bath. It may have been a few degrees warmer if it were all mixed around.
C

I highly suspect that the average temp of the wort in the fermenter was considerably higher than the 52 F indicated on the fermometer strip. The ice water batch would cool the wort slowly from the outside inward. The fermometer attached to the outside of the better bottle would only be reading the wort close to the side of the bottle and where the wort would be cooler. Adding to the problem is the heat that is generated by the yeast especially when they are fermenting at a high rate. This will slow the cooling down even more. It can take quite a while to get down from boiling to 52 F. I can get close with my counterflow chiller in the winter, but still need to refrigerate the fermenter for a few hours to get it to pitching temperature. Did you aerate the wort well? If so, that should have mixed up the wort pretty well and you should have gotten a reasonably accurate temp measurement at that point.

I'm just guessing on this and could be completely wrong. Just some things to think about.
OP
OP

I hit it for a few minutes with my o2 stone. It may have been a little warmer but it was mid fifties at the most about 2 hours after pitching. Fermometer reads 53 with a 50 ambient temp right now, and that sucker is hard charging.
C

You should be fine then. What yeast did you use? That is a rowdy ferment for a lager yeast. I haven't used the servomyces for quite awhile. I don't recall any dramatic difference in my fermentations. They all vary somewhat, so it's hard to pin anything down.
OP
OP

Wyeast 2001 urquell. I'm not worried about the beer, I'm just surprised. I didn't expect this. That's faster than most of my ales blow off.

Well apparently SOMEBODY is pitching plenty of yeast, using nutrients, and aerating well...

Hopefully all the n00bs will follow your example.
You must log in or register to reply here.