Latest Favorite and Next Brew Plan

Part of this post is just sharing my latest batch that I think hits the mark for my personal target "regular brew", part of this is to get some feedback on minor ingredient and process tweaks and part is just to put a post on this section of the forum! Not much activity lately!

Latest batch... First I have to say that I prefer a pale ale or pilsner style over ambers or stouts that have sharper or "stronger" malt flavors. I am not a hop head, but I have come to realize that I like GF beers with a "firm" hop profile. I think the flavor of the GF malts need a little help and every time I try to go really light on the hop character, I end up dialing it up on later batches. I have had a few Ghostfish brews that were lightly hopped that were outstanding, but I have not been able to get there for some reason with my brews. If you find Pilsner syle boring and uninteresting, then what I have here will not interest you at all.

One of the biggest changes that I made recently was move from ale yeasts to Saflager w-34/70. I think I never really liked the fruity ale yeast character and was always trying to compensate for it. I also did not want to try to brew a "true lager" in Florida even though I have a temperature controlled ferementation fridge. Then I read some Bruelosophy Exbeeriment articles that showed that you could "safely and effectively" brew at reasonable temperature as long as you use a lager yeast like Saflagerw-34/70 that can work around 60 to 65F and 'bam' I had my zone! Then I had to dial in the hop profile as my prior experience was then rendered almost useless.

Do not think that I have anything close to a fine tasting skill ... I am just a simpleton fumbling around in the dark trying to find something that I like! For sorghum base and other "American" style beers we tend to use very citrusy hops like Cascade and Amarillo, which I like, but I wanted to find something that was a little more rounded. I was not a fan of the brews that I made with EK Goldings, so I guessed that the "grassy" and "earthy" hop varieties did not appeal to me. So my stab in the dark was to pick a mix of varieties that together would have a blend of "spicy", "floral" and "citrus" character. For bittering I used Magnum and for flavoring and aroma I used a mix of Hallertau, Columbus, Amarillo and Summit.

Question 1: When using stronger hop varieties like Amarillo and Columbus, is it a waste to use Hallertau which I understand has a more understated flavor/aroma or does it maybe "smooth out" the mix?

The last thing that I did was to "tame" the specialty additions. I think a little roasted grain character is needed with GF pale styles because I think the pale millet and pale rice are just a little too flat. But too much and you quickly move toward an amber sort of bite in my opinion.

Anyway, this one hit the mark for me! In the planning phase for the next batch and will put in an order by this weekend. This one I will incorporate Ondea Pro and will back down the Diatase a bit.

Question 2: Reading the recent post on Ondea Pro, some of the temperature profiles were with those that are using a grainfather and have the ability to move temperatures more easily. My going in plan will be to use two rests the first at ~168F with Termamyl, and the second and third rests at the same temperature (145F to 150F). I will just put in the Ondea Pro at the beginning of the rest and then the Diatase later in the rest and then wait for the gravity to begin leveling off. Thoughts?
OP

In case anyone is interested, the summary sheet for my latest batch is below. Note: I put 9+ gallons into the fermentor and kegged 8 gallons, so keep that in mind when looking at the amounts. 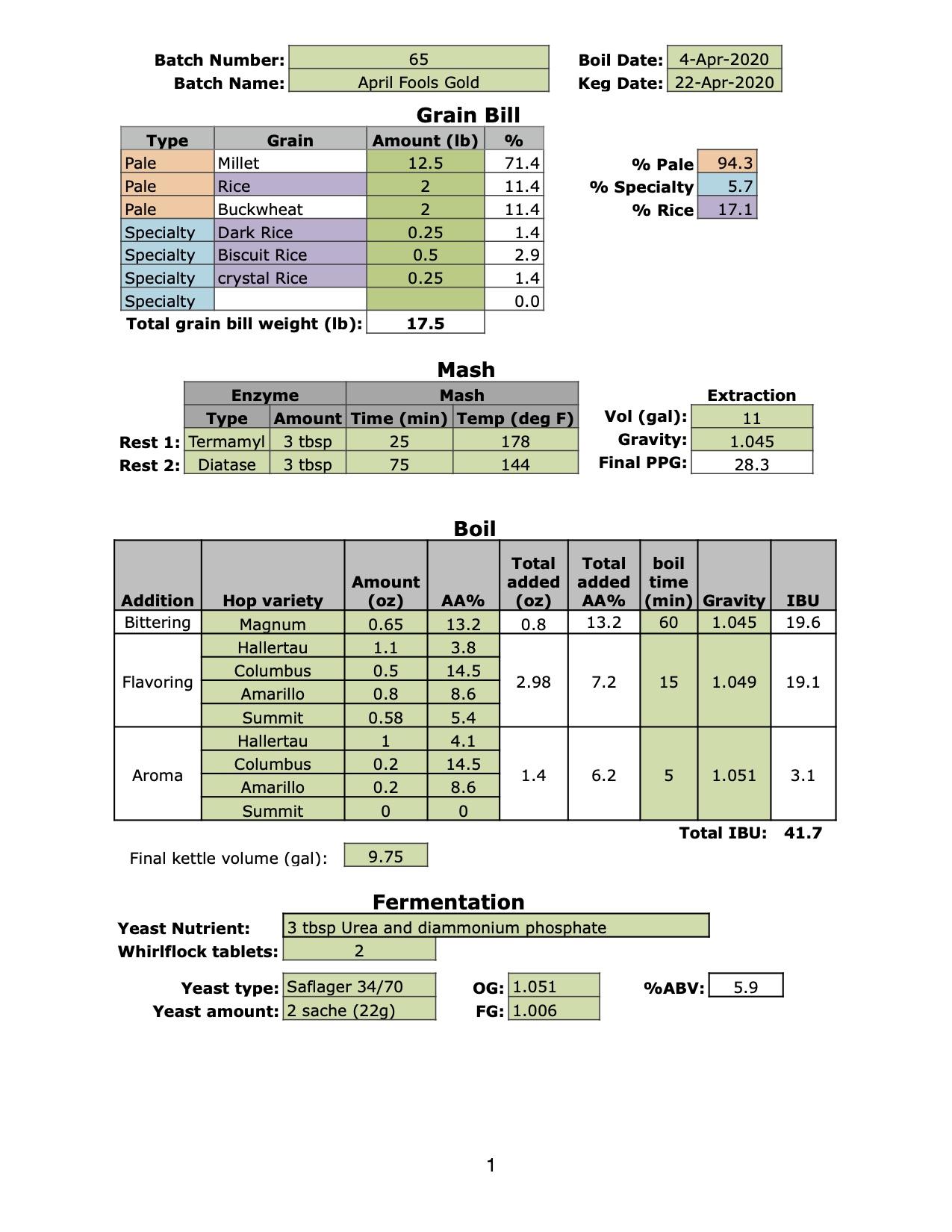 Based on your post, I think you would like Biscuit 4L as a base malt. It has become a staple for me....cleaner than millet, but maltier than pale rice.

I think you'll see a nice improvement with Ondea. It creates a more maltose based sugar profile, leading to better body and head retention. You can use the Termamyl at high temps and then add the Ondea & Diastase when you drop down for the lower rest. Many people have settled on the following dosages...

I too am on the Biscuit 4L and Ondea Pro hype train, although I am only in the middle of my second batch with it. Now that we're getting much better yields from rice than we did previously, it might end up being my main base grain. I may not really mess with millet at all for IPAs/PAs, depending on how my current batch turns out.

Aaron from Otherwise Brewing put together a spreadsheet of the recommended enzyme dosages from the manufacturers. I think many of us learned from this that we have been wasting enzymes! Of course, going a little higher than these recommendations shouldn't hurt.

L
Brewing an IPA next weekend, here is the plan