When you hear the expression ‘Mad Scientist’, specific images come to mind. For me, it’s images from Disney movies - either in cartoon form or black & white movies. Although this image doesn’t match Darin Danelski’s appearance, as I toured around his work at U Brew U in Ocotomowoc, Wisconsin, that’s the idea that kept coming into my head. I went there to review Darin’s Brew-Boss electric brewing system and controller. But while there, I got to see all kinds on inventions Darin had created, or was in the process of developing. 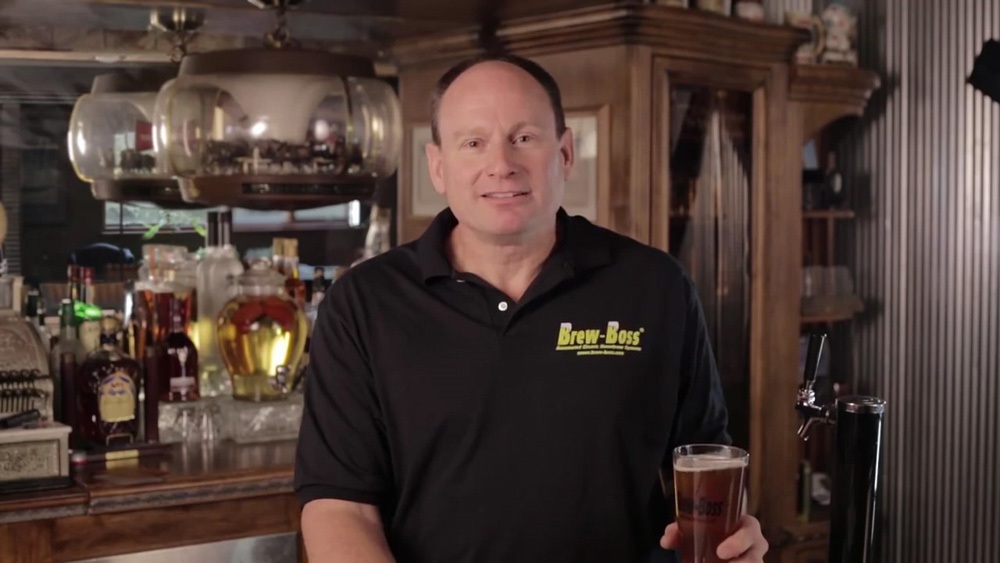 Darin Danelski
As we talked about the Brew-Boss system, conversation would drift one way or the other and next thing I knew, Darin was walking me over to “check this out” or “let me show you how I tried to solve that problem.” His inventions cover the full range of the homebrewing hobby, all with a sophistication that leaves you saying, “Wow, that’s slick!” With a Mechanical Engineering degree, he worked as an Automation Engineer for many years before diving into Brew-Boss full time. That means he has years of experience coming up with ideas for how to make processes faster, more efficient, and more repeatable. And, it’s with that approach that he tries to solve those problems in the homebrewing world.

Darin’s first homebrewing invention that met with success was called picoBrew (Not associated with PicoBrew, Inc.), which was an automated single vessel Brew-In-A-Bag system with a touch screen controller. It used off the shelf components for the brewing hardware, but the controller was custom designed by Darin. It was a stand-alone system that could operate independently, or be connected to a laptop. It eventually evolved into the newer Brew-Boss system that he sells today. 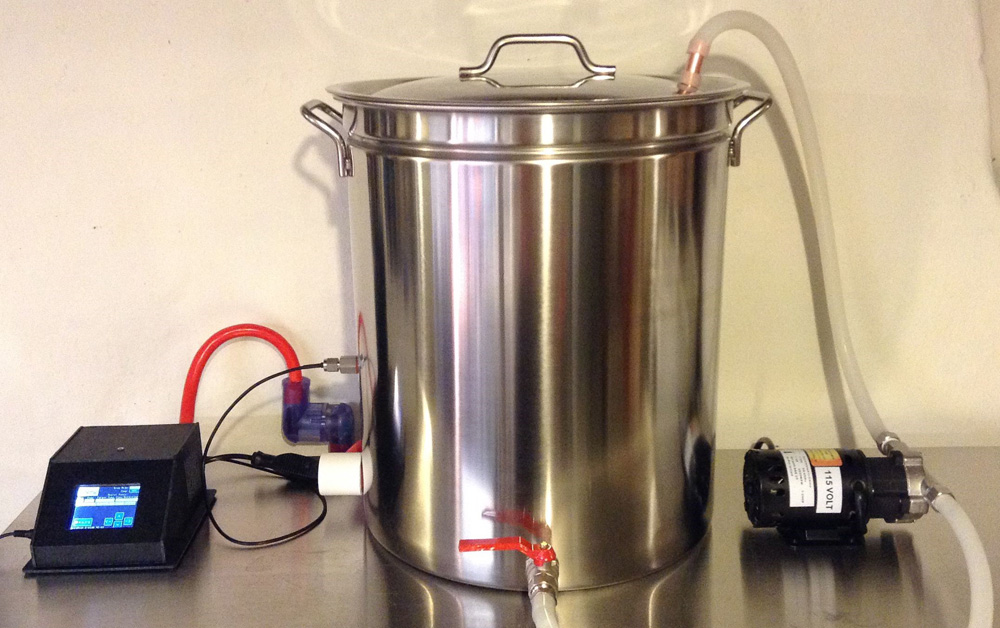 Daren's First Pico-Brew System
The origins of this system laid in a problem he was trying to tackle for his personal homebrewing projects. He wanted to create a system that was fully automated, would improve his brewing process repeat-ability, and reduce the time needed to brew his beer. He built a fully-automated 3-vessel HERMS electric brewing system. And by fully-automated, that meant all he had to do was crush the grain at the start, and add yeast at the end. Everything else from measuring and adding water and ingredients, as well as controlling temperatures and wort transfer was fully automated by his system. But as slick as that was, it only solved half of the problem he set out to solve. It made great, repeatable beer, but as Darin explained, “A typical 10 gallon batch took over 7 hours, and most of that time was spent sanitizing beforehand and cleaning afterward. I despised the cleaning and time spent cleaning. It saved me no time over my cooler mash system.”


Back to the Beginning

Darin started doing BIAB mashes in the mid-90’s before it was popular, or perhaps even had its own recognizable acronym. For him, it was a way to speed up the mashing process. Seeing the growing popularity of the BIAB process, he decided to take the time-saving aspects of that process and combine it with an automatically controlled electric system, like he had developed with his 3-vessel system at home. When that worked out well, he started getting comments from other homebrewers that wanted him to make them one. From there, he started selling a few on eBay, and eventually launched his own website to sell them.
In the early days, he was fabricating the equipment himself at home with some high-end machine shop equipment he had. But once demand started to outpace his ability to build them, he had to search out a manufacturing partner. To keep prices within the reach of homebrewers he had to develop relationships overseas. Although per-piece prices were kept affordable, it did require ordering equipment by the container-full, not in small batches. The initial prototype stage required a financial commitment to get the first parts made and shipped. Then he tested thoroughly to ensure it functioned as intended. For perspective, he notes that his first kettle prototype cost him over $2,000! 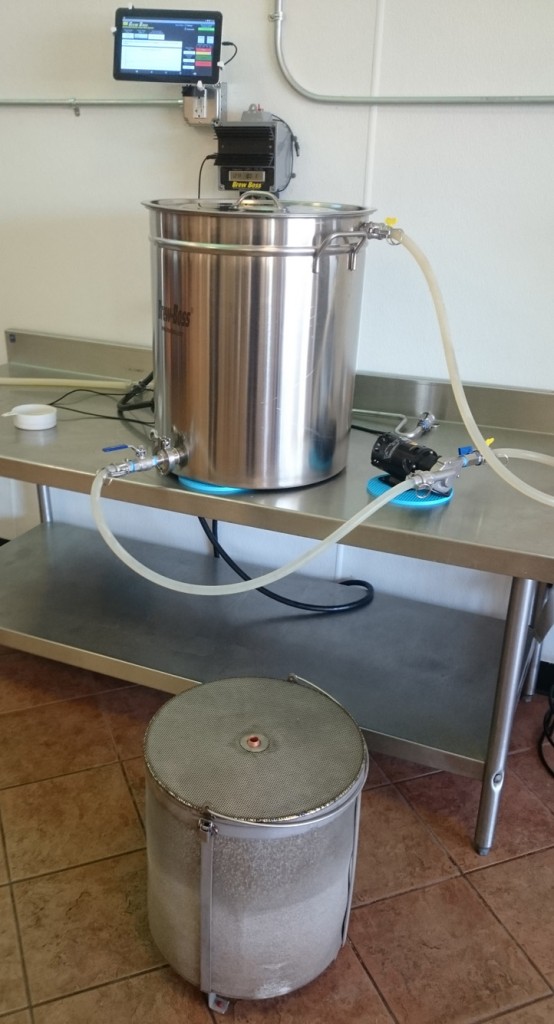 The BrewBoss System as it stands today.
After successfully passing through the prototype trials, he had to order his first production parts. With minimum order quantities of 200 parts, and having 3 different kettle sizes, his first shipment contained 600 kettles. Nervous about whether he’d be able to move that much inventory, he was relieved when after 9 months he had gone through all of those parts. Darin describes the growth, “When I started, I was selling about 2-3 systems a week. That has grown to about 2-3 per day, and peaks around Christmas where I sold over 70 systems in one day!”

As he moves forward with his business, he has to decide which ideas he’ll pursue and which ones he won’t. Some products on his website may get very low sales and then all of a sudden he’ll get a lot of orders all at once. He also gets a lot of requests from brewers and homebrewers for equipment they’d like, and they ask him to build it. To sort through it all, he says, “I pursue items that people request, that I feel would have mass market appeal, and be able to be sold at a reasonable price.” So keep an eye on this mad scientist for the creative solution to that brewing problem you have, or maybe even the brewing problem you didn’t realize you had until you saw someone figure out a solution for it.
Brad is a full-on craft beer geek, talking about craft beer and homebrewing to any and all that will listen. He has a small website, where he has craft beer travel stories, homebrewing, and beer reviews, from a Michigan home base (www.beersnobby.com).

Darin has always been available, knowledgeable and 100+% on supporting his grateful customers! Great person to do business with.
Darin is the man! Buy the Brew-Boss and you won't be disappointed!
Totally agree! I couldn't be more happy with my new Brew Boss and much of that is because Darin is so available and willing to help.
I have the 15 gallon Brew Boss and love it, I visited with Darin so many time I think we were on a fire name basis. great product,
I think it's supposed to be Oconomowoc, not Ocotomowoc.......
Dan also provides incredibly helpful customer support too!
You must log in or register to reply here.
Share:
Facebook Twitter Reddit Pinterest Tumblr WhatsApp Email Link