An Interview With Saint Benjamin Brewing

Succeeding in a big beer city like Philadelphia can’t be easy. This is a town that sits alongside Portland, San Diego, and Asheville as one of the great beer Meccas in the United States, after all. While that means it’s packed with beer lovers, it also means there is a lot of competition. How do you rise above the pack and get noticed in a city that is already swimming in a sea of amazing beer?
For the brewers at Saint Benjamin Brewing Company, it has been a combination of hard work, smart business, and tapping into the lessons they learned as homebrewers.
Located in the historic Kensington section of Philly, Saint Benjamin is named after the city’s most famous denizen, Benjamin Franklin. Good ol’ Ben was known for many things, and one of them was brewing. Ben Franklin was an avid homebrewer who never actually said the beer quote famously attributed to him – “Beer is proof that God loves us and wants us to be happy” – but who did brew an excellent spruce ale that some modern breweries have recreated.
For the folks at Saint Benjamin, Ben Franklin was more than just a local hero who helped provide a good brewery name, though. His spirit of piling innovation atop tradition helped inspire them to create offbeat beers like their coffee kolsch and India cream ale. And those experiments, of course, began in a familiar place for Homebrew Talk readers: in homebrewing.
We recently had a chance to talk with owner and brewer Tim Patton and brewer Andrew Foss, who gave us insights into how the worlds of homebrewing and professional brewing can sometimes collide. 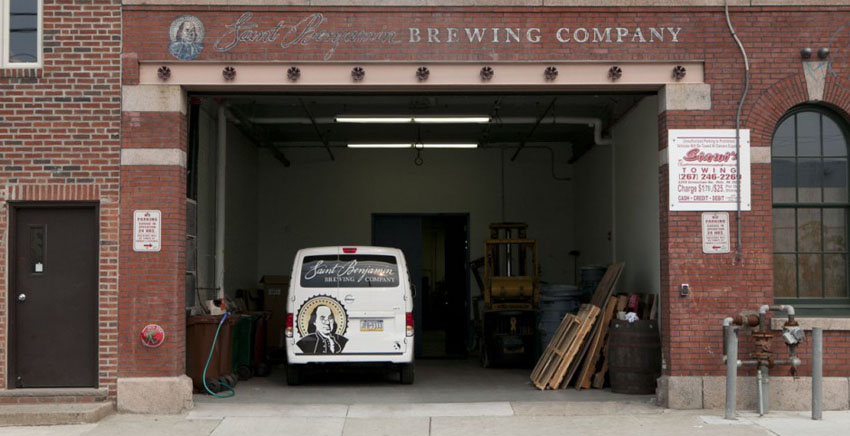 How Did Saint Benjamin Brewing Get Started?

Tim Patton (owner/brewer): I founded the brewery in 2010 but didn't open it until 2014. Finding a site and getting through construction took a while. We are located in a neighborhood called South Kensington, it is located near a few hip neighborhoods and is an old industrial area that is on the rise. We are in a three-story former carriage house of the Theo Finkenauer Lager Beer Company that opened in the 1870s and went under during Prohibition. I really love the history of the building and the neighborhood, as well as where I see things going.
We opened our brewpub on-site in May of this year. We have a 12 taps and a hand pump, a full kitchen plus wine, cider, mead and spirits that are all made in Pennsylvania.
Andrew Foss (brewer): I Started at Saint Benjamin Late in 2014, after leaving a volunteer/apprenticeship position at a local brewpub.


What Did Your Time as A Homebrewer Teach You That Became Invaluable Once You Became A Professional Brewer?

Andrew: Stay organized and clean as you go. I never got that part right as a homebrewer, but there’s nothing worse than getting to the end of a long day and having to take care of all the stuff you could have done while brewing.
Tim: I agree about staying organized. Also, since brewing takes a while and there is always so much to do, finding small time savers that don't affect the quality of the beer is important.


How Soon After You Started Homebrewing Did You Begin Going Off-Style and Creating Your Own Twists On Things?

Andrew: Once I got to a point in home brewing where I knew my process was pretty good, and I could get beer in the glass that was pretty close to what I was trying to do, I started experimenting a little. I am a four ingredient beer guy, mostly. I did some beer/cider hybrids, and a lot of wild yeast harvesting. One of the strains I harvested then is in use now at Saint Benjamin, in our Yardarm Saison.
Tim: I did about three kit brews then immediately went all grain and started creating my own original recipes. Most of what I made trended towards either the English or the Belgian side of things. I knew pretty early on that I wanted to do something in this field, so a lot of my ideas were things that I wanted to drink that I also thought others might want to buy.

Tim: I do really appreciate the precision and consistency in a pro environment. Having things built into the equipment like sight glasses, sample ports and the cones on the fermenters makes it much easier to make the kinds of quality checks that were a pain at home or used up too much of a little five-gallon batch. Also, being able to get really fresh yeast was a huge change.
A lot of the beer I made at home was pretty traditional, so I wasn't as limited coming into a professional setting by having to dial back on a bunch of expensive recipes.
Andrew: For me, it’s that in some respect, it is way easier to make kick ass beer at home. You have no constraints on scheduling, ingredient cost or availability, 'marketability' or anything like that. Brewing professionally is a bit different in that regard. It can be tough to get the hops you want, or to justify buying a pitch of yeast and only getting two or three generations out of it. At the same time, brewing on high quality equipment allows you a level of control and precision that most homebrew setups lack, and you can usually trade for or buy hops, or snag a pitch of yeast from another brewery in a pinch. 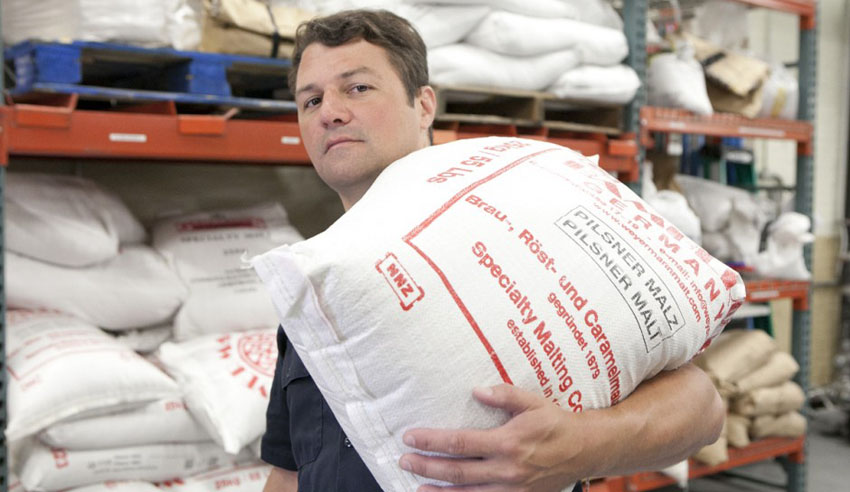 Brewing Professionally is A Whole Different World From Homebrewing, but Does Homebrewing Still Play A Role in What You Do?

Tim: I haven't brewed a five-gallon batch since a few months before the brewery opened in 2014. We have been doing some experiments in barrels and I am sure we will re-use my homebrew carboys for some test sours soon.
Andrew: We did a beer at Saint Benjamin where we did not want to treat the mash/sparge water at all – it was a collaboration with our local water department – so I did a scaled down "mini mash" before we actually brewed the beer to make sure that the pH would fall around where we like it. It also is not uncommon for us to pull off five gallons or so into a carboy to ferment with a different yeast, or fill a growler and condition on fruit or oak.


A Significant Percentage of Homebrewers Daydream About Brewing Professionally, and Many of Them Genuinely Want to Explore A Career in Beer. Is There Still Room for New Brewers to Enter the Marketplace?

Andrew: Of course! I don't know how long the market can keep up with the pace of places opening and that kind of thing, but for someone who wants to brew beer, there are jobs out there. It’s tough to get your foot in the door, and you may have to work for free for a while, but if you get that opportunity and make the most of it, you won't have trouble finding a job. Making the most of it is key. I didn't have much trouble finding a job after a long volunteer stint, but the only reason anyone even considered me was because I had a strong recommendation from my boss Scott. Without that I would probably still be tending bar.
Tim: I think there is still room for new breweries, though the distribution game is getting tight. People love their local brew pub, and since for a lot of people it can be your local pub, there is almost always a market. As for brewers, we are seeing our brewer friends move up and around the industry. If you are willing to relocate for an opportunity, then there is a lot out there.


For Homebrewers Reading This With A Glint in Their Eye, Hoping to Open A Brewery of Their Own One Day, What Do They NEED to Know That is Often Overlooked?

Andrew: I don't even know where to begin on this one. My biggest piece of advice is to work in the field for a while before you decide that you are ready to open a brewery, because you aren't ready. I can't speak to the financial investment because I have never opened a place, but you can be the best brewer in the world and fail if you don't know how to run a business.
Tim: Research is key. I also wish I had more hands on experience before I opened the brewery. I was really going blind in so many areas. It wasn't even the brewing, it was legal issues, taxes, permits, delivering beer. I tell people often that if you want to brew beer, become a brewer; if you want to run a brewery then start a brewery. Most brewery owners don't get to brew.


Finally, What’s One Tip, Technique or Idea Homebrewers Should Try That You Don’t See in All the Usual Guides to Homebrewing?

Andrew: I don't know that I have any great secret to share, but if you are a homebrewer who wants to make better beer you need two things: a PH meter, and temp control for your fermentor.
Tim: My beers became so much better when I started controlling the temperature of my fermentations. I also think if I had a source of fresh yeast during my home brew days, my beer would have been even better.

Excellent article. All the information in this article I will take to heart as I am a homebrewer in the beginning phases of transitioning to pro!

Tim: "Also, being able to get really fresh yeast was a huge change."
Tim: "I also think if I had a source of fresh yeast during my home brew days, my beer would have been even better."
Am I using old, stale yeast, and I don't even know it? I make a starter, cold crash for one day, and decant/pitch on brew day. I consider that fresh yeast. Am I missing something, or was Tim?
D

The yeast should have a production date on it. Ideally you want to be using yeast produced within the last couple of month.

thespiff,
I make a starter, so my yeast is produced one day before I pitch it. It's not difficult to brew with fresh yeast.