What I did for beer today

I made a yeast starter for an IPA tomorrow.

Tried cleaning the dry-hopping gunk ring, out of my better bottle. It took forever and still has small spots i cant get out by soaking. Now im gonna go dry-hop the same beer.

Brewed a smoked maple brown ale made with home smoked 2 row using hickory. Helped a brew friend clean out 8 ball lock corny kegs he just got for a great price. Helped said friend put together a pale ale recipe and hooked him up with some ingridients ( he is just starting out brewing ) introduced him to edworts apflewein and had to give him another bottle and recipe to brew that as well. 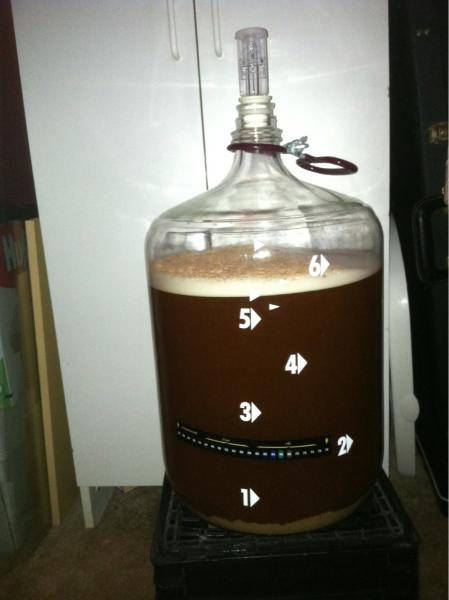 Picked up supplies for a DFH Shelter clone

I did the most I've ever done for beer in one day. Bottled 2 different batches. Washed yeast from one of those. Installed a dip tube in the bottling bucket. Got 50% done with my ebay temp controller build. Brewed a Two Hearted clone. Oh and drank a few. Long day!
M

I brewed my second batch of beer today. Brewers best Witbier and I drank quite a few.
I

I patronized breweries and their local distributors. I consumed the products and liked it.

Bottled some wine then a lot of hardcore cleaning for my beer an wine equipment.
J

Had a minor heart attack when I reviewed my HB stocks and realized that I only have a case and a half of drinkables right now--one batch in the primary, one just bottled a week or so ago. Boy, I really need to brew a few more batches...
N

Added a half gallon of some strong DME wort, along with some gueuze dregs, to hopefully breathe some life into my barely-sour Berliner Weisse
R

rtb178 said:
I was so frightened that I had to dilute it. It still looks like it's going to be a hoppy monster. Not sure I could handle a triple Ipa.
Click to expand...

Btw, glad I did so. It's extremely bitter right now, so I'm happy it wasn't even more so.

I end up cleaning and organizing more than anything else lately. Mostly cause I'm poor.

Also read up on some styles I want to brew before the bitter cold hits. This year I don't think i'm going to brew much in the winter. Big hassle on getting water to the garage. That and i'm not too keen on having my keggle chill in the snow. Still would take too long.
N

Brewing a 3bbl batch of a new CDA recipe

Ordered a # of each, Bravo and Columbus.

Not today but last night I bottled a Honey Pumpkin Porter and ordered a new hydrometer test tube. $5 shipped from amazon!

Going to plan out a new brew today! Gotta keep the pipeline going

jperry said:
Ordered a # of each, Bravo and Columbus.
Click to expand...

I bought some blowoff tubing, another 8oz Star San, took a hydro reading of my Harvest IPA with wet Michigan Cascades, and had a homebrew. Not a bad night.
G

I did the Heineken experience two years ago when I was in Amsterdam, good times

Tried to decide weather or not to bottle because of loose dry hopping pellets, still in suspension.

Bottled my Cascade Pale Ale. Got stuff ready to brew High Gravity's 71 strasse Hefeweizen tomorrow. now I'm having a SN Torpedo, and relaxing while watching Warrior on the big screen.

Pieced together a recipe for a stout since ive been dying to brew one since I got my kit. Also realized just how much cheaper all grain is then extract. From Northern Brewer, the extract recipe pieced together would hit me for$54.93, the all grain is $30.82.

I'm still in Afghanistan and all of my brew equipment is still at a friend's house in Washington in boxes. Though I did buy a .5 micron aeration stone.
M

I drank a beer I didn't like just to have the bottle for my homebrew.

Bottled my cider. It's a really nice blend of apples from an "antique apple" orchard that specializes in rare apple varieties. Got one blend in September and I'm planning to go back in November when they're harvesting and pressing entirely different varieties. Anyway, it was at 1.012 and I'm planning to do Pappers' stove top pasteurization, so I'll start checking the carb levels on Friday.
N

Did a general cleaning of 3 of my fermenters, put a case of bottles in Oxyclean to de-label, drew water for a batch of Hefe, and started cleaning 2 kegs + lines for some batches that I have fermenting now. Also looking at recipes for a pilsner that will be brewed soon (Bitburger).

Made a huge mess bottling my ddh ipa... still trying to figure out how to get this hop reside/sticky oily spots of my better bottle.

Wtf?!? What are you brewing?

tuckferrorists said:
Wtf?!? What are you brewing?
Click to expand...

I'm just trying to make sure I have Simcoe, Amarillo, Centennial, and Citra for my IPAs and IIPAs in 2013... I wanted to make sure I didn't miss out on them before they sold out, so I ordered a bunch.

I pasteurized my cider using Pappers' method. Glad I started checking the carbonation levels right away - the bottles were fully carbed in 24 hours!
K

thisoneguy said:
I'm just trying to make sure I have Simcoe, Amarillo, Centennial, and Citra for my IPAs and IIPAs in 2013... I wanted to make sure I didn't miss out on them before they sold out, so I ordered a bunch.
Click to expand...

Won't hops "go bad" in a matter of weeks/months, even if refrigerated and vaccuum-packed? I've been under the belief that I shouldn't order anything (grains/hops/yeast) more than a month before I'm ready to brew with it. Am I being unnecessarily paranoid?

kombat said:
Won't hops "go bad" in a matter of weeks/months, even if refrigerated and vaccuum-packed? I've been under the belief that I shouldn't order anything (grains/hops/yeast) more than a month before I'm ready to brew with it. Am I being unnecessarily paranoid?
Click to expand...

I think you are being unnecessarily paranoid. I keep mine in the freezer, vacuum-sealed by food-saver and then put into brown paper bags. Everything I've read says that hops stored under vacuum in a freezer should keep for a pretty long time, since heat and oxygen are what cause hops to go bad. I wouldn't keep them around for too long, but a year isn't a problem. I still have hops from the 2011 crop that haven't noticeably degraded since I got them (at least as far as my senses can detect).

Also, if you store uncrushed grains in a cool, dry place in an airtight (or close to it) container, it will keep for at least a few months. That's an argument for getting a mill... you can buy base malt in bulk and just store it until you need it (within reason).

Last, dry yeast will stay viable for quite some time (1-2 years, I believe) if kept in its original packaging in the refrigerator. Liquid yeast degrades much faster, but I've heard stories of people using liquid yeast that is well beyond its "expiration date" with no ill effect after making a 2 or 3 step starter. My LHBS sells discounted vials/smack packs of "expired" yeast; I've never used one, but I've seen people buy them with that in mind.

bottling up an IPA and stepping up my starter of WLP001 California Ale Yeast for either a Dead Guy clone or a DFH 60 minute clone cant decide yet, anythoughts?

I'm with you. I pre-ordered 5 pounds of Citra and Simcoe the other day. Today I added 5 pounds each of Centennial and Amarillo. It sucks running out of good sources of these hops mid year only to wait until fall to get them again. Plus, I've read that the 2012 hop harvest looks somewhat hit and miss, so you have to figure that prices will be up and supply will be down in 2013 for all these varietals. I don't plan on buying hops at $3-4 per ounce next summer.
You must log in or register to reply here.
Share:
Facebook Twitter Reddit Pinterest Tumblr WhatsApp Email Link

What beer did for me today...

I
what I did today