What did not come in the mail today?

I have ordered some new toys from Blichmann and October Seamers both well over a week ago and it has been radio silent. Now on both their websites it says there is a delay so no issue but I may not see this stuff for 3-4 weeks.
M

I'm shocked Oktober is operating at all. Non essential manufacturing in Michigan wasn't and still may not be allowed depending on your interpretation. Though at this point more than a few businesses have just started ignoring the order.

matt_m said:
I'm shocked Oktober is operating at all. Non essential manufacturing in Michigan wasn't and still may not be allowed depending on your interpretation. Though at this point more than a few businesses have just started ignoring the order.
Click to expand...

Yeah, I am not sure. The website shows they are open. Maybe because they support the small breweries. I says they are at a small staff. It will get here when it does.

Robert65 said:
I've recently placed orders with MoreBeer, Northern Brewer, Brew Hardware, and Great Fermentations. While NB and MB said they were having some delays, these were very minor, everything moved just a few days slower than usual. GF hasn't sent a shipping notice yet about a week after ordering, but I think one of the items may have been back ordered even before the plague. Brew Hardware was as prompt as ever. I keep getting reassuring emails from AIH and William's saying it's business as usual. I just realized, just about the only place I really haven't put to the test in all of this is my local, where I usually get almost everything! Better think of something to pick up curbside and show some love. Frankly, I'm amazed that things are functioning as well as they are. I do think I've noticed I haven't been getting all the updates on order status I might have in the past -- a couple of things just appeared on the porch without warning. If these places are swamped, better they spend their time filling orders rather than sending emails -- same may apply to shippers.
Click to expand...

I buy everything I can from my LHBS otherwise they may go away. And your money stays in the area.
M

Looks like USPS is broken in Metro Detroit again. Was hoping to get the Steam Slayer I bought off another member installed this weekend but its "in transit to the next destination" Same with something I shipped to someone and part of my daughter's graduation gift (a winter coat so I think she'll survive )

My 3 LHBS in Columbus have been good throughout this, but i also supplement via Labelpeellers.com out of the Kent area and have every order delivered by the second day if not next.

my new controller and recirc manifold has been in the Usps system for 18 days from CA. It was last updated on the 11th, still in CA. Please don’t use USPS retail ground!

A pound of gas fittings for a keg purging system was s'posed to arrive Friday.
Now after cooling their heels in Rhode Island for no apparent reason they're sitting in Chelmsford MA, which is the last stop before delivery.
Which would be Saturday, now. But they're gonna hold them 'til Sunday? Does UPS even deliver on Sunday?
Sheeeyit.... 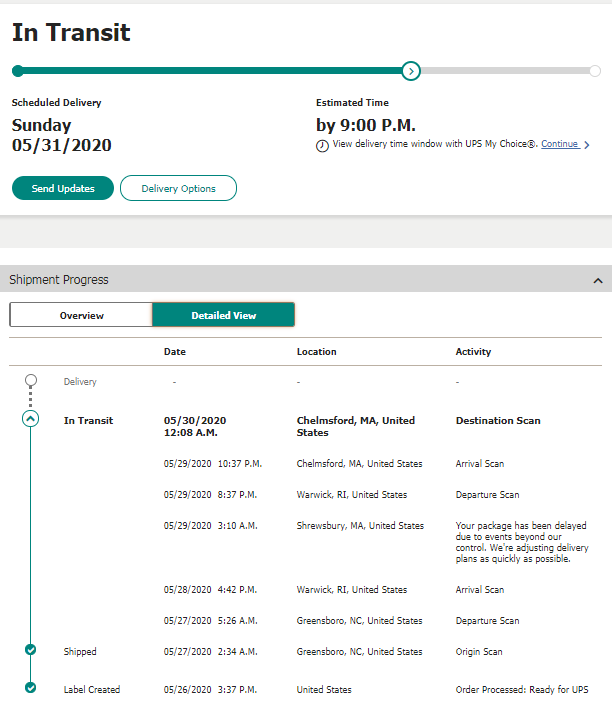 Look what I got in the mail today!

Got this in the mail today!

Got my HBT stickers today in the mail!!

I
what I did today