Need a Brew Name for this Label...

Going for humorous and not at all politically correct... but I just can't think of a name that I'm happy with. Any thoughts? 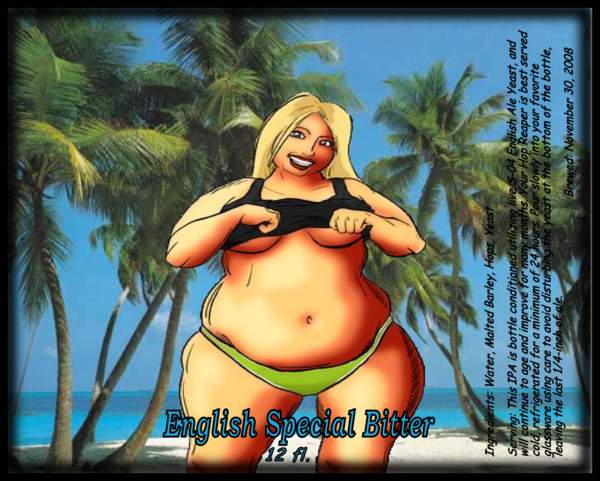 Still a work in progress... the text colors will need to be tweaked and more text added to the left depending on what name I come up with.

Bitter in the Morning

Bitter they are, harder they fall!

Ditto on that name.

She looked good on Myspace, but now I'm Bitter?
P

Cellulite Blonde?
SLOGAN: "After a 6 pack of this brew you're ready for a 4 tonight..."

I hope this isn't anyone we know...I'd hate to be insulting someone's SWMBO...
OP
OP
H

Thoughts? Still a work in progress.... 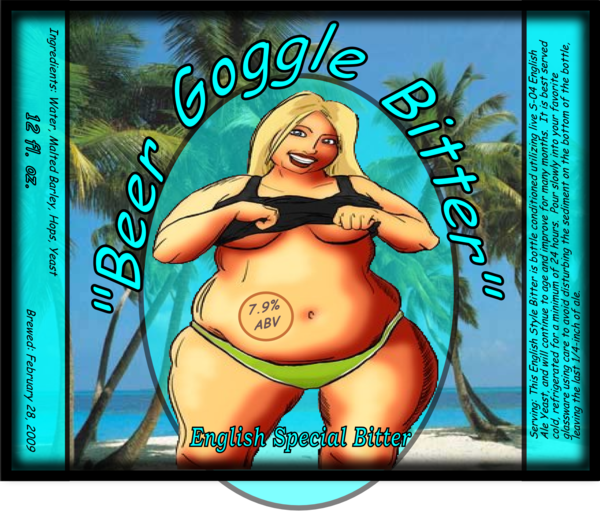 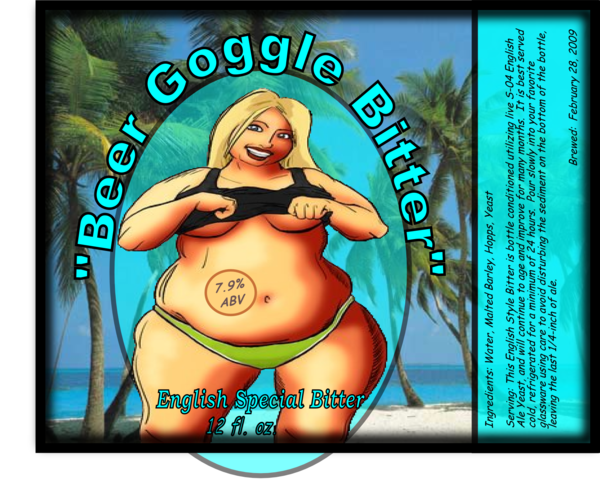 To add to Beer Goggle Bitter, make it a hologram with one being the current image and the other having Miss. America looks. Then add the slogan, Beer, helping ugly guys score since 1892.


The chairwoman of the Campaign for Real Ale recently said that British beer-makers should brew a real ale specifically directed at women.

"But how would I know if I'm drinking such a brew?" Glad you asked....

The Top 15 Signs You're Drinking a Chick Beer

15. Every time you have to hit the john, you find yourself asking a friend to come along.

13. After a few, you find yourself arguing that figure skating actually *is* a sport.

12. Your belches come out potpourri-scented.

11. You still cry into your eighth one, but now it's because the guy on the next stool is wearing the same outfit.

9. The label boasts that it's this month's recommendation from Oprah's Beer Club.

8. Your desire to wear women's panties is stronger than usual.

7. When you squat to pee in the sink, you notice a fresh floral scent.

6. After you've slammed a few, you find yourself at Blockbuster trying to decide between "Sleepless in Seattle" and "Waiting to Exhale."

5. Regis Philbin gets funnier with every sip!

4. The can has a picture of a shirtless Fabio on the front and a bundt cake recipe on the back.

2. There's no head unless you pour some liquor into it.

and the Number 1 sign You're Drinking a Chick Beer...

1. Your man-boobs have started lactating.

Baby Got Back Brutal Bitter
C

My favorite is "Great Personality Ale" - or whatever it was. That's just TOOOOO funny.

or something with a side note on the label telling you to raise the bottle to compare to women at the bar. if the women look the same back off. its a good drunks way of easy comparison. or something saying that if this label starts to look sexy put it down.
B

This thread is too freakin' funny....

Beer Goggle Bitter... but in a VERY close second, there's a tie between:

Junk In Her Trunk Bitter

"Better Beer"--Better have a few more...

why is my mom on your beer label? bitter
T

Converting garage into brewery in China