How Many Cells in a Yeast Slurry. Anyone Use This Method?

So I wandered headfirst into a rabbit hole today with the help of Google Search. The quest was for a simple answer as to methods for estimating yeast cell counts in a slurry derived from an over-built starter. That number is almost always the entering argument for any of the many yeast pitch calculators, and yet without the aid of a microscope or automatic cell counter, if the primary entering argument is off then the calculated answer will be off. Since most "ball park" estimates vary from 0.25B to 4B cells per mL, the accuracy of any calculated total cell count is pretty much useless. Don't misunderstand what I'm saying. Most of the calculators do a reasonably accurate job of giving an answer, but if the input data are wrong, then so is the output data.

Eventually, after nearly breaking the Interweb, I came across an old archived article in Brew Your Own that made a lot of sense. The writer was a graduate of Cal/Davis and well versed in brewing science. The article also is a good primer on definitions of what constitutes a slurry, while providing a simple methodology for (semi-)accurately guesstimating total yeast cells in a slurry. All you need is a graduated cylinder, a sample of slurry from a yeast starter, and the Yeast Slurry Standard Curve graph that the author compiled from data obtained from White Labs. So, ya' know, not my work and properly attributed. 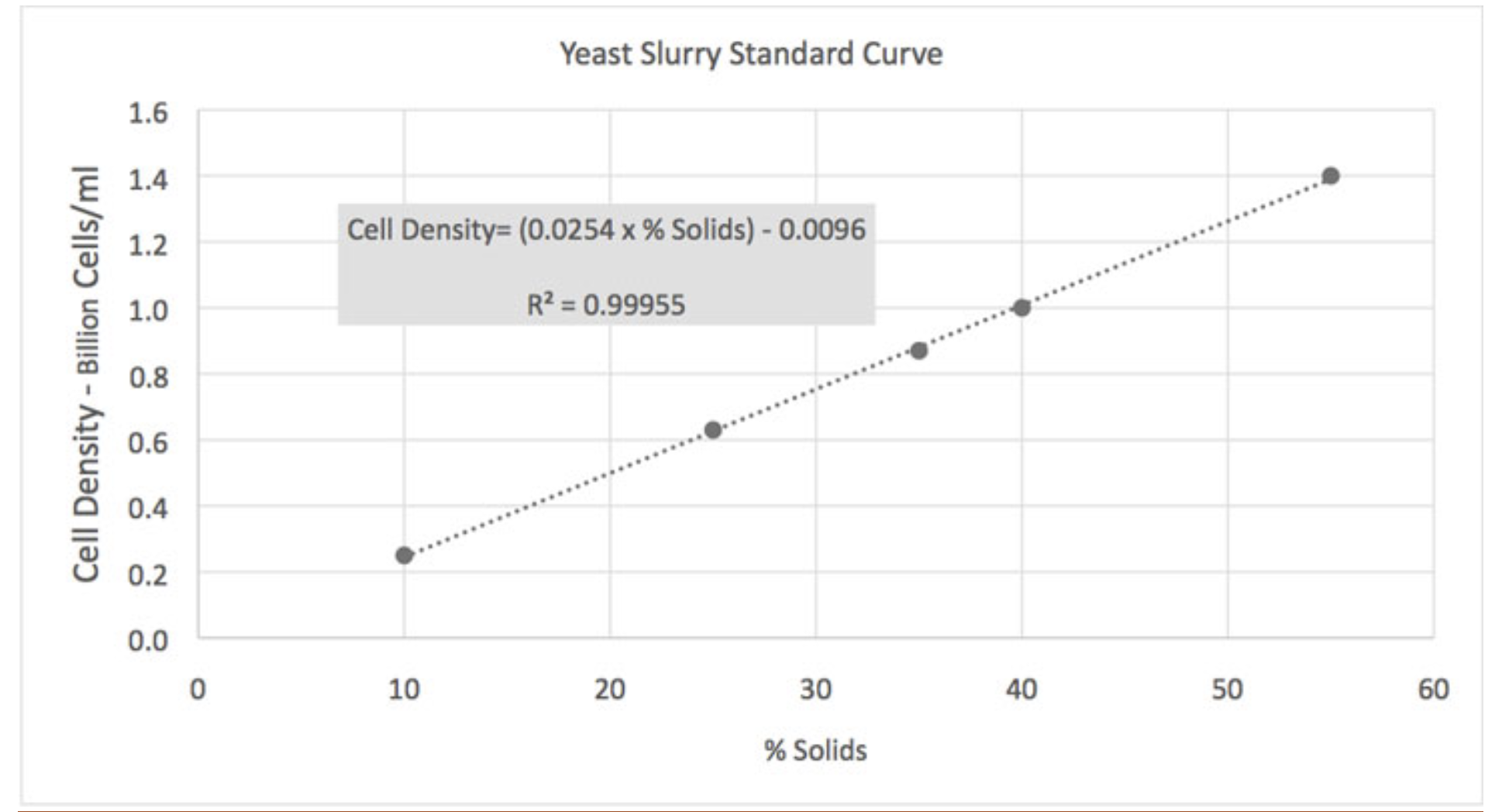 The steps are pretty straight forward. Swirl your sample to suspend all the solids (the accuracy of the process is much higher if your sample comes from a fresh starter rather than a harvest which likely has "other" solids like hops or adjuncts). Pour 100ml of the suspended slurry into the graduated cylinder. Put the cylinder in the refrigerator for 24 hours to settle the solids. The next day, measure the volume of the settled solids and convert to a percentage (i.e., 40ml settled, compacted solids = 40% of the sample). Use that value to enter the chart along the Standard Curve line. Move left parallel to the Y axis and read Cell Density - Billion Cells/ml on the X axis. Done.

Once you have that estimate of cell density from the chart, you can enter that value into one of the online calculators to derive a count of viable cells in that volume, and go from there to calculate how many steps you need to build up the total viable cell count for your brew session, based on type of beer and batch volume. The author acknowledges that cell density varies with different yeasts but the scale of the variance is not a significant factor. Cell compression is a larger factor, but due to their suspension in a liquid media the amount of compression is also considered to be a non-significant factor.

This seems like a reasonably easy and accurate method for estimating total cell count recommended for a brew session. It's certainly a few orders of magnitude more accurate than "estimating" some arbitrary value between 0.25B and 4.0B cells per ml. Are their any microbiologists out there who can attest to the methodology?
Last edited: May 5, 2021

I wonder how this would work for a yeast harvest from conical. I plan to do this once fermentation is complete and before I do anything else with the batches. So no additional hop matter and such will be in the slurry from the conical. I would imagine the percentage of solids would be higher than even 60% provided you stop before any actual beer comes out for that part.

I have been thinking about what I would need for equipment to get a better cell count from these yeast collections. I'm just not ready to drop that amount of funds into the setup right now. It could be in the future though. Or maybe find a local lab that could do that for me.

My yeast counting is pretty basic:
Brew 2.5 gallon batch, throw in the yeast.
Save the yeast cake in a quart jar, use about half in the next batch and reserve some of the wort to go back in the jar.
Next batch. again pitch about half the saved yeast and add mort wort to the jar.
I have no idea how many billion yeast cells there are, but its been working for me.
OP

Several complications. First, the settled solids from a normal brew session will contain some percentage of matter other than yeast cells. How much? Now we're back to guesstimating again. Washing a harvest will increase the ratio of yeast cells to trub, but once again, by how much?

Of course anything is more accurate than a W.A.G.*, but the way to get the best estimate is to start with the cleanest sample. Micro breweries with 3~5 barrel fermenters might harvest several gallons of very clean yeast slurry that isn't contaminated with trub or non-yeast solids. A 5 gallon home brew setup may only yield 200ml yeast solids after washing and decanting. The best bet for higher cell count accuracy on the home brew scale is to get high cell count samples directly from an overbuilt clean starter to avoid guesstimating.

It would be wrong to assume that a "60% solids" sample would have 50% more viable yeast cells than a "40% solids" slurry sample.

I went down a similar rabbit hole of research and came to the conclusion that for homebrewers, the starter calculators are an example of "measuring with a micrometer, then cutting with a chainsaw".

However this wide uncertainty is not so important, because "yeast cultures are nuclear weapons": Yeast Cultures are Like Nuclear Weapons | Experimental Homebrewing

The author steps through the calculations and shows how insensitive the endpoint is to initial cell count. Under pitching by 50% only reduced the time logarithmic phase of fermentation by ~90 minutes. As long as you have enough cells to "own" the wort and crowd out bacteria, you're fine. Which is why so many homebrewers end up making good beer even they underpitch according to the calculator. It just takes a bit more time.

If I was working QC for ABInbev and needed to guarantee acetaldehyde of every can of Bud Light was within 1 ppm of spec, I'd be a lot less loose with my estimates, and that's why they do to the trouble of cell counts, etc.

I asked this question a while ago and never got much of an answer. I’m interested to see what comes up here.

Yeast used to come in a vile. I never bought one. I presume one could see how much settled slurry was in the bottom of a 100 billion cell count vile. Could that give us a place to start doing visual estimates without a microscope?
OP

InspectorJon said:
I asked this question a while ago and never got much of an answer. I’m interested to see what comes up here.

Yeast used to come in a vile. I never bought one. I presume one could see how much settled slurry was in the bottom of a 100 billion cell count vile. Could that give us a place to start doing visual estimates without a microscope?
Click to expand...

White Labs vials were (some still are) said to have 100B cells AT THE TIME/DATE OF MANUFACTURE. The viability can not be more than 100%, and the accepted rate of decline is roughly 7% viability degradation per week. In theory this means that the vial would be 0% (totally dead) after about 3~4 months after manufacture. There are different opinions on how linear this degradation is. If it were true, how is it that I made a starter from yeast that was more than 1 year out of date a few weeks ago?

The point here is that, yes you could estimate the volume of yeast slurry in the settled tube and enter that on the Standard Curve chart to judge how many total yeast cells were in the vial at packaging. But that's only the first step.

If you assume that all the yeast cells WERE viable at the time/date of manufacture (some date in the past) then you can use the first step in the online calculators to determine your current VIABLE yeast cells present in the sample on the current time/date. That viability and total viable cells numbers are what you use to determine how many propagation steps you need to produce enough viable cells to ferment your batch of wort.

But the only yeast manufacturer that uses vials is White Labs, and now those vials are only for their limited release "Vault" yeasts. For accurate volume measures of yeast cell volumes (and thus more accurate estimates of viable cells in those volumes, you're going to need some graduated beakers.
You must log in or register to reply here.
Share:
Facebook Twitter Reddit Pinterest Tumblr WhatsApp Email Link

D
How many yeast cells in a beer?

Making starter, how many cells in this wash?

Yeast Slurry Starter- How many jars?