Get To Know Your Yeast - Fermentation Phases

I remember as a new brewer it took me quite a while before I understood exactly what was going on inside the fermentor while I anxiously waited for my latest batch of beer to be ready for bottling. Eventually I did learn that a lot of the flavors that develop in a batch of beer are contributed by the yeast, those flavors taste great when the yeast is healthy, not so much when the yeast is stressed out. Today I still see posts on beer forums, from both new and conditioned brewers alike, questioning why they ended up with off flavors in their beer and how. 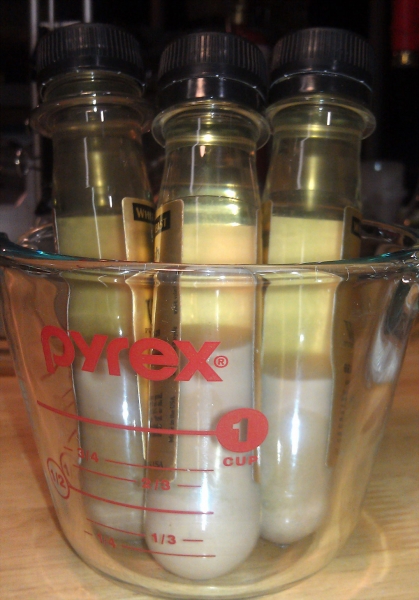 Looking back now, if I've learned anything at all about yeast and beer fermentation, it's that the fermentation process shouldn't be looked at as a single process at all. When you look closer it's actually the combination of four separate processes, or unique phases, that take place from the second you pitch your yeast until you've racked the last ounce of beer from the fermentor. Each of the four phases play a key role in producing a great tasting beer and knowing how to provide the optimal conditions needed for each phase of the fermentation will make off flavors a thing of the past.
Phase 1 - The Lag Phase

The lag phase begins the moment you pitch your yeast and it's one thing we as brewers need to keep as short in duration as possible. During this phase the yeast cells are using the sugars and oxygen in the wort solely as food to boost up their energy reserves, they won't be converting anything to alcohol until they've been very well fed. As long as you don't stress the yeast out during this phase, with temperatures that are too high or with too few healthy cells to do the job, the lag phase will be short. The length of the lag phase is an indicator on how the remaining fermentation phases will go. Generally speaking increasing the time it takes the fermentation to complete also increases the amounts and types of off flavors, like diacetyl, that are likely to develop that may or may not ever condition out of a beer. Phase 2 - The Growth Phase
The growth phase starts as soon as the lag phase ends now that the yeast have stored up enough energy they're ready to start multiplying and creating more cells. During the growth phase you'll see foam beginning to form on the surface the wort caused by the production of carbon dioxide. As the yeast cells begin consuming the oxygen in the wort and producing Co2 the pH and oxygen levels of the wort will both begin to get lower. At this point if you've pitched enough healthy yeast cells, at the right temperature, into well aerated or oxygenated wort the lag time since first pitching the yeast should be 6-12 hours. If everything has gone right up to the end of this phase there will be enough viable yeast cells full of energy and ready to kick off a very healthy fermentation.
Phase 3 - The Fermentation Phase
The fermentation phase begins as soon as the growth phase has completed and it's triggered by the lack of oxygen in the wort. It's during this phase that the production of Co2, alcohol and beer flavor is at its peak, the cells are active and using so much energy that the temperature of the wort can rise 3F to 5F higher than the ambient air temperature outside the fermentor. The yeast cells stay in suspension so that they can come into contact with as many fermentable sugars in the wort as possible. At this rate the wort will run out of sugars for the cells to eat within 3-7 days and at that point the yeast cells will begin to flocculate out to the bottom of the fermentor. Higher temperatures during the fermentation phase will produce more esters, or fruity flavors and aromas, like the banana flavors in a Hefeweizen for example. 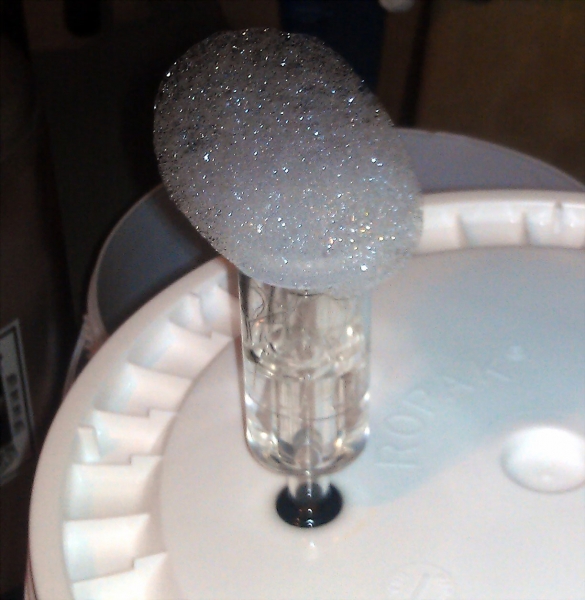 Phase 4 - The Sedimentation Phase
The sedimentation phase is the final phase of the fermentation process where the yeast cells have eaten all the fermentable sugars in the wort, now the yeast cells start consuming let over flavor precursors like diacetyl that will produce off flavors in your beer. It's during this phase that the yeast cells prepare to go dormant by storing up energy reserves for their deep sleep and then dropping out of suspension and settling at the bottom of the fermentor. All but the most advanced home brewers typically flush the dormant yeast down the drain as they clean out their fermentor but if handled properly the left over cells can easily be washed, stored and reused many times over.

The amount of diacetyl and other off flavor causing precursors left for the yeast to consume is completely dependent on how well the cells were treated, or mistreated, during the first three phases of fermentation. Raising the temperature of the wort in the fermentor 3F - 5F during this phase and holding it there for at least three days before packaging your beer also reduces off flavors. The yeast will only convert the flavor precursors it created earlier if the fermenting beer is warmer than it was when the yeast cells originally created them. There are limits though since the yeast can only cleanup so much before they go dormant and once they are dormant any flavor precursors will be left in your beer to produce off flavors.
Vince "ScrewyBrewer" Feminella
www.thescrewybrewer.com
***
Vince is back teaching us all about the greatness of yeast. A beloved contributor, and friend of the community, please be sure to subscribe to Vince's blog to get the latest and greatest from this Screwy Brewer!

There is incorrect information in this article. There is no separate lag phase. The Crabtree effect says that in the presence of a >.5% glucose solution (like wort) fermentation will begin immediately. It would be great if this info could be corrected so the myth does not get perpetuated.
Good primer for new brewers overall, but I don't think we can blanket say that "we as brewers need to keep [the lag phase] as short in duration as possible." This growth phase is where a lot of the flavors we associated with beer are created. I like to see a lag of 12-18 hours for my beers, and I don't like it when it's longer OR shorter. Shorter might mean I've pitched too much yeast, and with less growth comes less flavor.
@Denny The Crabtree effect is interesting, and seems to be even more relevant in the presence of hops, I've already pulled up a few reviews on it to read later.
Do you know where I can find approximations for the levels of glucose in wort?
As for the lag phase. The term is usually used to describe the time a microbe takes to adjust its cellular processes to new growth conditions. I.E. adjust to the difference between whatever your yeast were in prior to pitching and the wort. Since, for example, dried yeast are in a much different environment than the wort, they will presumably have a longer lag as they make major adjusts to grow in the wort enviorment. If you instead grew up a yeast starter, the yeast would have been growing in an environment very similar to your wort, allowing them to adjust to the wort after pitching much quicker. Once adjusted, the cells begin growing in earnest and enter growth (log) phase, possibly growing using the Crabtree effect you described.
Accumulating the yeast to an environment similar to the wort (same temperature, sugar content, osmolarity, etc) prior to pitching would reduce lag time. That said, I haven't seen much talk about a starter providing this advantage, so in terms of home brew the number of cells pitched may play a larger roll than the lag phase, but a separate lag phase most likely does exist regardless of the Crabtree effect.
Possibly someone with more brewing knowledge than I have can speak to the relevance of the lag phase for home brew.
It would be nice to see the stages of a sour beer, like a lambic or oud bruin
"The amount of diacetyl and other off flavor causing precursors left for the yeast to consume is completely dependent on how well the cells were treated, or mistreated, during the first three phases of fermentation. Raising the temperature of the wort in the fermentor 3F - 5F during this phase and holding it there for at least three days before packaging your beer also reduces off flavors."
Thanks for offering up this info but the observations above are a bit confusing to me. In the first sentence, you speak of "the first three phases" but in the next sentence, you refer to raising temps during "this phase". Not sure which "this phase" you mean?
@gbarker121 What I mean is it's in the sedimentation phase that you get the last crack at reducing any flavor precursors created in the prior three phases. Once the cells run out of sugar to eat they'll switch gears and start absorbing those precursors and in turn cleaning up your beer. Of course the best thing is to prevent the build up of excessive precursors in the first place because there are limits to how much the cells can process before going dormant. I hope that's a bit clearer for you.
To my understanding & observations, the lag phase is the growth phase. Rehydrating dry yeast & pitching at high krausen & within 10 degrees of current wort temp shortens this phase & visible fermentation starts sooner. So I agree with shortening the lag phase. I just think lag & growth phases are one.
Union, the lag phase is a period with no cell reproduction or very little. It a period where the organisms are adapting to the new environment prior to reproduction. This is true with all cultures growth. The lag phase in fermentation is both the lag phase and the growth/log phase.
Very interesting information and a good description of the process. I'm a rookie and have only been brewing beer and fermenting cider for a year. I've started BIAB several months ago. I don't have kegging capabilities...just bottling. Oh, and I'm a Liberal Arts major...the cellular biology and chemistry is a bit mind boggling to me. If you're a very advanced brewer, chemist, microbiologist, etc, there might be some bits here for you to pick; however, I think the article is very informative to those of us that aren't there yet.
@mattmmille, haha, that's good though it's meant to inform without making your head explode. Thank you for your thoughts on this.
I never knew yeast were so complicated! Many thanks for the clarity, Screwy. So, if I've understood the essence correctly, we should raise the temperature 3-5F only AFTER the fermentation phase ie when the hyperactivity slows down and the krausen has already been formed? Currently, I raise the temperature by a random incremental amount and at a fixed time frame of 3 days after pitching. Oops.
The way yeast use their resources is quite complex and not fully articulated here. I'd like to see an in-depth wiki page or something but I doubt it's going to happen.
@skunkfunk pickup a copy of the the book 'Yeast: The Practical Guide to Beer Fermentation' by Chris White and Jamil Zainasheff, it's a great read and a very useful resource for future reference too.
You must log in or register to reply here.
Share:
Facebook Twitter Reddit Pinterest Tumblr WhatsApp Email Link

K
Pitch It, Don't Toss It! Using Yeast That's Past It's Prime