Did my first brew (10 gallon IPA) on Sunday on the new zilla. I use Beersmith and had to create my own equipment profile, which wasn't too accurate. I attempted to update the existing one for the V3 but..... my boil off was much higher...this thing will flat boil!!! It does much better than my Grainfather. I did not verify any volume markings or temp readings, though I suspect my temp readings are slightly off and will calibrate. Interesting that I could set target temp higher than 212F.

Things I don't like:
Not much....biggest complaint is the control is too low. I brew in a small area of the garage and have to move things around so my GF and this Zilla are sitting on plant dollys. I can't read the control without laying on the floor so I had to build a stand to elevate it about 14 inches. It works nice for rolling over to the sink and dumping the trub that won't pump out....another minor thing I don't like and wish it had a bottom drain like the GF70 but for the price, forget it.
I don't like immersion chillers but that wasn't a factor since I use a Blichmann Therminator anyway. I will definitely be putting a sight glass on it at the drain outlet. Simple add with a SS Tee. I wish there was a good way to temporarily store the lid....I like hanging mine on the GF lid clamps. Oh, and it is sturdy....it fell and I was freaking out but no damage.

Things I like:
Very quick to heat and really gets a good boil going on 12 gallons. Pump is strong...I pump ice water thru the Therminator but still had to throttle back the Zilla pump to get my target temp after a 15 minute whirlpool. I bought the whirlpool attachment and like it. It takes a couple minutes to get the whirlpool going well but it moves along. I had a pretty good cone on the plate. The deadspace volume under the plate is a little more than I guessed (another equipment profile mistake) but not bad. I'm used to a 70 qt cooler at an angle for the outlet with a bazooka tube and I have no loss with that method. And the GF is very easy to tilt and see since it has no bottom plate. I like camlock fittings and the fact I didn't have to convert this like I did the GF. Who needs that safety ball valve anyway.

So I give this a big

as long as you can deal with the control location and are willing to add a sight glass. As for the inability to wifi control the thing, that was not even a consideration. I ain't that lazy or that damn busy. I prefer hands on.

Now somebody please help with an equipment profile!!!!

Switch over to Brewfather for recipe creation and brewday timer. It has a Brewzilla profile.

Uggh....I have hundreds of recipes in Beersmith for the store from customers....Not sure I could make that switch. How about just posting the profile

You can use this. You should do a water brew to determine what your boil off amount is.

I prefer to keep evaporation to under 8% so I only use the 1000 and 500 watt elements with the cover on.

For the grain I use, I found that milling at 0.028" gives me the best efficiency. I do use rice hulls. I recirculate fairly slowly. You will need to get a few more brews under your belt to really fine tune the profile.
OP

I understand...took a few with the GF. thanks a lot
S

After brewing about 50 batches of 5g on traditional cooler/turkey fryer system, I just got the 65L system set up in my new brew room. Hoping to get a first batch going this weekend. Likely have some questions for you guys next week!

Appreciate any words of wisdom from tips and tricks to Brewsmith. Going to check out your settings above.

I suggest doing a water brew to determine your boil off rate. If you are going for no sparge, the boil off rate will determine how much water you mash in with.

I mill fairly tight. I have found that .028 works out well.

After mash in, let the grain sit for about 10 minutes before you begin recirculating. Keep the recirculating flow fairly slow.

Good luck and have fun.
S

Great ideas. How do you run your sparge?

Feel like after mashing in for an hour, I would lift the pipe then cycle the existing wort back through to pump for a while clear up those initial 4-6 gallons. then just pour remaining 5-7 gallons of 168 water over the top of the raised pipe for the sparge?
S

Did a first batch today. Pretty amazing machine! Going to take some tuning. Did a 1.084 cascadian dark ale. It was 33.75 lbs of grain which simply didn’t fit. Should have started with a smaller beer. 8oz of leaf hops in a stainless hop sleeve was an over load too! Oops... stuck sparge w/o rice hulls and .0375 grind.

Guessing w a smaller grain bill the temp from top to bottom will be more consistent during mash. Great boil. So easy to use. Little bummed about not being a super clear boil. Huge settle out in primary after 8 hrs. Seemed efficient 11g target at 1.084. Got 1.080 w 11.5 g. Started at 14g preboil at 1.060

Looks like it will be a fun machine!
I

Has anyone used a counterflow chiller with the Brewzilla 65L? Curious if you found the internal pump strong enough or had to use an external pump such as Riptide or Chugger?

I use a Northern Brewer SS Counterflow with my 65L Brewzilla.

I use it to lower temps by recirculating from boiling to 165F for whirlpool hops and then direct to the fermenter at 65F after a 10 minute rest. I do not use an external pump. 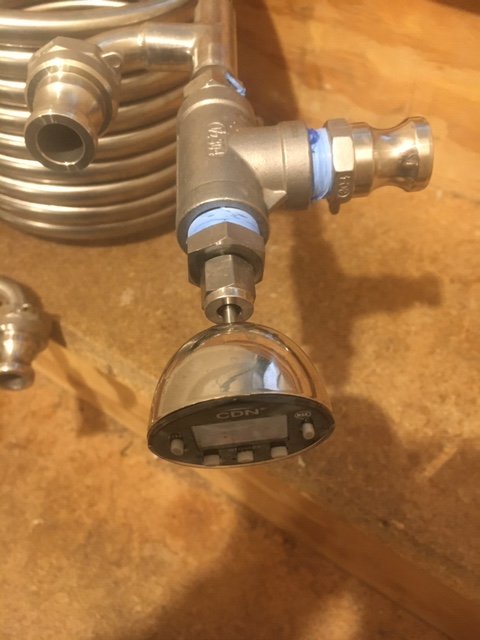 Pump seems strong. I use my grainfather CFC with some creative connections. I do have to babysit the mash with this system more so than with the GF. seems like the heat doesn't kick in until it's 2 degrees below my target then doesn't shut off until a degree or so over. i basically manually flip the heat on and off for the first 30 minutes of the mash until the temp stabilizes.
You must log in or register to reply here.
Share:
Facebook Twitter Reddit Pinterest Tumblr WhatsApp Email Link