Brewing on the Edge of the World: Canada's Arctic - Part II

NOTE: This is the second part of a two-part article. The first part can be found here: Brewing on the Edge of the World: Canada's Arctic - Part I
Now, I will cover my brewing practices, as made necessary by my environment. But first, a few notes on that environment. 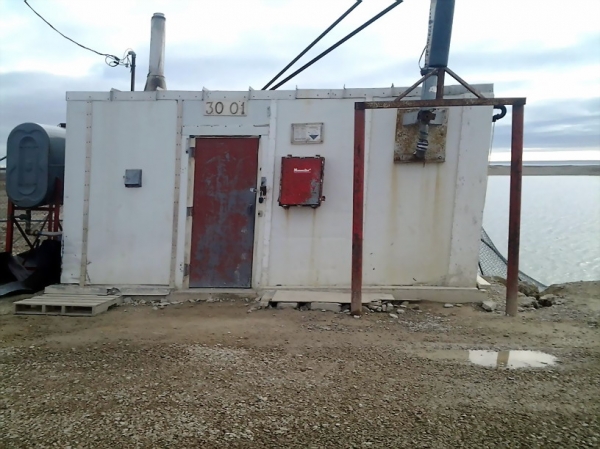 Igloolik Reservoir Pump House
Water is, I'm sure we can all agree, the most important ingredient to brewing beer and wine. As such, the quality of the water is important. I will admit, that I haven't read any of the many posts regarding water quality, water analysis, water treatment, or water sources. I haven't read them because up here, there are three sources of water, and treating them isn't something I'm capable of. The three sources of water are:
Tap water
Water from the tap is delivered to our homes via large tanker trucks. There is a flow switch which activates a light outside the house when the water level is low, and when the light comes on, any passing truck knows to stop by and fill it up. This water is picked up at the reservoir, which has a few chemicals added to it somewhere between the open body of water to the truck. The pump house is shown in the above photo. This water, while potable, isn't necessarily the best. We often find bits of sand at the bottom of our glass, and once in a while has a slight yellow tinge to it. Just recently, there was a Boil Water Advisory. Though that has since been resolved, I have switched to using reverse osmosis water from the stores.
Because the water in our homes is limited, I don't use a wort chiller. The only way I could use a wort chiller is if the water could be run back into the house tank. While this is possible as the delivery pipe is just outside my living room window, I'd rather not keep my window open that long in the middle of -60 C winters.
Store Bought Water 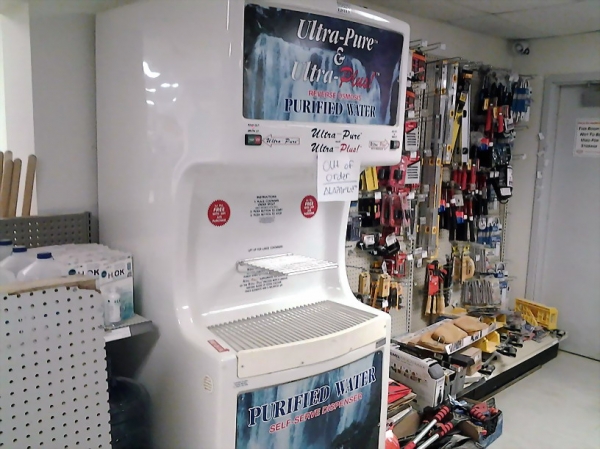 A dependable source of water at the local store (!)
The reverse osmosis water you can buy from the store goes through several filters before it comes to you in half-liter "squirts". You simply place your water jug/bucket under the spigot, and every time you press the button, half a liter gets squirted into it. This takes time when you need a 6 gallon bucket filled, but at least I know the water is clean. If I don't want the town to know that a batch of beer or wine is about to get made, I'll simply use the 5 gallon water jugs you can buy at the store. I made the mistake of filling up the Ale Pails directly one time, and everybody I passed by knew what was about to happen once I got home. The following week I had received so many phone calls from people looking for some drinks that I made sure to always use unmarked containers after that, but at this point people know what it means when I'm picking up water.
Ice and Snow 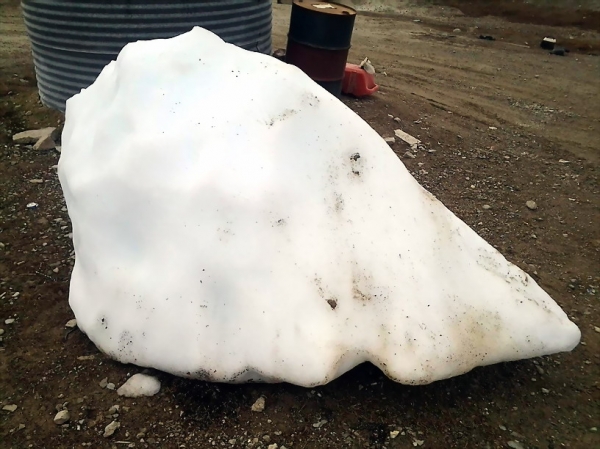 A more dependable source of water in the Arctic
As shown in this photo, people will have large chunks of ice hauled in out of the sea, and leave them outside their homes. The locals are able to tell the difference between fresh and salt ice, and so they use the fresh water blocks for their tea and coffee. I've tried using this in a batch of beer once. While the Cerveza turned out great, the effort involved in collecting enough snow and ice to melt and boil for a 5 gallon batch was simply not worth it. I have since vowed to stick to the RO water from the store.
My Keezer 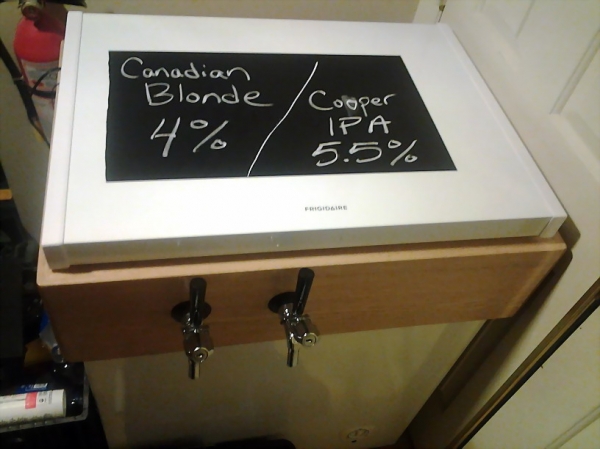 After I recalculated the costs, it was close to two grand!
It took some doing, but I finally managed to build a keezer for myself. Given the shipping rates I paid for the parts, and the cost of the freezer from the local Northern store, I wound up paying just about $1750 for a 2 keg system.
I noticed that of every 5 gallon batch I made, I was able to drink 6 bottles. The rest seems to have grown wings and flown away on their own. Between people helping themselves, and my little brother trading them off to the weed dealer, they weren't lasting that long. I needed a way to keep this liquid gold inside the house. So I began purchasing piecemeal parts to build this keezer. It took several months (6 months for the CO2 in transit), but it's finally complete.
Now I'm the ONLY guy in town with cold beer on tap! There's nothing quite like coming home after work and being able to pull a pint into a glass. And the best part is, I can put whatever I like into those kegs!
Want an IPA? It's a little hoppy for my tastes, but it's there. A Cooper's Canadian Blonde is a great refreshing beer to have with dinner. The stouts I still put into bottles, but the Brewer's Best Summer Ale is great in a keg! (never mind summer, we go from Spring to Autumn here). 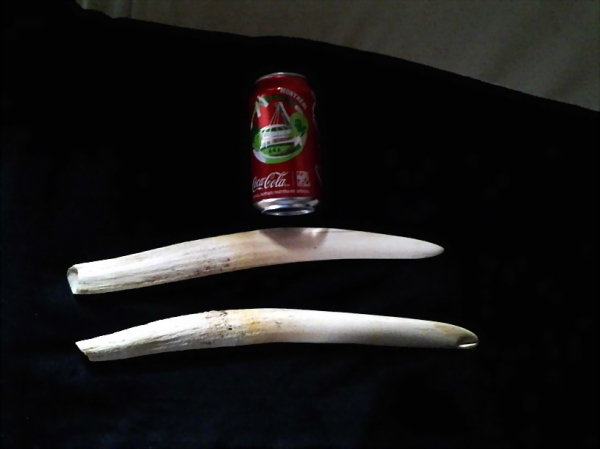 I was given these tusks because somebody heard I was looking for tap handles
I've even got my mitts on a pair of walrus tusks, which I plan on having made into carved tap handles. Problem is, the GOOD carvers will cost quite a bit. But I don't want just any old hack working on these tusks, they're valuable even in this untouched state.
About a third of the cost of this keezer was the CO2 tank itself. Not only did I have to find a place in Ottawa that sold them (which was easy enough), I had to pay another homebrewer to pick it up, pack it for shipping, and deliver it to the airport with the appropriate paperwork. Then comes the Dangerous Goods paperwork (which has an upfront cost), and the cargo shipping fees. This 10 lb tank cost me $455 all told. Talk about motivation to prevent leaks!
Having a keezer, however, poses another problem. It's another target for break-ins. If it gets around that there's 10 gallons of beer available on tap, then it's another reason for me to lock the door at night. The tap locks were a necessary expense (at $70 each for the model that fits a 630ss, PLUS shipping!). These locks also prevent all the sudden guests and visitors we have from being able to help themselves. Unfortunately, my mother (who lets me live here rent free, so I feel obligated) expects me to be a good host and allow HER guests to have all they want.
High cost of Power 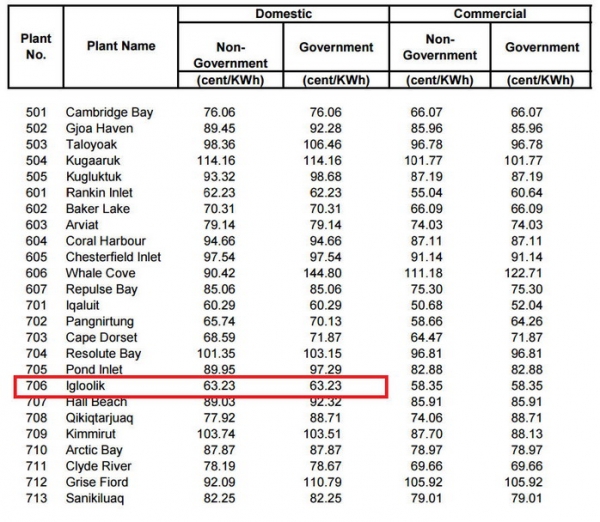 Don't leave the TV on if you're not watching!
This one is fairly straight forward. The cost of power in Igloolik Nunavut is very high at $0.63 per KwH. This means that our electric stove should NOT be used for extended boils, especially given how many watts you'd need to bring a large pot to a boil. It is for this reason I only boil about 1 gallon of water to mix in the sugar and LME kits.
This is also the cost of my keezer's power. This appears to be listed at 242 KwH/year, so it's not so bad, assuming the STC 1000 doesn't affect this number too much.
Just running my customized Alienware gaming computer (I tend to game around 8 hours a day at least) causes my hydro bills to come up to $700. This goes up if my brother is home playing on the Playstation downstairs.
Outdoor climate and weather

Kids still walk to school, but southern kids get "snow days"
The temperature outside can reach levels as low as -60C, if you include humidex and windchill. This means that I can't do outdoor boils. The land around is quite flat, which makes the wind a ferocious beast that's constantly battering on the doors and windows of our homes. Even if I had access to propane, the heat would be blown or drawn away from the burner and pot. Manufacturing a sort of flashing around the burner and pot would further add to the costs. I have simply resigned myself to sticking to the pre-hopped LME kits I can buy online.
This outdoor weather could provide an alternative to wort chilling. But since I use the pre-hopped LME kits, there is no need to chill the wort. 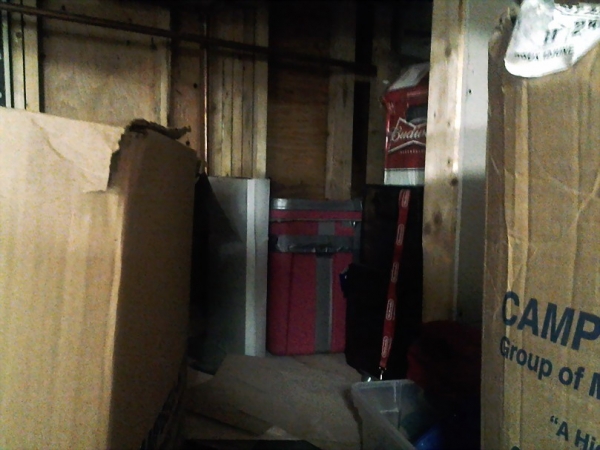 Overstuffed crawlspace
In the middle of winter the crawl space under the floor by the front door makes an excellent location for lagering. This area is usually between 6 and 13 degrees, depending on how close to the hot water tank I want to get. Due to the CO2 that comes out of the fermentors, I'm unsure if it's a good idea to have it close to the hot water tank at all, so I haven't tried to lager more than twice.
Northern built homes
Homes built in the arctic are usually on a budget, which means large spacious homes are a luxury nobody can afford. If you want storage space, then you're meant to build a shack of your own somewhere on your property. Many people use the plywood and lumber from disassembling their sealift crates, or scavenge the lumber from "Canadian tire" (the dump). A few have purchased the sea containers and use those as their sheds.

Average yard, complete with homemade shed and vehicle for spare parts
These aren't heated, so these are for storing excess furniture (you can afford excess furniture? Rich family indeed), hunting gear, tools, spare parts and other such items.
Inside the homes, there isn't much space for storing brews. I currently use my bedroom closet for storing bottled goods. There is a crawlspace near the back door I use to store empty bottles, fermenting brews that are kept at room temperature, and unused brewing equipment. In my case, this equipment is limited to Ale Pails, hoses, stir spoons and siphons.
The smells that come out of the fermentors are able to spread out to the whole house. If you were to visit my home during the fortnight after brew day, all you'd smell are the gasses coming out of those buckets.
Propane
If I were able to brew outdoors, or even in the nearby shack, I wouldn't have the propane to do it. Given the headaches that getting a can of CO2 up here caused, I do not want to try getting propane. I could get a canister of it through the sea-lift, but I don't want to have to buy a year's supply of it.
There is a source of naphthalene gas, but everybody in town seems to use that for their Coleman stoves. I don't want to compete with the hunters, trappers, and those who live out in cabins for this gas just to make something I can do on my kitchen stove.
Brewing 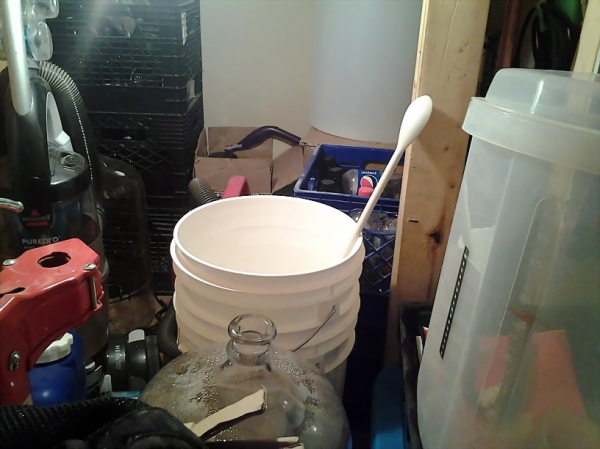 J
Brewing on the Edge of the World: Canada's Arctic - Part I
2

A
Funk In The House Part II