Would it be better to just use a Blowoff Hose into a bucket of water instead of even bothering with a Airlock? Seems to me that with a Blowoff there would be much less chance of a mess. Or is there some benefit to the Airlock that I've missed?

What size/style is your fermenter?
What is the original gravity of your beer?

Yep- it depends. I use a blowoff to start with for hefeweizens and switch over to an airlock (they are so cheap ~$1.65 at LHBS) and most of my ales I just use an airlock.
The airlock takes up less room and so I prefer that unless I know there is going to be crazy activity.

It doesn't necesarrily depend on your carboy size...I had one blow over that the carboy should've been able to contain. What I typically do is if I'm doing a high gravity beer like a Barleywine, I just immediately use a blow off tube. This is not to say that low gravity beers won't blow over...had that happen too. What I usually do for a "normal" gravity beer is I monitor the fermentation activity, and if it seems to be getting closer to blowing over, I will just replace the airlock with the blowoff tube.

I use foam control drops and have had only one blow off in my 6 gallon Better Bottle ever since. That was with a 1.110 RIS. I know some don't like the foam control drops, but they don't bother me or my beers. It can never hurt to start off with a blow off tube if you suspect you'll have one and then swap to an airlock if you don't.
K

After blowing the airlock clean off the carboy in the middle of the night on my first brew, I start with blowoff tubes now and then switch back to an airlock (takes up less space) after a few days.

I use a blowoff all the time because doing so costs me nothing and there is no downside for me IMHO. I'd love to try foam control drops (for the boil as well) but none of the three LHBS stock them and I always forget when I order online.

knownikko said:
After blowing the airlock clean off the carboy in the middle of the night on my first brew, I start with blowoff tubes now and then switch back to an airlock (takes up less space) after a few days.
Click to expand...

jeff_2506 said:
It doesn't necesarrily depend on your carboy size...
Click to expand...

You mean you wouldn't be more inclined to hookup a blow off to a 5-gallon Better Bottle (for a 1.050 beer) than you would a 6.5 gallon carboy?

Seems to me that the carboy size is a huge factor.

Well when using those German and Bavarian wheat yeasts, the choice is clear. 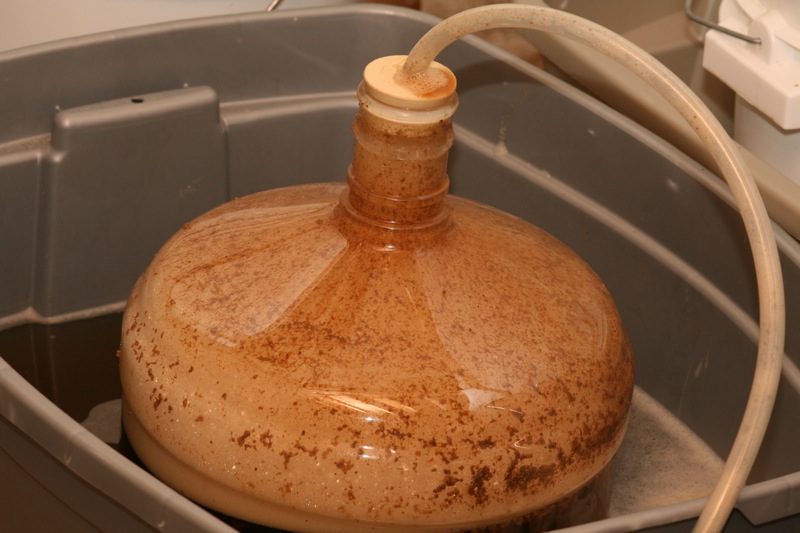 I had a similar question for someone who has possibly brewed more than 2 beers, and since it has to do with airlocks and blowoff hoses, i thought id keep it in this thread instead of starting a new one..


I made a beer last friday (8/22) and immediately put a blowoff hose in it (guess what happened to beer #1 in a 5gal carboy and an airlock? ) instead of an airlock.

Its not Tuesday, and I know, I know, "Fermenatation can take up to bla bla bla bla to start bla bla." And I have not heard a peep from the beer (Which is a robust porter, by the way, from Brewer's Best.)

So, the question is.. does using a blowoff hose make it "harder" or take "longer" to notice active fermentation than using a simple air lock??

For me: Air lock in the cellar or garage.Blow off in the living room......Keep SWMBO mellow at all times.

People who use ale pails instead of carboys: How do you rig your blowoff tube? What size tube do you use? Regular transfer tubing? One size bigger, slipped over the center post of a 3-pc airlock?

I use the same tubing that came with my AutoSiphon, which is 3/16" tubing. Fits pretty snug inside the rubber grommet. I run that into another 5gal bucket of sanitizer. No airlock at all, though ive heard that works well.

Chriso said:
One size bigger, slipped over the center post of a 3-pc airlock?
Click to expand...

1/2" ID fits perfectly. Probably a good idea to snap off the "cross" at the bottom of the airlock.

My Delirium clone took four+ days to start blowing off, so you're not for sure in the clear after the first couple days.

flyangler18 said:
Well when using those German and Bavarian wheat yeasts, the choice is clear.

SteveStLoo said:
So, the question is.. does using a blowoff hose make it "harder" or take "longer" to notice active fermentation than using a simple air lock??
Click to expand...

flyangler18 said:
Well when using those German and Bavarian wheat yeasts, the choice is clear.

My hose is bigger

Well, MY junk is prettier. :rockin:

My hose is tiny.

My hose keeps shriveling up and falling off?
W

B
Blowoff hose to airlock