I just bought a new Tilt so that I can track fermentation and more easily know when fermentation has reached the point where I want to add dry hops. Problem is, as expected, it's kinda hard to get a radio signal out of a SS fermenter. Sometimes I could and sometimes I couldn't--my guess is it depends on where the tilt is relative to the hole in the top where I put my blow-off tube.

So here's an experiment: Bluetooth wavelength is about 13cm, or 5 1/8". So I took a piece of coated garden wire (this is an experiment) cut to 5 1/2" and bent a little hook into one end. The hook keeps the wire in position in the blow-off tube. The overall length is now 5 1/8". (photo of this attached.) Next I bent it into an "L" exactly in the middle. The hooked end goes into blow-off tube and free end extends into the fermenter, with the bottom of the L parallel to the inside surface of the fermenter top.

Does it work? First test says yes--I got Tilt data "immediately" where before I often had to wait 30-40 seconds. But I'm really not sure yet. More data gathering will tell. 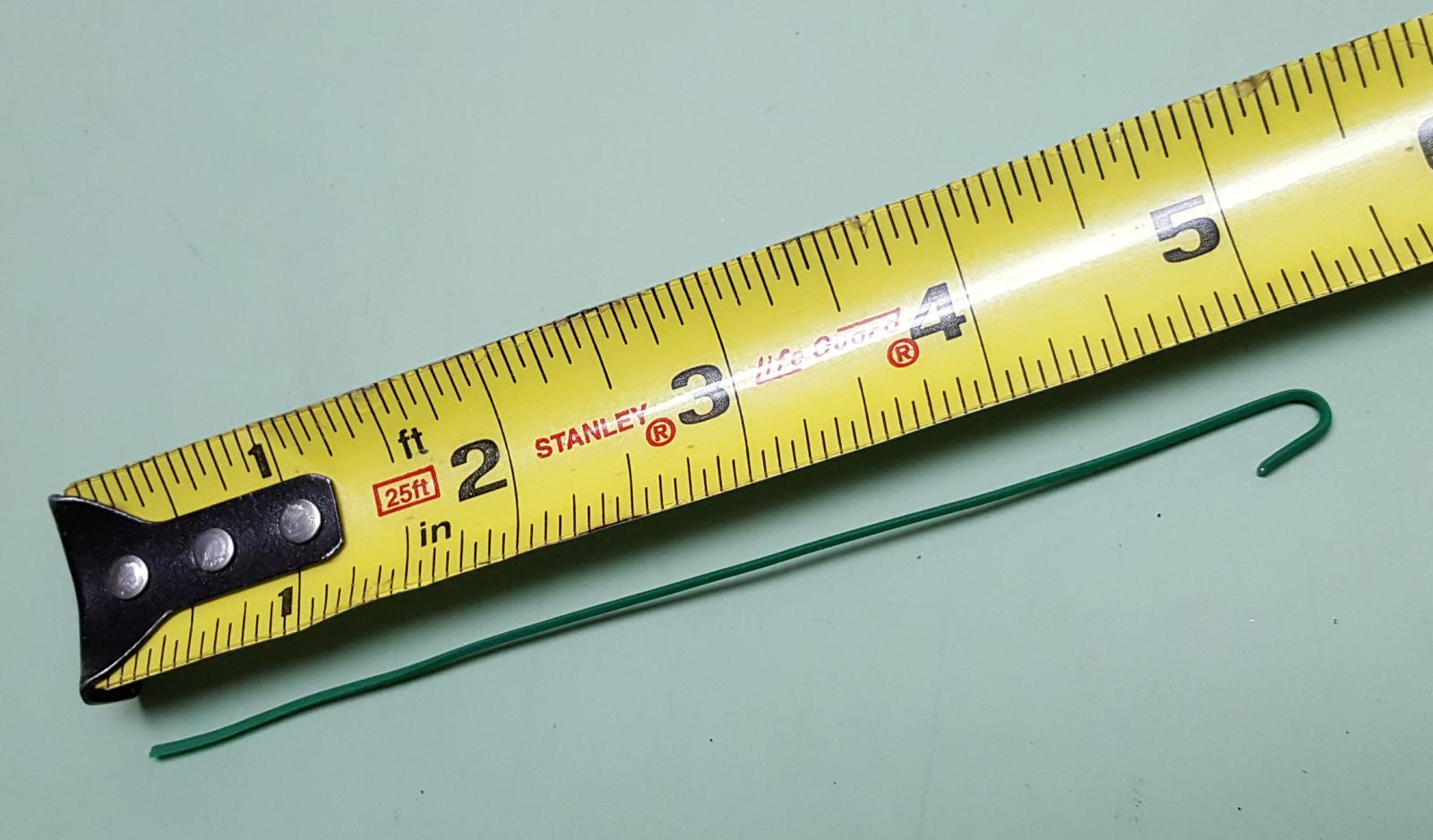 You'll do (even) better if the extension of the wire into the fermenter and outside the fermenter is a quarter wavelength, so that each end resonates correctly. As a bonus, this means that the wire is shorter.
OP

dyqik said:
You'll do (even) better if the extension of the wire into the fermenter and outside the fermenter is a quarter wavelength, so that each end resonates correctly. As a bonus, this means that the wire is shorter.
Click to expand...

Yeah, I went with 1/2 wavelength thinking that more "antenna" inside the fermentor might help. I'll try shorter on the next attempt.

I'm planning to do this through a rubber stopper that's 1" thick.

Do I add that 1" to my antenna length? Or is the important part that I have exactly 50% inside the fermentor, and at least "some" sticking out?

Also: What's the ideal antenna material? Is it based on conductivity, so copper? Or something else? Steel?

I had a double-batch (12gal) inside a half-barrel where I used a tap as the airlock and, apparently, that was just too much metal between my Tilt & phone -- because I got nothing the entire time.

Hence, I'm now hoping to over-engineer the highest-fidelity solution. (I realize that just switching to the rubber stopper should probably be fine, but I still want to go for strongest signal.)

Also: is it ok to do a full-wavelength? Better? Worse? I actually would like a little longer, because of the shape of my operation.

I'm curious to hear more about people's experimenting with this. I ferment in sanke kegs with the original spear in it. The 3 times I have tried using the tilt I can get a signal when I first drop it in, but then I can't get a signal. I think this is because I am initially connecting to it before installing the spear in the keg.

I strongly suspect (I also wanted to use in sanke kegs) that it's the steel blocking the signal.

I had grand designs on making a rubber stopper with a correctly-sized BT antenna inside & out, but never got around to it. If you do such a thing (there's a thread around here, somewhere, about how to), post your results!
S

Has anyone done any more work on this? I ferment with a 7 gal Sanke and I’m not getting a signal from the Tilt.

I have not done anything, but saw this article:

Extending Range in Stainless Fermentors with the Tilt™ Repeater

Updated: July 6, 2019 with new how-to video The Tilt repeater does what it sounds like. It repeats a Tilt hydrometer signal that is in range improving weak Bluetooth signals due to stainless steel, foam, refrigerators, and other signal blockers. It notably improves RF performance in stainless...

Also, I can't find it now but, a few years back, someone posted a blog about how they managed a BT-antenna through a rubber bung that they used. If I find it, I'll post that, too.
B

I have 2 tilts. I use them on a grainfather conical and a blichmann 7 gallon conical. Both only had about a 3-6 foot distance. Adding 2 repeaters worked like a charm. Probably 50+ feet through the walls. Good addition.
S

Thanks guys. I’m not getting a signal even with my phone laying on the fermentor like they show with the repeater. If I take the cap off the keg it connects but not with the cap on. I’d consider the repeater if I was sure it would pick up the signal through the thicker stainless of the Sanke keg but not sure it will if my phone can’t connect. Hard to spend the money unless I know it will work. I did play with the wire antenna idea shown at the beginning of this thread and was randomly able to connect a couple times.
T

On the web page they "guarantee satisfaction" with their repeater.
I have found them to have excellent customer service, I have no doubt they would accept a return if it failed to work for you.

FWIW, my latest-generation Tilt works through a jacketed conical with a 3mm wall and a 1.5mm shell. But my Kindle has to be right next to, or on top of, the fermenter.
OP

A metal fermenter is a shield (farraday cage, essentially) for radio signals. The signal has to come through the gaps in the metal where there are seals, etc. This is why I was fiddling with a (electrically) floating antenna--an unconnected piece of wire with half inside the fermenter and half outside. IIRC, my best result was with 1/4 wavelength inside the fermenter and 1/4 outside. (Post #1 and #3.)

If your configuration would benefit from such an antenna, then how and where to put the "antenna" is a puzzle that depends on the specifics of the fermenter. I would expect a single wire of 1/2 wavelength exactly positioned half inside and half outside the fermenter to have the best performance.
B

I did also use it in an brew bucket. It worked but distance was limited to the same 3-6 foot range. I keep the repeaters on the lid. It doesn't seem to matter if close to the airlock.
S

I think I’m going to try the antenna trick. I’ve got the hardware to play with so it’s free to try and a chance to tinker.
T

Odd. I have both the Brewbucket and a Flex+. Both sit in a freezer. With my phone lying on top of the freezer I get solid readings on both. No repeater. I wonder if tilt has some quality control issues. Love mine.
B

Anybody have an idea on how the performance of the tilt is related to battery strength? Does the signal strength.decrrase as the battery gets weaker or is it there full range, then not there at all as if it turns off?
I reason I ask this as I have not let the battery die before I replaced it. Preventative replacement to keep the data flowing.
S

The Lousy Hunter said:
Odd. I have both the Brewbucket and a Flex+. Both sit in a freezer. With my phone lying on top of the freezer I get solid readings on both. No repeater. I wonder if tilt has some quality control issues. Love mine.
Click to expand...

I wondered about that as well since I’ve seen others use it in similar applications. I emailed them a couple days ago but haven’t heard anything back.

BrewAgain said:
Anybody have an idea on how the performance of the tilt is related to battery strength? Does the signal strength.decrrase as the battery gets weaker or is it there full range, then not there at all as if it turns off?
I reason I ask this as I have not let the battery die before I replaced it. Preventative replacement to keep the data flowing.
Click to expand...

The tilt uses the CR123A battery. The last company I worked for, we designed these batteries into all of our wireless products. I have done ass loads of battery draining testing of these batteries. Since it is a lithium battery it's voltage stays "relatively" constant throughout it's life so you shouldn't see any decrease in signal strength until it's at the last 10% of the batteries life. It will start out at 3.1-3.2V. then in the first 10% of it's life it will droop to 2.8V, then clime back to 3.0V until it drops off the cliff at the last 10% of it's life. Additionally larger current draws from radio transmissions will only cause the voltage to droop if you are at the end of it's life as well.

Edit: panasonic owns patents on this battery. They do sell them to other companies to rebrand. However, there are counterfeit ones out there. The genuine ones have a black plastic "washer" on the top of the battery with a hexagon opening. And if you peal the wrapper off you will find a green plastic washer on the bottom.
Last edited: Feb 23, 2021
You must log in or register to reply here.
Share:
Facebook Twitter Reddit Pinterest Tumblr WhatsApp Email Link

J
Tilt Hydrometer in the mash?