I'm looking into expanding out of the 5 to 15 gallon brew session into a much larger amount of liquids...

I'm throwing around the idea of plastic fermentation vessels. I know that there are Better Bottles, which are plastic carboys, and people ferment in buckets all the time. But what about the plastic equivalent of stainless steel conical fermenters

How could I aerate on the cheap?

My questions beg for answers

From my research, there are pitfalls aplenty.....although I wouldn't consider them pitfalls so much as adjuncts that are almost sine qua non when going in the direction you are thinking about. The first thing to consider is plastic vs. SS. There's a good BBR episode (Available on the Basic Brewing Radio website) on conicals. But it's not just a matter of material. Conicals go together with refrigeration, kegging, and a general increase in volume beyond the usual 5 gallon batch. [Note: Yes, I know they sell small conicals- but that's not really my point here, since the OP also talks about ramping up volume....which is the only way I would consider conicals.]

Apart from sanitation, the other element of your brewing process you must control is temperature. Larger volume means temperature control becomes so problematic as to almost mandate a dedicated refrigerator, unless you're going to invest in a fermenter with a glycol jacket (which is just refrigeration in another form). So- you're well over a $1K investment in a 15 gal. SS conical fermentor & refrigeration, and these days that's probably used.

When I first started investigating conicals, it quickly became obvious that it entailed moving to a whole new level of brewing.....where, at present, I have no intention going.

Bad Link? Nothing coming up...

I did see a post here once and they had large stand up fermenters with screw on lids. I cant find it now... 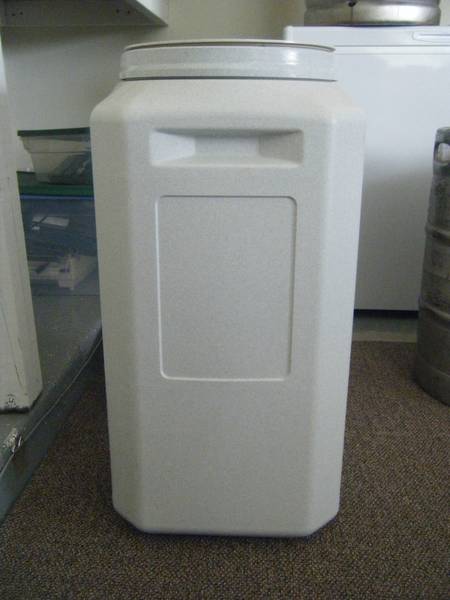 Thats the general question. What issues do you run into while scaling up your brewing operation? Is there a difference between building a 15 gallon conical and a 2bbl conical?
C

OK, I see the temp controller, but how are you cooling that bad boy?

digdan said:
Thats the general question. What issues do you run into while scaling up your brewing operation? Is there a difference between building a 15 gallon conical and a 2bbl conical?
Click to expand...

Cost is higher obviously - fittings will be more.
Cleaning a 15 gallon inductor is easy, you can pop it in the bathtub or shower. Something 2 or 4x the size is more of a clean in place deal.
Everything is bigger, takes up more space, etc.

Might be easier to have several smaller tanks and split your batches. Gives you an opportunity to experiment with different yeasts, fermentation techniques, etc.

camiller said:
OK, I see the temp controller, but how are you cooling that bad boy?
Click to expand...

B
Plastic Conicals for fermentation