I've been working on my Excel Spreadsheet on and off for about a year and during creation I have ran into a few fellas also making a brewing spreadsheet. I was wondering if anyone else has created their own and if so I would love to see it.

Here is mine below:
Excel Brewers Spreadsheet 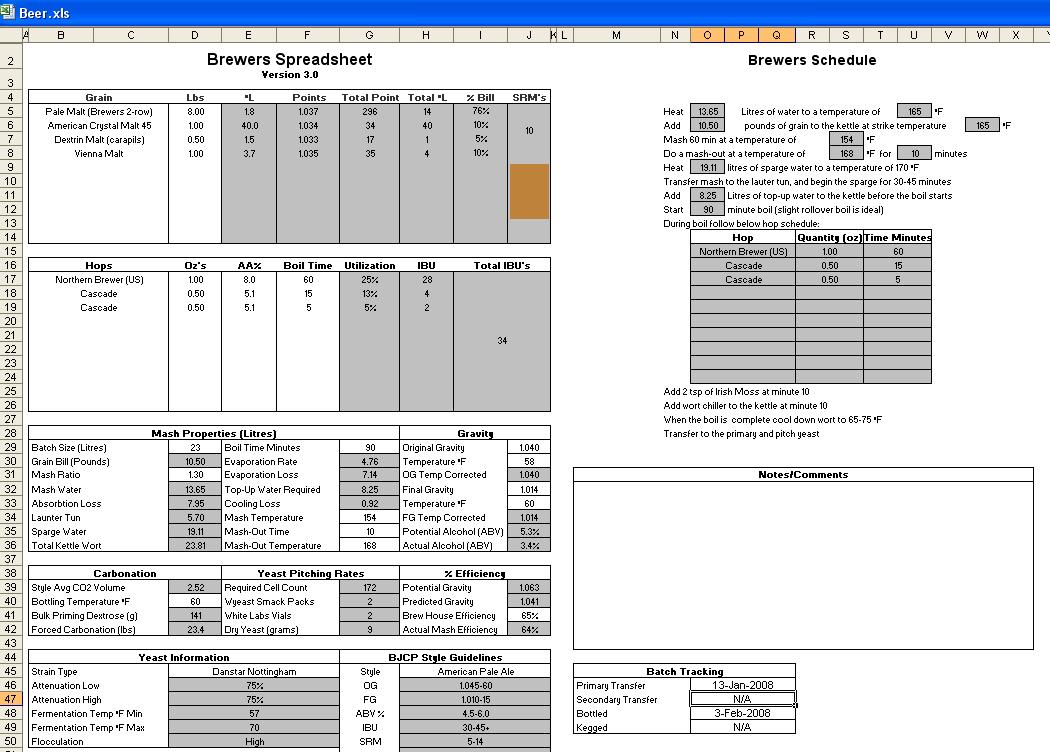 I first thought about doing something like this and discovered that BeerSmith (or Pro Mash, BTP, etc.) are out there, and decided it wasn't worth it. I really like BeerSmith!

So, I did up a quick spreadsheet to calculate a mash-out volumes that achieve equal first and second runnings for single-sparge batch sparges. You can find it View attachment Batch Sparge Water Calculator.zip .

There is an old thread some where full of links.
You or I started it IIRC.

Yours is very similar to mine. I gave up >beersmith.

i made one simply for ABV, attenuation and calculating extract additions for partial mashes. i still use it sometimes, but i never went any further. ProMash does everything i need.

orfy said:
There is an old thread some where full of links.
You or I started it IIRC.

Yours is very similar to mine. I gave up >beersmith.

Hey Orfy... Ya I was looking around for it but couldn't find it so figured I would make another post. Glad to hear from ya again

Here's what I've been developing as a fermentation log to keep track of things:

well, these are all really impressive, and i am sincere in that, but you math oriented guys are making my head hurt.

razyrsharpe said:
well, these are all really impressive, and i am sincere in that, but you math oriented guys are making my head hurt.
Click to expand...

As a math major that just made me wet my pants. I've always wondered if there was an easy way to figure how many calories were in my beer. Most of my family are health nuts so they're always asking. My old standard when they asked how much sugar, etc. are in my beer I always told them at the whole point of beer is to turn the sugar into alcohol and that they shouldn't worry about it, but now I can wave numbers in front of them!
OP
OP

I'm actually not much of a math geek, but for some reason I really enjoy doing the beer math. Anyway glad I could help you find a calculation you needed. I put the site up because I was looking all over the web for these calculations. I finally decided to make one site for all brewing math so to make life easier for myself but for the most part others getting into brewing.

Wow, as a noob I checked out the first few formulas and my nose began bleeding profusely.

Mr. Beer sure doesn't know about "degrees of Plato".

(holding nose up in the air)

Grimmy: that is a nice worksheet. I'm pretty good at Excel but can't figure out how you have done the SRM color to update automatically. Any hints?
OP
OP

Well I'm sure you could do it an easier way but this is how I did it....

First I found an SRM chart ranging in colour from 1-30. Then I did a crop and made a seperate image with the same dimensions and named them 1-30.

Next I inserted each image into the spreadsheet but I placed them ontop of each other exactly. This way I could hide 29 of the images that I don't want to show, and only show the one image (srm colour) I wanted.

Now I wrote a little visual basic code to get the images to show/hide by using the image.visible=true or image.visible=false. Hopefully you know a little Visual Basic to get you by. Now the trick was to get the cell srm number into my code from the spreadsheet. The only way I got it to work was create a list box and link the cell to the combobox. Then use the combobox1.value in my code. Now what I did was create a bunch of nested if statements like the example below:

else if Combobox1.value <=3 then
BLAH BLAH BLAH all the way to 30


Hopefully this helps you. I'm sure you can figure out an easier way to get it to work.

Thanks for the explanation. That's a pretty cool way to do it.
OP
OP

did this work for u? weetodd
M

Hey, sorry, I know this is an old thread, but it seems the link to your original excel sheet is no longer working. Is there any chance you could upload the sheet again? I'm just getting into home brewing and am looking for anything that might help me along. I also just downloaded qbrew, but I would like to try a few different methods when I begin to see what works best for me. Thanks.

Whenever it feels right!

E
Getting back into homebrewing, seeing how the landscape has evolved