There are other threads on using this process with yeast like Wyeast 3787, but I can't find some specifics on the process.

Mulcahey wrote:
I didn't use corn sugar to feed. I made a one gallon wort with 2.lbs Extra Light DME, a pound of Light Candi Sugar and some willamette hops. I was going to do two feedings to get to five gallons, but I decided to feed it one stronger 1 gal wort and end with 4 gallons. Too much work and too much risk of contamination to keep opening it up like that.
Click to expand...

When doing these incremental feedings how do you handle oxygen? Do you aerate just the addition before adding it? Aerate everything (which would stir up the trub?) Or do you add un-aerated wort slowly to prevent any disturbing of the trub and gently swirl to mix? (Or is the another way?)

I used a mixture of dextrose, sucanat and DME for my incremental additions---which I did 3 of. As for oxygen, I'd add my solution, then aerate in the carboy. When you're trying to reach high ABV, those yeasts can use all the help they can get.

Evan! said:
I used a mixture of dextrose, sucanat and DME for my incremental additions---which I did 3 of. As for oxygen, I'd add my solution, then aerate in the carboy. When you're trying to reach high ABV, those yeasts can use all the help they can get.
Click to expand...

Pretty much +1 for me on this too.
With my barleywine-ish brew and Evan!s Imperial Stout, a little oxidation (if any) is not going to adversly affect the beer. I think most big beers wouldn't be hurt by this, the only exception I can think of is if you were trying to do a really light big beer, like a tripel jacked up past 15%. But even then you might be fine.
OP

Thanks for the advice. I went ahead this morning with the feeding by boiling up 3 quarts of water, adding a can of John Bull Maris Otter (3.3lbs), chilling, putting it into the carboy and aerating.

Last Sunday I brewed an AG Belgian IPA. Mash-out left me with only one small sparge to complete the 5 gallon batch, so I got poor efficiency. To make up for it I sparged again to get a second running of 3 gallons, boiled it up on Monday morning and got a little over 2 gallons of 1.040 wort. I pitched it with a small amount of Trappist High Gravity yeast salvaged from the bottom of an old batch. It took off pretty fast, but not too aggressively and the krausen had mostly fallen by this morning. This 2nd running batch is what I am using for my incredmental feeding experiment. After two hours I have what&#8217;s in the picture below. I may need a blow-off for this thing. It&#8217;s almost as if that first fermentation was just a big starter.

I have a 1kg bag of Coopers Brew Enhancer 2 that&#8217;s been in my refrigerator for over six months. The contents are; dextrose, light malt and maltodexrin, but they don&#8217;t give the ratios. Do you think this stuff would work for a next incremental feeding? (I'd like to get rid of it.) 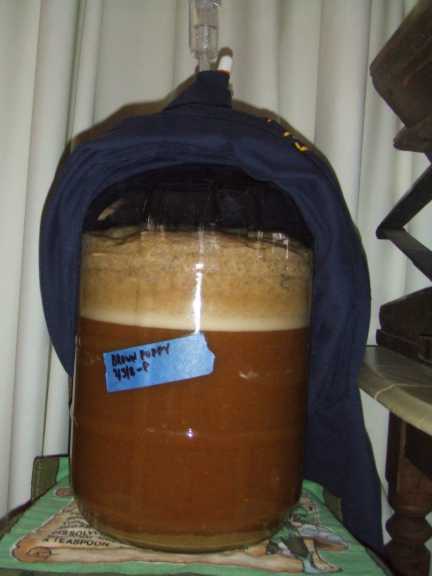 I did aerate after I added the addition, but not much. I would watch for blowoff. I started with 3 gal in the 6 gal better bottle and had a hugh krausen. It died down a touch before I added the addition, and then the day after I added, it went right out the airlock and all over the side. Had to iinstall a blowoff tube for three days befroe I could put the airlock back on. I had a mess!!! I racked this over to secondary Monday night, sample was very good and the SG got down to 1.012 (Started at 1.064 w/ 3 gal, SG was 1.02 when addition was made - SG up to 1.045 and then racked into secondary at 1.012).
OP

Originally Posted by Evan!
I used a mixture of dextrose, sucanat and DME for my incremental additions
Click to expand...

I got a reply from an email to Coopers on the content of the Brew Enhancer 2. It's 1.1 lbs of DME, .9 lbs of dextrose and .22 lbs of maltodextrin. Except for the maltodextrin, is it pretty close to what you used?

From Coopers:
... maltodextrin does not ferment thus improving the body, mouthfeel and head retention.

Is there any problem with using it for incremental feeding?

I don't see why it would effect anything. The yeast can't digest it, and I don't think that'll matter if its added in the beginning (Primary Ferm) or at any other stage prior to bottling or kegging.
You must log in or register to reply here.
Share:
Facebook Twitter Reddit Pinterest Tumblr WhatsApp Email Link

B
Adding water incrementally during the boil?