Getting a seal on cooler mash tun

Hey everyone, I'm new here and looking for some advice on how to make my cool-box mash-tun watertight. I've done 3 all-grain batches so far, so pretty much a novice! Hoping this is the right place for my first question...

As the title suggests, I've converted a cooler into a mash tun, and drilled a hole through it for a nipple/ball-valve. But I really struggle to get a proper seal on it. I've watched a bunch of similar conversions and it seems the answer tends to be - stuff loads of ptfe tape round it, which doesn't seem right to me!

Firstly, I guess its worth noting I'm from the UK, so all my fittings are BSP.

I started out with a BSP parallel-thread nipple, as I thought it would be easier to tighten it down to the specific wall-width of my cooler. As you probably know, parallel thread isn't watertight, so you have to stop water entering the thread in the first place. I tried to put a compression coupler on the end of the nipple inside the tun, with a fibre tap washer inside it. Fine - no water entering the thread. The next problem is getting it to seal against the wall of the cooler - I put an o-ring between the coupler and the wall of the tun, but the rim of the coupler isn't wide enough to retain the o-ring, and it deforms when tightening the nut on the outside - leaky tun.

So I moved to a barrel-nipple - these are tapered thread, so it doesn't matter if water enters the thread as the nut will always tighten down to form a seal. This was easier on the inside - just tighten a flanged backnut onto the nipple, put an o-ring next to it, easy. But on the outside, its another story. The barrel nipple has to be exactly the right length to get a seal, as far as I can tell. Too short, and you cannot tighten the outer nut enough to prevent back-flow leaks. Too long, and you cannot tighten it enough to pull the o-ring against the inside-wall of the tun.

Any ideas? Is loads of tape really the way forwards?

"Feeling much better now, thanks"

I still have my 10 gallon Rubbermaid mash tun, on which I used one of HBT member @Bobby_M's cooler bulkheads with a ball valve on the outside and it never leaked. The key is having a solid integrated flange on the inside to compress the flat silicone washer against the cooler liner so there's no way for fluid to get through. This is his barbed version - it came out well after the threaded version I used, but otherwise same idea. There's no threading for wort to follow. 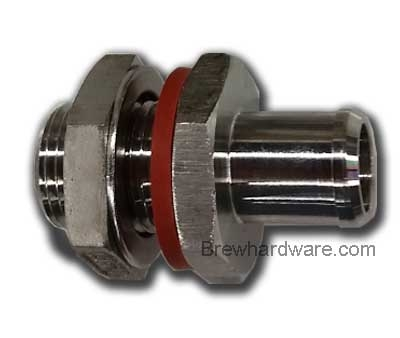 I shudder to think of the shipping cost from NJ, but if similar fittings are available in the UK I highly recommend checking them out.

Cheers - and welcome to HBT!

Hey - thanks for the idea, that looks exactly the type of thing I need. I was considering welding a nut and washer to the nipple, but if I can just buy the part that would be ideal. I'll get searching!
M

Watch Bobby's video. Be sure to use plenty of PTFE tape on the thread where the locknuts are engaged. Reinforce the wall of the cooler so it doesn't flex. I ended up using JB Water weld 2 WaterWeld Epoxy Putty part epoxy in mine (tough as nails). Dig out the insulation and pack the cavity with about 1/4" to 1/2" material radially. Water will never seep into the cooler walls and degrade it.

He has to use teflon tape because he's using a threaded nipple fitting where the liquid will travel along the threads and there's nothing to block it. I hate having to change teflon every brew. Has anyone tried a barrel nipple or bulkhead fitting?
You must log in or register to reply here.
Share:
Facebook Twitter Reddit Pinterest Tumblr WhatsApp Email Link