So most crazy posts start out with... I had this idea...

Well, I have this idea... I have been messing with GIMP more and more and want to make a picture/collage of all of our 'dream beers'.

What I want is beer ideas. I DO NOT want this to turn into an argument over which beer is better- but rather, a list of beers that we dream about. Essentially, if you opened someone's fridge, and saw one or more of these beers, you would know immediately that they are beer lovers. (Maybe include 'hard-to-get' beers?)


ps- I was going to cartoon-ize-ish the beers and collage them together with a cool looking background, I'll post a sample when I get to work on this.

I use secondaries. :p

I predict an argument along the lines of "why would you pick That Beer as your dream beer. it's terrible!", but.... I'll contribute:

Floris Passion is that beer to me... I got a beers of the world pub in my city and they have thousands of dif kinds, and I stumbled upon this, ....

I agree with these two. I also just had Bam Biere at Jolly Pumpkin. That might have to be on the list as well.

Wants:
Pliny the Elder
Pliny the Younger
The beer they made in Beerfest
Kate the Great 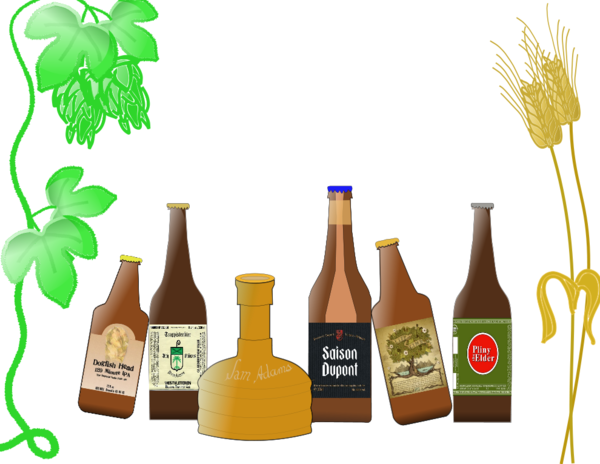 I like how it's coming together, BUT I didn't want to upload the *.png file- it was too big, so I converted it to a jpg- hence the quality loss (pixelish-ness).

I'm still learning a lot about inkscape- and it's soooo much fun. I just love that calligraphy tool. Anyways, here is what I will do...

ps- I just noticed that the bottle shine (the blur effect) on the Dupont bottle did not make it through- I'll update that later.

dude, do you have some rare label for saison dupont or something?

oh and I vote Rodenbach

And Paulaner Marzen, Which is one of my very favorite labels/oktoberfests

philrose said:
dude, do you have some rare label for saison dupont or something?
Click to expand...

Hmmm, not sure. I just google image searched "Saison Dupont" and found a label.

I'm not sure I will include all of these- but chimay is def. on my list. I might make another and add a lot more beers that people want.

But anyone have any tips for the background? Just keep it white?

My fav, is Delirium Noel.
OP

Any input on the background? I guess I'll try some things...

how about a simple wood grain, so they look like they're on a shelf or something

or an active chunky krausen?

you gotta admit that was a little funny.

get Utopias out of there, doesn't look right

I concur on both and would like to add..