I finally got a Ward Labs report for my water and I think it explains why my hops uptake seems to be low. There is nothing in my water!

So, I thought I'd post this here for anyone else on COS city water. Anyone here have any quick suggestions for adjusting my water to make better IPAs or Stouts?

This pic is small so I've copied it here. 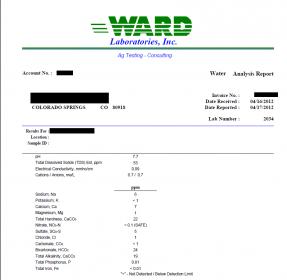 For IPAs and PAs, gypsum may be all you need. For stouts, the low alkalinity may drive your pH too low without some added alkalinity. Pickling lime is the surest way to add alkalinity, but it requires careful handling and measurement.

Boosting the calcium content will be helpful for most brewing uses and both of those minerals provide that. Have calcium chloride on hand for making more malt focused styles.

Somebody at Bristols told me awhile back that they use straight COS city water with gypsum added. Not sure how much. Ever since then, I've been adding a small amount to my mash. Has it improved my beers? Not sure, but it makes me feel better, I guess.
A

You might want to add something or you might want to add nothing. Which depends on your personal taste or the taste of whoever it is you are trying to please. The only way to find out is to experiment. It is very likely that an addition of some calcium chloride. both to get the calcium up some for yeast health and to get the chloride up for sweetness and body, would improve beers made with this water. Sulfate may improve the way you perceive hops.

This water is low enough in minerals that you could start with the Primer but be sure to try the beers with more or less calcium chloride and sulfate. Also be sure to use acid as necessary to keep mash pH in the proper range.

Thanks so much for posting this! I was just considering sending off a water sample myself to have tested.
OP

No problem! Are you going to any of the Homebrew Day events in town? I'll be up at Pike Peak Brewery with the Brew Brothers.
D

Thanks for posting this!

I feel like it also fluctuates from year to year. I have a few recipes that I've been brewing for 3 years. I feel like my process and ingredients are extremely consistent but that my beers change from year to year. It may be in my head but I don't think so...Especially with regard to hop utilization and flavor.

Here is an updated water report for Colorado Springs, I just received them today (9/18/2012).
Cheers

"<" - Not Detected / Below Detection Limit 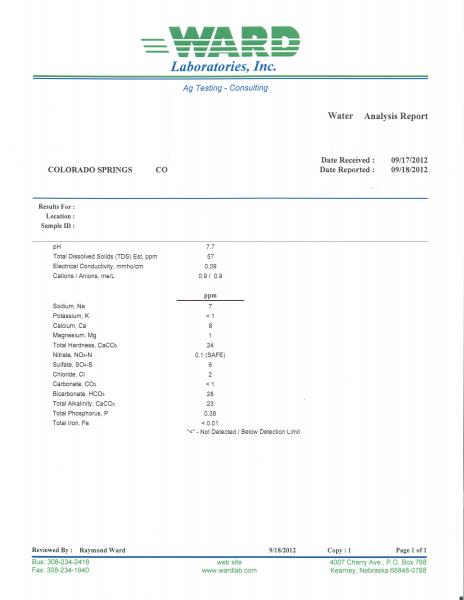 One thing to note about COS water is that there are 5 different treatment plants with different sources for water. To further confuse the matter, they may also bring water from one plant to another area mixing water from the two sources.
A

If this results in wildly fluctuating water parameters then that can be a problem to which the solution is either self analysis of the water each time brewing is contemplated. While this is not difficult to do it adds more work to the brew day and the test kits do cost some money. The other solution is to remove the variability by removing the minerals and replacing them with your own i.e. by using RO water. While there is still the nuisance of having to add the minerals at least they are the same mineral each time (per style). OTOH if all the sources are similar to the 2 reports that have been posted here the water is pretty mineral free and the variations would, therefore, be small.

I like the fact that between the two reports from two different members were fairly close in all the values measured by the lab. if there was wild variation then it would only add more confusion to Colorado Springs water supply.
B

I live COS and while it is true that thier are several sources for water that is the case in most places. If you ae on county water or city water or Cherokee water is the main question. I am on city water and have recieved the report a few times and it remains ver consistant. If you are on county water not sure what that is like but my buddy has county water and his Beer turns out fine. Even did the same recipe and here was not major diffrence in flavor.
B

Those of you in COS are you members with Brew Brothers, I was thinking of going to a mtg but they have conficted with other meetings twon months in a row now.
D

ajdelange said:
If this results in wildly fluctuating water parameters then that can be a problem to which the solution is either self analysis of the water each time brewing is contemplated. While this is not difficult to do it adds more work to the brew day and the test kits do cost some money. The other solution is to remove the variability by removing the minerals and replacing them with your own i.e. by using RO water. While there is still the nuisance of having to add the minerals at least they are the same mineral each time (per style). OTOH if all the sources are similar to the 2 reports that have been posted here the water is pretty mineral free and the variations would, therefore, be small.
Click to expand...

You are absolutely correct. Having looked at the water reports from all of the different treatment facilities, there does not to seem to be drastic fluctuations among the different sites.

However, I am a total OCD control freak and started using RO six months ago.
A

catlee said:
the water ionizer is the best one on the market, filters the contaminants out and makes the best tasting anything-you-make with it, coffee, tea, foods, and of course beer. but only for the serious water connoisseur; amateurs won't spend on it. the water is of consistent quality - that is why it has a patent.
Click to expand...

I wrote yesterday in another thread that chloride:sulfate ratio was one of the biggest hoaxes in 21st century brewing. I didn't think anyone would have the temerity to mention water ionizers in a topic entitled Brew Science. Surely the water ionizer is the biggest hoax of all in the 21st century and probably for all time when it comes to water treatment. The magnetic softeners are perhaps the second.

Of the water ionizers the Kangen is definitely the best: for the marketer. It is sold by a pyramid structure which means that it sells for a much higher price than any of the others and also neatly protects the guys at the top of the pyramid from action by the FDA. They are the ones that make the false claims. The salesmen just repeat what the factory says. As the guys doing the lying are in Japan they are protected from action by US authorities. The lowest tier people (like catlee) are as taken in by the BS as the unsuspecting public and as they aren't the ones making the claims the government can't go after them.

There are lots of places on the net where the individual claims are debunked in detail. I'll only mention a couple of things here.

All water is ionized. At a given pH the concentration of hydrogen ions is 10^(-pH) and of hydroxyl ions is 10^(pKw - pH) where pKw is 14 at 25 °C. As we know from this forum water can contain lots of other ions. If you want to 'ionize' your water by adding the ions of salts, add the salts.

The machine works by electrolyzing the water. If the water is low in dissolved ions it will not conduct so they have you add sodium chloride. The sodium ions are reduced to sodium at the cathode which reacts with water to produce hydrogen gas and sodium hydroxide. This is the 'alkaline water' the machine produces. You can get the same thing by adding lye to water. At the anode chloride ion is oxidized to chlorine gas which reacts with the water to produce hydrochloric acid and hypochorous acid. This is the 'acid water'. By blending in various proportions you get the '5 types of water' the machine produces. In an intermediate blend the lye neutralizes the hydrochloric acid and the hypochlorous acid giving NaCl and hypochlorite ion. This, by the way, is how electronic pool chlorinators work. Rather than spending $4000 on one of these machines you can achieve the same result by adding a couple of drops of bleach to your water. $4000 or a bottle of bleach? Which is the more economical purchase?

One of the more deceptive aspects of the marketing involves ORP. They have a video in which they stick an ORP probe into brand X water and then into their alkaline water. The meter reading plumments. Of course it plummets, not because of the ORP but because of pH. ORP meters respond to pH and ORP. To calculate ORP one must measure the pH and subtract its effect from the reading. You would hardly expect catlee or the public to understand that but as HBD Brewing Science readers we do (well we don't discuss REDOX very much here it is true as most of the chemistry of water is acid/base).

Don't be taken in by this. Certainly there is no benefit to brewing. We don't put lye or bleach in our beer!!!

The little red triangle is for reporting offensive/spam posts. I just used it. Even if the mods decide to let it stand they should remove the SEO level increasing link.

I first heard about these claims about alkaline water being good for you when I started doing research because of my high pH water. The most relevant thing I saw was something along the lines of "Do these people really think this high alkalinity is going to get into their system after if first hits the acid in their stomachs?"

But then again, I'm not a "serious water connoisseur".

catlee said:
but only for the serious water connoisseur; amateurs won't spend on it. the water is of consistent quality - that is why it has a patent.
Click to expand...

Water report from a nearby spring