Brewing a Candy Sour....post your process

There's not a lot of information out there regarding brewing with Candy.

My local sour joint brews the craziest items. I'm a big fan of brewing fruited sours, but I'd like to try my hand into a candy sour. What really got me thinking about this was the two candy sours I had recently. One was a Starburst Sour (red/pink in color) and it tasted like...starburst...and it was impressive. The other one they did that I thought was amazing was a Red Vines sour. It actually tasted like Red Vines....

Some thoughts I have:

1) Use hard candy when possible. The ingredients are more simple, and it would melt easy. Starburst comes in hard candy.

2) How much candy to use. Seems like you want to be in the "poundage" here. At least one pound for a 5G batch?

3) Seems to be if I treated it like fruit, you should be able to get most flavor tossing them in after peak of primary fermentation.

4) Maybe impacting the color would be to use for example 1lb of candy during the last 15 minutes of boil, and 1lb in the primary....

How they did the red-vines is beyond me. Maybe they dumped 5lbs of red vines into a muslin sock into late primary.
OP
F

Let my start by a guestimate.

StarBurst FaveREDs instead of classic? Vanilla bean to meld flavors and add perceived sweetness? Make the wort unfermentable as possible to counter all the adjunct sugar?

I would personally add some lactose because everyone who drinks my beers can consume it, if you can add it, it will give some residual sweetness to enhance those candy flavours

Maltodextrine isn't fermentable for sacch too, so it might be a good substitute in case someone allergic to lactose drinks your beer, but if you add brett by any chance, it will ferment both
OP
F

Do all candy additions in secondarys of 2 gallons each.

This guy's picture got me super excited. Take a look at the picture of the green/blue gushers beer.

I made 6 gallons of a base sour. It's fermenting/souring right now.

I picked up 2 lbs of watermelon sour-patch gummies. Probably won't use them all.

I'm planning to head to the store and pick up 2 more varietys as well.

My plan is to rack the beer into three seperate vessels for three different varieties.

I was thinking about pasterizing the candies before racking, but I'm not sure if it's really necessary. Thoughts?

fendersrule said:
I was thinking about pasterizing the candies before racking, but I'm not sure if it's really necessary. Thoughts?
Click to expand...

I personally wouldn't bother with pasteurization in this case. I really doubt there's any relevant yeast or bacteria on it.

I once made a wine from candy corn and the flavor didn't come through at all. You might consider using flavorings rather than the actual candy. Either way, good luck to you!
OP
F

My hope is that 1.5lbs of candy per 2G would probably be sufficient. What do you think?

Curious if Airheads would disenagrate. I'm thinking to atleast cut them up by scissors into smaller strips. This is Blue-raspberry. Hoping that it would turn the beer to blue-green. Chances of that happening?

Curious if the sour patch watermelon would disenagrate, what do you think?

I suppose I could pour in some blue-berry juice with the airheads, and pour some watermelon juice in with the sour patch. The problem is that I'm going to need larger secondaries. As long as you are adding more fermentables, is there a worry about headspace in a secondary? I know head-space is a no-no if not adding fermentables. Suppose there is no reason in either case to add yeast nutrient?

Thanks for any additional help!
OP
F

Thinking I'll let this sit for a month. 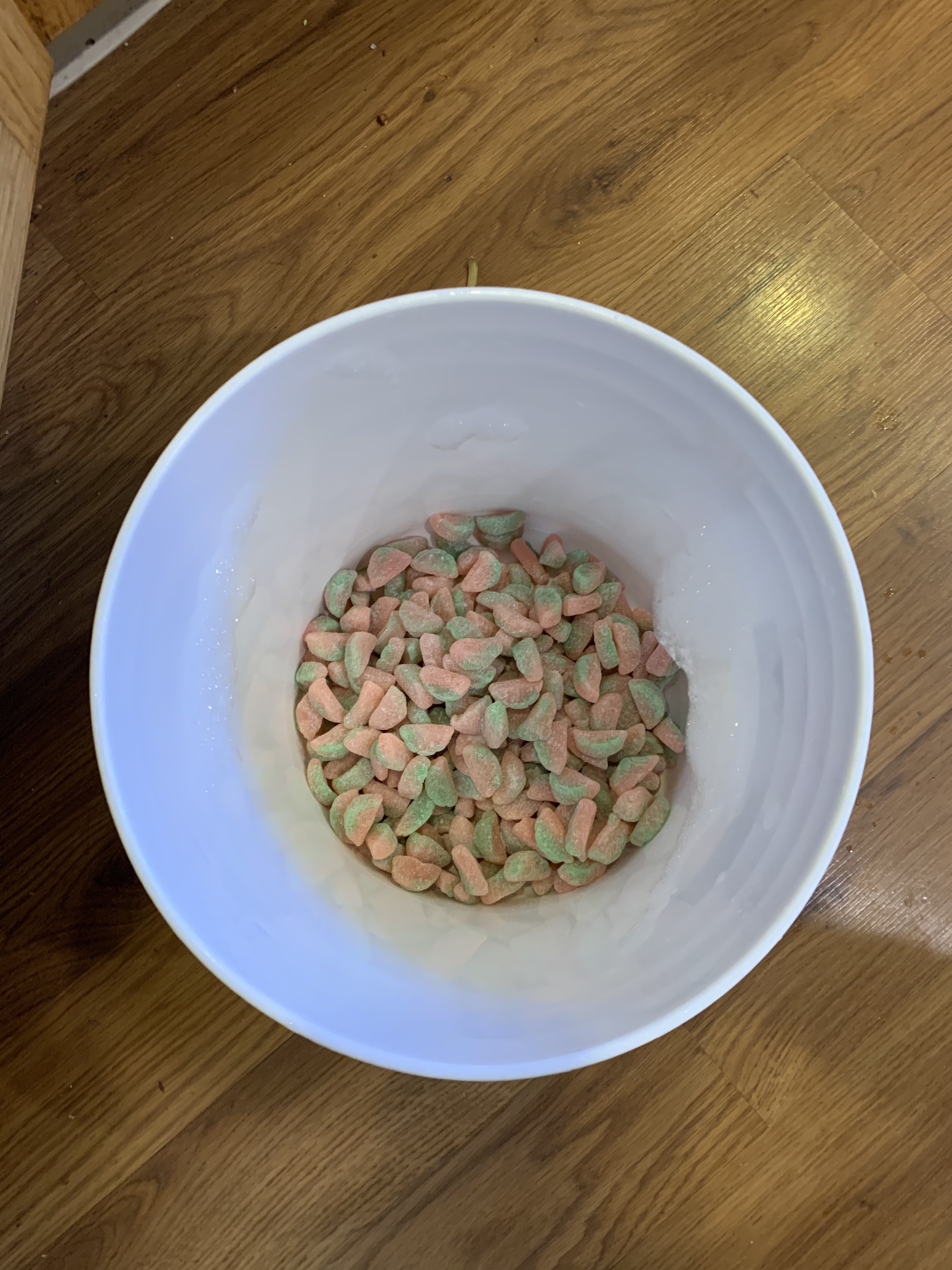 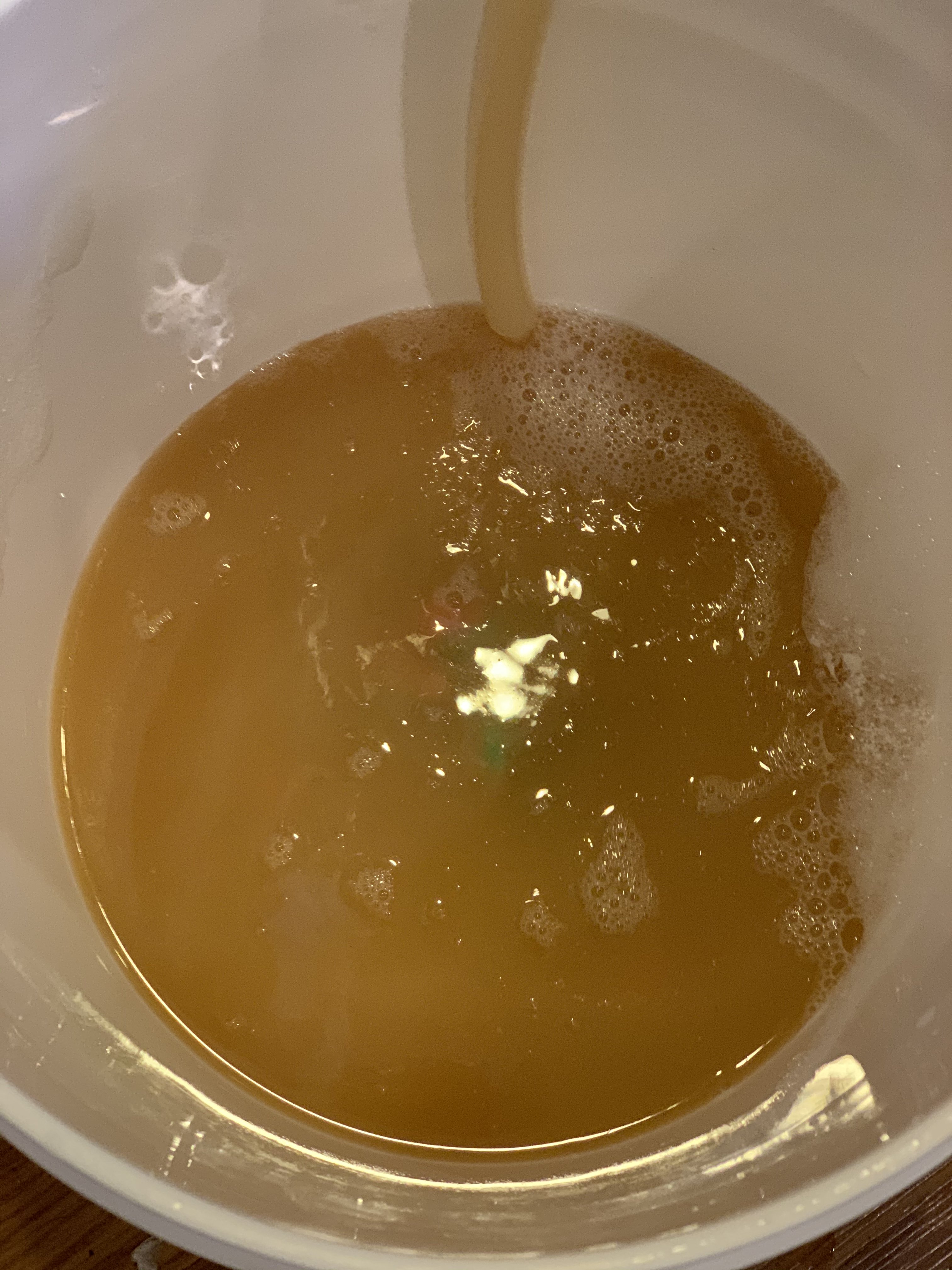 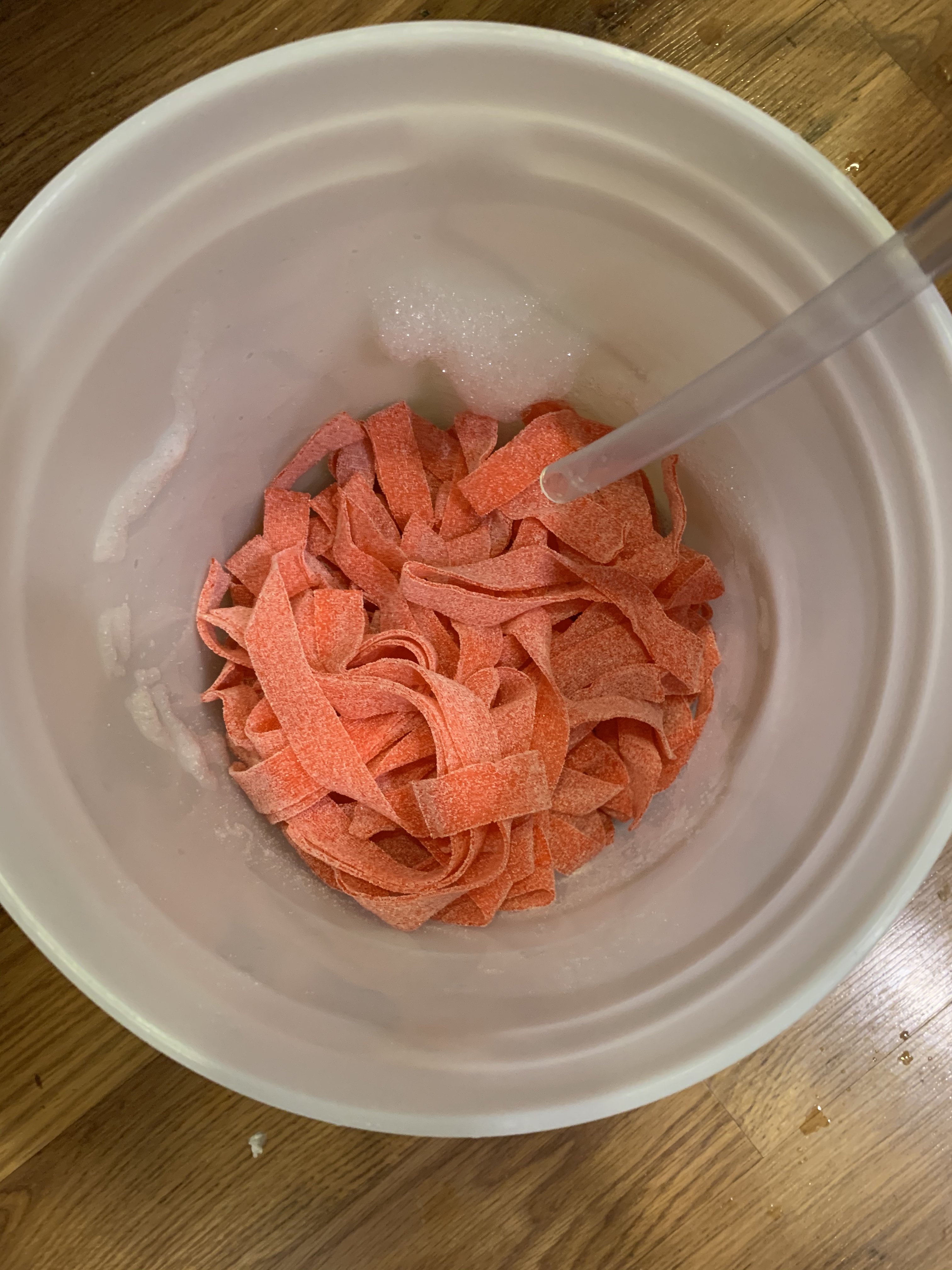 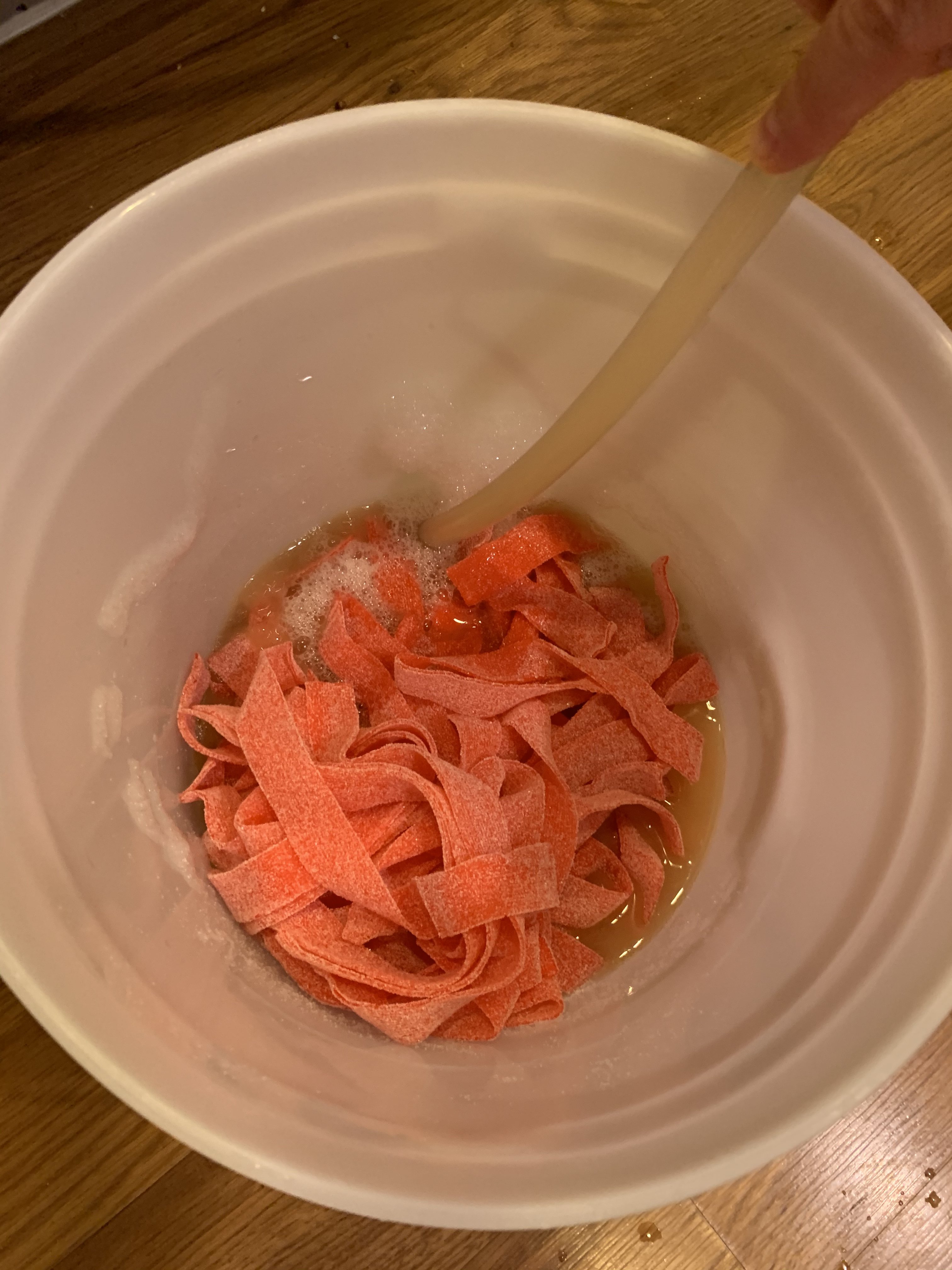 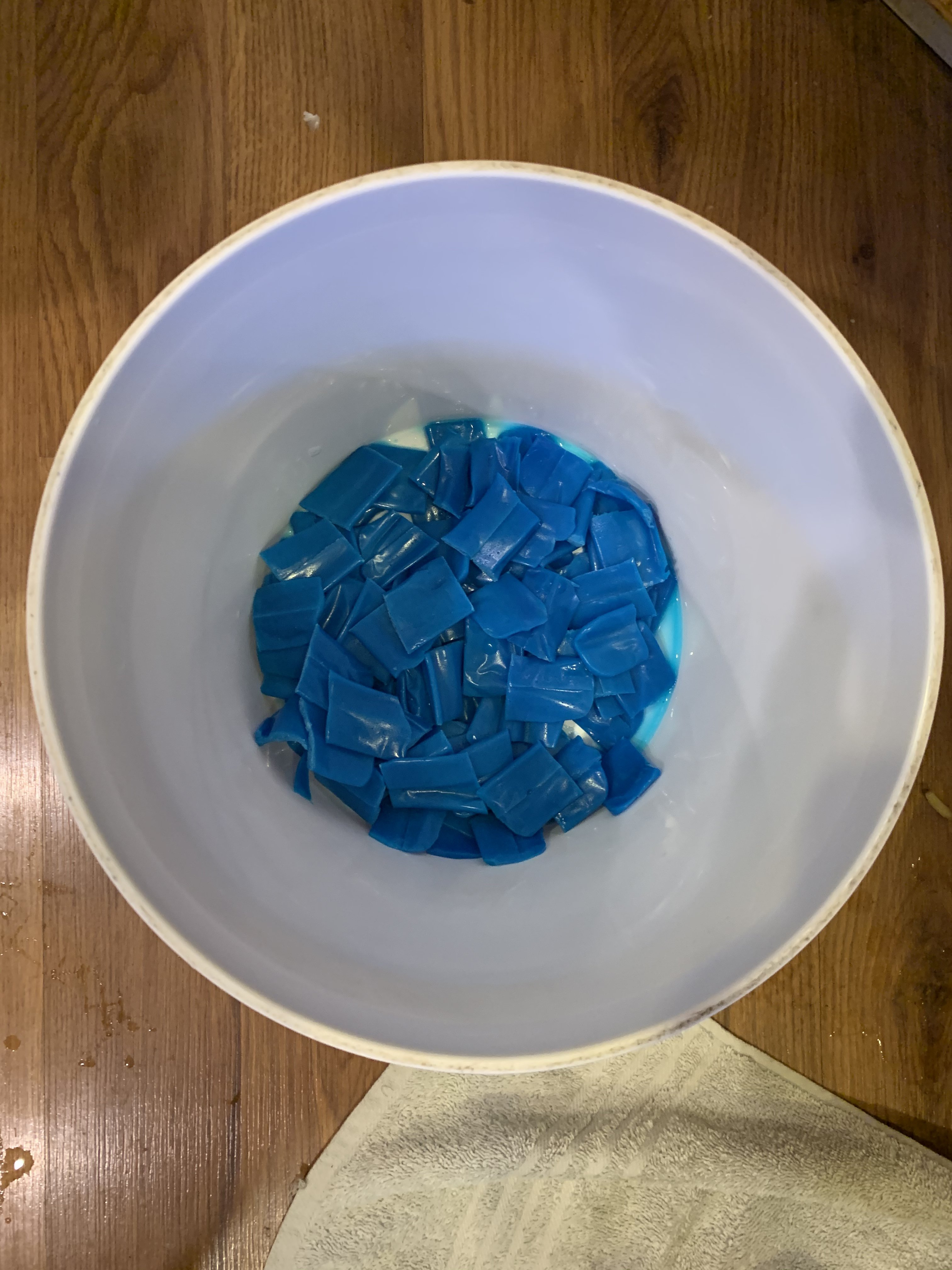 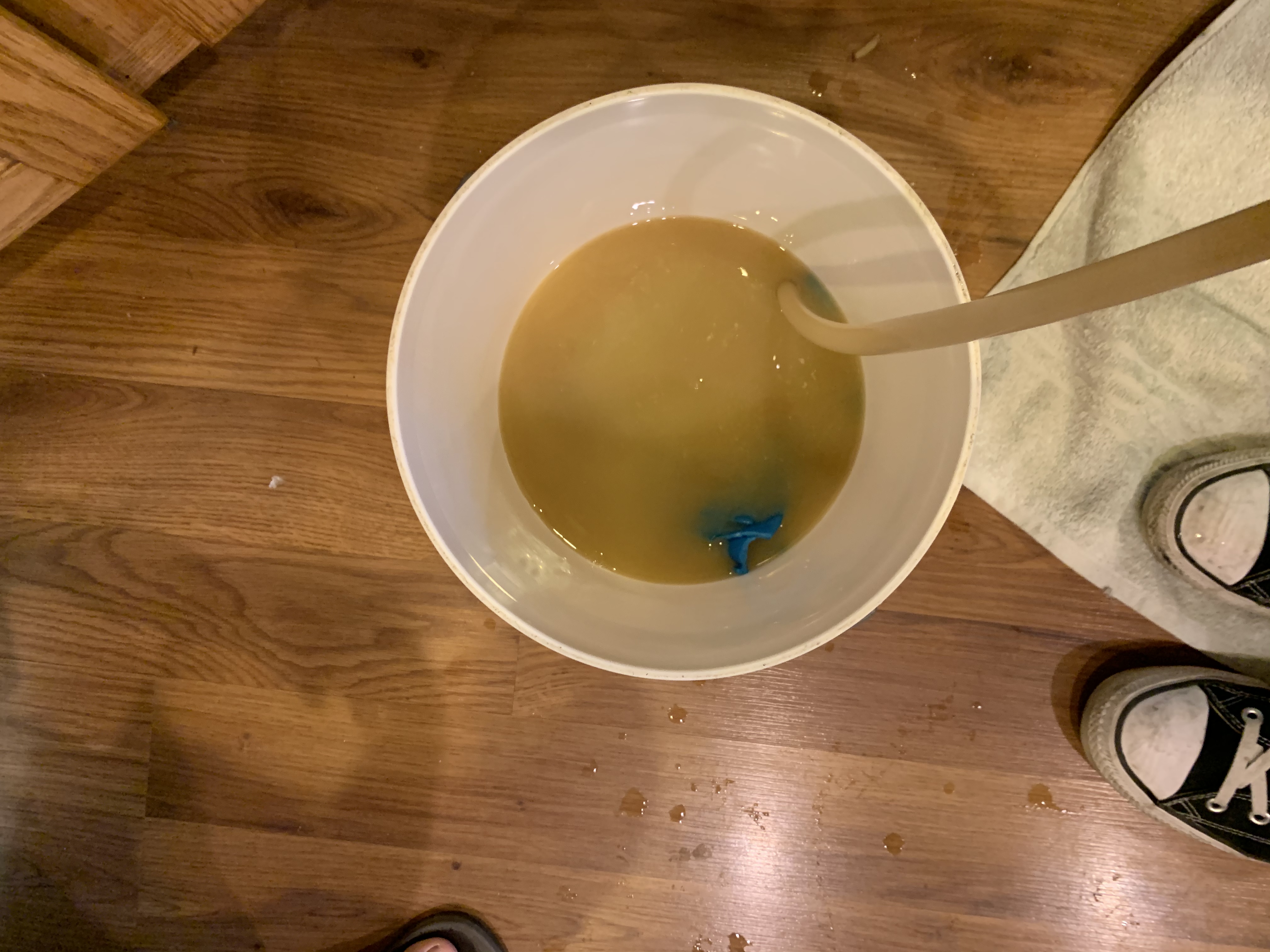 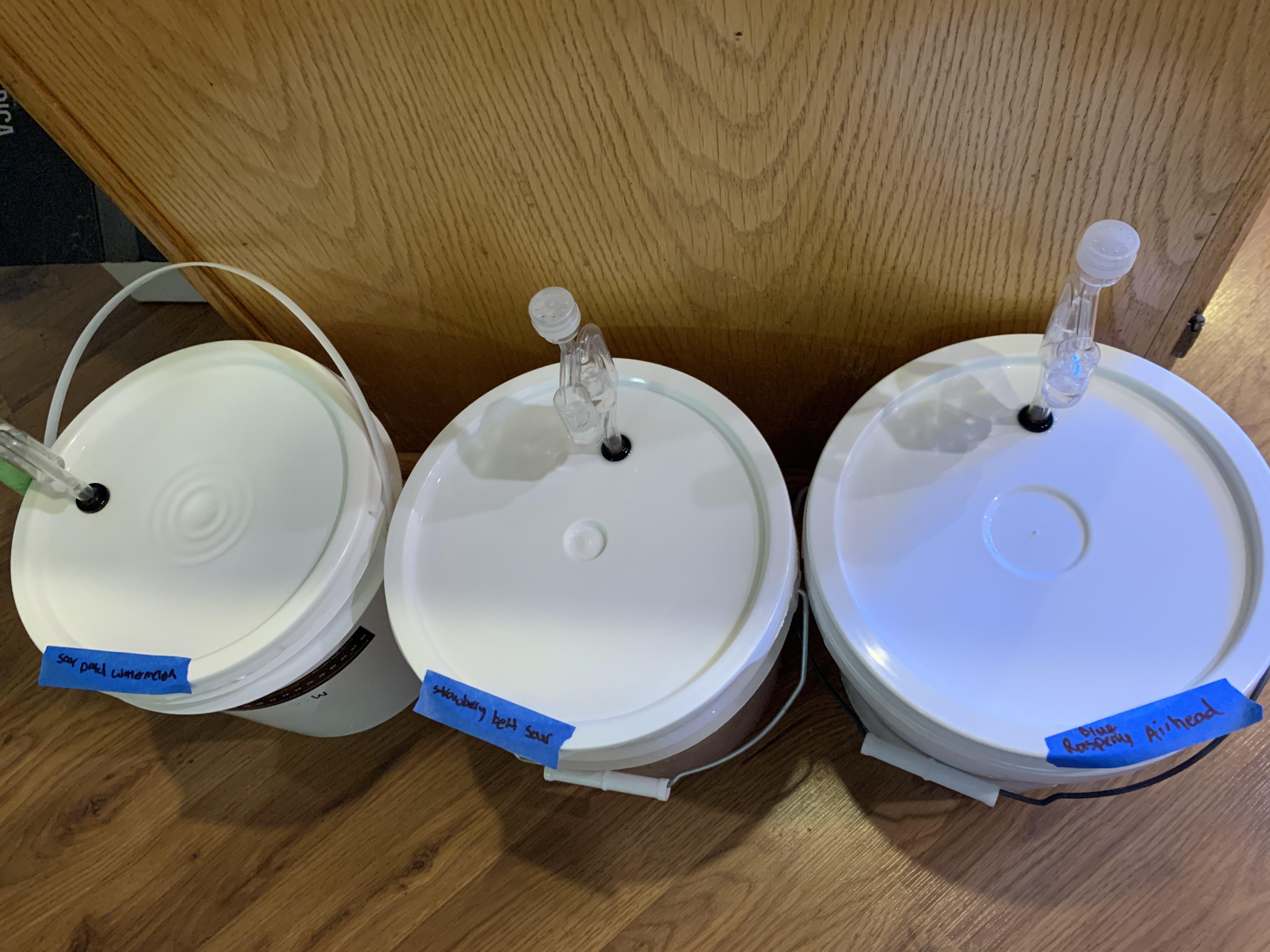 I chatted with the head brewer that does this stuff locally a lot. Learned some things that I had thought about doing but didn't choose to do.

Basically, I did it correct. There are a couple optional things I could have done, but what you see above is how it's basically done on the professional level.

Curious how the fermentation(s) are going? I see these candy adjunct beers all over now, seems that this fad has saturated the American craft scene and especially in the midwest. We might need a special Adjuct sub-forum for novel ingredients if it keeps up. I've put some strange stuff in my beers from the bulk section but it's been limited to botanicals and cereals.
OP
F

Has been 1 week in secondary. Going to bottle it next week.

I've removed the airlocks in order to take a whiff. Each one definitely smells like the candy that I put inside.

Of the secondary that is semi transparent, I can still see the strawberry sour strips, but they look pretty thin and are all resting on the bottom. In other words, these have not broken down entirely after 7 days.

Next time it is best to melt any candy down and to add it in syrup form. I had thought about doing that many times, but I decided to just go whole with it.

The airheads fermentation restarted pretty quickly. The others (strawberry sour strips and sour patch watermelon) did not create any new airlock activity. HOWEVER, I've pretty certain it did restart fermentation and that these little 2 gallon buckets probably have an air leak somewhere.

I'll definitely post an update when I have it!
OP
F

Candy sour should be as relevant as any other flavor you want to add. Whether it's fruit, cereal, spice, or whatever. Candy is roughly about the same price as frozen fruit, so why shouldn't it be relevant?

You have a taste that you like. That makes you recollect and think about something, perhaps when you were a kid. It's all the same. Nothing wrong with adding ANY taste to a sour, or beer for that matter.

Stay tuned. I can tell simply by the smell of it that it will be a damn good sour!

Pics in about 6 more days.

goodolarchie said:
Curious how the fermentation(s) are going? I see these candy adjunct beers all over now, seems that this fad has saturated the American craft scene and especially in the midwest. We might need a special Adjuct sub-forum for novel ingredients if it keeps up. I've put some strange stuff in my beers from the bulk section but it's been limited to botanicals and cereals.
Click to expand...