Flying on a wing and a prayer (and a lot of marketing experience), home brewer turned professional, Wade Curtis, has revived the brewing industry in Ipswich Australia after almost a century of dormancy.
Wade Curtis has a love of brewing tht started in 2001 when he tried a ‘brew on the premises’ company local to his area. He liked the idea of a ‘hands on’ approach but found the recipes on offer were all pretty much the same. He branched out, taking the usual route from Kit’n’Kilo, to Extract and finally onto All Grain brewing before his hobby expanded into an unofficial Oktoberfest in his Runcorn street every year. An increasing number of friends and hangers-on at these events caused Wade to take stock of the situation and quickly realize he had the makings of a business venture on his hands if he could stop giving the stuff away free of charge!
By this time Wade had a decent recipe base, having experimented in ales, lagers, stouts, saisons, and a range of Belgian beers. It was time to take the plunge. 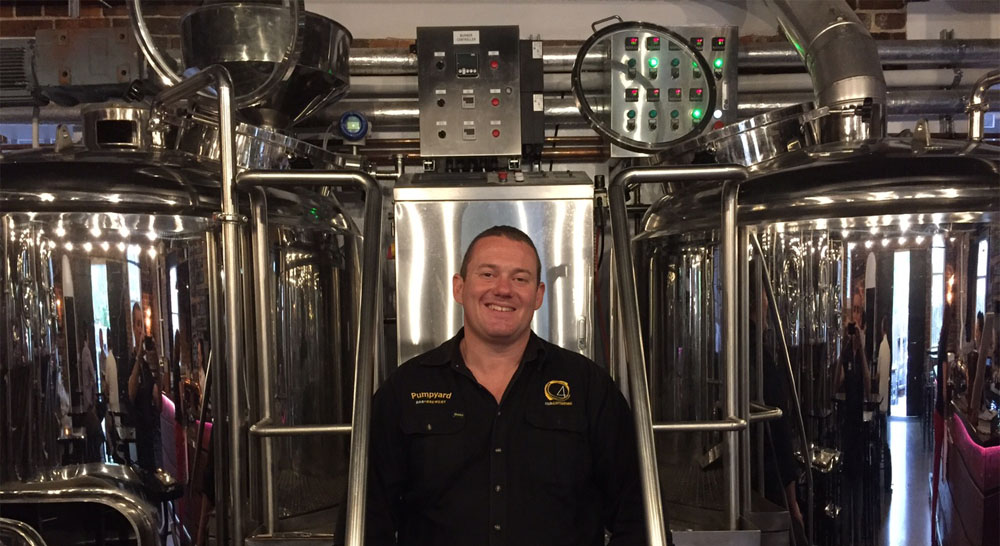 Wade standing in front of his Brewing Equipment

His brewing company Four Hearts officially hit the craft beer scene with a pale ale release at the Grand Central Hotel in Brisbane in December 2010. The following May a local release was held at the Yamanto Tavern where the pale ale and a wheat beer were showcased. By this stage the beers were being produced at Bacchus Brewing in Capalaba before being distributed locally in Ipswich.
The next logical step was to get his own premises, which brought him to 88 Limestone Street where the Heritage listed Technical College (c.1901) was just waiting for a new use. The site of the building itself has a rich history in Ipswich dating back to before the College was even built. It was originally a water supply site for Ipswich township (hence the name of the current venture: The Pumpyard). Wade set to work installing a 12hL brewery set-up including four stainless steel fermenters, all of which are in plain view of the servery and seating areas and poured his first beer from the new establishment on the 11th of March 2015.
Ever the showman, Wade can usually be found racing around the venue, talking to customers, getting feedback and – in his words – “converting non-beer drinkers.” With a range of half-a-dozen regular beers on tap this is easy to do. Whether you want a hearty stout or a low octane refresher for the designated driver, you can find what you want. Guest taps are frequent, and ciders are available as well as a large range of bottled beers.
Favorable reviews and industry awards have also been showing up thick and fast, with the Coalminer’s Stout, Let Loose Amber Ale and the Ipswich Challenger (among others) getting gongs at the CBIA and AIBA awards.

One of the reasons behind Wade’s success is his willingness to share his secrets. He openly discusses his successes, rare failures and current projects with anyone interested in listening. He is a regular speaker at Amateur Brewing conferences and enthusiastically supports the local Ipswich home brewing community. His advice to new (and old) brewers is simple: good water quality and good temperature control. Sounds overly simplified, but all you need to do is wander into The Pumpyard any day it’s open (if you can get in) and you’ll see that following these two simple rules has done well for him.