I just finished a Heiny mini keg and tried to see if it can be used for re kegging. After driving the center draft spout into the keg I then cut it open.

I don't think they can be used.

1) the center draft spout is slightly larger inside than outside, this could be worked around since it is soft aluminum.

2) the carbonator is glued to the bottom and is a small aerosol can 2" X 6" and definitely cannot be removed without cutting open the keg. this is the biggest problem because I don't think you could clean the inside with the carbonator inside.

I've seen people make manifolds for the normal 5L kegs... So that might be an option
E

Is there any way to make a keg similiar to heiny keg but make it reusable?

Emanresu said:
Is there any way to make a keg similiar to heiny keg but make it reusable?
Click to expand...

you can buy them if you can find them. they were the rage for sometime, at 5 liters. now they are impossible ot find in the US.

I'm about to put my mini-keg CO2 tap up for sale since I no longer use the system.
E

you can buy them if you can find them. they were the rage for sometime, at 5 liters. now they are impossible ot find in the US.

I'm about to put my mini-keg CO2 tap up for sale since I no longer use the system.
Click to expand...

you're right, all i can find are the "tap-a-draft" systems. We have party pigs, but those mini kegs look nice and are easy to store. What does your mini keg look like?
5

malkore said:
you can buy them if you can find them. they were the rage for sometime, at 5 liters. now they are impossible ot find in the US.
Click to expand...

Is that the same one's they sell Kostritzer in?
If so, they are readily available at my local beer dist. I don't see why any distributer couldn't order them for you. Last I checked, they were only like $17. Not bad for Kostritzer, man that is good stuff...

That little tap on top is exactly what I have. The box it came in is mostly in German, with some very bad Engrish translations.

They appear to have some that would work for sale here: http://www.weekendbrewer.com/minikegs.htm

note it has both a bottom dispenser, and a hole in the top for filling, plugging with a bung, and using the CO2 powered tap.

I don't have any mini-kegs left...they all eventually rusted on the inside and outside.
OP
M

Listermann's has the mini kegs band new for sale just bought 6, they said they had plenty

Here are more I found.

I read folks have issues with carbonation with them. anyone know?
T

My first post just to show you some pictures that I took when I opened the HEINEKEN KEG 5 liter ( bought in Brazilian local market ) . I did not open to use it later.. I was just trying to find out what was inside.. so, I saw the whole can apart.

i've also cut open a used heineken beertender keg out of curiousity.. i did it in a much cleaner way, i drilled a hole in the top and used a bosch nibbling tool to cut the top off of the keg..

the kegs are made of steel, so aren't worth much... the inner white co2 unit is very interesting in that the cap contains a piston that acts as a pressure regulator against the valve on the co2 can, allowing enough pressure to dispense the beer while not allowing enough pressure to explode the keg. i haven't cut open the co2 unit, but it does contain some sort of filler material... almost like it's filled with gravel or bb's or something similar.


i consider the beertender kegs to be an economic and environmental disaster... the cost for 5 liters of mediocre beer is bad enough, the fact that very little of the container is recycleable by any practical means says that this product is a major flop.
T

Actually you CAN DO IT thanks to this nut:
http://www.thebrewingnetwork.com/forum/viewtopic.php?f=&t=21461
and it does not matter if the CO2 cannister is still in, you can use an outside one.
L

You can use it ad a headrest 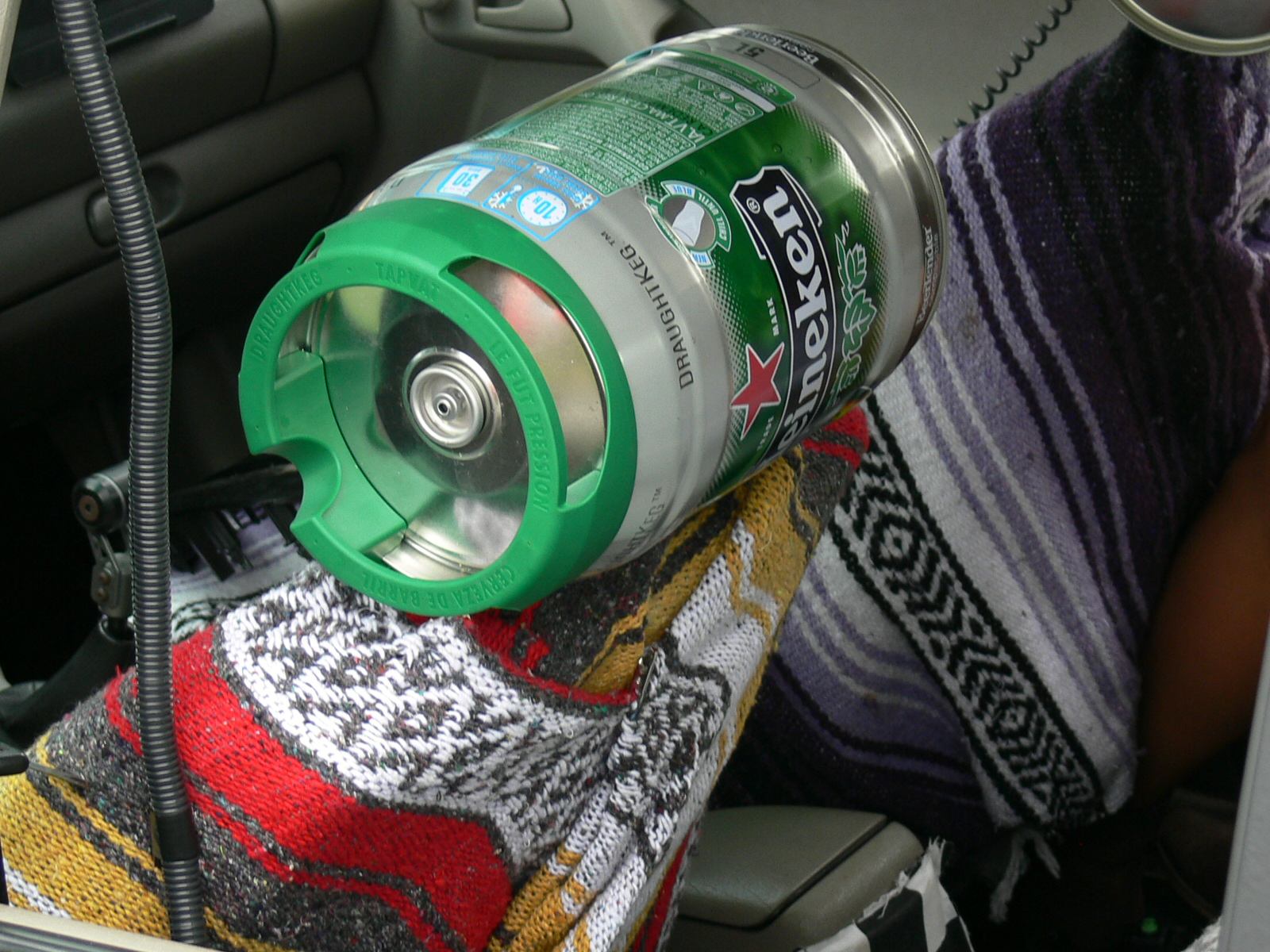