I find that a good insult on top of the insulation on the fermentor seems to keep the temperatures more in line. It has to earn my respect and a few insults keep it in its place.

I would NEVER insult the yeast, though!

Guys, I could use some help here. I've been working on my Stout 7gal heated/cooled build (similar to documented in this thread) for going on 6 months now and I just can't for the life of me figure out why I can't get ANY performance out of this system. So here's my details:

I purchased the 7.3gal Stout conical, and at the same time picked up their peltier kit which included the aluminum blocks as well as the heat-sink fans. I picked up TWO of them, hoping to get some great lagering performance (easily keep my beer in the low 50's range). So that means I'd have 4 peltiers on a 7.3 gal system. I'm using the same peltiers that many on this thread have used.

At first I thought the problem was my power supply being under powered. So I went out and bought a new 600w power supply from a local computer supply warehouse. I've experimented with the fans pointed both in and pointed out. I then thought perhaps the problem was I wasn't using enough thermal paste, so I went out and bought a 40g tub and smeared that all over both sides of the peltiers as well as completely all over between the aluminum blocks and the side of the fermenter. I've insulated the fermenter. I've tested the peltiers when disconnected from the aluminum blocks and they are absolutely cooling down into the 30f range. I measured the temp on the aluminum blocks while not attached to the conical and with the peltiers attached, and I measured at least a 15-20 degree temp change on the aluminum block in a 30 minute period.

But when I attach the damn things to the conical I can't get them do bring the temp down any more than 10 degrees past ambient. Ambient has been around 78f in my basement. So WTF is going on? I'm getting really really discouraged here. I had initially saved up for the Morebeer heated/cooled conical, but when I saw this thread and realized I could build my own for MUCH less I pulled the trigger on it. But man it is disappointing that I can't make it work!

I'll take pictures of what ever you guys need me to. If anyone can offer help (a few on this thread have already tried) I'd really appreciate it. Let me know if I'm leaving out any details needed to help.

I need to test this now that I have insulated it. I'll run downstairs and set the thing for 50 and see if it ever gets there. Basement is now 68 degrees. Maybe it won't work as well as it appears it is going to. Never tried to lager, never tried to cold crash. Have only tested it at 64 degrees when ambient was around 70-72, which is not that tough of a test. But it held it perfectly at 64.

As for the fact that one of my pelters wasn't working, I only found that out because I have an amp meter on my 12v power supply (set to 13.8 v) and it was about half what it should have been. I don't know for a fact if this was the case during my fermentation-- it is conceivable that both Peltiers were working fine at the time.

Another thing I did was insulate the aluminum block, as well... I covered the whole thing with closed cell foams it was not in contact with air at any location. Not sure if this helps much or not.

I'll fill the fermentor with water and see how she does tomorrow afternoon.

Started the test. The temp doesn't drop very quickly. Plugged in my brewbit to monitor the temp of ambient and there water inside and set the target temp for 40 degrees. I work tonight and will check the temp in the morning.

For those that are using thermal paste between your conicals and the heat sink, have you guys looked at using a thermal pad? http://solutions.3m.com/wps/portal/...cs/Products/Product_Catalog/~?N=7234402&rt=c3

Also, does anyone have the PDF that the OP posted back in 2013? The link is dead to that PDF. Thanks!

Here is what I believe are the original plans. These are found on the Stout Tanks website. 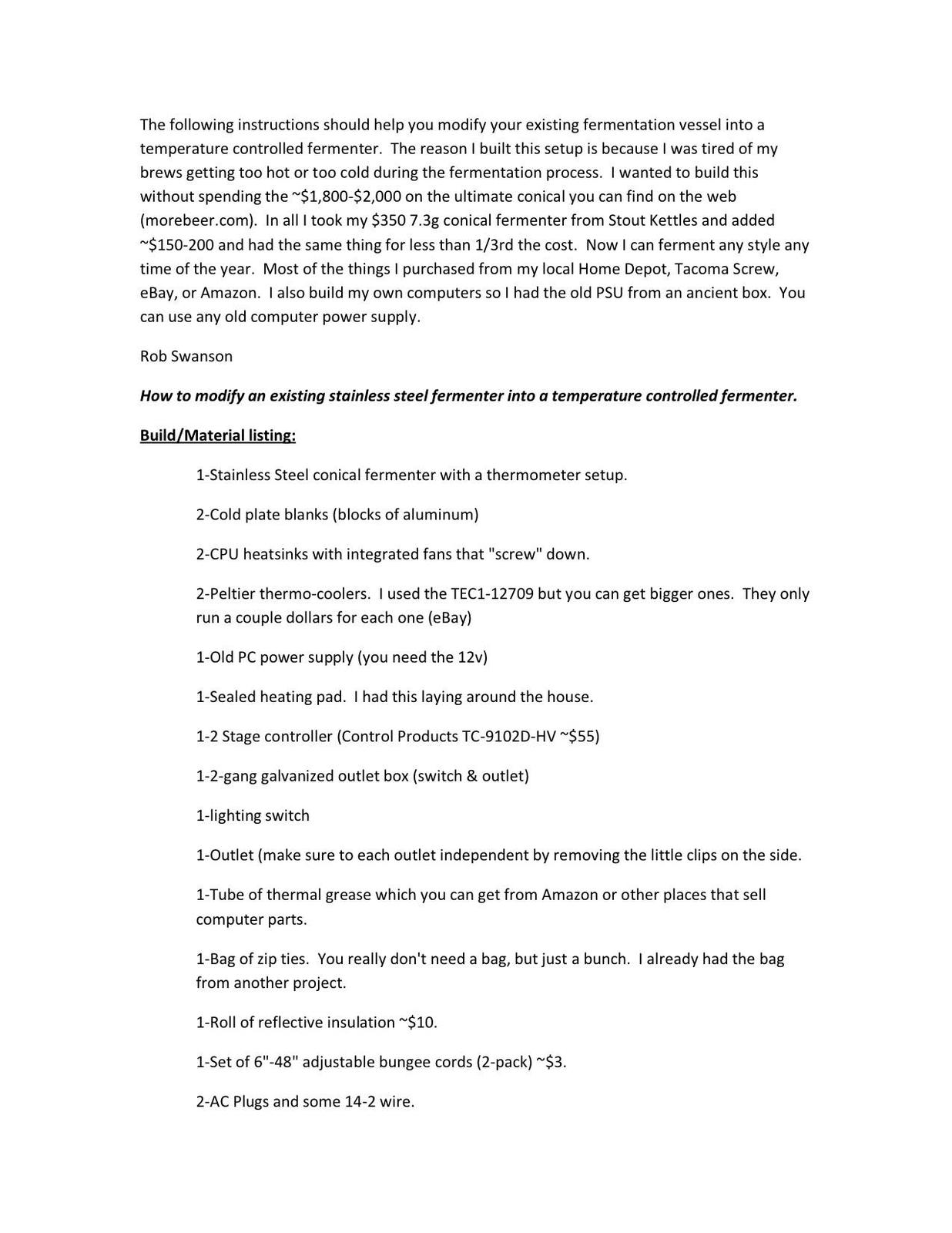 I saw something mentioned earlier in the thread about ice forming on the inside of the empty fermenter. Won't that, well, freeze the wort and be generally bad for the yeast?

Came home from a night shift to find that the power had gone out to the conical. I plugged it back in this morning but there was about a 5 hour delay in the test, during whig time the temp rose a bit. Top of the graph shows the temp of the 6 gallons in the fermentor and the bottom graph shows ambient temperature over the night and morning. The long straight line is where no data was being sent as the power strip went out.

Looks like it is going to level out at around 50-51 degrees after about 24 hours. This is around 18-19 degrees below ambient. I may let it sit until I go to bed tonight and see if it goes any lower, but my basement never gets above 75ish, and I ferment always around 64. In other words, it works well enough for me.

As for ice forming... I do not think it is a problem for the yeast. it was a TINY bit of ice, at first I thought it was just condensation, but when I slid my finger over it, there was a thin veneer that slid to the side. And that was with no liquid in the fermentor. If there is liquid, there will be enough thermal mass that no ice should form, and the cold denser liquid should fall, starting some thermal circulation within the fermentor. This should prevent ice from ever forming when liquid is inside. But i can check after I unplug everything.

So, with a single PID, I am just at the border of being able to lager, BUT, when the beer is actively fermenting, I do not know if it will be able to deal with the extra heat of fermentation.

I tried to calculate the cooling power of the device based on the weight of the water and rate of chilling, and initially it appeared to be pulling almost exactly 40 watts of cooling power.

Well I think ONE issue might be that I'm not getting good enough contact between the aluminum blocks and the conical. I pulled them off tonight and here's what is saw:

Here is a picture of the bottom of my heat sink next to the Peltier. Notice the Peltier outsizes the heat sink. Is this normal in anyone else's setup? Or does your heat sink completely over the Peltier?

My setup uses the Stout Tank kit. I'm using the same 40mm x 40mm Peltier as many other are in this thread. I'm wondering if the reason I'm getting such poor performance has to do with the size of the heat sink compared to the Peltier.

Can you measure both the heatsink contact base and the peltier size? I believe mine are exactly the same size, and I think that if the peltier is bigger than the heatsink base it isn't going to work as well.

Not the best pictures, and I couldn't find a metric ruler but this gets you a good idea.

40mm comes out to just over 1.5 inches. That's what my Peltier measures at. The heat sink you can clearly see is not as big.

You have far to much heatsink compound on there. Between the hot surface and the peltier it should be a thin layer. The compound is only to fill voids/gaps not actually be a thick blob on the surfaces. Also, the surface of the heatsink should be the same size or a little greater than the peltier. I'm in the IT business and it's the same rules with processors.
B

Have anyone tried to use silver grade anti seize as the heat transfer paste? It is only a dollar for one of the small blister packs and a small bottle ( 5 oz ) is less than $10.

dmcman73 said:
You have far to much heatsink compound on there. Between the hot surface and the peltier it should be a thin layer. The compound is only to fill voids/gaps not actually be a thick blob on the surfaces. Also, the surface of the heatsink should be the same size or a little greater than the peltier. I'm in the IT business and it's the same rules with processors.
Click to expand...

Thanks, I'll try to reduce the amount of thermal paste. I initially put a lot on there because the way the heat sink is built keeps it from being screwed down tight on the peltier. But I've ground down the posts now so that that's not a problem.

geoffey said:
Thanks, I'll try to reduce the amount of thermal paste. I initially put a lot on there because the way the heat sink is built keeps it from being screwed down tight on the peltier. But I've ground down the posts now so that that's not a problem.

Again, the compound is not supposed to be part of the heatsink, it's supposed to only fill in voids to eliminate air pockets between the two surfaces. I usually will apply a small bead in the center of the chip and then use some heavy stock cardboard, or a business card and then smear a thin layer over the chip.

The fact that the heatsink was not sitting properly on the chip due to the posts you ground down could be part of the problem you were having.

Resurecting this old thread to add the following info pertinent only to the Stout 7.3g conical which they offer peltier cooling "kits" for.

I recently discovered that Stout stopped offering the fan/heat sinks with their kits. I think it's because they had too many people reporting problems with the size of the heat sinks in relation to the 40mm x 40mm peltiers. This was definitely the issue for me. They replaced they heat sinks with ones that cover the entire peltier chip, and once I found a way to mount those so that the chip was tightly sandwiched in between the aluminum block and the heat sink, and once I changed the orientation of the fan to blow away from the conical, my system had immediate results.

I am pretty disappointed in that it took me a year and lots of trial and error to figure out that the problem was entirely caused by the size of the heat sinks. I went through about 10 peltiers in this process and bought two additional CPU power supplies, as well as forking over money for a couple of extra fans/heat sink combos.

But to their credit Stout sent me out all new harwardware, fans and aluminum blocks, once we figured out the problem.
Thanks to those on this thread for helping me out along the way.
You must log in or register to reply here.
Share:
Facebook Twitter Reddit Pinterest Tumblr WhatsApp Email Link

C
How to ground hot water heater element in cooler?

Conical fermenter & electric BK in one?