As I still have the homebrew obsession, I'm allowing it to lead me into many a DIY projects. Other than the labels (still working on the woodcut for that), I decided to try my hands at carboy covers.

I'm probably one of the only chicks on here, but I don't care - a lot of you have wives (GroosBrewz's made him some, and helped me out with advice - thanks again!), so maybe they can make em for you. 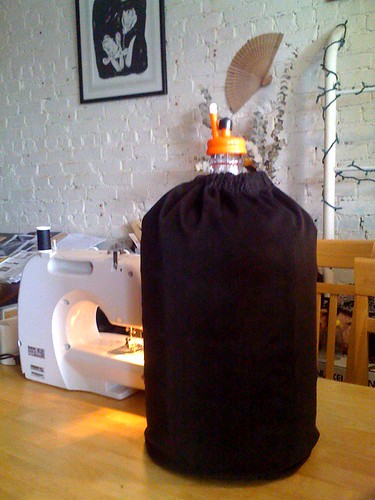 All I did was cut out a piece of brown corduroy to be about 36 x 24 in. Sewed a straight seam up the length, making it about 34.5 inches (as the carboy I'm using is 34 in. in diameter), then made a pocket along the top and the bottom and pushed elastic thru each (less elastic in the top and just bunched it more), sewed those up and then VOILA! Done.
I was thinking about making a pocket for a note card, but... I'm lazy. We can just safety pin the info to the cover. 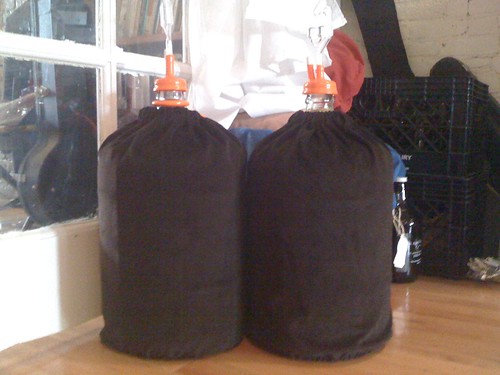 If you completely closed the bottom and added some straps, it would double as a carrier as well! Make it easy to lift them in and out of a freezer, so long as the seams were sturdy enough to hold the weight.

Excellent work. Brown corduroy sounds like an excellent material to block light... as long as they don't make noise when they walk
P

Nice to see another Brooklyn brewer on here!
C 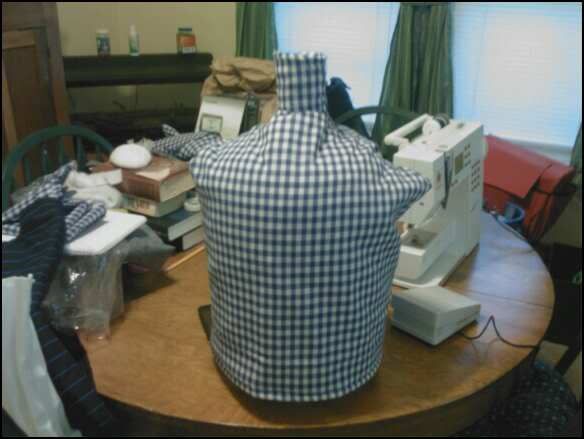 I'm probably one of the only chicks on here, but I don't care - a lot of you have wives (GroosBrewz's made him some, and helped me out with advice - thanks again!), so maybe they can make em for you.
Click to expand...

There are probably more females around here than you realize! Some of us have pretty "gender neutral" names, and don't really post any differently than the males around here do! I think you'd be surprised to realize that several of the people who post often around here are female.

Nice job on the carboy covers! I like the cat's suggestion of adding handles, and making a "carboy hauler" out of it!

I already miss your brewmistress avatar.....

and I think you need a shave.

and I think you need a shave.
Click to expand...

Sorry to go so

, but I am currently Red Green in real life! I decided to do some long needed home improvement projects, but like everything in life, nothing is ever simple. A simple "rip out the tub and put in a new one" is turning into an entire first floor bathroom remodel. Since the tub is being replaced, might as well replace the surround. That means some new dry wall. Of course, that means new plumbing and fixtures. Well, might as well replace the toilet, too. And since I'm doing that, I might as well fix those soft spots on the floor. Well, then I should put down some new tile. If I'm doing all that, I should replace the sink fixtures, too. All of those new fixtures will look terrible with that ugly wallboard, so I'd better look into replacing that.................

Anyway, sorry to steal this thread. I LOVE the carboy covers.
OP
OP

ChshreCat: Thanks for the idea! I'ma try it... just gotta figure out what stitch would be the best to really reinforce that.

Diatonic: Thanks! Considering all the beer they hold, they'll definitely be making the noise when they walk. Heh

Pivzavod: Hey Brooklynite! I'm about to post a new thread about the two Brooklyn homebrew shops. Be on the lookout, and give your opinions.

And finally last but for sure not the least -

YooperBrew: Yay chick brewers! And thanks! (And steal away. I'm just happy to be in the mix.)
OP
OP

Ok, so I took your advice and made a bottomed one with handles: 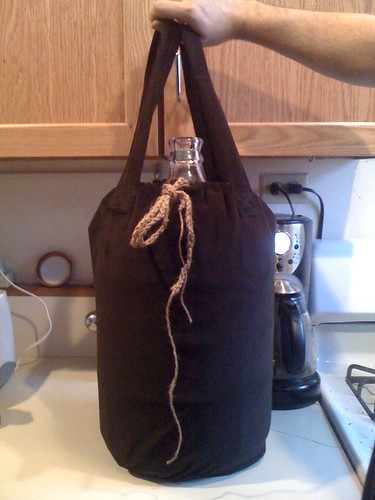 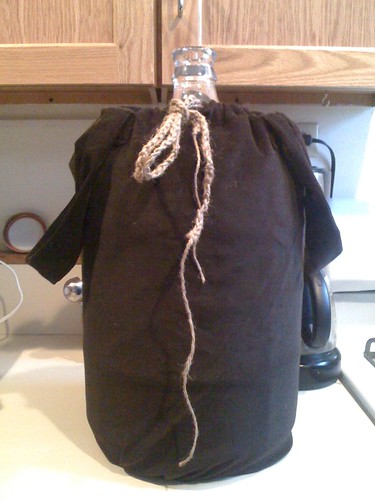 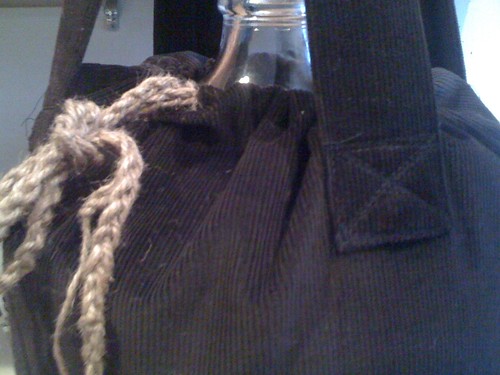 I was just having too much fun with this. Sorry, heh.

I just use t shirts but those are real nice.

Let me first say, "welcome" to all the ladies. I happen to be a guy who's married to a girl who doesn't cook or sew (I knew that before I got married, so I'm OK with that). I put up some pretty darn good meals each day, but my sewing skills are basic. I can run the machine, but I've only mastered a simple stitch.

Being that I'm fabric challenged, and I'm not going to get any help from the other half, I chose to use what I had available to make my covers; sweaters and sweatshirts. They're thick enough to provide good protection, make attractive covers, and recycle old clothing. Instructions are here: Recycled Carboy Cover

You have got the stitching right for sure. The only thing I suggest is to have the belts wrap entirely around the bottom of the carboy. I would hate to have one of the sides give way.

alliloop said:
Ok, so I took your advice and made a bottomed one with handles:

I was just having too much fun with this. Sorry, heh.
Click to expand...

Yay for other female brewers! I hope you don't mind if I resurrect an old thread instead of starting a new one...

How did these hold up over time? Are there any improvements to the design that you would have made?

I'm very slowly upgrading our brewing equipment from the basic Brewers Best kit that we started out with, and I managed to score some 6 gallon glass carboys this week.

Since we brew outside and ferment in the basement, my first thought was "How are we going to carry these things down the stairs?" Also, the room that we ferment in has a small amount of ambient light (fluorescent light left on & small basement window) that we'll want to prevent fermenting beers from being exposed to. Since I've a bunch of materials lying around already from various sewing projects, I figured I would construct something similar to this that doubles as a way to make transporting the full carboys easier and safer.

I'm planning to construct my covers with some denim that I have lying around, maybe lined with terrycloth to protect the glass a bit from any bumps or shocks, and I'll integrate nylon webbing into the bag for carrying handles. This may be overkill, but I'm used to constructing really heavy-duty canvas projects for the sailboat, so I tend to over-engineer things a bit... failure is not an option when you're making a bosun's chair.

Any thoughts on how completely covered the carboy should be to protect the beer from light exposure? I've seen some covers that stop at the beginning of the neck, and others that cover the carboy right up to the airlock.

Since I'm not planning to start sewing these for a couple of weeks yet, I would love any suggestions. If I remember to take pictures, I might write up a tutorial article for the project.
R

amie said:
Are there any improvements to the design that you would have made?

..and I'll integrate nylon webbing into the bag for carrying handles.
Click to expand...

This is a project I've had in my "to do" pile for awhile now. I just used up my roll of webbing on a kite project though, so this will have to wait again while I order another roll.


My plan is to have the webbing carrying the full load by wrapping all the way under the bottom like a Brewhauler. I may also add a band of webbing around the circumference a few inches up from the bottom such that the webbing can't spread apart far enough for a carboy to pass through. The light blocking fabric could possibly serve as the band but I'm not sure I would want to trust it.


The straight stitched box with a cross through the center is the right stitching pattern for joining the webbing. A zig-zag stitch for fastening the fabric to the webbing will allow for differences in stretch when lifting by the webbing.

I made my first one today and I'm pretty pleased with how it turned out! I used some of your advice to take the webbing all the way under the carboy, and used a zigzag stitch to secure the webbing to the fabric. The handles are made from one really long piece of nylon webbing that passes under the carboy and crosses underneath. I didn't bother with the strap that goes around though, because the zigzag stitching on the denim bag is keeping the straps securely underneath the carboy.

Pictures for your brewing pleasure: That is how you do it! Well done!

First ever cider, not sure what's next?

Topping Up With Carbonated Water In Secondary?