Another Brutus System is Born

Certainly jealous, I can't convince the wife to go AG yet because we do not have the space. But someday soon I will be in your same shoes with a brew in my hand and brewing my first AG on my own setup ^^

oooh, pretyyyy. I have one of those too, but damn, that thar is perty.

You have something to be very proud of, not to mention you can use it to make beer!

I'm having someone fabricate a stand for me as I don't weld and have a question about your burner mounts. I brew outside and it is often windy on brew day. Do you have any problems with wind interfering with the burners, causing them to blow out?

I brew in my garage for that very reason. When I ran tests on the gas sytem outdoors I had a lot of problems with the flames on the burners blowing out and the pilot flame as well. I would recommend 360 degree wind shields on your rig for brewing outside. Good luck with the build and thanks for the nice comments. I was rather suprised to see this thread get bumped.
F

Very Impressive, Looks like quite the build. I can't wait for the day I can begin to create a brewery of my own!

Thank you very much mrbowenz, I am quite honored. Sorry, I didn't see this post until now
OP

Got some new upgrades for the brewery. After a many brews on the new system there were some changes that needed to be made.

I moved the probe thermowells from the outlet on the kettles to the top of the pump. I was having a problem in the mashtun with stuck sparges. I tried everything from a higher grain/water ratio to rice hulls and still was getting them. I finally decided that the problem was the location of the thermowell. This is what it looked like before. 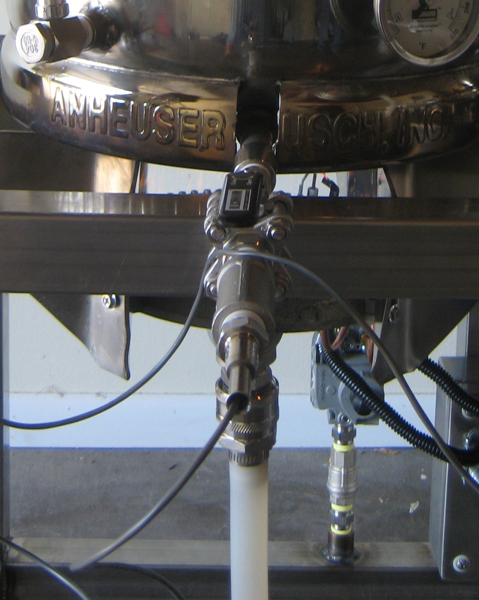 What was happening was that the thermowell was taking up so much space in the T fitting. Pieces of grain and whatnot kept getting stuck and blocking the flow. Not to mention that the 90 degree angle wasn't helping the liquid move easily. So I decided to move them to the inlet of the pump head. There is much less restriction and it will work ten times better than before. Also pictured are my new stainless steel Chugger pump heads. I got them for $40.00 each on ebay because they had some rough threads. I didn't have any problem with the threads and they were well worth the $ I paid for them. They came fully assembled and ready to install. 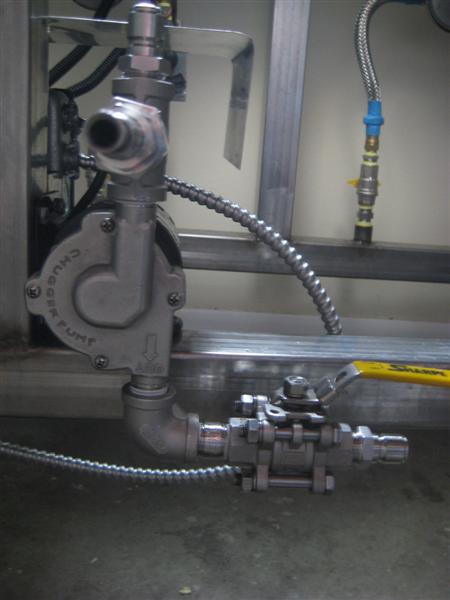 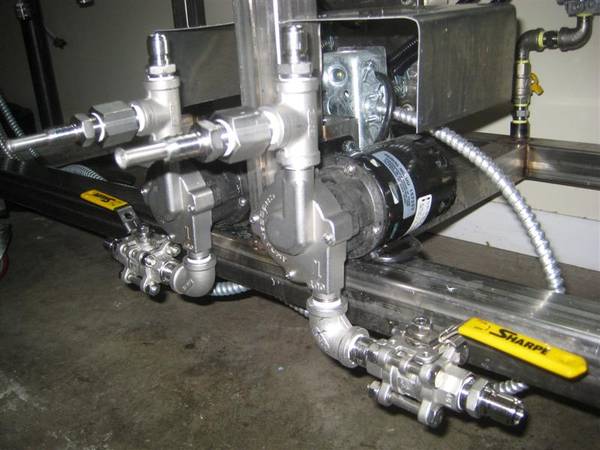 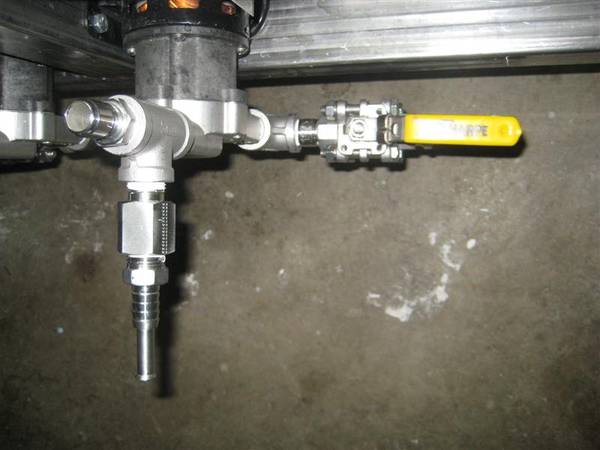 The next problem I discovered was the return tube going back into the mashtun. It wasn't adjustable and the wort was splashing back into the tun. As a result there was a lot of foaming and I want to get the best head retention possible since the proteins only form once. I needed something that was food safe, temperature safe, and adjustable. I had remembered The Pol, hope all is well with that guy, had used Locline for his return hose. So I ordered one from McMaster and it was here the next day, as usual! 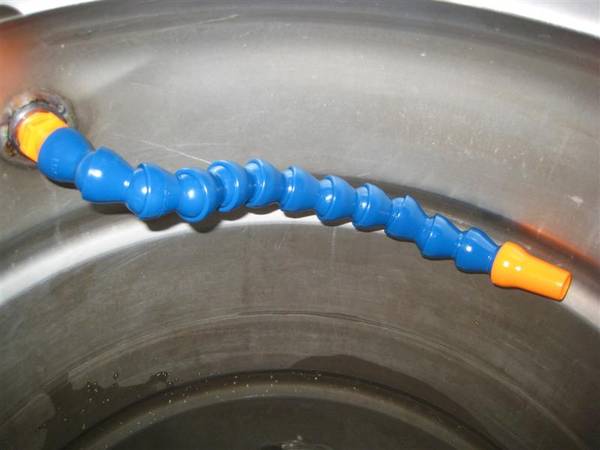 I also was having a problem with reading the temperature of the wort going into my fermenter. I was previously using the Blichmann Thrumometer but the darn thing was such a hassel on brew days. I had tons of problems; it was way too small and restriced wort flow, when submerged in sanatizer the temperature sticker got a bunch of air bubbles in it, the temperature doesn't go down to lager temps, I had to use two seperate pieces of hose. Below is a picture for those who are unfamiliar with it. I own a few Blichmann products and this one was by far the worst I've purchased, sorry John!

So I went to MoreBeer, who I've tried to shy away from the past six months, and they had an inline thermometer with stainless quickdisconnects. Well, since my entire system is outfitted with SS QD's I went for it. 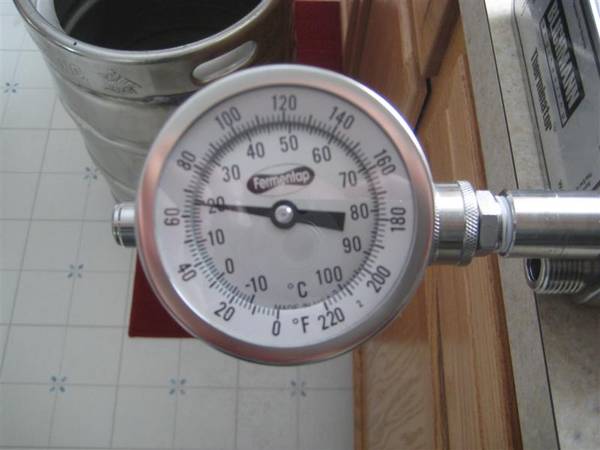 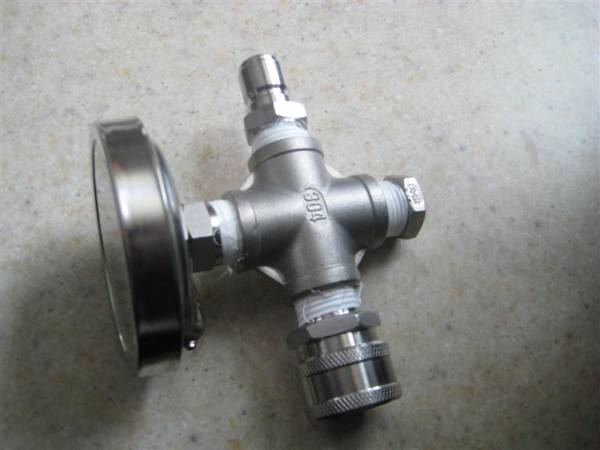 Last but not least are my sight glasses, the reason I was trying to avoid MoreBeer. I purchased three of their 16" sight glasses with adapters, $65.00 EACH!, about two years ago. At first I thought they were great as they looked like all stainless construction, nice protective enclosure around the glass. What could possibly go wrong right? EVERYTHING!

First off, I find out that the casings aren't even stainless steel. I soaked the sight glass in starsan and when I pulled it out the thing was no longer shiney. It was black and had a very rough feel to it. I'm assuming it was plated with some sort of finish, either way it was garbage. I also had lots of problems with the threads on the top caps. I stripped out the other two taking them off after brewing to clean out the sightgage and adapter. These things were junk and were way too expensive.

That brings me to last week. I remember that BobbyM had some sightgages that he was selling on his website http://www.brewhardware.com/ I purchased three of his sightglasses for less than the cost of 1 MoreBeer sightgage. BobbyM's quality is far superior and I LOVE LOVE LOVE the vinyl number markers. They look super sharp and my half blind father in-law won't have a hard time seeing the number markings on brewday. 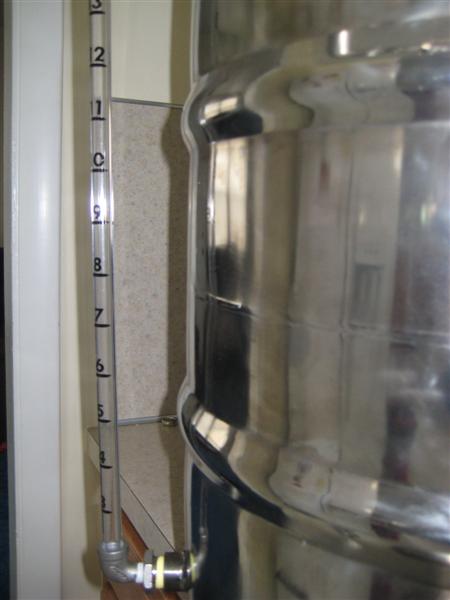 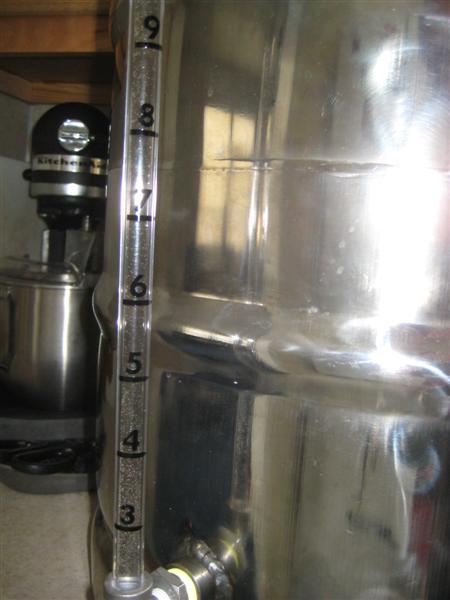 Use the half couplings anywhere you don't need to screw something on the inside such as a sightglass, thermometer.

Use the full couplings where you want something on both the inside and outside such as a ball valve on the outside and dip tube on the inside.

Shweaty, that is sweet setup. Do you have plans drawn up for your frame? I am about to have one built and I like yours, a lot.

Hawgbranch said:
Shweaty, that is sweet setup. Do you have plans drawn up for your frame? I am about to have one built and I like yours, a lot.

Post #31 has the cuts for the stainless and the burner bracket dimensions. I used to have sketchup documents but I think I trashed them after the build was complete.

Nice job! Did you mig this? What wire/gas did you use?

ranchonodinero said:
Nice job! Did you mig this? What wire/gas did you use?
Click to expand...

schweaty said:
Post #31 has the cuts for the stainless and the burner bracket dimensions. I used to have sketchup documents but I think I trashed them after the build was complete.
Click to expand...

very nice... I can't believe how quickly stuff adds up.

Very true, but you get what you pay for. I love having a RIMS system that practically runs itself.

well I am not exactly sure what type of system I will end up with, probably a RIMs. I have 2 keggles now.

just the thought of what I have spent thus far on my first batch is crazy expensive. going with a keezer, keggles, fermentation fridge all before i even brewed my first batch. l

all that stainless makes me Schweaty!

I would also be interested in a schematic of your control panel as it looks what im working on putting together for my RIMS build. Any pictures or diagrams would be great.

Location
Beer Capital of the World

What did you use for your propane flex lines? I ended up using copper bc I couldn't find any high temp flex..

Any way you could go into a bit more detail about your ignition system?

Beer, What a beautiful thing

I would like to have more info on your ignition system also. PLEASE!

Great build schweaty, I am to the point in my own build where I am trying to decide where to mount my ignition modules. What kind of conduit did you use for the wiring running from you main panel to the module box? I looked around at lowes last night and was overwhlemed, I never new there were so many different kinds of conduit. I originally had things run with no conduit and it made my rig look like a birds nest, so I am reevaluating. Yours looks about as tidy as one can look with remotely mounted modules IMHO. Cheers to a sick rig and a very helpful build thread...wnc
OP

I don't have any problems priming my system Topher. I just run the liquid through the lines to get the air out, hook the outlet hose female disconnect to a male disconnect and let it rip.
OP

Not sure how much info on the ignition system you're looking for, but here is the parts list and the supplier from which I got them.

TopherM said:
[...]Maybe it doesn't matter as much since Chuggers are self-priming??[...]
Click to expand...

The Chuggers that are essentially March 809/815 clones are not self-priming. At all...

Another Brutus in the making
2