I missed that, sorry.
OP

day_trippr said:
Is it possible to embed text labels on the surface for those connectors & ports?
Like "Heat" and "Cool" (or at least "H" and "C") above the duplex sockets?
Click to expand...

But yeah, it is possible. I'll be modifying the design today to add that in, but probably won't actually print a new enclosure until I need to. I probably should have thought about that before I printed the first one, but I was focused more on getting everything to fit in a box that was small enough to print on my 3d printer, and honestly didn't even think about it at the time.


LBussy said:
The problem is: I'll bet he's got a > 1 day print there. If I were to guess, it's only about $5 in material, but tying up your printer for another day for an H and C is an emotional decision he needs to make.
Click to expand...

Hahaha, exactly. Also after that, taking everything apart and putting it in a new box.

One other option I have is engraving that info on the existing box with a laser cutter/engraver. I have a membership at the local makerspace here in Tulsa called the Fab Lab, and they have a pretty slick laser cutter, so I'll probably go that route.

100amps said:
For the RJ45 jacks it says you can wire them in series like you did. That's actually parallel. But that's nitpicking.
Click to expand...

Ah, gotcha. I'll fix it, might throw someone off.


100amps said:
An enhancement I recommend is using a fused IEC power inlet. Say 8-10 amp fuse. But make sure it's one that has legitimate safety certifications. CSA/UL or whatever. The only way to ensure those certs are legit is to buy it from a responsible supplier. (Mouser, Digikey, etc.)
Click to expand...

I did get the inlet from DigiKey, but I did not get a fused one. I'll look into adding a fuse to the AC circuit

100amps said:
An enhancement I recommend is using a fused IEC power inlet. Say 8-10 amp fuse. But make sure it's one that has legitimate safety certifications. CSA/UL or whatever. The only way to ensure those certs are legit is to buy it from a responsible supplier. (Mouser, Digikey, etc.)
Click to expand... 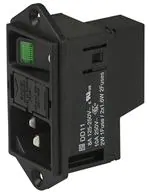 Of course, these are $19.25 and Chinese ones can be had for $1.50. @day_trippr has often noted the switches on the cheaper ones burning out.

Ah, but remember, the bulkheads we all were using were sold as "10 Amp" but sported 6A or even 5A switch modules.
The Holy Grail (post #19) looks strong. I need to get mine installed, just been too busy...

I saw a fused IEC inlet (10A) on Digikey.com for like $1.50. I consider the switch optional. I leave mine running or just pull the plug. It's still probably engineered in China, but Digikey almost certainly do their due diligence wrt safety certs.

Of course shipping is on top of that.

Lotsa options. For me, the fused is less important than the switch. Pretty sure that relay is going to be my "fuse" before the fuse is.

Relays do make decent fuses. Sure they smell like burnt plastic, but it's because they're 'cloud based' which means they communicate with your smoke detector to provide you with a convenient wireless notification that your controller may be near some tolerance limit. The word 'fuse' was, in fact, derived from relay contacts permanently fusing together, ensuring an optimal low impedance connection.