I've recently changed my mind about my initial investment in controlling the temperature of my fermenters.

Placing a carboy in a bath of water that is controlled by an inexpensive fish tank heater worked for years until I purchased a conical fermenter. There is no way to fit a conical into a bath of water.

Thanks to the prices of PID controllers coming down considerably, I decided to purchase an inexpensive controller for $16 on Amazon that would control a brew belt and see how it worked.

The built-in SCR will control a heat load up to 1000 watts or 8.3 amps. The Brew Belts are typically only up to 25 watts.

The display on the PID is showing that it is controlling the temperature of the wort by +/- 0.5 degrees. But the reality of it because I chose to tape the thermocouple onto the outside of the fermenter and cover it with a piece of shipping foam is +/- 1.5 degrees. That is still awesome considering I don't have to place the probe into the wort and risk infection plus having to clean the probe and clean the wire between brews.

This is inexpensive solution to control the temperature of a fermentation bucket, carboy, or conical. It doesn't take the place of controlling a fermentation refrigerator or keezer. The #1 solution for that IMOP is the A419 PID controller from Johnson Controls.

But for day-to-day fermentation temperature control of a carboy strapped with a Brew Belt and this inexpensive PID controller for $16 is perfect.

Pics are shown below.

I just glanced at the controller you linked and noticed three things.

First, it is not a PID. It's a thermostat, turning the heating element either on or off.

Second, it has a lot of negative reviews, for a variety of reasons affecting performance.

Third, it has a narrow temperature range, higher than where I ferment a lot of ales. (Lower bound is 68°F/20°C)

The A419 is a simple on-off controller as well, but it's a dinosaur at this point and overpriced at that.
But if all that works for the OP, vaya con Dios!

Over in the AHA forums,"Topic: everyone's favorite fermentation control method " is an interesting read.

So for a person who was interested in getting into automating fermentation temperature control, what would you recommend?
OP

The answer to that question BrewnWKopperKat depends if you plan on lagering. If "yes" then you'll need a fermentation chamber which could be either a small apartment sized refrigerator, or a meat chest freezer / refrigerator because the lagering process takes place in small incremental step decreases and then increases. Somebody's old refrigerator is perfect as long as it's obviously in working order.

If you don't plan on lagering, then you'll need to have a generally stable temperature environment such as a basement, and then a minimal investment of a brew belt and a temperature controller if that environment tends to be in the lower 60 degree range.

I think RPh Guy missed the point of my posting that someone can spend just $16 and keep the yeast in their fermenter very happy within + or - 1 degree. It received a rating of 4.5 out of 5, but my rating so far would be a 5 because it has not failed to meet my expectations to keep my conical fermenter right were I want it.

So am I happy with 1 degree either way for a controller that costs half the price for the price that I spend on just 1 grain bill? Hell yeah. Even if the error in the controller was 3 degrees in either direction I would still be happy considering the wide temperature range that modern yeasts will fully attenuate my wort.

But again . . . The answer to your question all depends if you want to make the investment to lager using traditional methods. If not, keep it simple with a brew belt and an inexpensive controller.

Check out the reviews (it has 3.7/5 rating).. You're saying something different. 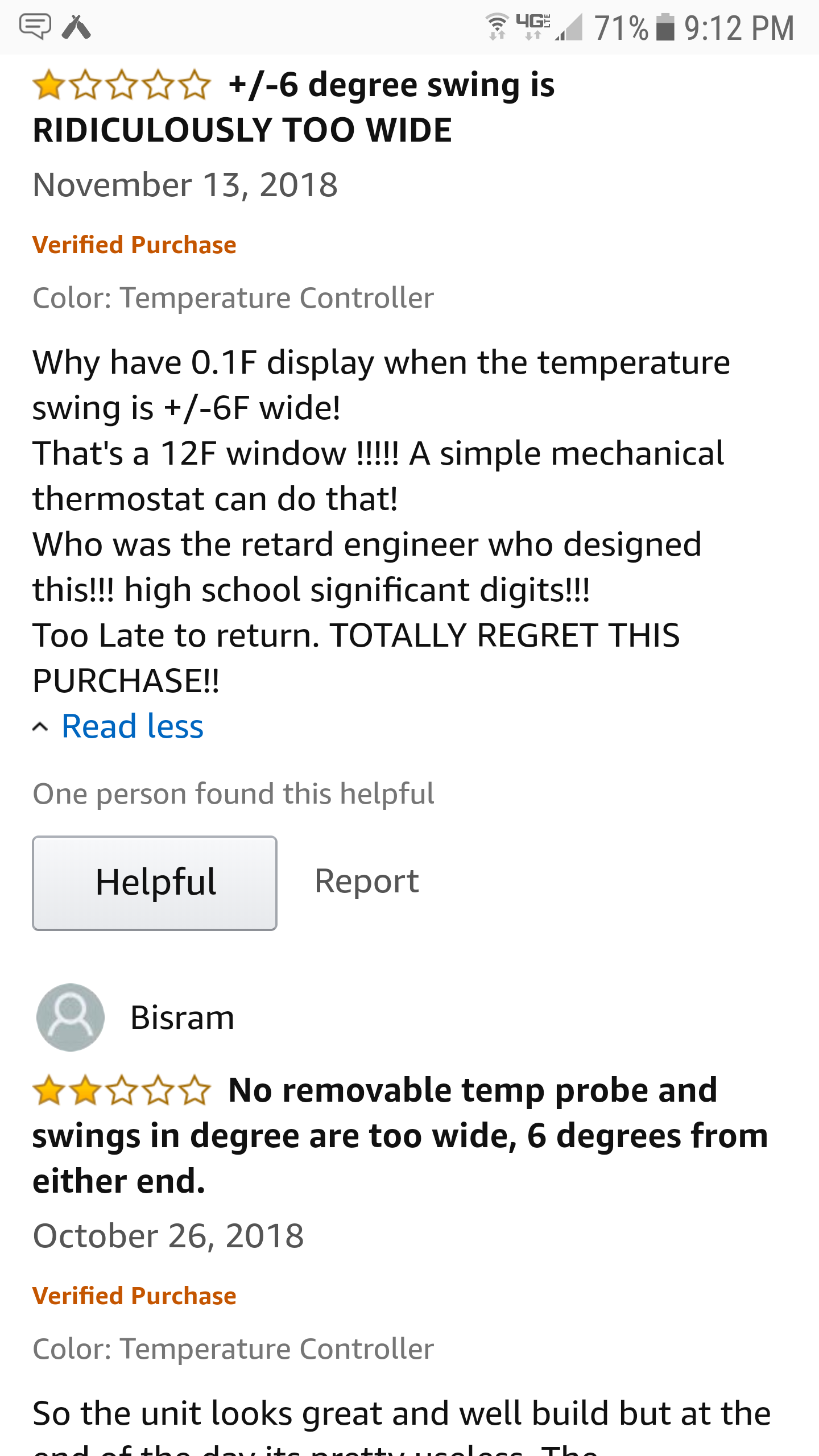 RPh_Guy said:
Check out the reviews (it has 3.7/5 rating).. You're saying something different.

You've contributed nothing to this thread.

The reviews from Amazon are 4.5 out of 5. You're an a$$ for posting the most negative comment from the Amazon thread.

I'm telling fellow home brewers that for $16 which includes free shipping that they can hold their desired fermentation temperature within a degree of their setpoint then what's your problem?

You don't have the product that I have. So back down on the attitude unless you are too thin skinned to get called out on it.

The delta T is plus or minus 1 degree on my system. Are you calling me a liar?

This simple $16 investment has not only helped me, but has also helped a lot of people in my local home brew club, and can help a lot of people here on Home Brew Talk if for example they cannot hold a minimum temperature for US-05 of 64'f.

It's people like you that bring this forum down and give it a reputation of negativity.
Last edited: Apr 2, 2019

Glad it helps you. I'm just pointing out I don't think it would be a good investment for most homebrewers.
Thanks to your post, now any potential buyers here know this product is a cheap option to consider and they will decide for themselves.