I made up my first 5 gallons as indicated by his recipie two weeks ago.
Decided to do an experiment for the next batch that I just finished.

This time used gallons of apple juice from whole foods already in 1 gal glass "carboys" It was cloudy apple juice. Pasturized. No additives.

Corrected for additional juice and added 5oz corn sugar for each quart of added 100% juice. Organic stuff from whole foods.
I did make a small yeast starter, (distilled water and a lil bit of apple juice,) about an hour before pitching and eyeballed it to equally split amongst the 5 gallons made with montrachet yeast.

The juice may be too much, 32oz, who knows. It's an experiment.
I couldn't take an OG reading unfortunately. I dropped the hydrometer while hauling equipment upstairs.
I am thinking the apple cranberry and the one with cinnamon will be the best.
I'll ferment for a month and then bottle for another. Will sample at bottling and update.
Anyone have any input?

When doing these 1 gallon batches, are you still using the whole packet of yeast for each gallon or do you split the yeast up equally for each batch? I assume you just use a rubber stopper and an airlock, or just using foil?
OP

Split up the pack of montrachet wine yeast equally (eyeball) amongst the 5.
I did make a small starter w/ distilled water and a little bit of applejuice.

#6 rubber stopper and a 3 piece airlock.

HAHA ops.
I have a tool I'll sterilize and grab 3 of them out when I get home.
Guess I should have done some research before doing this on the fly. 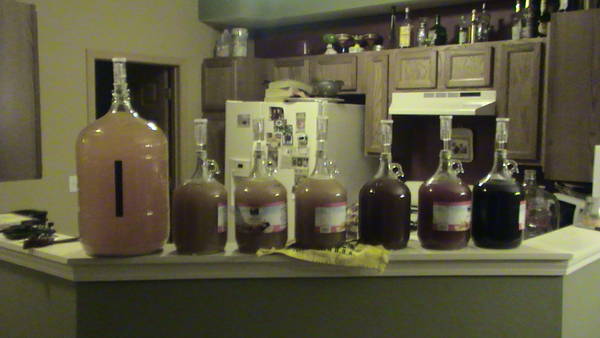 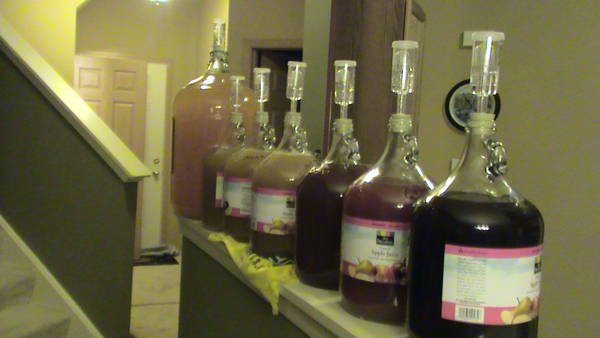 gahrens,
hey these look great, I am curious to see how they turn out. You mentioned you may bottle them this weekend, keep us posted on the tasting results. Thanks for your post and messages.

I did a batch with one cinnamon stick left in the primary for a month.

It was terrible, way too much cinnamon.

Steeping a cinnamon stick in a quart of water and then adding that and leaving the stick behind add plenty of cinnamon flavor IMO.
OP

Finally was able to bottle this weekend. It seemed as if the Premier Cuvee yeast was a bit more tart. The one with the cinnamon stick didn't seem like it was over done. My friend liked the black cherry the best, pomegranate was alright, the cranberry was very tart.
My friend and I will sample these in one month and share the results when they get carbed up. I realize that they will most likely taste better in 4-6 months from now.
Looked at the dates and realized these have been in primary for 2.5 months. Ops, I get busy.

With the spices the amount of time they are in the fermenter makes a big difference.

Since you got some jugs laying around, you might whip up a one gallon batch of Joe's Ancient Orange Mead, commonly abbreviated JAOM. The recipe shouldn't be morethan four mouse clicks from here even without me driving the search button.

Once that is ready (4-6 weeks) you'll have a perspective on what happens with cloves, cinamon and orange. And a gallon of booze.

gahrens said:
Finally was able to bottle this weekend. It seemed as if the Premier Cuvee yeast was a bit more tart. The one with the cinnamon stick didn't seem like it was over done. My friend liked the black cherry the best, pomegranate was alright, the cranberry was very tart.
My friend and I will sample these in one month and share the results when they get carbed up. I realize that they will most likely taste better in 4-6 months from now.
Looked at the dates and realized these have been in primary for 2.5 months. Ops, I get busy.
Click to expand...

I just made a 5 Gallon batch of with 4 gallons of Apple Juice and 1 Gallon of Black Cherry juice, and using Safale S-04 in place of the Montrachet while being fermented in the low 60's. Have any notes or anything stand out when you tasted the Black Cherry Apfelwein?
OP

My palate isn't the greatest, it wasn't foul by any means. My bottling buddy really liked the black cherry. We are going to sample a few in a month and see how they are coming along.
OP

They didn't really pick up the flavors of the juice so well at all really.
The cranberry is really tart.
The cinnamon is barely noticeable.
The different yeast seemed a tad bit less dry.
So far.
Will give it a couple more months.

How was the pomgranate one? I've got a similar one going, kinda a graff with pomgranate right now, and it looks like chocolate milk. While the others have finished and started to clear, this one is thick looking.
OP

I'll try that one this afternoon. None of mine on this batch had become clear. I used un-filtered apple juice that was cloudy to begin with.
The ones I tasted didn't take on much of the flavor, just made differing degrees of tartness as far as I can tell.

Let it sit for another month or two and it'll get clear.
OP

This stuff has been sitting in the basement (65*) for since bottleing. I cracked one with the primier couvee yeast, not bad.

After I get over my cold I'll be sampling the others. I finished my keezer and have a few chilling in there for sampling. I love my keezer.

I'm interested to hear how iammatt's and PSmurf78's concoctions turned out.

As a side note I fermented another 5 gals of apfelwien in september and it had been aging in primary for 5 months. Kegged on Thursday and sampled this weekend. Wow, age treats this stuff very very well.