If anyone would like a detailed parts list / how-to, please reply in thread.
* I do need some help too, please look for asterisk at the end.

It can clean kegs, keg posts (any posts that accept a QD, really), my FV (Fermzilla All Rounder [including lid posts]), keezer lines, and taps.

I had been planning to make this for at least 3 years. Originally, I wanted to build the Scrub Master:

First I want to acknowledge the thread that started this. There were a number of people, myself included, wanting part numbers and a parts list but the info was never posted. My version is similar to the original thread but not exactly the same. Here's a picture of the finished product...

A phenomenal build with excellent instructions. But I decided to go with something smaller. Based on this:

Like many of you have already done, I've now done also. Simple sump pump design with PVC fittings that allow for cleaning the IN and OUT posts as well as a threaded fitting so that I can remove the spray ball for cleaning the fermenter as well. Notes: - I purchased a 1/2HP sump pump with a...

Mine isn't all that different. There is a straight pipe from the top of the cross. I used some bushings on the sides of the cross to get the barbs connected to it. 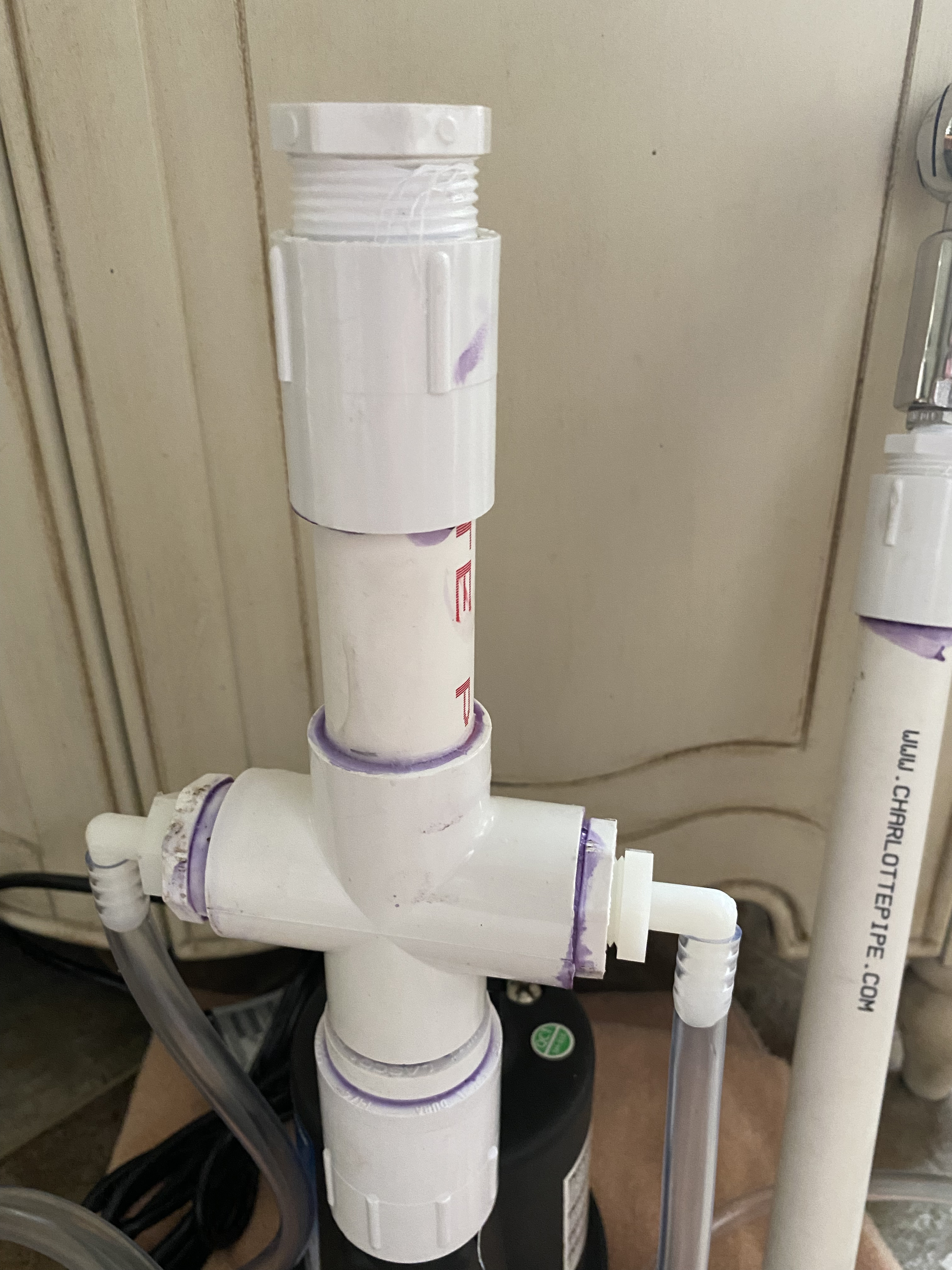 Originally, I wanted to install some tees figuring I could use the extra outputs as needed for other cleaning applications. Dry fitted the parts and it would have been too wide to fit in the bucket so, I scrapped that idea.

One mistake we made was cutting the lid incorrectly. That's why I bought 2 lids in the first place, knowing I'd screw something up. 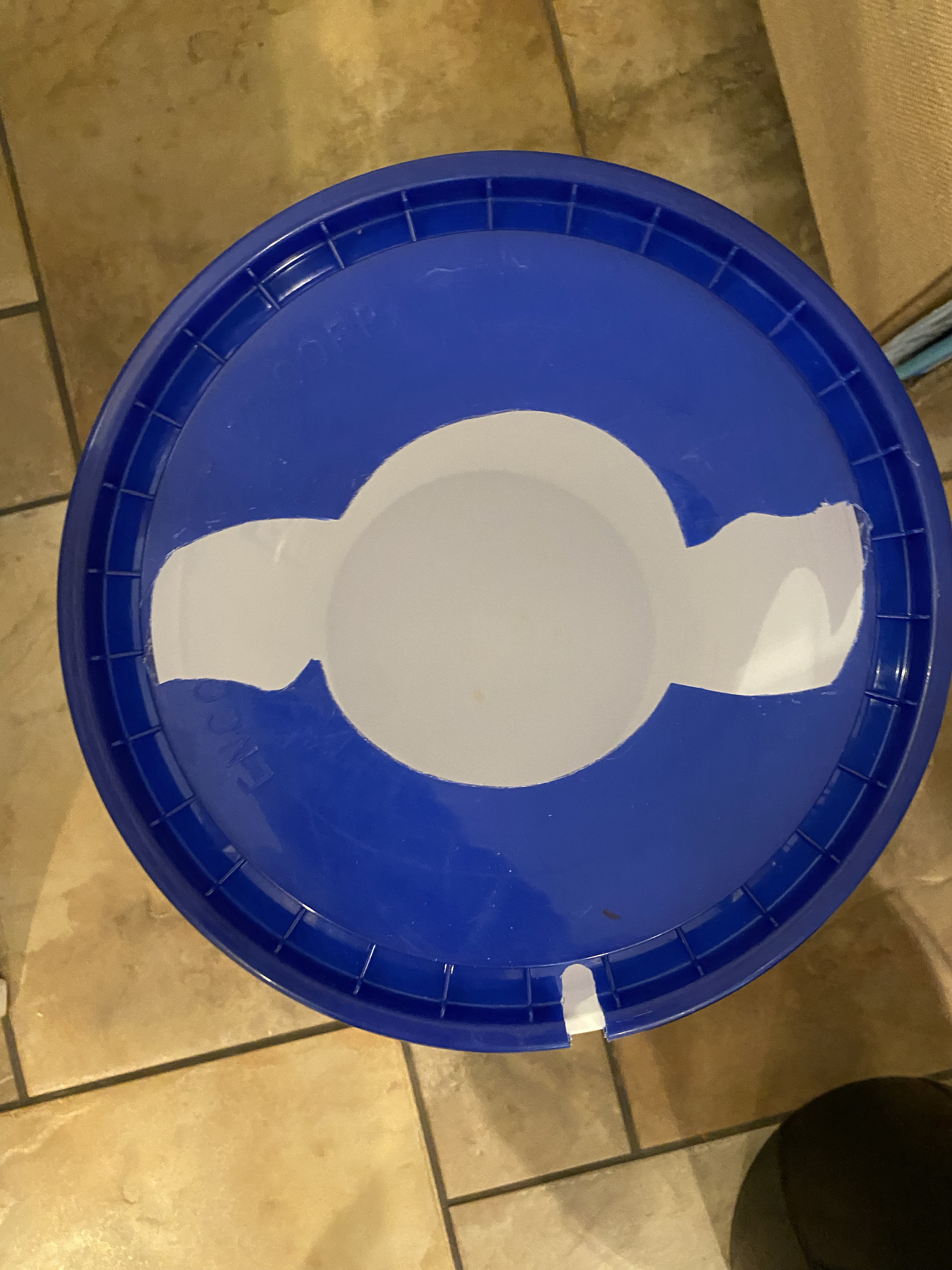 Note one side cut for the pump's power cord.
This created several problems. The rubber gasket (officially called a PVC coupling by the manufacturer) had much less support from the lid. That caused it to droop further down into the bucket. Which caused the keg to lean when it was "standing" on it. 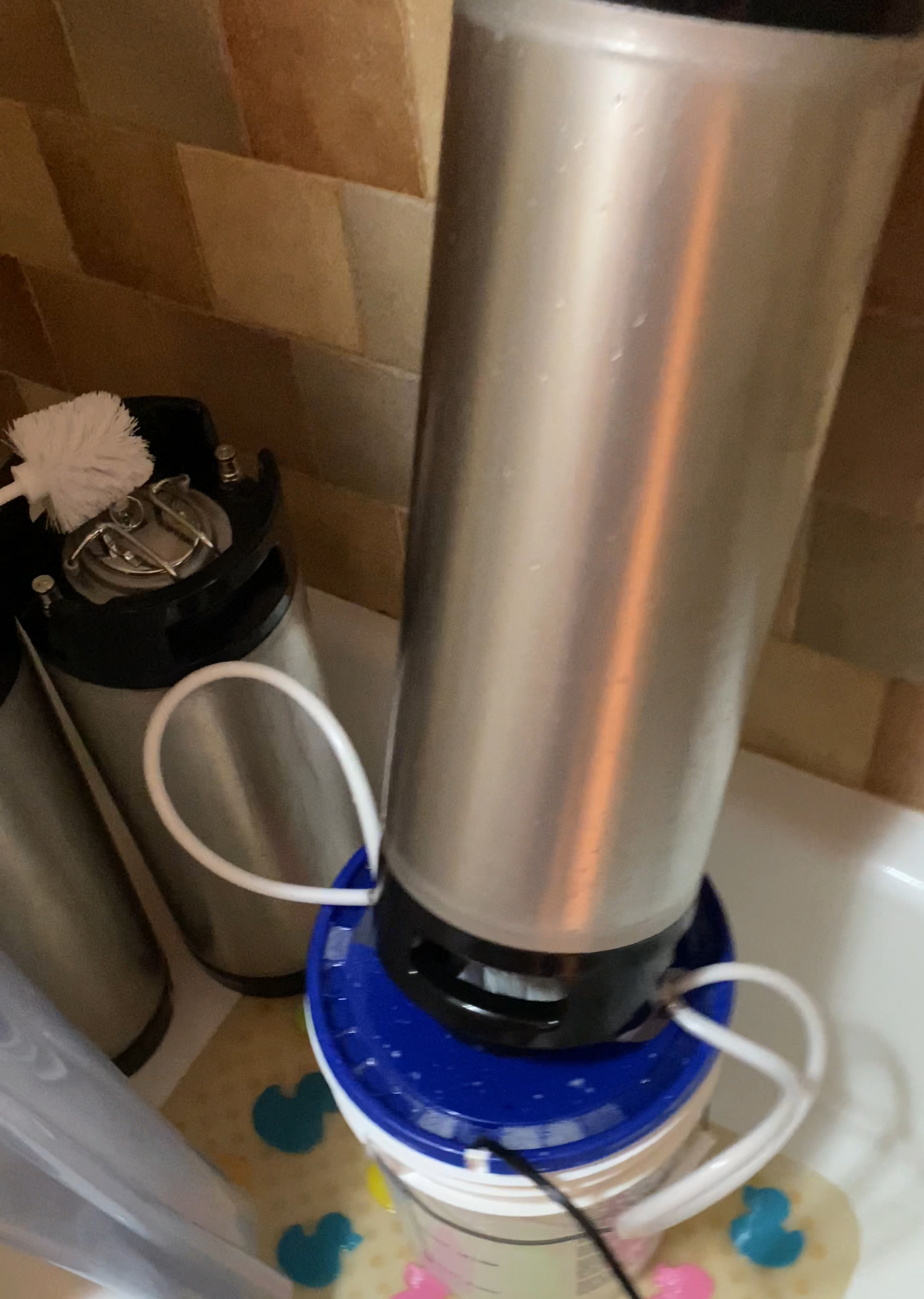 Before I forget, the riser pipe with the CIP spray ball is installed in the photo above.

The other issue that created was the QDs needing to be sitting pretty high up to prevent the hoses from pinching. While I did get it all to work out without pinching the hoses, I just didn't like how it looked / felt. Left me feeling unconfident. 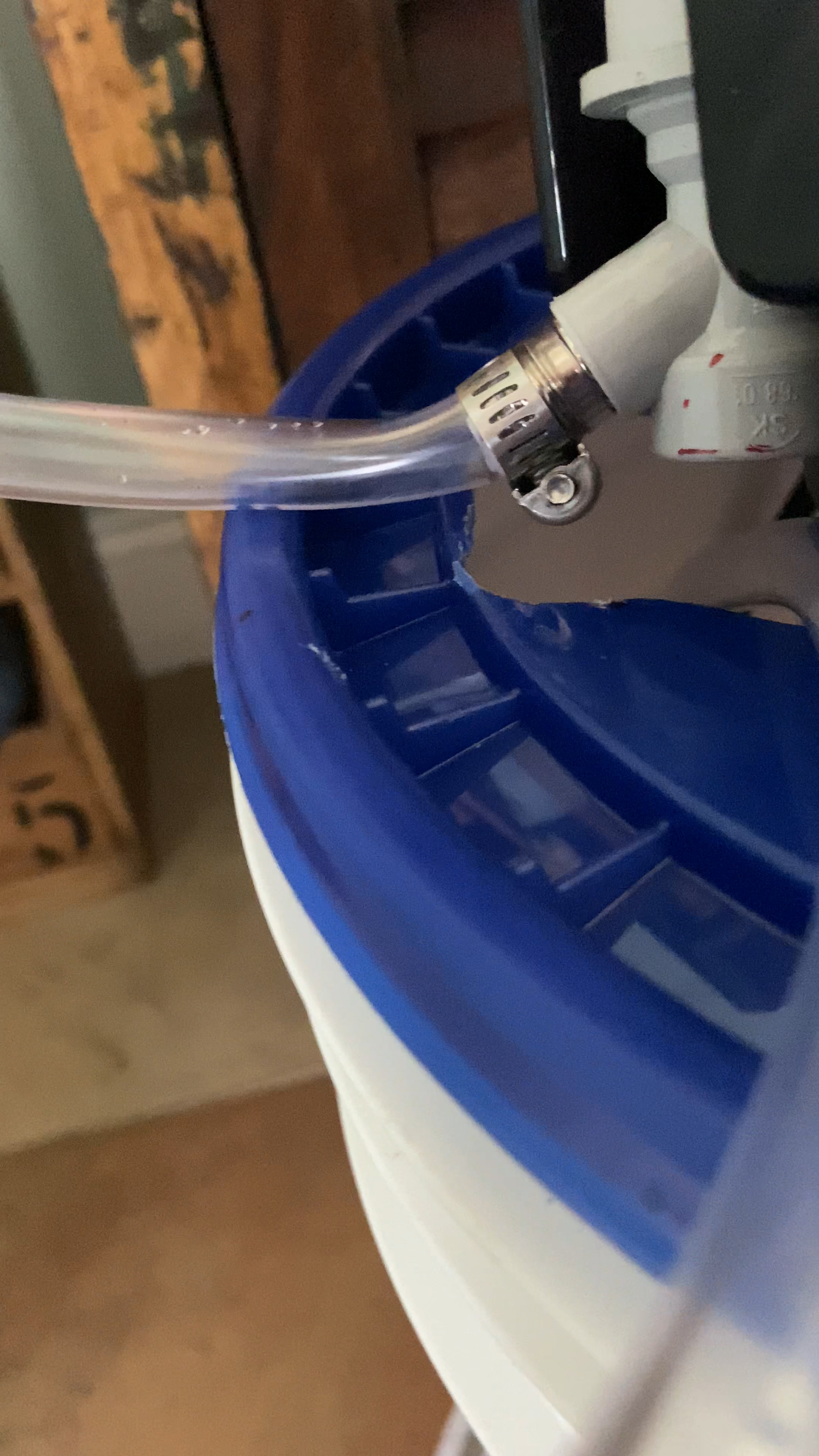 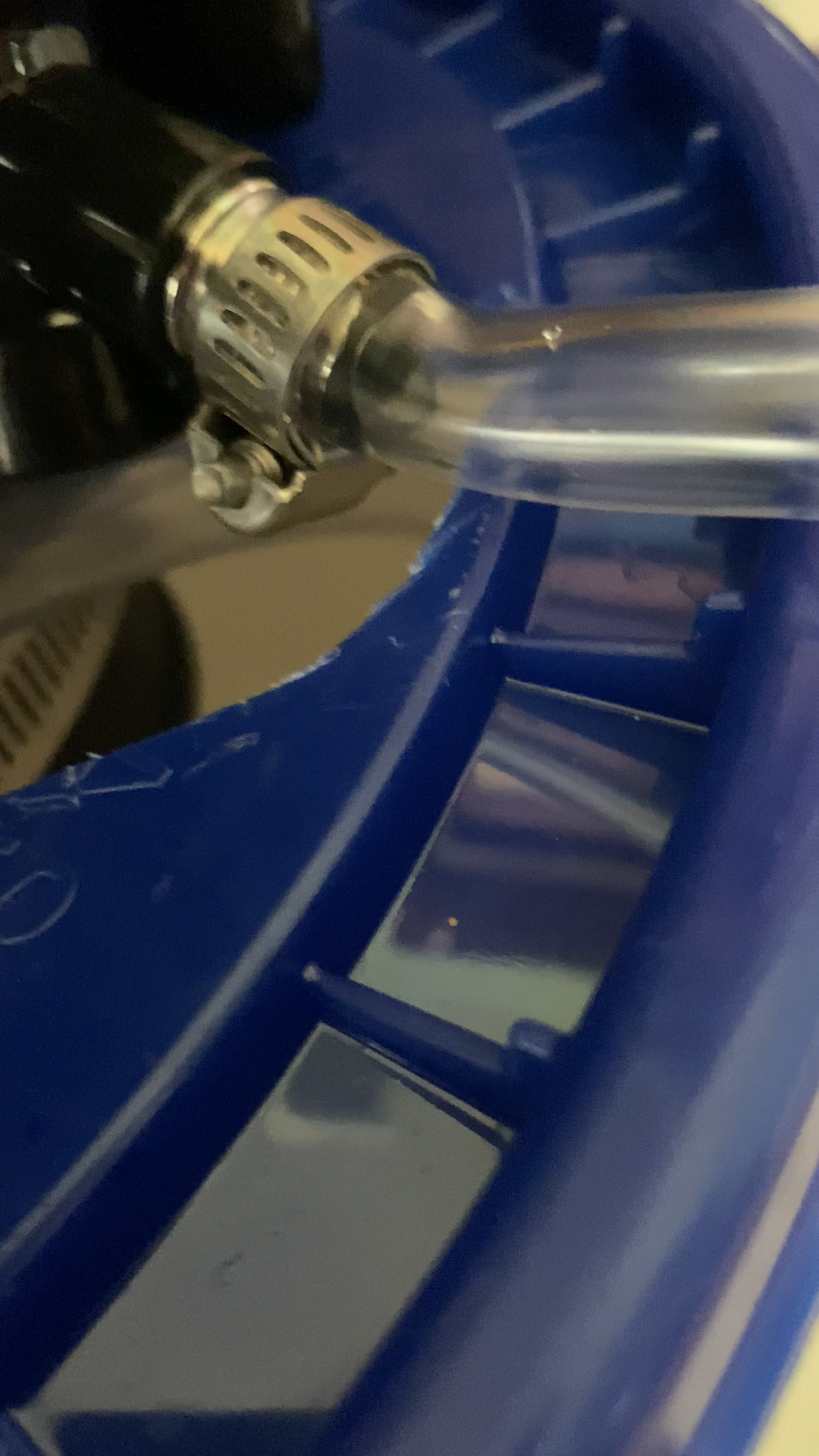 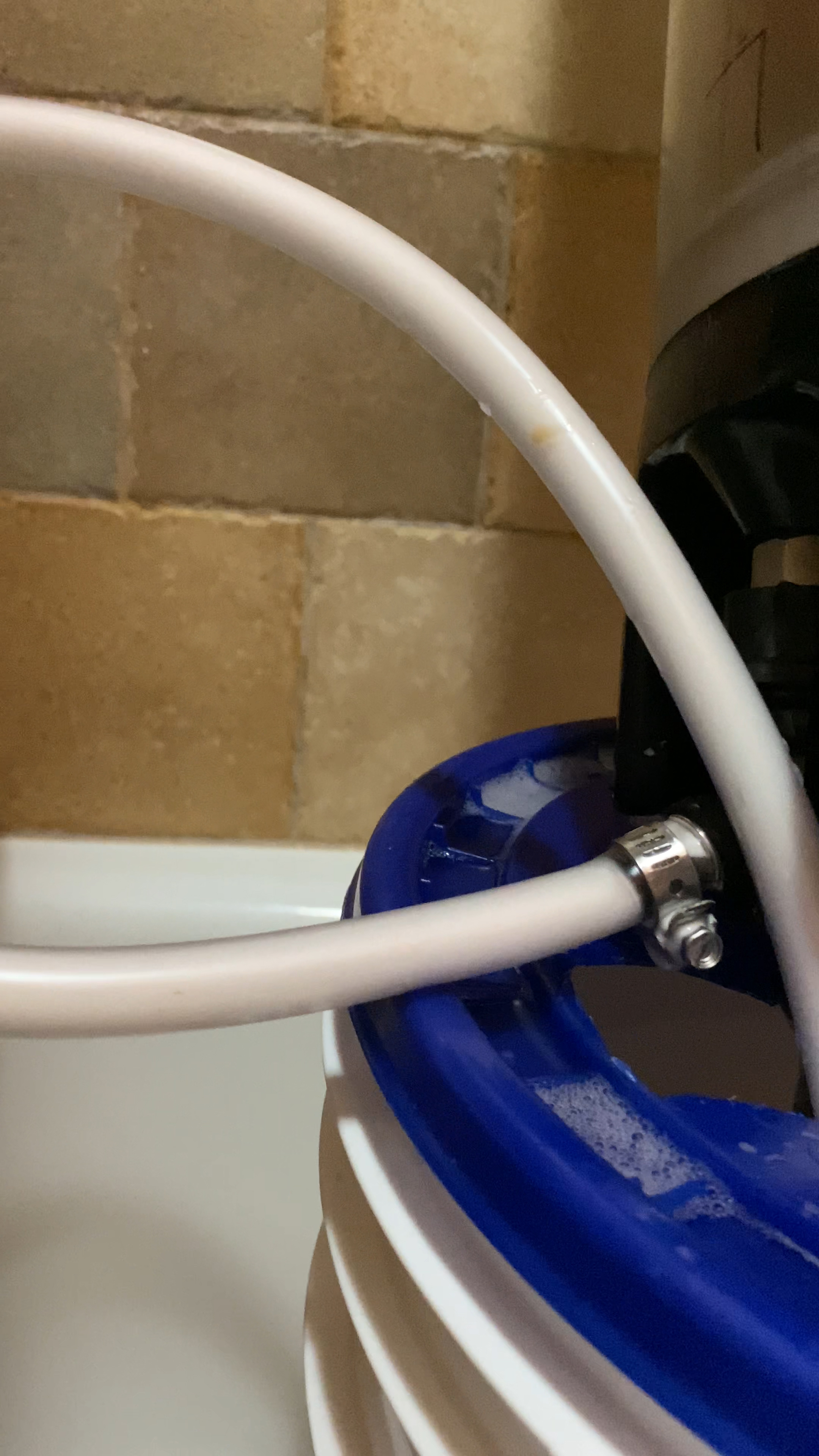 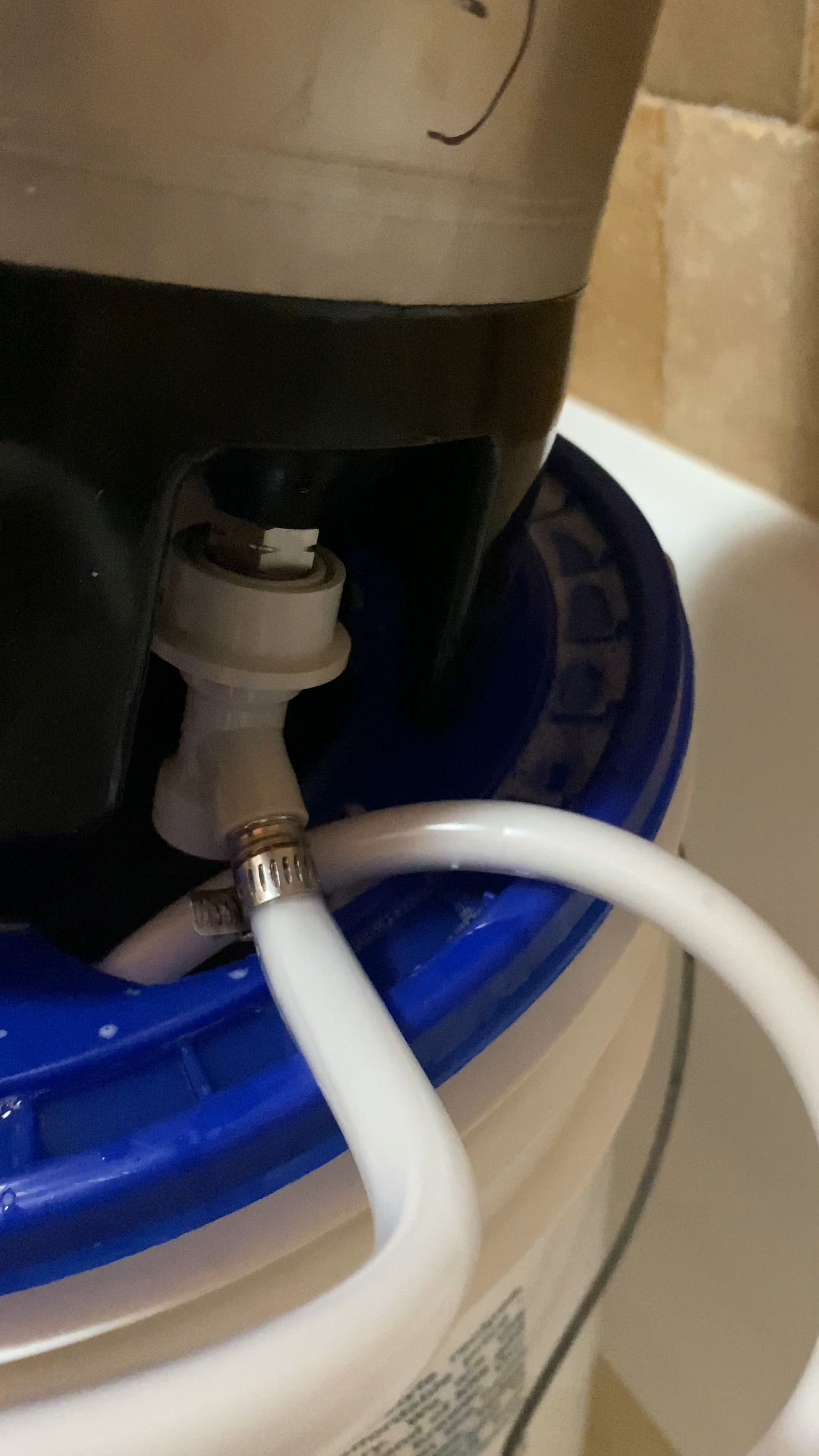 ^Hope that GIF worked...
So, we cut a new lid, the right way.
Seen here with all the parts neatly packed in it. I love it. 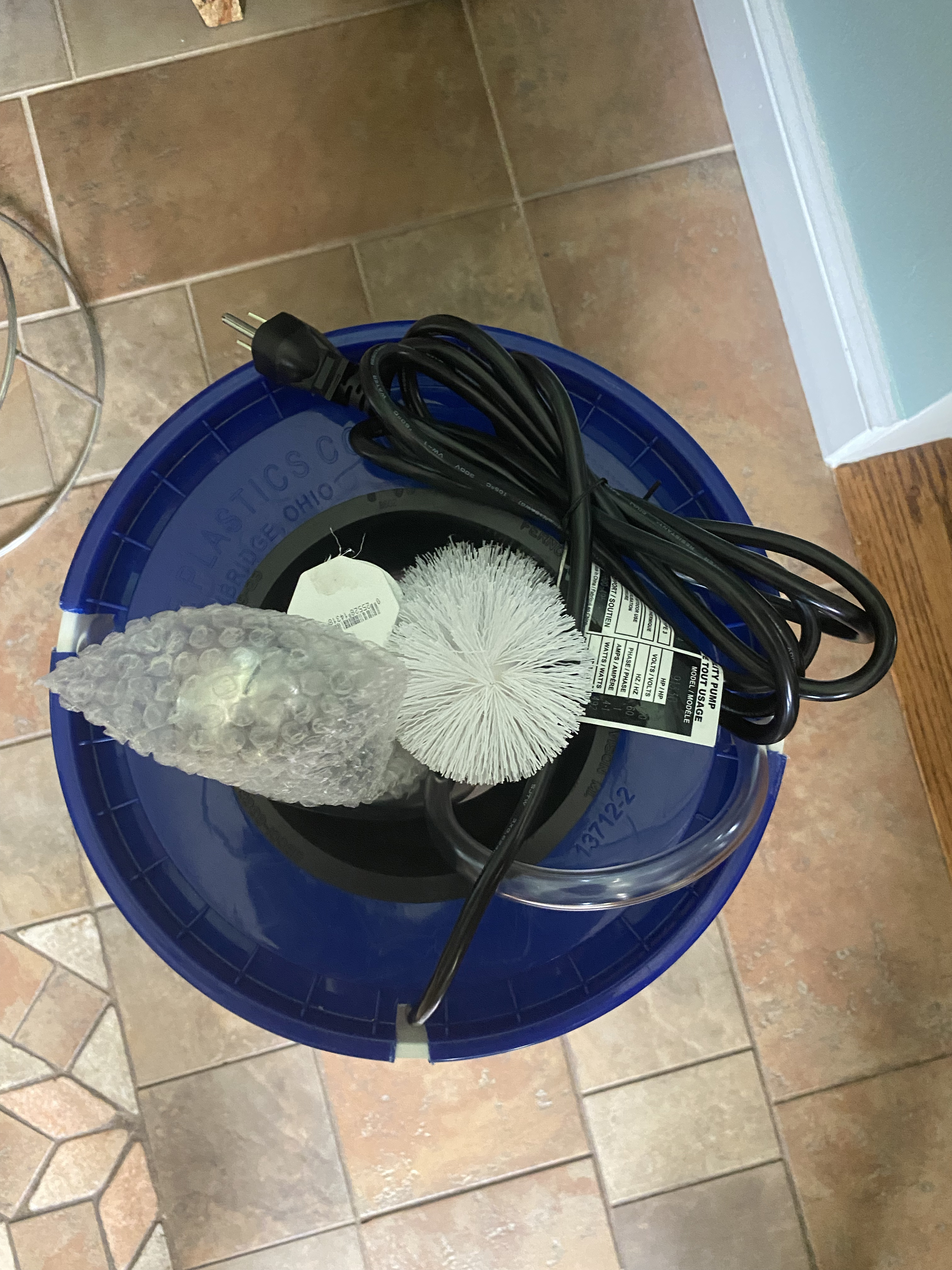 Because I had finished cleaning the kegs, I didn't have any to test the new lid with. So, I've only got this media of cleaning the FV to share. 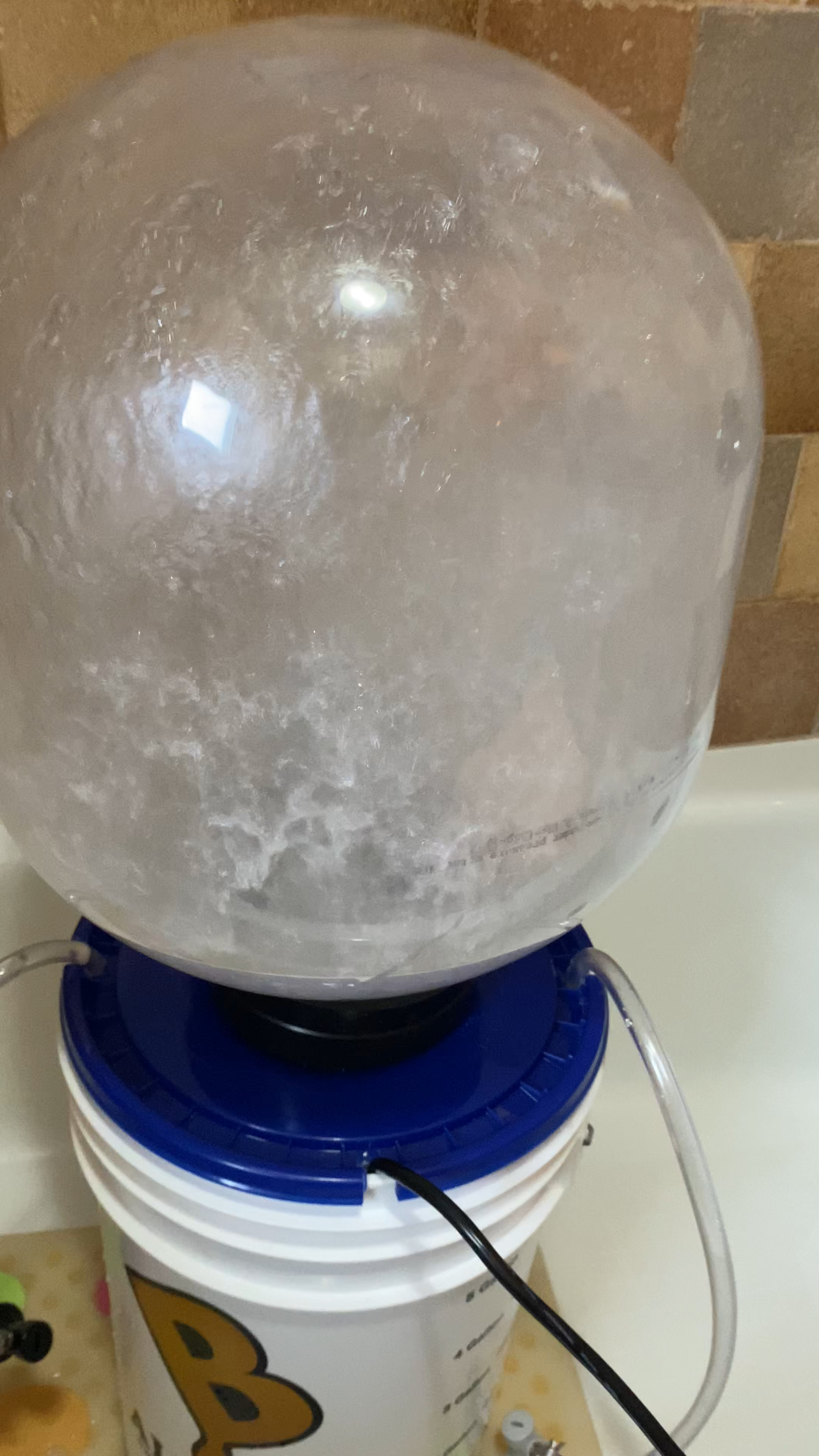 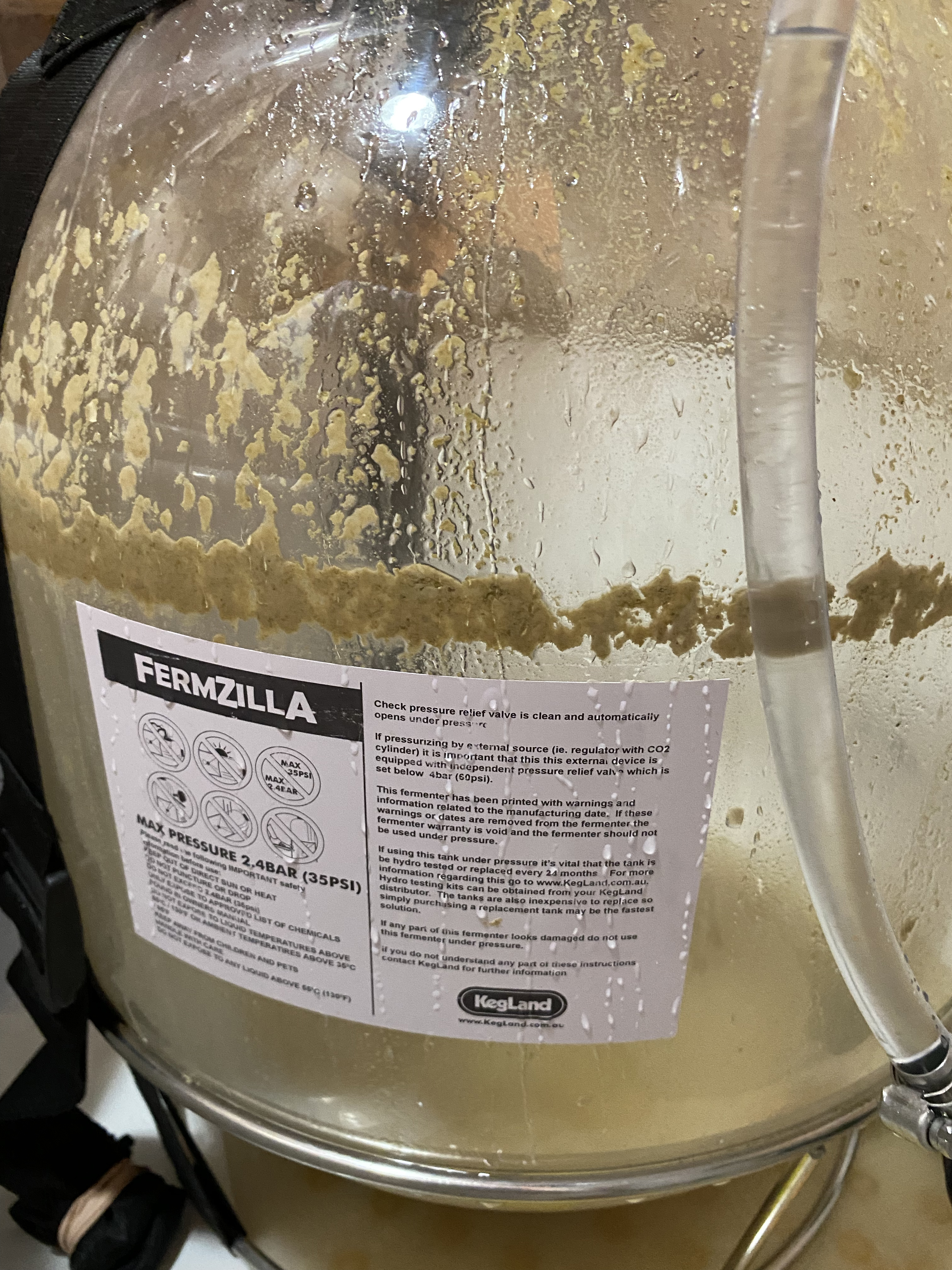 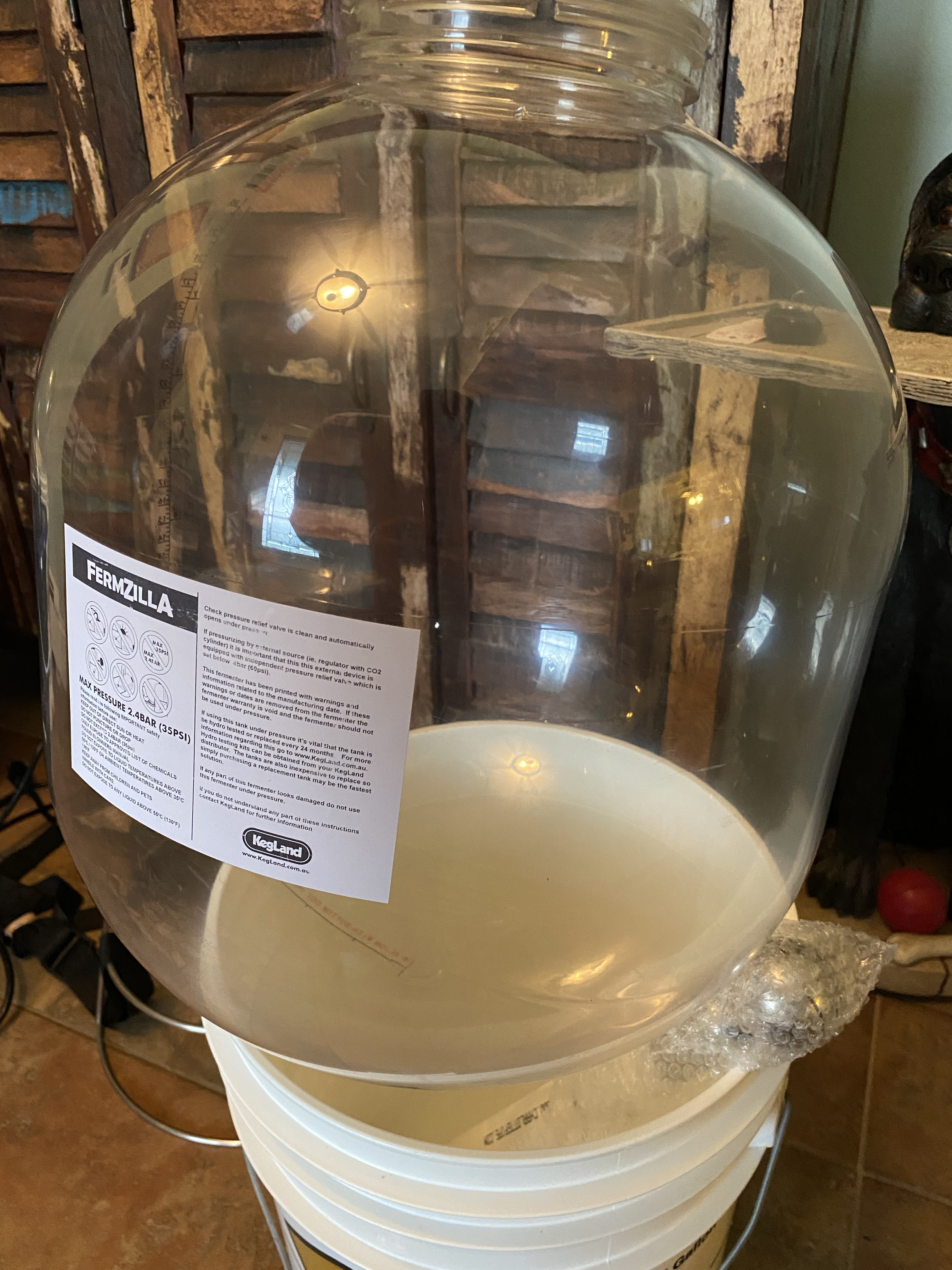 The FV mouth fits snugly within that PVC coupling. No bungee required to hold it in place.
The coupling itself is snug AF in the lid. On the second lid, we cut that opening tight.
No media shows it but those QDs were later used to clean out the posts of the FV's lid. I left the silicone hose / floating dip tube attached so the inside of it could be cleaned.
Also no media of how this works for tap and line cleaning. That is how this pump was previously employed. Now, I don't have to use a restrictive carb cap on the pump outlet to make that happen. Instead, I cap the top of the cross (see the first photo of this post) and mate one of the QDs from the cross to the first QD in the keezer. That is done using this magical part from our dude @Bobby_M

Brewhardware.com has built a solid reputation for offering the best retrofit sight glass kits available to the homebrew market with a consistent high level of customer support both pre and post sale. We feel a great sense of pride reading through all the positive reviews of our products and...
www.brewhardware.com

Plug - I purchased several other parts from brewhardware.com - for this build and other applications. Please support them. Excellent products and service.

I don't enjoy cleaning. It takes time and effort. I got tired of destroying my back. This helps with a lot of those complaints. I am debating if it's worth figuring out how to use it in the BK after brewing. Particularly in combination with the immersion chiller getting spray ball contact.

I wanted to keep this post brief and I am skipping a lot of details re: the process. But I wouldn't be able to get this done without the inspiration from @raysmithtx and @HilmBrian. And, of course, my dude The @IslandLizard helping me figure out the right parts to procure. Many thanks!

* For those who have built something like this or have a tip... how to prevent mold when putting it away after use? My method - After the Oxi and "clear water" cycles, I let the pump run dry for a moment. I really don't think that helps. I detach the center riser from the top of the cross. I blow CO2 through the QDs of the side arms. It's not terribly effective. The moisture travels up the hose toward the barbs / body of the cross. Then I stuff a dish towel into the top of the cross. Any tips are welcome!
OP
OP

The bucket lid sucks... It's not held up well with the stress of the rubber gasket / PVC coupling. The cut out for that coupling lead to a split from the center of the lid working its way to the outer edge. The lid is still usable but annoying to deal with.

So, I set out for a solution. Enter the storage tote / Rubbermaid bin. Combined with some wire rack shelving as a platform, this is what it looks like. 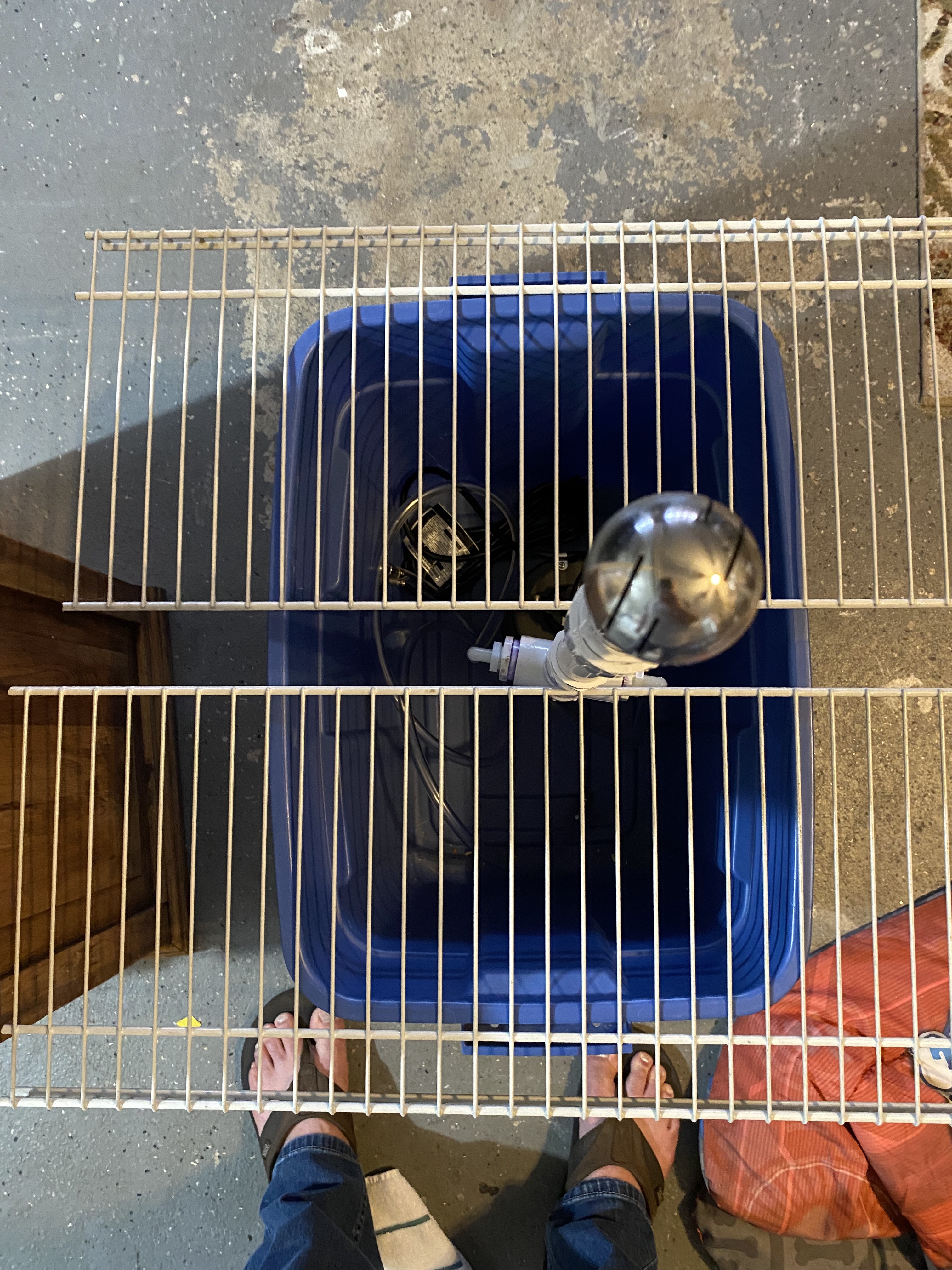 But the longest riser pipe I had produced was measured specifically with the bucket as the reservoir. Meaning - with the spray ball on that pipe, the spraying water would come close to the bottom of the keg. That's where we want the force of the spray to hit, right? I did a test measurement.

This photo demonstrates where the CIP reaches when using the original bucket as the reservoir: 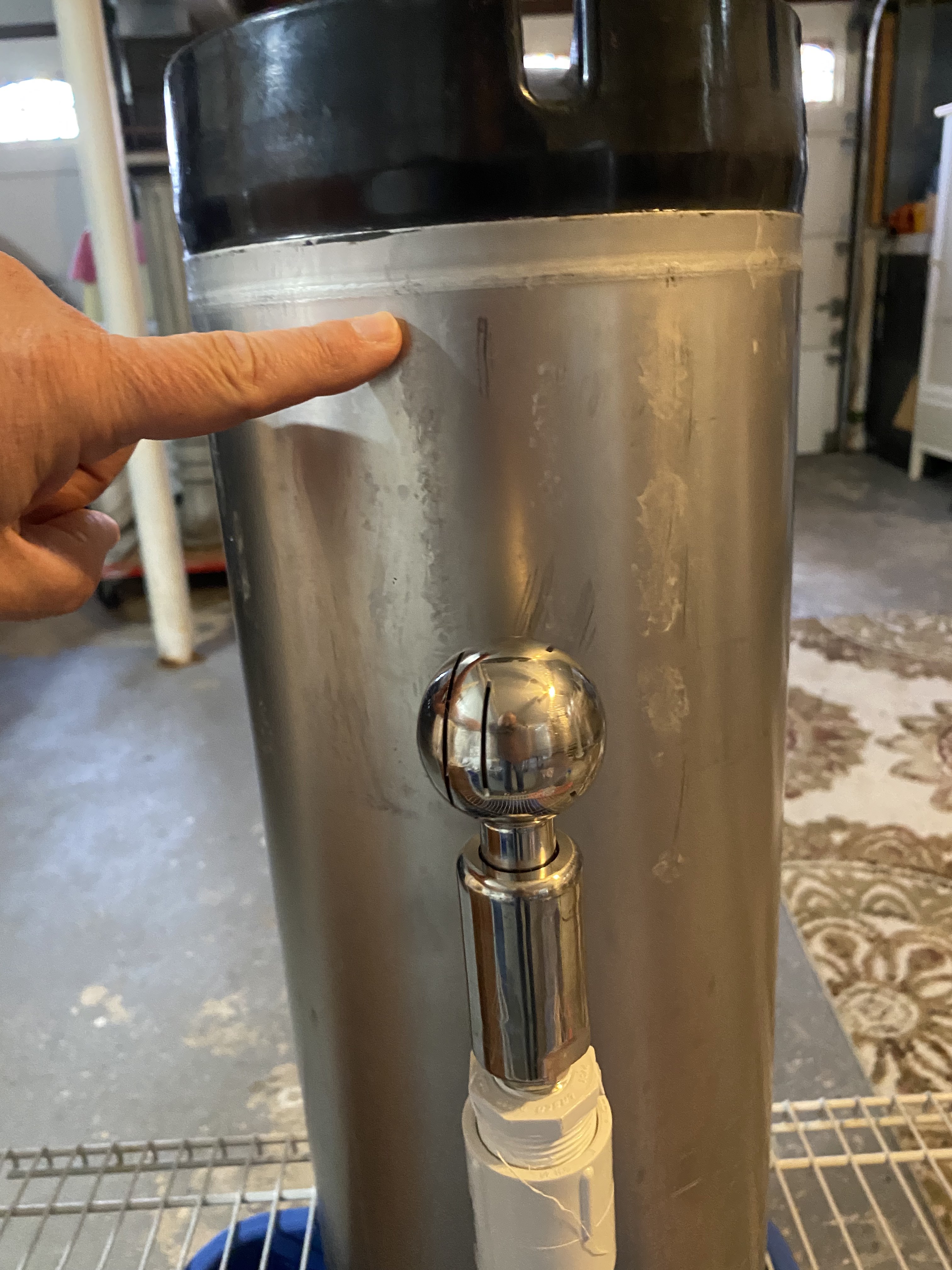 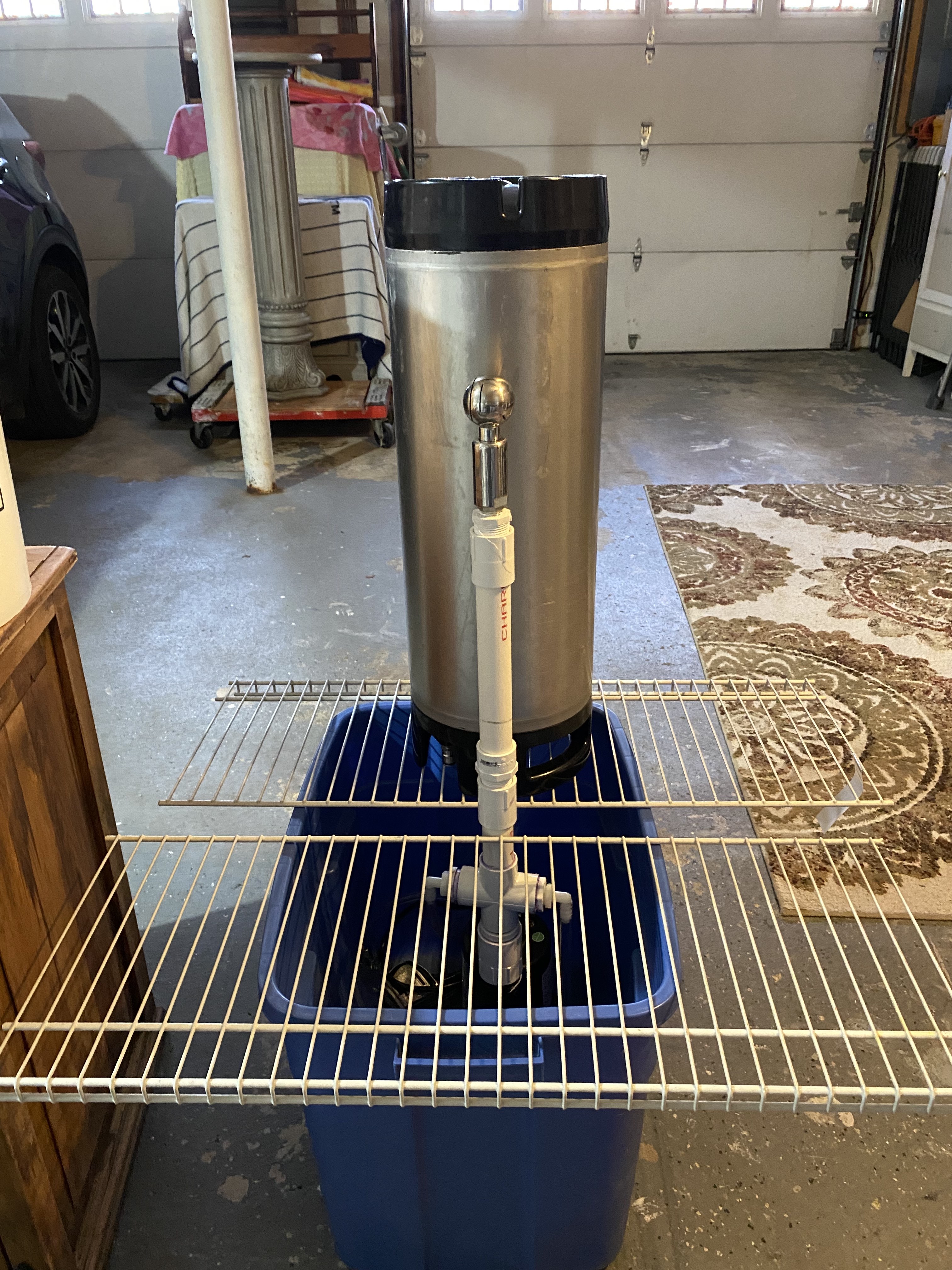 Falling short of where we care to have the CIP targeting ###...
But, when CIP is threaded onto the manifold without a riser pipe, the tote serves as a good enough reservoir to clean the FV! 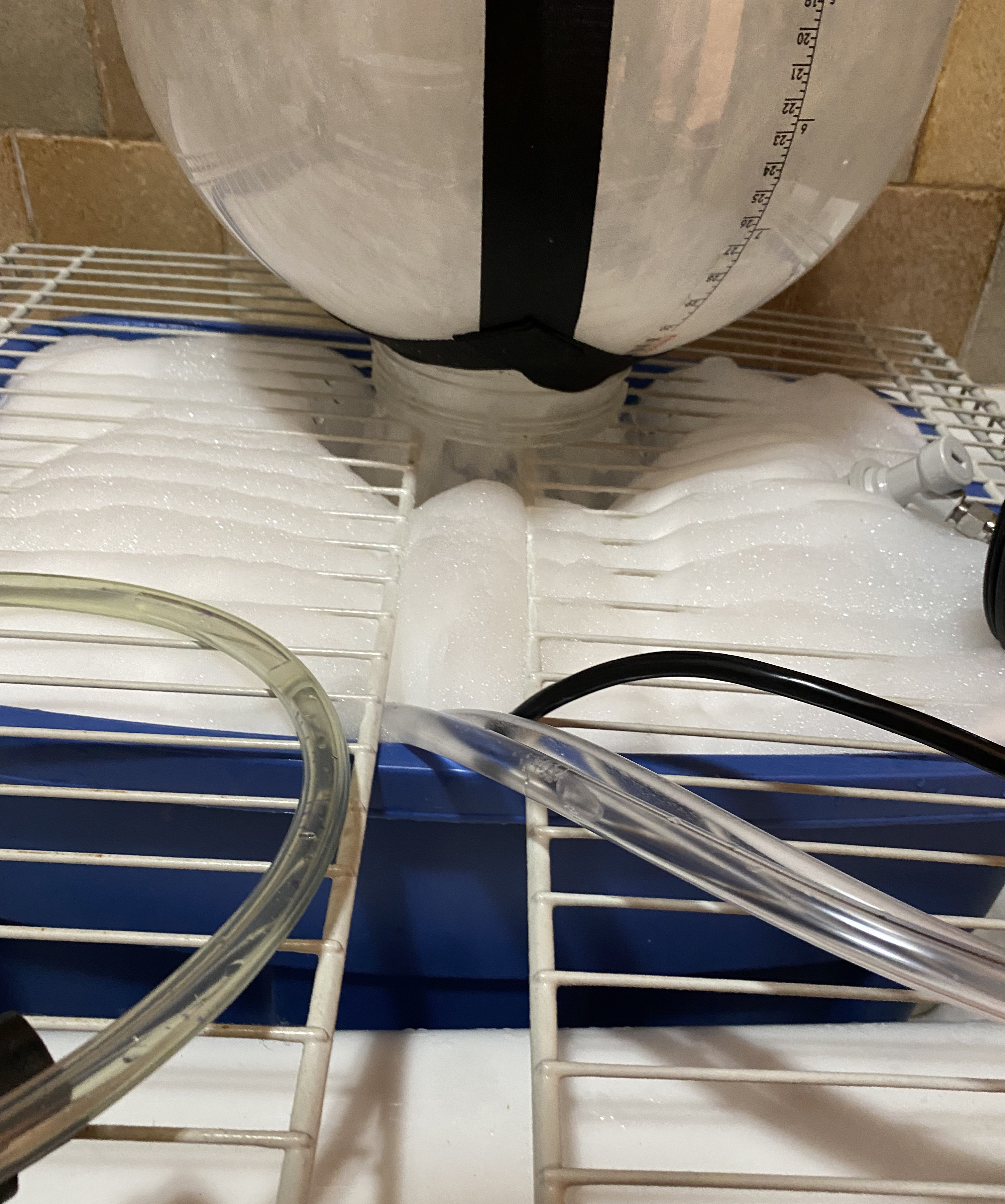 I thought the force might shoot the FV right off of the rack shelving but it stayed put.
No complex cut out to allow tubing and wire to pass through. Just route them through the void left between each rack.

Look at this photo carefully to see the FV lid resting on the shelving, a QD connected to one post allowing it to be cleaned and returning the solution back to reservoir. 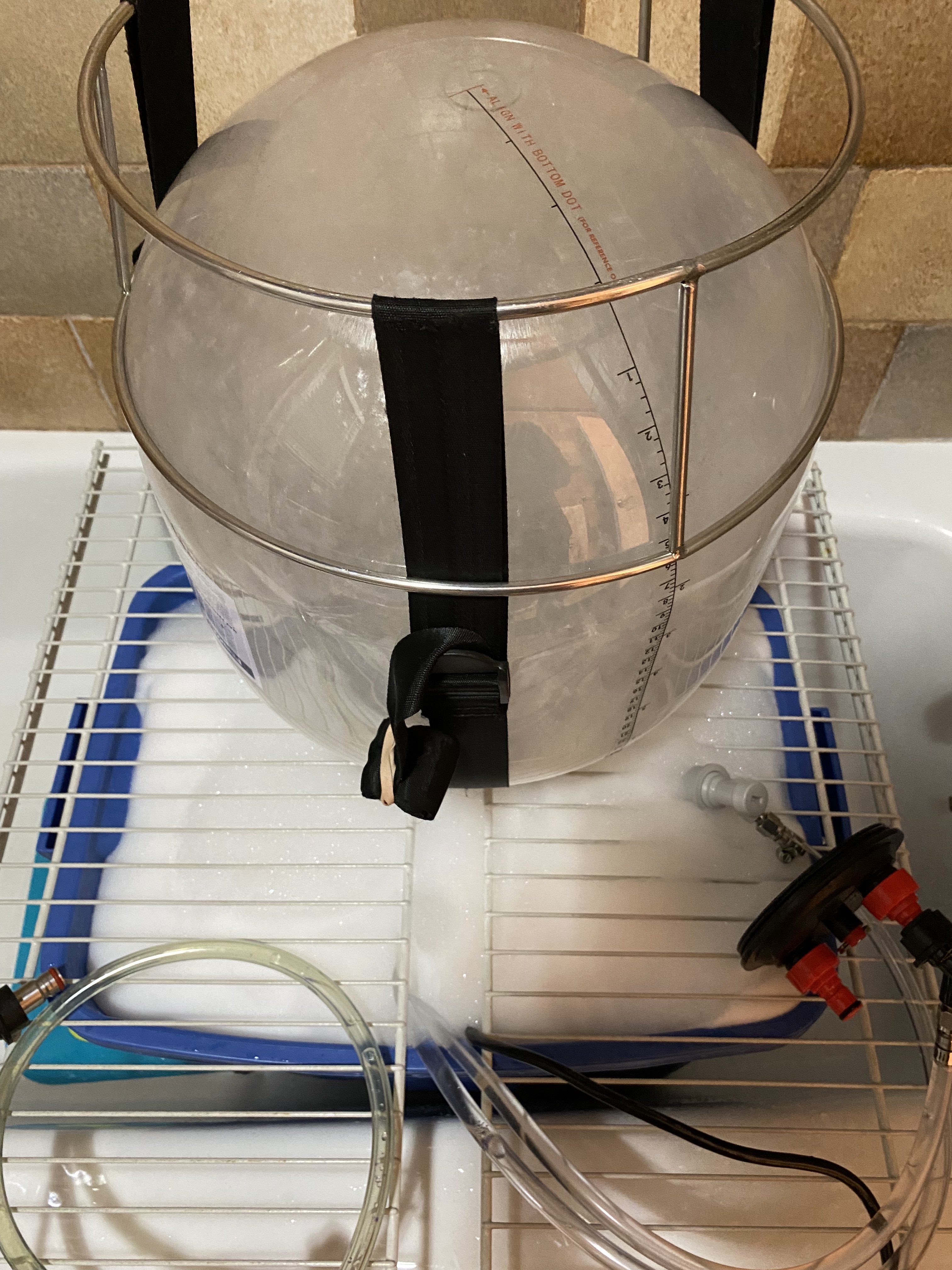 ### Ah! To my great delight, I found a pipe we had produced from the initial build. It was the longest of all that I had in possession and, when dry measured, it was going to reach close enough to the keg bottom!

Cons
- Bulky in storage. I put it in the attic with the shelving. Pump and plumbing stay in room temp closet.
- Larger reservoir...Requires more water / solution to cover the pump...
- ...adding weight and making it a chore to transport. I fill the tub with warm water inside then bring outside to do the cleaning. Note the FV videos were done in bathtub which was too tight a space to work in.

Bucket
Pros
- Smaller footprint.
- Requires less water / solution.
- Worth using for cleaning FV.
- Easier to move even with weight inside.
- I still use that same bucket to store the pump and all plumbing in when not in use.

Cons
- Not worth using for kegs. The lid is too flimsy.
- Pain in the ass to route the tubes through the lid whilst trying to prevent kinking.

Quantity isn't everything... For me, the pros outweigh the cons to use the bin instead of the bucket. For kegs, anyway. Each reservoir has their respective job. Bucket for the FV and tub for the kegs. Done!

M
Are eva 4mm ID lines too restrictive to clean 4 taps at once?

Closed transfer stuck with a gallon left in FV