And here it is put in place. Had to pull tension and add heat with a heat gun around the corners to get it to lay down flat. Had to cut a few "V" groves in the bottom half of the seal in the corners. And shocked myself by cutting a perfect edge on the ends causing them to fit together nicely. Added some super glue to the two ends in order to maintain a solid air tight seal. 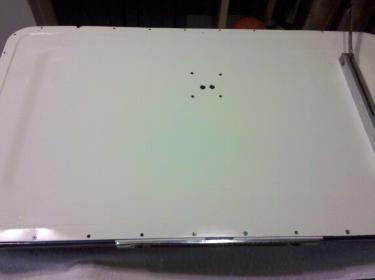 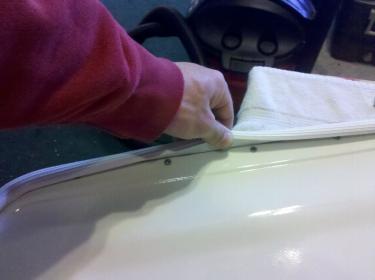 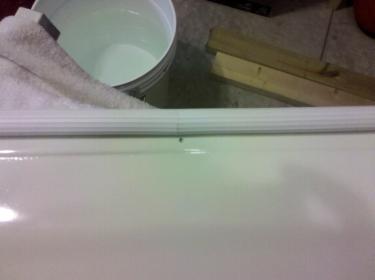 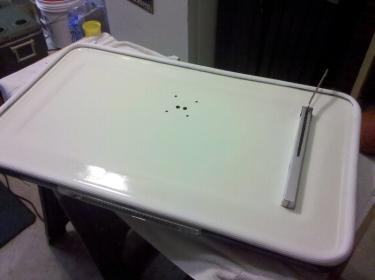 Lid and tower is back on but I have a problem. The right corner seams to not want to seat level with the rest of the corners. Need some suggestions quick on what to do to fix this. First thought is to add some stainless steal or chrome plated clasps like you would have on the front of your tool box. Any comments/ideas? 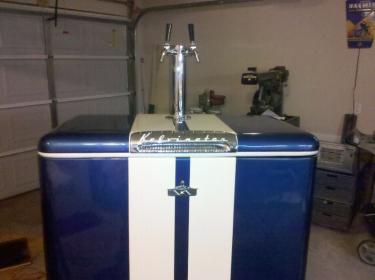 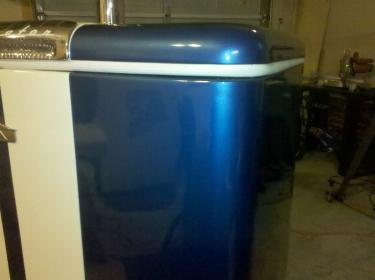 Any chance that the tension on the lid from the tower being bolted on is causing the lid to flex? Or is the support arm on the inside causing it to flex? I would check those two things first.

Unfortunately magnets are not going to be strong enough.

It has the same problem with the tensioner unbolted... I did not think of it before, but the lid had been flexed because it appeared that at one point the tensioner was removed and when the old owners opened the lid they had let it go and it bent the hinge and lid where it connected. We tried flexing it back into place as good as we could and then bondo'd the heck out of the top to make it look level. LOL, should have been my first clue that I was going to run into problems getting it to seal right on that side.

In keeping with the theme, I am going to attempt to install stainless hood pins at just the right length that when pressed firmly closed, it will hold pressure on the lid maitaining a seal. I just hate to have to drill any holes but this way I am only taking a chance at two holes that will be covered by a plate as opposed to several holes with the tool box style clasp.

I am going to use rubber shock and end link bushings shaved down to the right thickness on the inside around the pins to create and maintain an air tight seal... pray for me!! 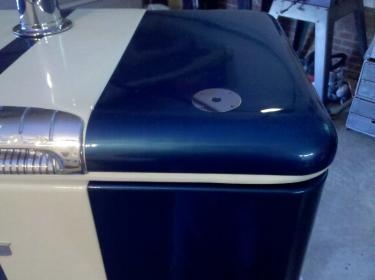 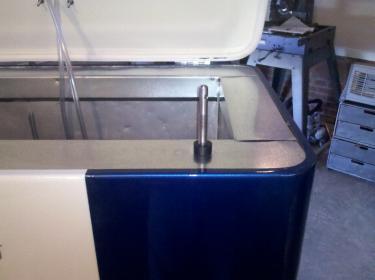 Started to attack rewiring the unit as well.... another problem and this may be a show stopper for the unveiling of this beast tomorrow and maybe even before I deploy in a couple weeks.

I was simply going to add new wire from the unit relay to the power outlet. I was investigating the wiring from the relay to the compressor and it is so dry rotted that I would not trust it to run with out supervision. I honestly do not know how the current wiring never arched and caught fire before. I could have been the reason for some of the bare wiring as we removed the relay in the very begining to see what it would take to add the new grounded plug. Just disturbing it that much could have knocked some of the dry rotted casing off the wires and I never noticed it.

I have all the wire to completly replace the wiring from the relay to the posts on the compressor but it is almost impossible to get to without taking the compressor out some and getting to the back of it. This stinks! So much more could go wrong once I start unbolting the compressor. I can not unhook the coolant lines cause I do not have that kind of money laying around to have an A/C guy come in and replace the old stuff with updated freon...

Time for a beer and to gather my thoughts!

It looks like there are bare wires back as far as the wire mount on the back left compressor stabilizer. Was told by the local appliance store to not bypass the thermostat and not to change out the old relay since it worked before with no issues. I am not very good with electricity so if anyone out there knows of someone on this site that is good at this stuff, could you please ask them to chime in with their knowledge and guidance. Thanks! 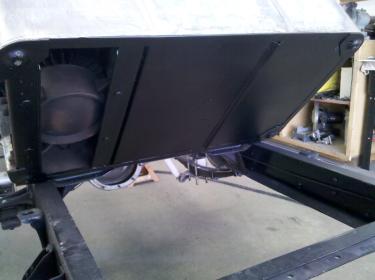 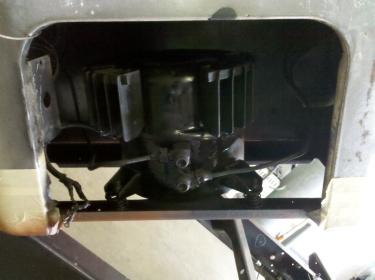 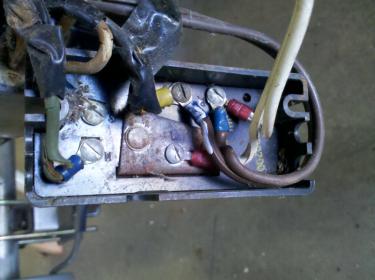 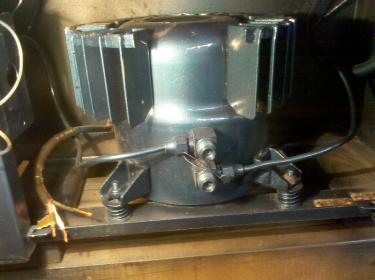 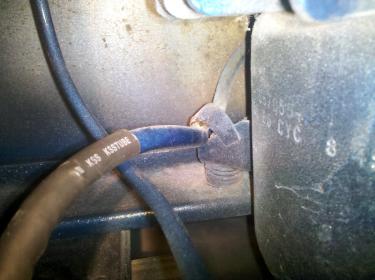 I know this is kinda a dead thread and I may have missed it... is this beat of beverage dispensing beauty running?

sorry for rezzing dead thread but this inquiring mind wants to know.

Well months after the last post of raising this dead thread we have finally got a fully finished product! With deployments and no guidance out in the real world, we sought a local expert for advice on updating all the electrical work without disturbing the compressor and its lines. So, here is the step by step break down on the electrical upgrade.

This is what the 1948 Delco regulator looks like with the main power cord, thermostat and compressor hooked up (all original).

This is a picture of what the compressor looks like from the back side.

Obviously, all the wire coatings are dry rotted and falling apart which poses a fire threat. If you have taken a project this far, replace everything you possibly can with new equipment.

Next step was to do the daring and dangerous, or costly disaster, of pulling out the compressor roughly 6" to remove the old wiring and replace with new.

When pulling the compressor out I suggest soaking the locking nuts for a few hours with Liquid Wrench to break them free. We had two bolt studs break on us but that didn't create any issues.

We did this with two bodies (four hands) allowing one person to firmly grip the compressor while the other person sat underneath the kelvinator focussing solely on the compressor lines.

While one person moved the compressor using very short slow movements, the other person slowly assisted the compressor lines keeping them from kinking up anywhere or adding unwanted stress points.

The next step was a lot more simple than expected. The wire nuts on the back of the compressor came off with ease. The wires were soldered ends looped around the studs, synched down with nuts.

I felt no need to recreate the wheel, only to refresh it and upgrade its quality. Therefore, I used a good heavy gauge wire, soldered and looped the ends. The color diagram looking at the back of the compressor from left to right is "green, white, then black".

Now that the new wiring is attached to the compressor, slowly put it back into place on the springs and studs. Do not tighten the compressor down, it is designed to rest and move freely on the four springs it sits on.

The old power supply was a white two prong cord. We replaced this with a three prong adding the ground.

The black and white power supply was added and green ground went the the body.

The old brown wire was the original thermostat. We bypassed this because we used a digital Johnson thermostat.

The opposite end of the compressor wire was then attached as seen above.

The relay and new wiring was then put back into place finishing this off.

After plugging it in for the first time in 6 years, it took about 24 hours to get to a comfortable resting temp of 40°. The Kelvinator now has two fresh brews crashing and carbonating. I can not wait to pull the first draw off this beast!

That thing is amazing! Just read through the whole thread...really impressed with how much work you put into it. Any idea of your total hours? Total dollars?

I have no idea. Bought this back in 2008. Never got the courage to tackle this project until 2011. But as soon as I started pulling it apart, I realized I was getting into something a lot bigger than initially planned.

Man hours would be difficult to compute. My best answer to that would be, "who cares? I am finally done!" Ha ha ha....

Two different appraisals were given for its current worth. The first one was from an antique appliance dealer for $7,500. The second was from a local collector for $10,000. I asked him why his was so much higher and he said that they probably didn't account for a simple little original seal tag (that I never noticed) that shows the compressor lines have never been removed.

I doubt it is worth that much more just because of an original seal. I would guess that the first appraisal would be more realistic.

It's apparent to me that you built this just for you, 100% custom. Hard to put a price on that. After so many hours and years, even $10k would make it hard to part.


But if I showed up at your door tomorrow with $10k cash and a bunch of homebrew, could I take it home with me?

Possibly, but probably not. It would most definitely depend on how it all went down.

A keg of your beer later and ten K sitting on the dining room table, I can not guarantee my actions at that point. Lol

But I still think it would be hard to ever let this one go! You could always come visit Fayetteville and give it a good college try though!!
M

I was just given one of these exact same Kelvinator freezers this weekend. I took it off the hands of someone with the intention of using it as a lagering chamber to keep it out of the scrap yard. I love the look of this freezer and its the perfect size. Perhaps someday down the road, it might become a Kegerator.