Show us your Kegerator

If that is Celcius, your beer is going to be a little warm.

I'm finally able to contribute to this. Just a basic 4 tap system but got them all filled and in the fridge last night. Perlicks will come soon enough... 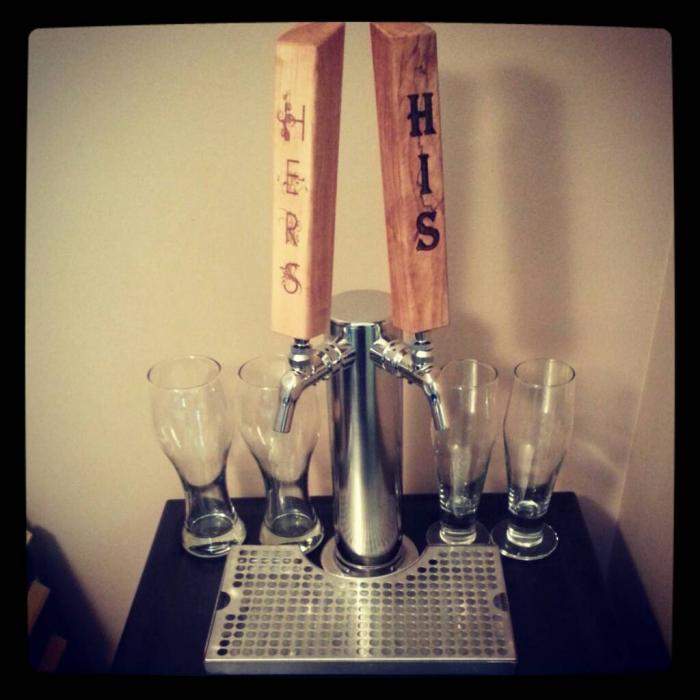 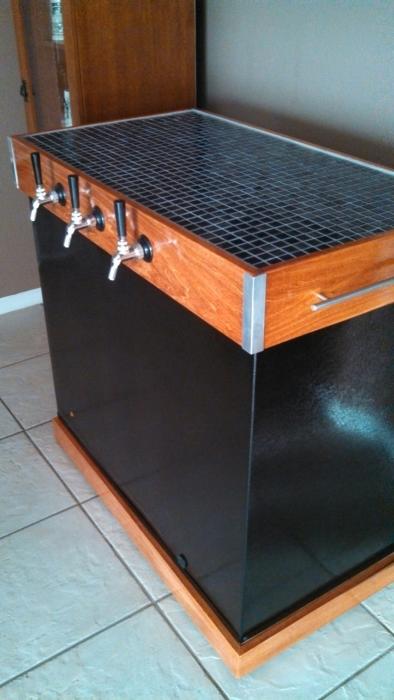 Hello folks, I finished my basement and built a bar down there. To conserve space and to be closer to my brewing area, I wanted to have my keezer in the unfinished portion of my basement--50'feet away from the faucet. I ran the beer lines through a loop of 3" PVC which goes from the keezer, to the faucet, and back to the keezer--100 feet in total. The beer lines run through one side of the PVC to the faucet and there is a radon mitigation fan on the other side blowing into the keezer which causes cold air to be sucked in the other end containing the lines. Due to compressor workload, I only run the fan while the party is on. I plumbed the lines to the tap water supply so that I can push the beer back into the keg when the party is over, keeping it fresh until next time. To carefully control the rate of push back so that no water enters the keg, I installed several valves. An effective, cheaper alternative method to glycol. The beer stays cold at the faucet while pouring, however, I am in the process of designing a chilling system which will sit at the end of the lines by the faucet. I planing on using 3 peltier plates attached to a cold plate. Have a look.

Note: only one of my 3 lines is currently plumbed--the others will come soon. Also, the cheap party pourer was used only for testing purposes. My beer tower will come soon.

I'm interested in hearing more about the use of a Peltier unit, do you have a thread for that?
F

I will post more information on the pelters once I get my cold plate chiller built. I can tell you that I brought one plate to work so I could test it's draw. At 12 volts it's pulling 6 amps. I have a 430watt computer power supply that I will use to power 3 of these since it's capable of pushing out 20 amps at 12 volts. This is definitely not something you want to run 24/7 for sake of your utility bill. 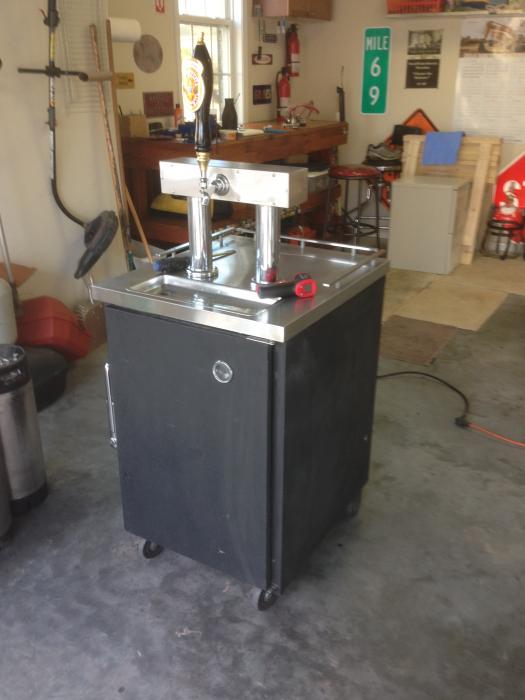 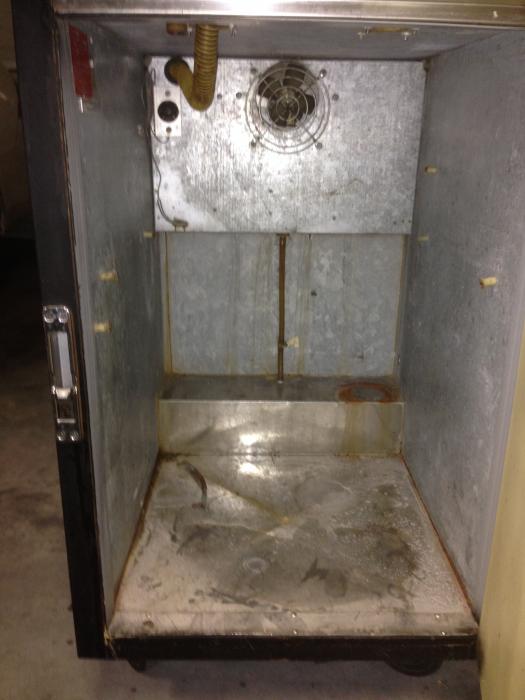 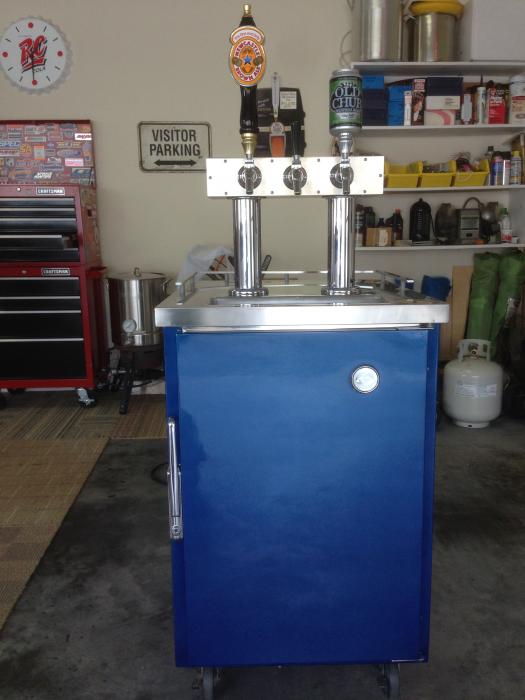 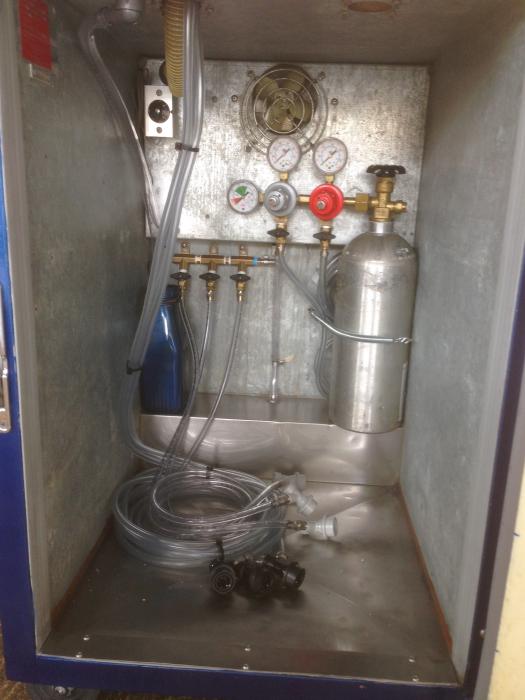 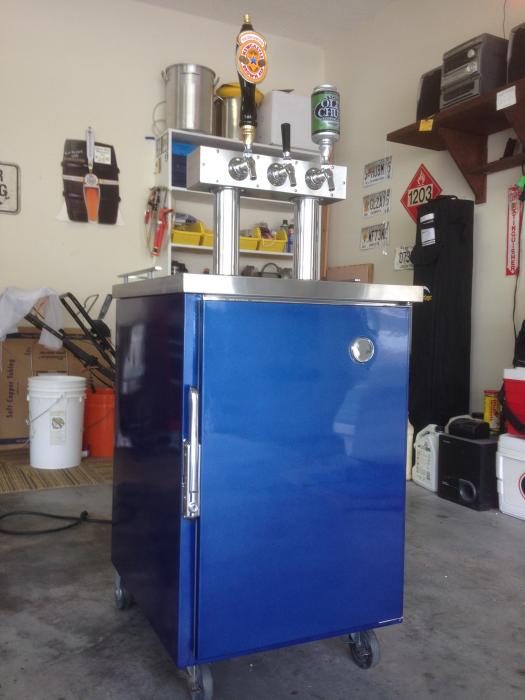 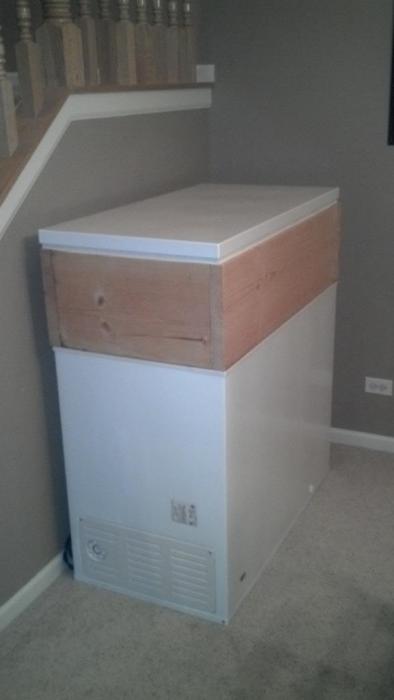 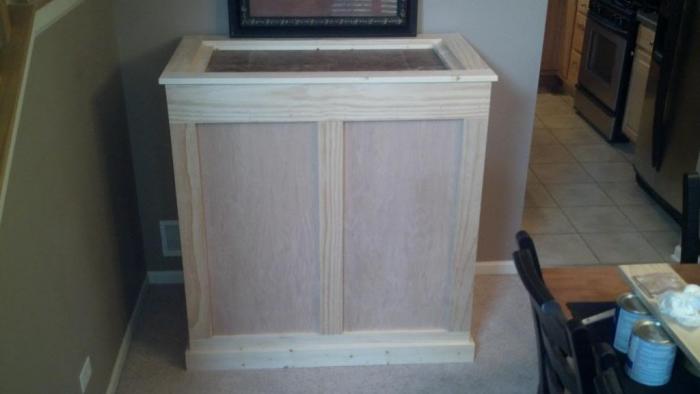 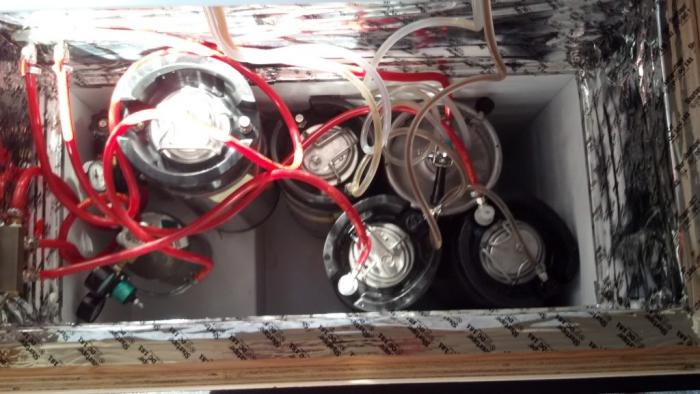 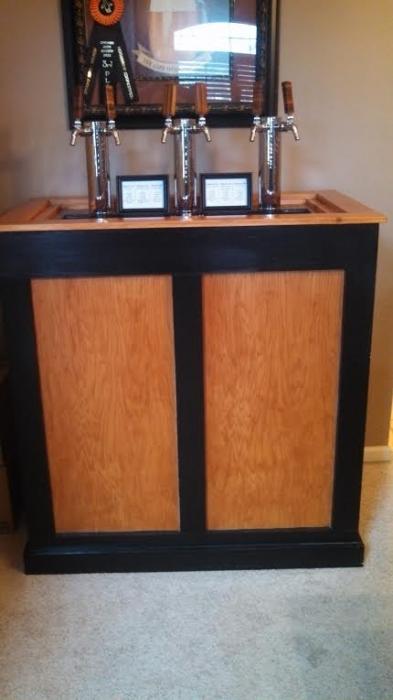 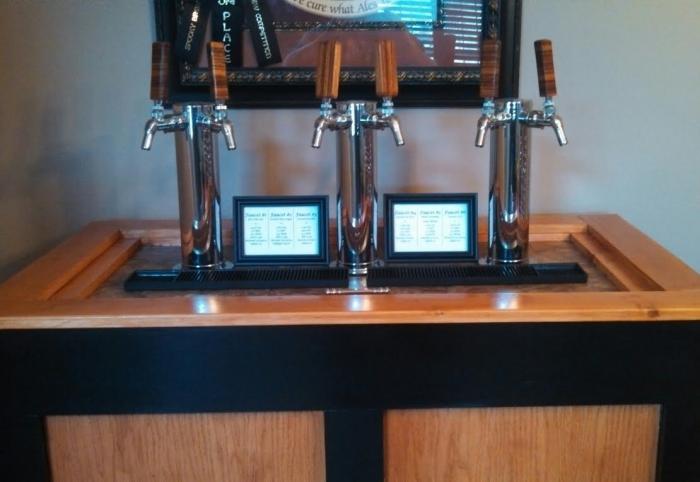 This is my work in progress. I had the fridge in the garage, and was tired of things freezing, with such a cold winter this year. So I moved it into the dining room, and need to make it look like something other than a 1997 Whirlpool. The doors are from a old boat I had, they covered the cuddy cabin, I was looking for a use for them, everything else was left over stuff I had, the sides are left over hard wood flooring. 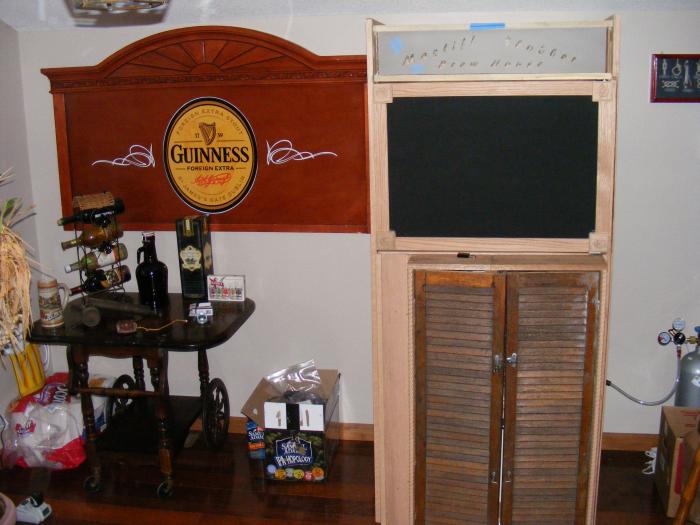 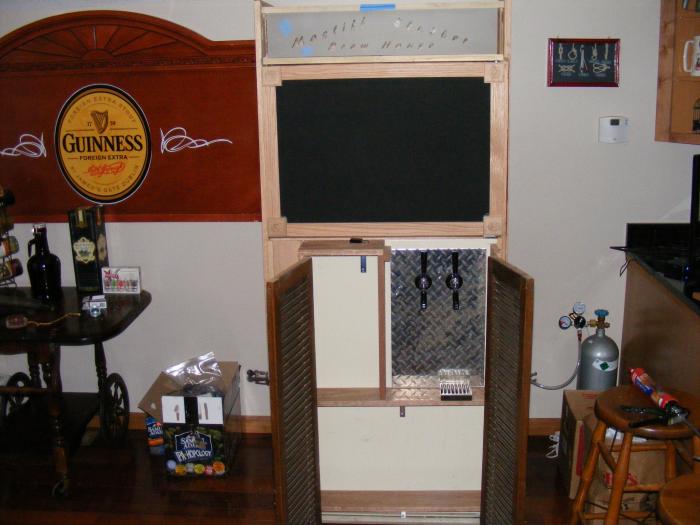 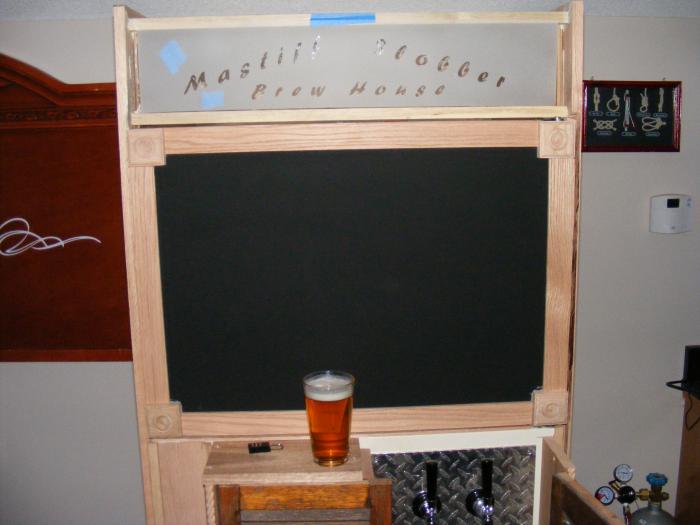 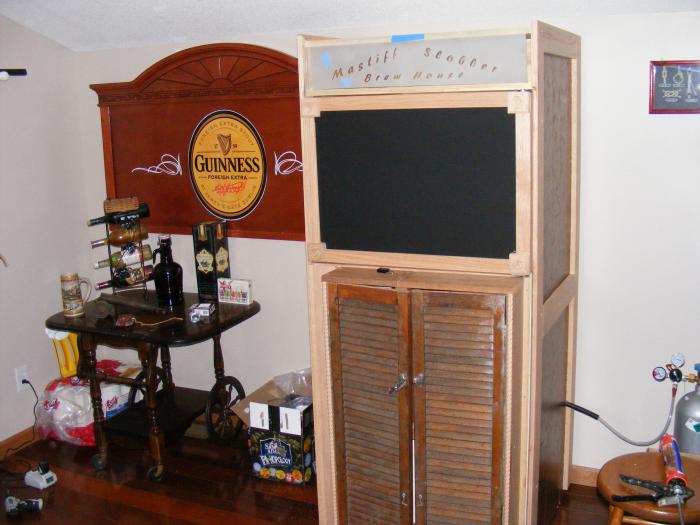 Here's mine. Cleaning kegs for some IPAs right now

Buford said:
New pics of mine, now that it's in use: 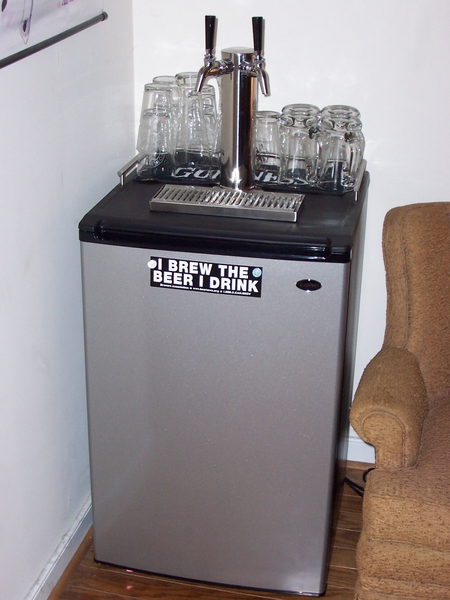 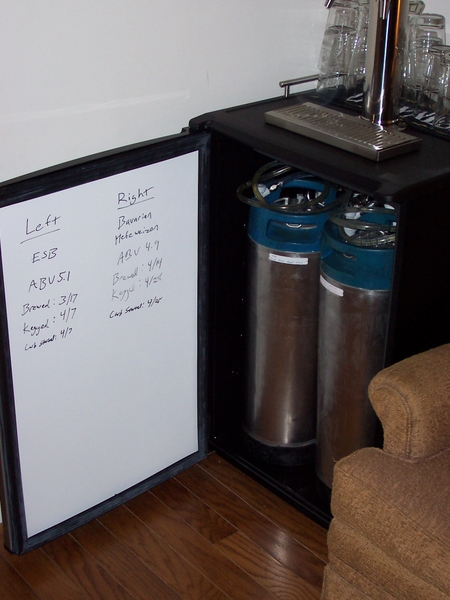 And with a glass of all-grain hefe, currently on the right tap: 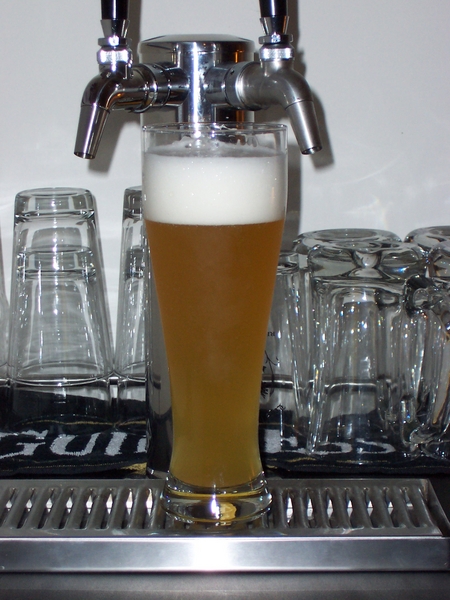 What fridge brand and model did you use. There seems to be lots of room inside

Here is mine with custom tap handles and all.

Close up of the tap handles and the custom swirled stainless steel plate I made.

Here is my through the wall keezer

Here it is with small bottle fridge on top 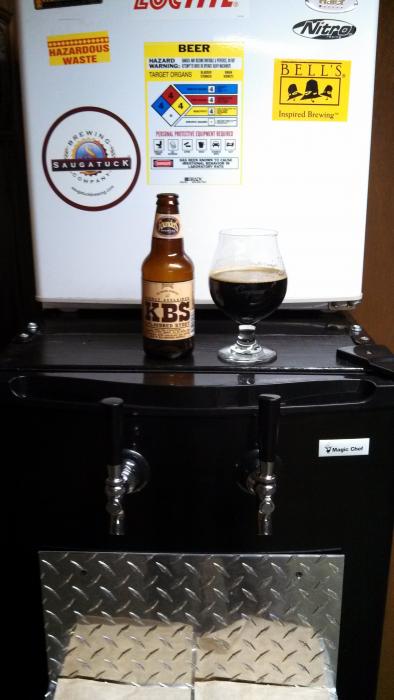 Here's mine. Just built the tower in the past 2 weeks; formerly needed to open the door and pour off a picnic tap 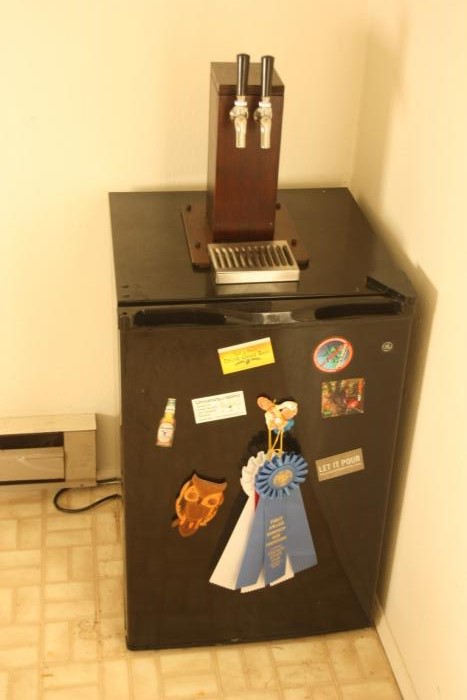 I don't think I have ever posted mine.

Someday my wife will let me run my beer taps through the wall; I'll call it my glory hole!

This is what it looks like after tons of help from some family this weekend I suck at building things with wood so needed the help. Built a 2x8 wooden frame for the inside and then faced it with a 1x10. Made slots for the shelf brackets in the back of the 1x10 so you wouldnt see it on the front. 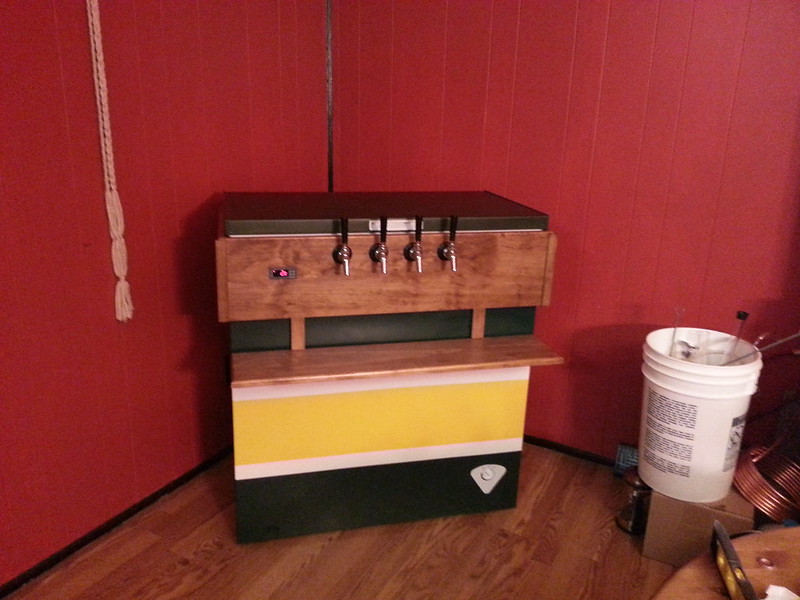 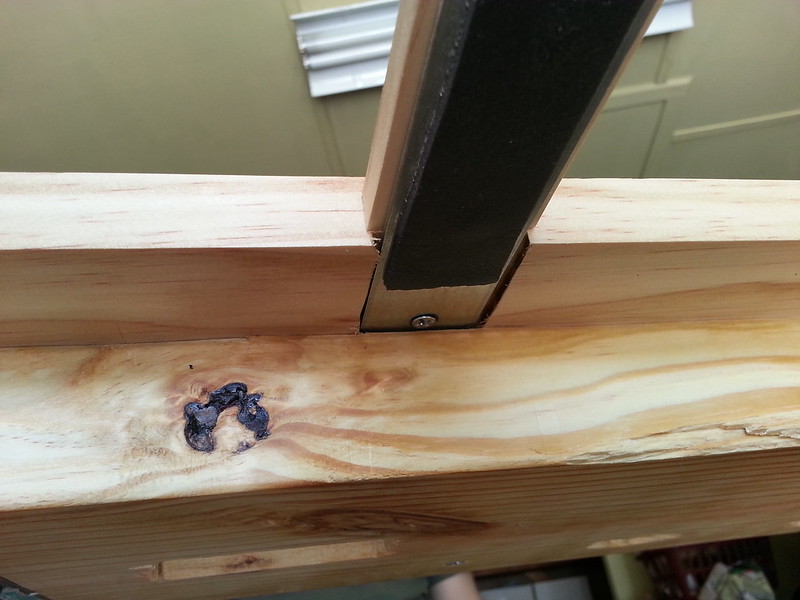 After that it needed 1 more touch that I forgot I bought years ago that works perfect for this. 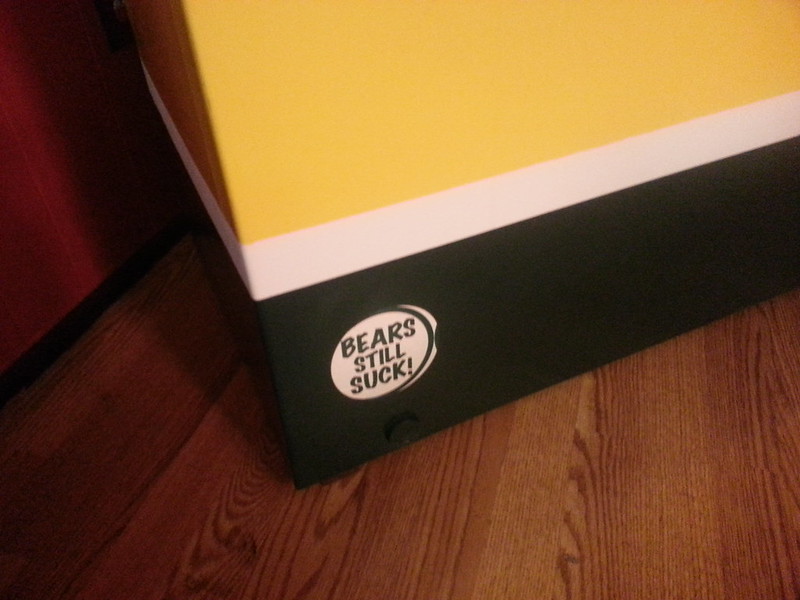 Next Im gonna get a vinyl cut that says "PACKERS" for in the yellow stripe, a Packers bottle opener for the right of the collar and it should be done.

Going to start work on mine here in a few weeks!!!

Did a sketch up 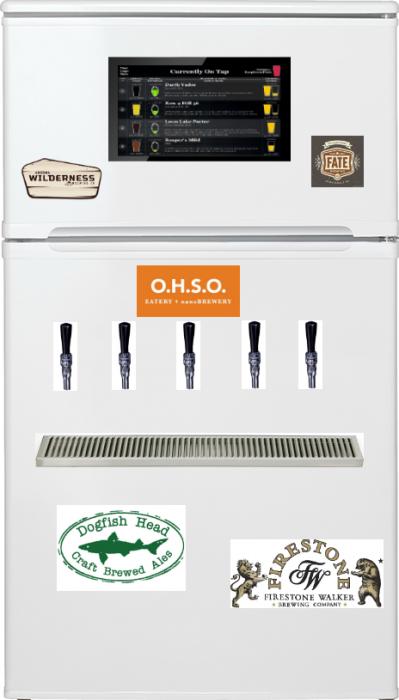 What happens if you pull the rope?
Y

masonsjax said:
What happens if you pull the rope?
Click to expand...

Its a 1:1,000,000 chance a naked stripper pops out of the keezer. Still havent hit the lucky pull though

YoKramer said:
Its a 1:1,000,000 chance a naked stripper pops out of the keezer. Still havent hit the lucky pull though
Click to expand...

amfukuda said:
I need to install that feature and you give me the plans you used


Sent from my iPhone using Home Brew
Click to expand...

If you use the same plans does it cut the odds in half? I want a copy

raymadigan said:
If you use the same plans does it cut the odds in half? I want a copy

amfukuda said:
I need to install that feature and you give me the plans you used


Sent from my iPhone using Home Brew
Click to expand...

raymadigan said:
If you use the same plans does it cut the odds in half? I want a copy

Sadly Chuck has it right. The more people with the plans the worse the odds get

I always thought the poison probability was undefined in the field of Keiser Mechanic.

Nothing special, or pretty, but I just finished my first kegerator conversion this past sunday on a free fridge that works perfectly.

I plan to just slap on a magnetic dry erase board to lable what's in there for now.

Wow, that's like popping the hood and seeing a shiny 454 under the hood. Nice hardware.

I have been working on this for over a year. I started with a single faucet, and added the fourth one this last weekend. I also upgraded to a four-way regulator and also added the drip tray and front facade.

I am very happy with how it has turned out. The freezer has room for a total of five kegs, and I am planning on putting in a nitro faucet on the far right side. 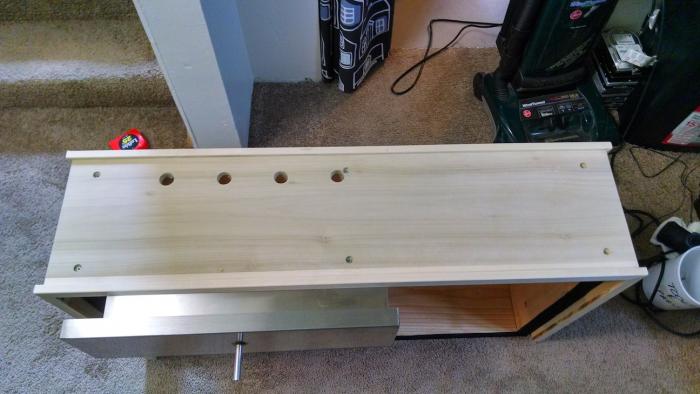 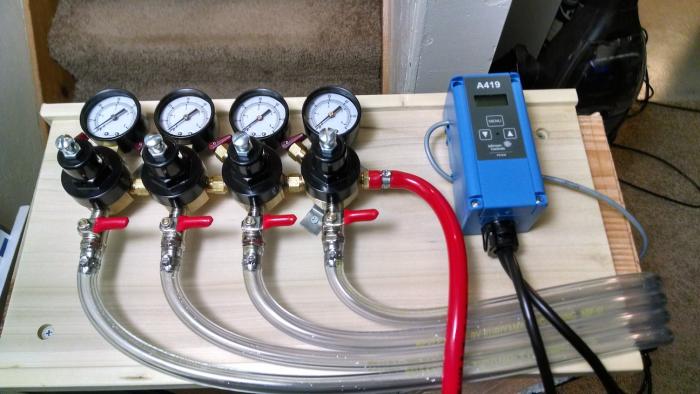 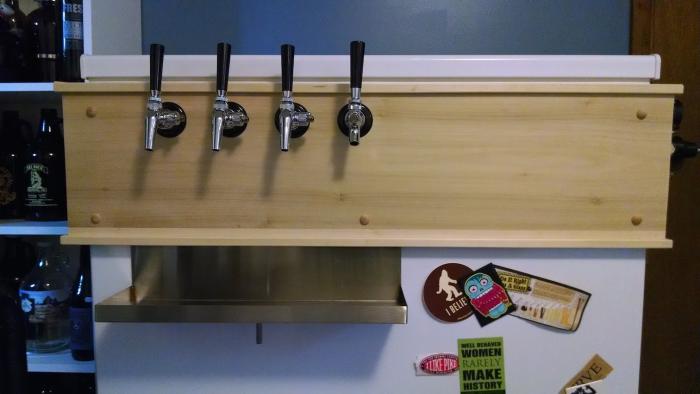 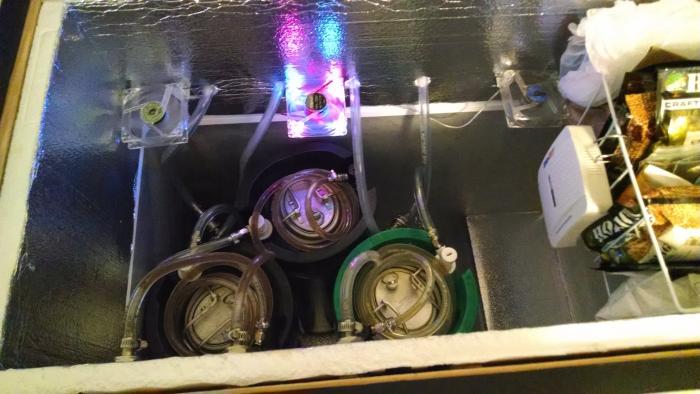 Show us your regulator setup!

Show us your Beer Cellar!