So, I've been reusing brewing yeast in one way or another for quite a few years. Like most other things in brewing, I'm generally always examining my processes and procedures to both improve them and streamline them whenever possible. After starting out with direct pitching onto a previous yeast cake to washing/refrigerating harvested yeast to slanting and freezing samples for later propagation, I've had some successes and a few less than stellar outcomes. The key to success in any batch of course is having healthy yeast in adequate volume, and that usually involves starters, step-up starters, and/or vitality starters. And they require good wort, which is at the root of my question for all you wranglers. What do you use for wort?

The most popular source seems to be 1.040 SG wort from DME. The latest methodology I'm using depends on what I'm attempting to use the propagated yeast for. If it's a starter for overbuild from a freshly purchased yeast it's pretty simple: pitch the vial or packet into a flask 1.040 wort (1L for ales, 2L for lagers and big ales) and let it spin, pitching it hopefully at or near high Krausen. If it's an old cake stored under beer from a batch or a revived sample from a slant or freezing, I'll put 30ml~50ml (if I can get that much) dense slurry into 200ml of 1.020 wort, and set it aside for 4~5 days to see if it starts to visibly propagate (it always seems to come around). If it does and doesn't smell bad or have off colored splotches, it gets dumped into 750ml of fresh 1.040 wort and spun on the stir plate for 48~72 hours, then crashed for a day or two to allow most of the yeast to settle. After decanting most of the excess liquid it gets poured into a larger flask with 1½~2L fresh 1.040 wort and spun some more for 48~72 hours. This will usually yield between 100~300ml of clean, dense slurry after crashing which, if the pitch calculators are anywhere near accurate, must be at least a cell count of 200B+. If in doubt, or when pitching for a lager or >1.065 OG beer, I'll do another 1½~2L step to give it another growth cycle and hopefully higher cell count. So far, everything seems to be according to Hoyle, or at least in compliance with "best practices" opinions from what I've read or heard from other forumites here.

A problem arises with the need for so much wort, specifically, the kind of wort that doesn't directly produce drinkable beer in the keg. For the past 4 or 5 years I've made unhopped starter worts with Pilsen Light DME in 3 gallon batches, poured them into 1 quart Mason jars and pressure canned them. They're sterile and shelf stable for a year or more. It's a 5 to 6 hour chore to produce a case. Two cases usually gets me through 1 year of brewing if I judiciously direct pitch some batches from harvested yeast slurries. For a number of reasons I haven't gotten around to making more, except for a quick batch of 6 jars, since I ran out at the end of last summer. For that quick batch I just put DME into the jars, filled with sterile boiled water, and then pressure canned at 1 bar for :10 minutes. This method was a little faster and required less cleanup, but produced more trub-type hot break in the jars. The trub settles out after a week or so, and I decant clear wort into the Erlenmeyer flasks before propagating. I get "some" break/trub even when I boil DME with water before canning, but not nearly as much. There's even a tiny bit of it in starters made with Propper, but that stuff gets expensive quickly at $3-$4 per can. I could make starter wort on a per batch basis, but then I'd just be multiplying the pain of making a separate wort by a factor of 12. I really like the convenience of just grabbing a vacuum sealed jar of sterile wort from my pantry shelf.

Limited amounts of solid precipitates in wort can be beneficial, I know, but how much is too much? Wouldn't a pinch of DAP or other yeast boosters be better than trub to supply nutrients? It's a lot easier to separate clean yeast samples for slanting and freezing from trub-free step-up starters, and less trub in a sample means more viable cells per unit volume of slurry. What steps do you yeast wranglers follow when you make starters? Lookin' for ideas to improve my process.

Cleaning and sanitation are key.

I have used clean tap water and table sugar with dry yeast to make a quasi-starter. I'm not a purist.

I have also used un-hopped wort, and also DME. I have pitched dry yeast into the carboy.

I applaud your effort, but I think you could simplify the process and free up storage space.

I have a friend who used to warn me about over-pitch and under-pitch.

I think fermenting temps and getting the right mash temps matter much more.

It is nice to see a healthy quasi-starter take off and start making bubbles in a matter of hours though.

Fermentor Experiment - with one yeast substitution

I usually brew higher gravity beers and smaller batches. My Boddington's Bitter is taking up three of my four 5 gallon HDPE buckets. I don't have enough fermentor space. A just boiled another batch Scalded Dog (Two Hearted clone) at 16-1/2 gallons. I am going to improvise. -(1) 5 gallon... 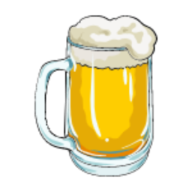 This thread shows pictures of my incubation in Ball jars.