Yeast as a laxative??

I have just bottled my 3rd extract batch of beer. The first two were awesome but this batch has a different attitude. After I drink one of these porters I immediately have to go p00p(3 attempts at drinking this beer!). There is 1/8th inch of yeast on the bottom of the bottle which is way more than the last two batches.

Question #1: Is the yeast whats causing the bowel movement?

This was Muntons Ale Yeast which floculated very quickly..done bubbling after one day. Whereas the Nottingham Ale yeast I used on the last two batches Bubbled for three days

Question #2: Is rapid flocculation better than slow & consistent. Can this attribute to the mad dashes to the restroom?

Thanks in advance.
C

That is wierd. Rapid flocculation does not equal "rapid poop deployment"

Are you pouring the yeast from the bottom into your glass?
OP
OP
S

Soulive said:
Are you pouring the yeast from the bottom into your glass?
Click to expand...

No I normally leave 1/4" in the bottom of the bottle but with this batch I am leaving 1" cause I can see It swirling its way towards my glass...I do not drink yeast...Just wish I knew what was going on. I actually have a holiday ale right behind this batch using the same yeast. I checked a bottle last night & it has the same amount of yeast settled in the bottom....I used muntons ale yeast with that batch also...
C

I drink Tons of yeast and have not had any excessive poop flying out.

Yeast is good for you. Maybe that is your problem. Too much beer and not enough yeast provided vitamins in your diet.

Cut down on the fast food when you drink too.
B

That's weird. Did you use any specialty grains?

have you been washing the beers down with exlax? It wouldn't be from the yeast, though I'm not sure if an infected batch could contribute to your excessive pooping. Are there any funky or off flavors to the brew?

Hmmm... this is weird. I couldn't tell you how many bottles of home brew I'd downed (including the yeast). At worst I'd end up with Rhino farts.

Your body was just doing an adjustment. It could have been bad food or just the time for this to happen. I have had this happen before and could not have a beer for 4 days due to the gas. Whew!! Don't be afraid of the yeast though.

My garage is the greatest laxative I've ever experienced. Every time I go out there I have to turn around withing ten minutes to lay waste. Maybe it's because I go out after eating, or it's the first bit of activity for the day, or something else, but it's damned annoying. Do you engage in any special activity when you have your porter? Do you drink it as a dessert after meals?

Did you add any brewing salts to the beer? Gypsum is a laxative in excessive amounts. Your local water supply may have enough in it already that if you add it to your brew you are getting to that poop threshold.

I think you need a test subject, send me some brew and I will tell you if I have to run to make a rapid deposit. :rockin:

I'm not ruling out the yeast being the culprit, buuut I drank some unfiltered Porter not that long ago. My growler ended up with a healthy slug of yeast in it and I didn't get the runs. Maybe it just didn't hit me the same way...

I am sure quite a few of you have had a Rogue Imperial IPA that comes in the 22oz ceramic bottle. After the first pint, there is only a couple mouthfuls left and a whole lotta yeast. Every time i drink one and swmbo is around i pour the last of it, including the yeast into the glass and chug it down because it grosses her out. The only affect to my body is the most ultimate farts one can imagine, which can be a funny thing the next day at work when i clear the room or blame it on someone else (which i am a master at) :rockin:
S

Someone needs to Photochop this pic for this thread...

SixFoFalcon said:
Someone needs to Photochop this pic for this thread... 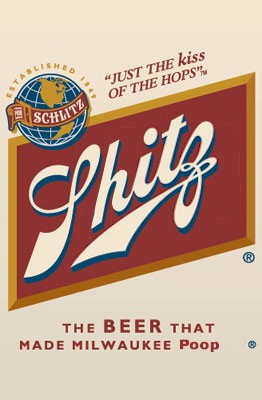 Why did I spend so much time on this...? 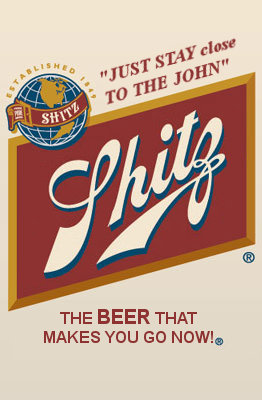 I've heard similar info about yeast being a natural laxative - it's even mentioned in John Palmer's "How to Brew", and that seems to be considered the homebrewing bible... so the general opinion here is that it's not true? Or at least not significant to worry about?

Drinking a porter, eh? I hear that having to poop after having some of the Edmund Fitzgerald is a common side effect. Don't worry, it'll pass soon enough once your body gets used to it.

jdoiv said:
Did you add any brewing salts to the beer? Gypsum is a laxative in excessive amounts. Your local water supply may have enough in it already that if you add it to your brew you are getting to that poop threshold.
Click to expand...

That's the first thing I thought of. Epsom salts (to add magnesium) are pretty powerful laxatives, too.

Thanks for everyones input...I will try & drink em this weekend...Maybe it was just a bad week for my body....

If anyone would like pictures of the p00 let me know..

I tell yah what. I normally dont drink the yeast but I have with my Heffe the past few nights. Tonight I got bad bad bad stomach cramps. Dropped the boys off at the pool and was thinking, 'Why does it smell like yeast in here? oooooh...'.
E

I haven't brewed anything myself, so take this for whatever you think it's worth, but once I was drinking some of my friend's homebrew with him and another friend, and all three of us were eventually taking turns on the toilet for a couple hours that night (I was the first to be affected, and attracted some ridicule until it hit the other two). Quite a while later (we don't get to see each other too often), I asked him if he ever found out what went wrong, and he replied that we'd just gotten into that batch too early, so the yeast was still active and did some funny stuff to our guts.

I don't remember if he actually said this, so I'm not sure, but the impression that I got was that the beer eventually grew out of it... Maybe some more time will fix it?

J
Anyone have problems storing liquid yeast in your fridge door?

US-05 vs Cider House Select