I am selling a Vessi Fermentor from WLabs (Whirlpool). Asking $800.

It is used, obviously, but is complete, and includes an extra full set of gaskets and a couple of extra parts.

And here's the story: I bought it used (saw the opportunity)... and I've never even used it! I will tell the full story of the acquisition to any interested buyers, but will already be writing enough of a novel here. I saw it listed locally, and acquired it from the original owner. The original owner, not an avid homebrewer, acquired it, used it twice, and left it sitting after a halfhearted cleaning. It sat in his garage, where it was neglected. When I acquired it, it was non-functional, due to plugged lines. I gave it a relatively basic disassembly cleaning by removing all the lines, connectors, etc. and finding the sediment plugs, which were obvious in one particular elbow... and presto. I gave the exterior, interior, tank and lines a thorough cleaning with PBW and a rinse. It is now functioning like a champ. I tested the cooling, pressurization, etc., and it all works great. The regulator was acting funny, so it has been replaced with a brand new Kegco regulator. (The regulator in the machine was "just a regulator"... nothing fancy or proprietary.)

It now has only a couple of minimal cosmetic flaws. The top cover which is removable (and is pictured attached to the side) was etched by something the previous owner left sitting on it, and he tried to 'buff' it out... making it 1000% worse in appearance. I did a little internet research and refinished the entire top cover, and it now looks pretty darn good. However, it does not have the same 'sheen' as the rest of the stainless, and you can tell it has been refinished. However, it is consistent, and looks pretty good. Not perfect, but waaaaay better than it was, and looks good enough that the entire unit is once again impressive to behold.

There is a small dent on the front of the cosmetic tank cover... the equivalent of 'hail damage' dings you might see on a car. The dent is on an EXTERIOR cosmetic cover. The fermenter tank itself is not dented (there is insulation and the heating/cooling apparatus between the exterior cover and the internal tank). The damage is cosmetic only. I just bought a 'paintless dent restoration kit,' that seems like it should work, and will be giving that a go over this weekend. The dent will probably be gone before any potential buyer comes to see it. (I'll post an update if it works.) If it doesn't work... the exterior tank cover will have a minor cosmetic ding... that unfortunately is front and center on the unit. D'oh.

This unit, overall, is really impressive looking, and is a really neat and functional piece of equipment.

Would I pay something reasonable. Yep. It is impressive, and has a lot of functionality.

For $800ish, it is an excellent piece of equipment. 8 gallon pressurized fermenter, with pushbutton heating/cooling. Once you put your wort in it, you never have to open it. You can pull the sediment/trub out without any oxygen entering. It can push already carbonated beer to a keg (RIDICULOUSLY easily). You can bottle from it... serve from it... OR... use the tap to hydrometer samples throughout fermentation. The thing is functional in a lot of ways, and is crazy convenient. My plan was to make 6 to 7 gallon batches... repeatedly brewing/fermenting, filling a keg, and repeating. Hydrometer samples using the tap... would be beyond convenient. After filling a keg with 5 gal, I could throw any leftover in bottles using a counterpressure filler (which can be easily attached)... or in growlers... or just drink the 1+ remaining gallons right from the machine before cleaning and doing another batch.

Its got lots of upside... and at a reasonable price, is totally worth it. (Think conical fermenter... chiller unit... all in 1... pressurized... it starts to make sense.)

So why am I selling? Just because I have too much stuff, and don't need a kickass 5 gal batch apparatus when I like to do 10 gallon batches at least half the time.

I am in NW Indiana, about an hour from Chicago. Worth the trip if you're interested. The thing weighs 150 lbs. It will easily fit in a minivan, and probably most SUVs. 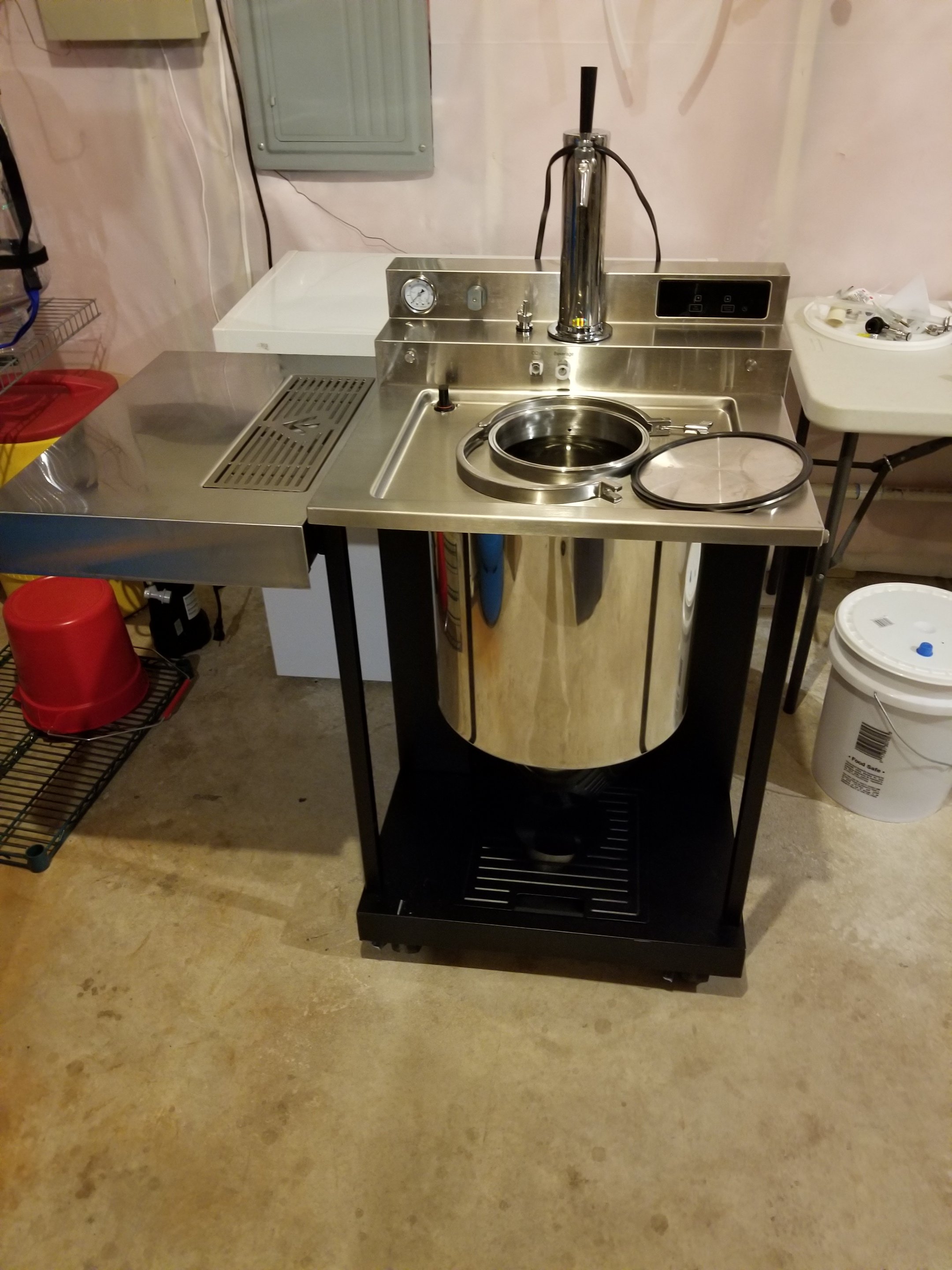 I’ve been interested in one of these since they were announced and your price point has me really interested.
J

Any history on what happened with the company selling these? I'd never heard of them before your post and really liked the looks of it. I ga e the company a call and they're still answering the phone, but are sold out and are no longer in production.

Aside from being expensive, is there some quality issue with it?
OP
B

Jtvann said:
Any history on what happened with the company selling these? I'd never heard of them before your post and really liked the looks of it. I ga e the company a call and they're still answering the phone, but are sold out and are no longer in production.

Aside from being expensive, is there some quality issue with it?
Click to expand...

WLabs is apparently a pilot project division of Whirlpool (or some relationship exists like that). If you google it, there is some info. I can't say I know the history or future plans any more than what is available online. Quality is high-end. Fit and finish are darn good, stainless steel top is thick gauge. I do see they are presently sold out... beyond that, can't tell you any more.
OP
B

No trip to Florida in the works.... and if I were headed that way, I'd need room in the minivan for luggage. ;-)
J

Im in the same boat. I'd love to have this thing, and I think your price is spot on. Im in Eastern Nevada though and unless you're going to California any time soon, I dont see me getting it. Since they ship on a pallet, that's obviously out.

Good luck with the sale.
OP
B

PRICE REDUCED TO $650. Hoping someone in the Chicago area is interested in a great find. Would like to get it out of the basement before I use it and decide to keep it!

Here's another pic with the top in place... (and I forgot the drip tray, d'oh!) 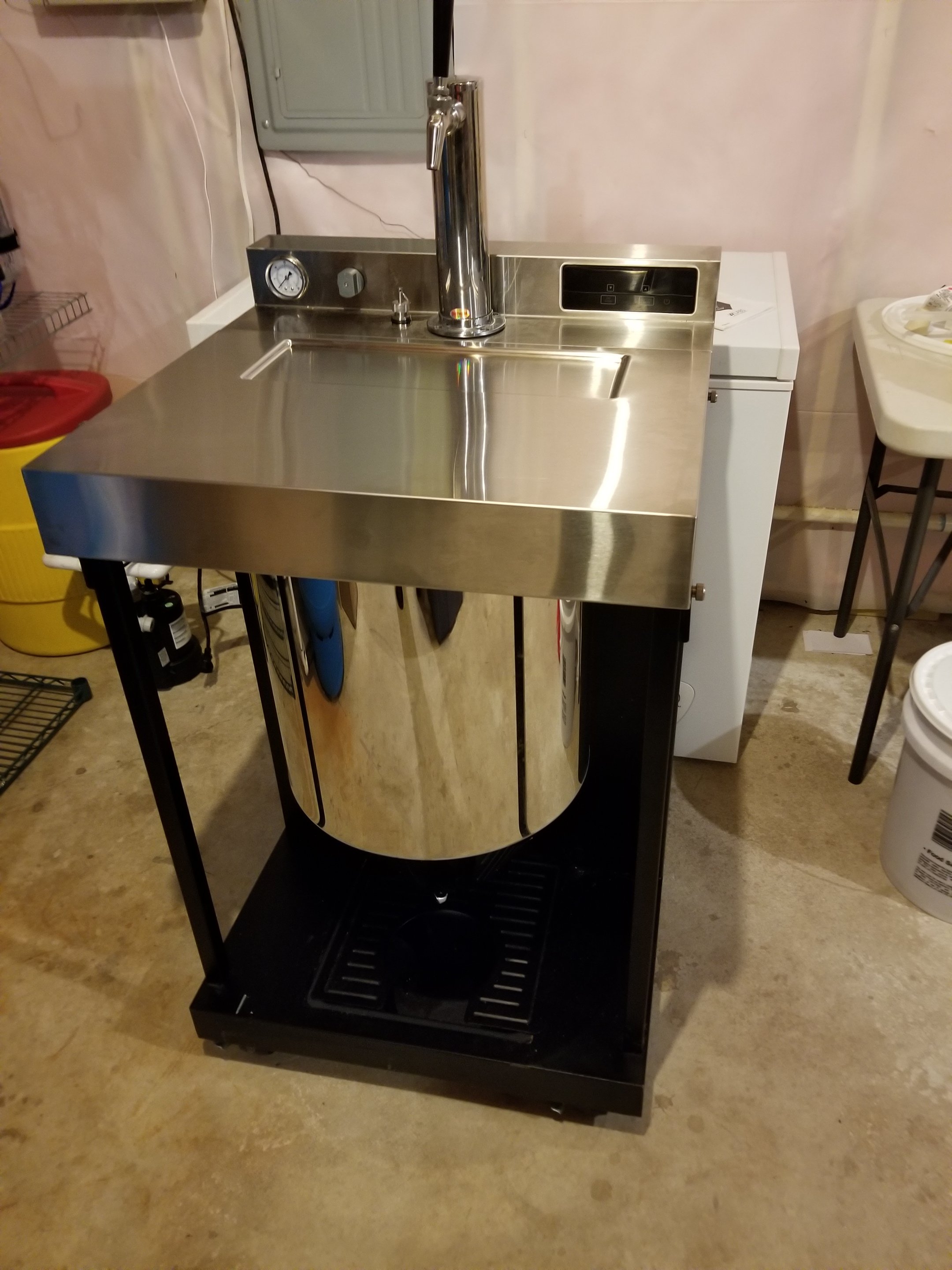 How does the refrigeration work? How far are you from Knoxville tn?
OP
B