So this past Saturday I used my Shirron for the first time. I don't have a spigot on my kettle, and I use glass carboys, so I used the DIY wort wizard, seen below: 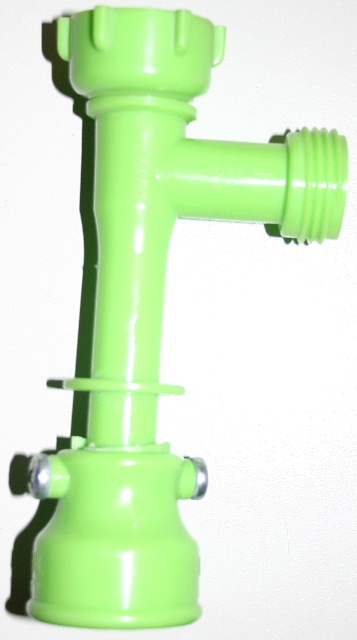 I used a SS racking cane compounded with the PVC-collar/hop-bag for straining purposes. Everything worked wonderfully, 5.5 gallons was down to a remarkable 54 degrees in just over 7 minutes.

However, I have a problem with the wort-wizard itself. I see in all the pictures of brew set-ups with the pet-store version, users have taken off the outlet piece (with the screws). When I did this, the "pump" didn't work. Water flowed out of both ports, instead of creating the vacuum through the side port. Only when I put this back on did the vacuum work. It's really not a huge deal, except I would love to channel the outlet water directly down the drain. Especially for my indoor brew sessions. Has anyone else had this problem, or do you know what creates it? If I have to leave this piece on, does anyone have any recommendations/ideas on how to channel the outlet water?

I think it needs the back pressure to make the vacuum work. When I used one, I tried taking it off and it still worked, although much slower and less efficiently, but I've got monster water pressure here. I know others have hooked a hose up to the outlet with success. Try that and see if it works.

Also, did you pull the end off after you had already started? If so, then the carboy would've already built up enough negative pressure to suck the water back. Starting with it off may not lead to the same problem.

I used to use the same venturi device. I just put a hose over the end, and didn't have any problems*.

A very brief writeup can be found here.

* When I would shut off (or quickly change the rate of) the cooling water, sometimes water would shoot through the vacuum hose into the carboy. I remedied that by making small changes to the rate of flow, and removing the carboy cap before turning off the water.
OP
OP

Hmmmm...thanks for the replies. I noticed you're angle-ing the vacuum port up, is this at all important? Also, why the zip tie on the screw on port part?

I may just have to re-try this.

And yeah, I had read a bunch before hand with the venturi about stopping the vacuum before turning off the water.

PseudoChef said:
Hmmmm...thanks for the replies. I noticed you're angle-ing the vacuum port up, is this at all important? Also, why the zip tie on the screw on port part?
Click to expand...

I don't know how important it is to have the vacuum port facing up, but when I was putting it together, I thought it would be a good idea. I didn't want gravity to pull any water into the vacuum, so I used the garden hose angle adapter, and the zip tie to keep it from rotating.

I never tried it any other way, so I don't know if they helped or not.

The key is making sure the connections are tight on every single place a hose is connected. On the chiller, on the carboy cap, everything. I often lose my seal on teh carboy neck--I just put together 2 zipties around the carboy cap and it holds. Experiment with water sometime to make sure you can get it right. You can see my set up in this pic: 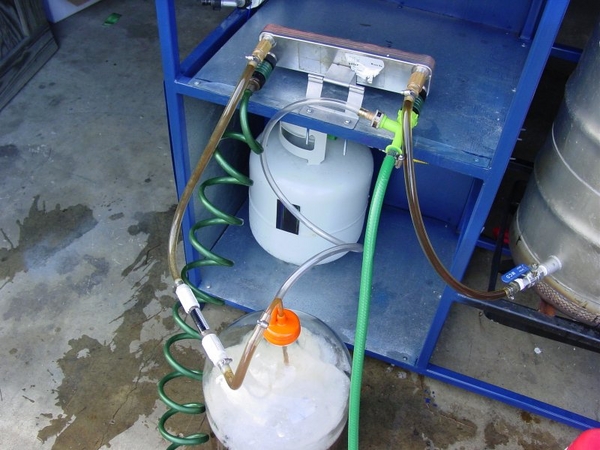 I have found the problem, and like many, the solution was simple (and made me smack my head!). Lil' Sparky was on the right track when he suggested that the garden hoses usually work fine.

I was pretty confident the problem was in the water out and the creation of the vacuum itself, since I had observed that whenever I attached a hose (not a garden hose, in my case, but rather tubing) to the outlet to direct the flow, the vacuum was lost. If I removed this, everything worked like a charm, but water would spray everywhere.

The problem was the hose itself: I bought it as a rolled up, pre-measured 10' length of tubing, and therefore there were multiple kinks in it. With these kinks, the water wouldn't flow out smoothly, basically creating a water traffic jam in the tubing. The water traffic jam would then back all the way up into the wort wizard itself, and the relase point would be for the water to begin flowing out of where the vacuum should take place.

A couple of soaks in hot water, some bending and smoothing here and there, kinks removed, and everything worked smoothly. I did notice a decrease in flow rate than when I had the removable piece on there, but I still could flow 5 gallons in less than 10 minutes.

Just writing this up for those who were curious (Dude), and thanks everybody for your help.

I knew it had to be something simple. If I ever had a problem with mine, it was a leak somewhere or a kink in the hose.

B
Any automated way to measure gravity during boiling stage?