Here is my comparison of a few wort chiller types and brands. Chilling your wort after you’ve finished the boil serves a number of purposes. There’s the scientific aspect of how chilling it quickly causes certain protein strains to form and precipitate out, and there’s corresponding studies of why that’s a good thing. Another key purpose is that once your wort gets below about 140F, it’s no longer hot enough to kill random stuff that floats into it. So the sooner you can get it down to pitching temperature and get it sealed up, the less exposure risk to wild yeast. The final reason, though, is important whether you are an organic chemistry nerd, a germaphobe, or anything in between- your time. The quicker you cool it, the sooner you’re brew day is done. As with most things in homebrewing, there are a number of equipment options to get the job done. I’ve tried to cover the key ones here, with some hands on trials to understand the differences. 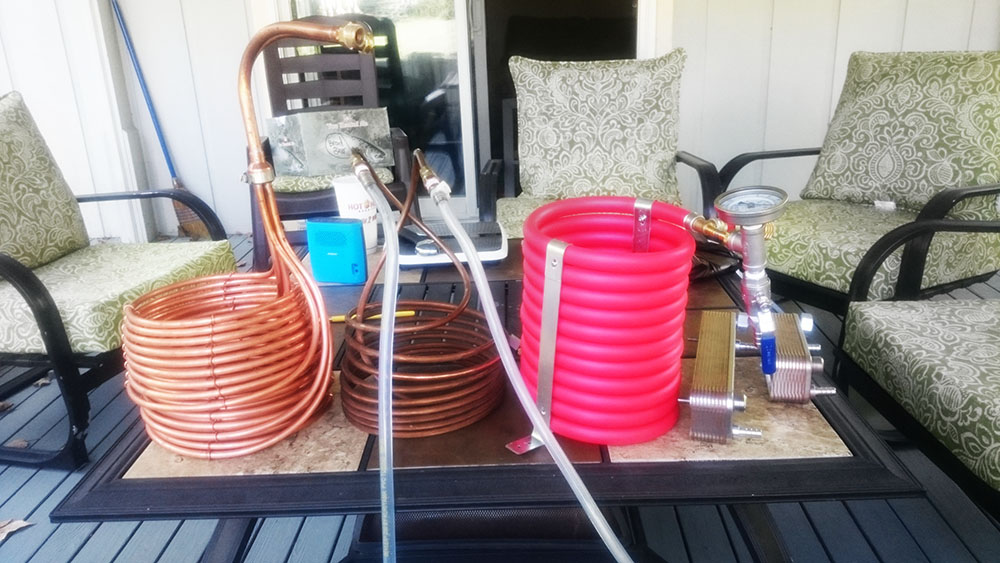 The immersion coil wort chiller is by far the most common wort chilling method. This is a coil of copper tubing that you place in your hot wort and flow cold water through it to pick up the heat and whisk it away. There are variations of diameter of the tubing and length of copper. Larger diameter allows faster cooling water flow through it and longer lengths allow more surface area in contact with your wort for better cooling. For these to be most effective you need to move them around in the wort, otherwise they sit in local cool zones and take longer to get the heat out of your entire wort.
Counterflow chillers use a pump to force your wort through copper tubing, and that tubing is routed inside a larger diameter cooling hose that is flowing water. Wort goes in one end, cooling water in the other, and they flow past each other in opposite directions- thus earning the ‘counterflow’ name. By effectively shrinking the volume of wort being chilled relative to the cooling water, you get superior cooling times to immersion chillers. Use of a pump means additional expense, but it also makes wort chilling a passive process rather than one that requires you to stir your wort or manually move your wort chiller coil around.
Plate chillers work similar to some radiators you may have in your car. There are multiple layers inside the chiller that interweave layers of cooling water and layers of wort, separated by heat conductive copper. They are similar in concept to counterflow chillers in that they shrink the volume of wort being cooled by forcing it into narrow passages, and providing lots of surface area of conductive metal in between cooling water and wort to get the heat out. These also require a pump to move the wort through them.


Time to Cool Data on Websites

There are a lot of variables that go into the time to cool the wort. While trying to understand why some of my performance tests were notably slower than the vendor’s published data. JaDeD Brewing was helpful in pointing out a number of differences between their test set-up and mine that could explain the difference. These variables were kept the same in my trials, but I feel it’s important to note since I’m confident the numbers the vendors publish are accurate for their set-ups, but you can’t simply compare one website’s time to chill claim against another’s. You need to ensure all of the variables are the same.
Volume of wort is an obvious variable. In my trials I was chilling 6 gallons of hot liquid where in some vendor data they were measuring time to chill 5 gallons. So I was cooling 20% more liquid volume. I wanted to get my wort to 70F, and was using 66.5F cooling water, or trying to cool to 3.5 degrees above my cooling water. The smaller the temperature delta between your wort and cooling water, the time to transfer heat goes up significantly. Some vendor test data measured time to 10 degrees above cooling water, but I wasn’t interested in cooling to 76.5F because that would be warmer than I wanted to pitch my yeast.
Cooling water flow rate is another obvious variable, but it goes beyond how many turns of the faucet handle you give it. The shorter the hose, the less pressure drop you’ll get and thus get a better flow rate through your chiller. Size also matters. Garden hoses can be bought in various diameters. At typical home water pressures, your flow rate doubles with a 5/8” hose compared to a 1/2” hose. And lastly, flexible/collapsible fabric hoses will also suffer more pressure drop than a sturdy smooth-bore hose. You’ll note in my data summary that flow rate is not the same, but each chiller has a different flow resistance based on their geometry, so they will naturally have a different flow rate.

I evaluated all of these systems and collected times to cool the wort. Since I was going to be comparing times between the systems, in order to keep things consistent for my experiment, I simplified things and used heated water as my “wort”. To try this with different batches of beer would be nearly impossible to get the same density and volume of wort. So instead, each system was evaluated for its ability to cool down my brew pot filled with 6 gallons of water which was heated to 200F with a propane burner. I collected data for cooling time down to 75F as well as time to 70F. My tap water was measured at 66.5F coming out of the hose on a sunny fall day in Michigan.
The time to chill data does have some differences between the different systems. With the immersion chillers, the time to chill represents the time to chill the entire pot to that temperature. And then you’d need to add to that the time to transfer it to your fermenter. I didn’t get into that transfer time since there are multiple different methods people use. For the plate chillers and counterflow chiller I noted the time to reach 70/75F at the wort outlet from those chillers, as I was recirculating the wort back into the brew pot until the chiller output reached 70F. Once hitting your desired temperature, you’d stop recirculating and just transfer into your fermenter. I also measured the flow rate of wort out of the chiller at the end since that plays a factor in how quickly these systems drop the wort temperature. 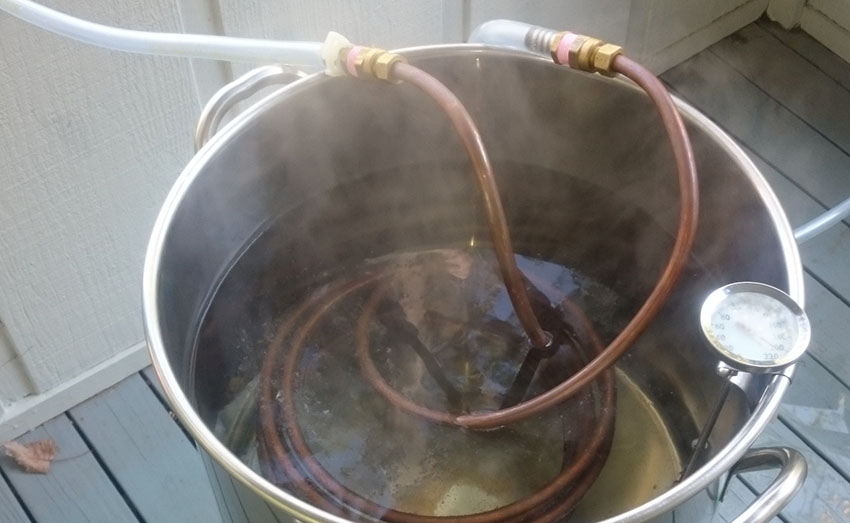 I started with the common immersion chiller made up of 25 feet of 3/8” copper tubing. Although quite simple to use, the bobbing up and down of the chiller to keep it moving grows quite boring. And at the end of a long brew day, it can seem like forever for the wort to drop those last 10-20 degrees. But it’s the most economical choice once you step up from the ice bath, and it definitely beats the ice bath for time. 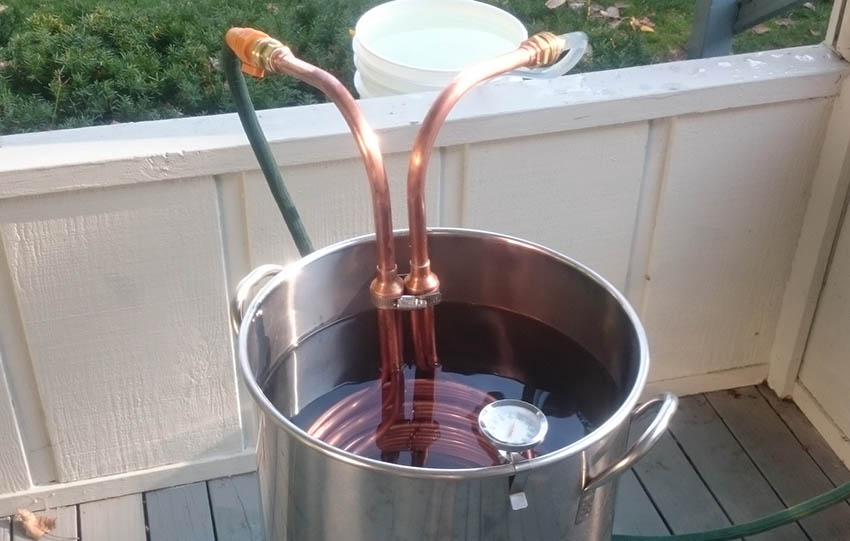 Next I evaluated JaDeD Brewing’s Hydra. While still a copper immersion chiller, it’s definitely like an immersion chiller on steroids. The cooling water inlet splits off into 3 separate cooling tube streams and then twists and turns its way around into a dizzying array of copper to provide a ton of surface area to be in contact with your wort. Its chilling time was greatly reduced over the standard copper coil accordingly. Compared to the counterflow and plate chillers, it doesn’t require a pump and associated hoses/clamps so it is simpler to use. Cleaning would seem to be easier since you only have to wash the outside, not get inside passages clean, but the coils upon coils also leaves lots of nooks and crannies to collect hop trub and hop debris that would need to get cleaned out well. 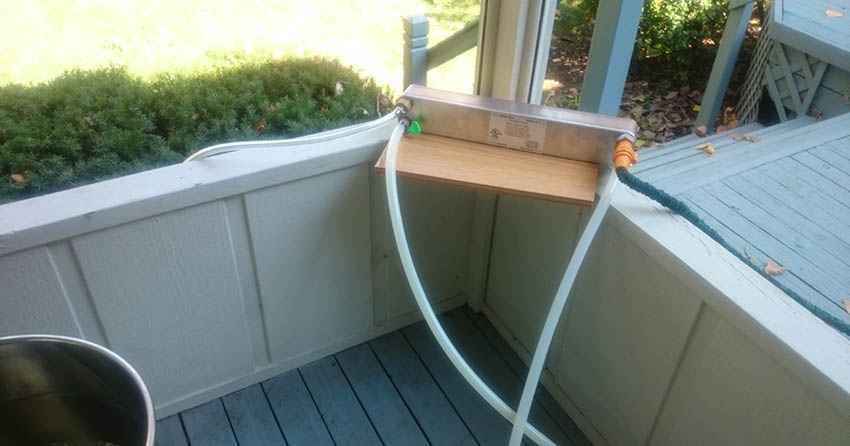 The plate chillers and counterflow chiller needed a pump. There is a new wort pump in the homebrew market made by Keg King out of Australia. In the US it’s sold through Williams Brewing as the Mark II Wort Pump. Magnetic drive pumps that are capable of handling boiling fluids can be costly. And for the most part, the homebrewing world is dominated by Chugger and March brands. This Keg King pump comes with all the same capabilities, a higher waterproof rating and about half the cost. Per Keg King’s information, their durability/longevity is equal or better than competitors as well, but I didn’t do a durability test. It worked great for my trials, reliably starting up and flowing easily all while being very quiet. 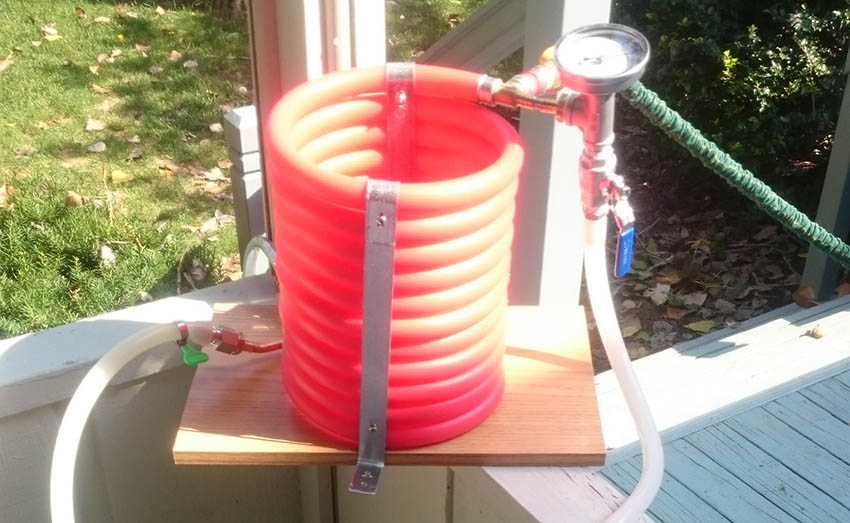 My next evaluation was with Brick River Brewing’s ExChilerator MAXX counterflow chiller. It was equipped with the optional ball valve on the output to allow control of wort flow through the chiller, which also came with a large dial temperature gauge plumbed into the outlet as well. This was amazingly convenient as I could monitor the temperature output both to know when to send it into the fermenter instead of recirculating, and also when to throttle down the output to eek out the last few degrees with more contact time with the cooling water.
The cooling time was very fast, and the flow control and temperature dial made this a great operation. My last evaluation was with a pair of plate chillers. I had a range of sizes from Duda Diesel to compare the larger higher performance one with the smaller lower cost one. The small chiller performed well, besting the simple immersion chiller by a significant time margin. The large plate chiller was amazingly fast, easily the fastest of this bunch. Both of these plate chillers probably could have been improved some by implementing an output flow restriction valve and temperature gauge like the ExChilerator, but that wasn’t part of this test.
With the small passageways inside the plate chiller being a potential concern of getting clogged with hop debris, I did a separate trial with a plate chiller on a very hoppy Rye IPA batch with 4.25 oz. of pellet hops in a 2.5 gallon batch. I used a BIAB bag as a hop bag to keep the hop debris mostly contained, and I didn’t have any issues with a clogged chiller. And cleaning wasn’t a major concern either, just rinsing with hot tap water in the sink got clear water coming out in short order (note that Duda recommends flushing with hot water and/or cleaning with OneStep cleaner).

In conclusion, there are different options that can significantly cut down on your wort chilling time, but they do come with a price tag. So you need to weigh your options of price versus time to see if it’s worth the step up to you. And then amongst your options, different chillers have different features and capabilities, and once you get your chilling time down to a matter of minutes you can count on one hand, these different nuances are important to weigh to get the right chiller to match your preferences.