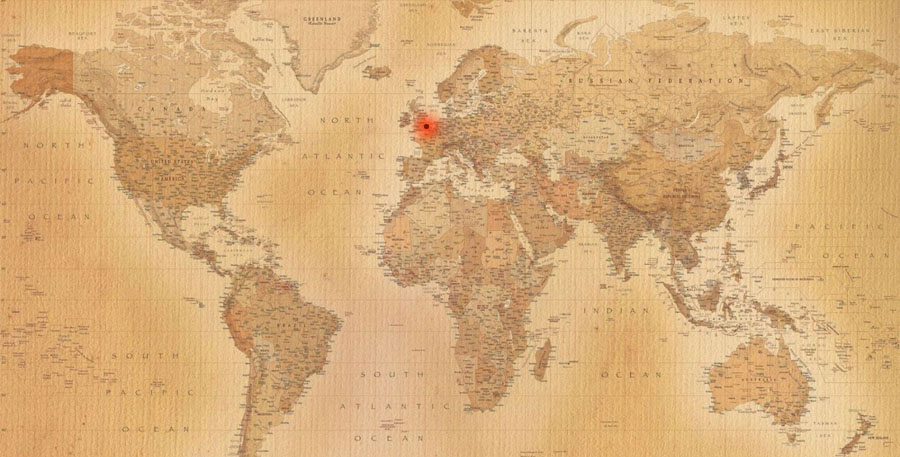 Editor's note: Come with us as we travel the World of beer all week long. This is the first of several articles full of rich history and great information. Enjoy!​
Kent is synonymous with British beer. The garden of England’s fertile ground has grown the hops that have come to define British beer for generations, such as East Kent Golding. These hops, with their floral, spicy notes, have been used for centuries in the production of British bitters and ales. Today the region accounts for around 50% of all UK hops.
This heritage goes back centuries with the eponymous East Kent Golding having its roots in the Whitebine hop strain, which was introduced to Canterbury in 1737. In 1790 a Kent hop farmer named Golding identified a version of the Whitebine, which had a heavier yield and was easier to pick. This became known as the Golding, where it was called the Canterbury Golding or Old Golding, before being sold as East Kent Golding since 1838.
But Kent’s place in British drinking culture goes back almost a century before Golding. Woven into the medieval market town of Faversham is Britain’s oldest brewery, Shepherd Neame. Founded in 1698 – but with roots going back to 1500s – the brewery produces 70 million pints annually. Shepherd Neame beers, such as Spitfire and Master Brew, have even been afforded Protected Geographical Indication from the European Union.
Yet Kent’s brewing culture isn’t just a thing of the past. Like much of the UK, small breweries producing quality beer have opened up throughout the county. Breweries such as Time & Tide Brewing in the seaside town of Deal, Hop Fuzz Brewery in Hythe, and Gadds in Ramsgate are now getting noticed for distinctive beers that continue Kent’s great British brewing tradition. 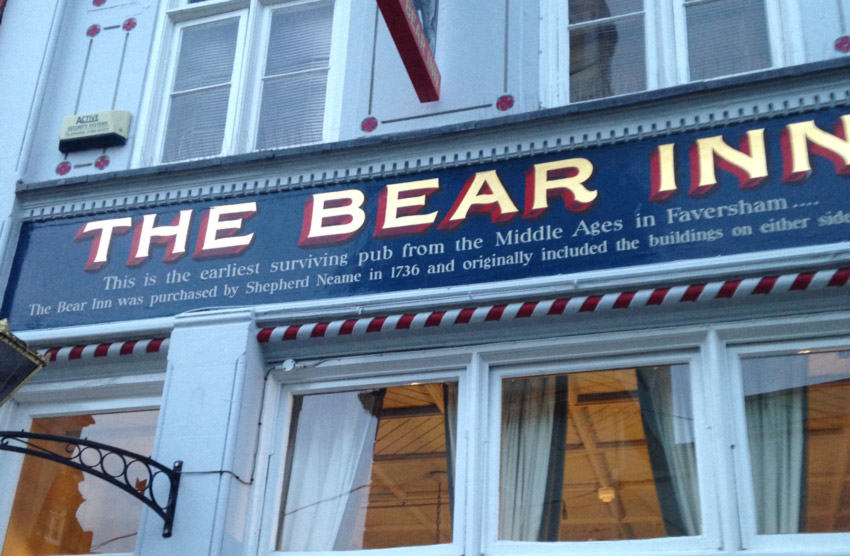 The Bear Inn, Faversham. A Shepherd Neame pub dating back to the Middle Ages.

“Traditionally, Kent ales would have been dry with a fairly flat head due to the hardness of the water, but modern day water treatments have to a certain extent homogenized beers to a Burton standard,” says to Martin Guy, founder of The Canterbury Ales brewery. “The abundance of hops does tend to carry through in Kentish beers when compared to beer from farther north which tends to be sweeter and less hoppy.”
Guy is part of a trend that has seen the opening of more and more micro-breweries in Kent which is providing their own take on classic British beer styles.
While the UK has experienced a craft beer revolution, with London-based brewers like Beaver Town and The Kernel producing hop-forward, big-hitting, percentage beers enthused with New World hops, Kent’s small breweries are taking craft principles – attention to detail, smaller batches – to the world of real ale.
“Increased demand from drinkers with a more sophisticated palate. The decline of traditional pubs due to Pubco (a company that owns a chain of public houses) influence and rise of micropubs presenting a wider variety of ales and styles” are all factors in the rise of micro breweries in Kent, according to Guy.
Operating in the village of Chartham just outside of Canterbury, The Canterbury Ales is an 8 barrel brewery which takes its inspiration – and branding – from Chaucer’s classic. Guy brews beers according to his own personal taste, reflecting the individualism that is driving the demand for more artisanal beers. These include The Reeve’s Ale, a copper best bitter, and The Merchant’s Ale, which is described as a mild Kentish stout. 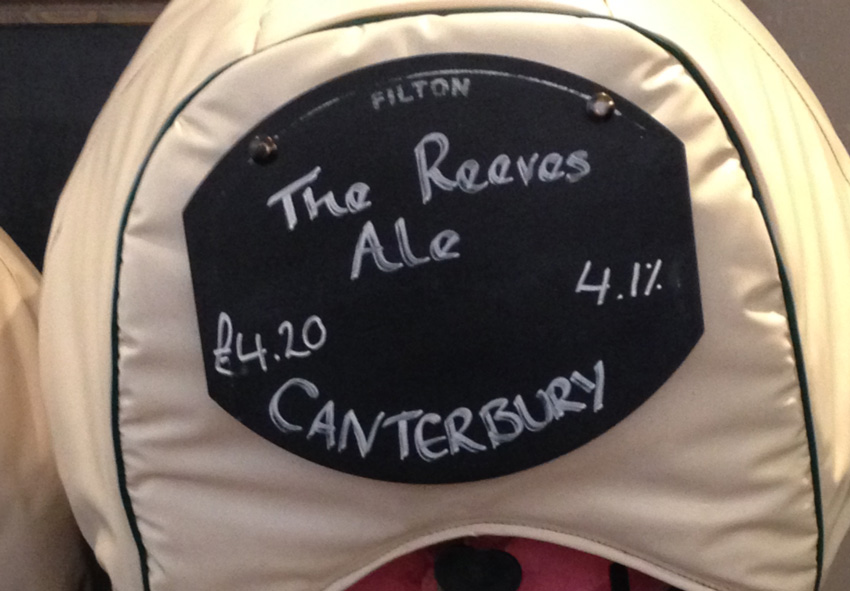 The Reeve’s Ales on sale at the Sandwich Folk & Ale Festival
Guy believes beer duty relief, the relatively low entry to start a micro brewery and a growing number of people disillusioned with low paid jobs who now want to do something that they enjoy. This has led to the number of breweries opened across the UK hitting an 81-year high in 2015 according to the Campaign for Real Ale (CAMRA).
An hour’s drive away from Chartham is the leafy town of Tenterden where the Old Dairy Brewery offers its own take on traditional British beers. Set up in two World War Two Nissen buildings, the 30 barrel brewery produces six staple beers. Regular beers include Red Top, a classic best bitter with toffee notes, and Blue Top, an IPA whose hop profile includes East Kent Golding.
Provenance plays an important role, with many of the hops used in the brewery’s brewing process coming from less than 3 miles from the brewery. The brewery cites the rise of Kent’s micropub-scene as a positive move to encourage people to try locally produced craft ale.
Opening in 2005, the Butcher’s Arms in Herne Bay, Kent, was the first micropub in the UK, taking advantage of a change in UK law that made it simpler to sell beer. Micropubs offer drinkers competitively priced pints of ale by keeping their overheads low and beer local.
Space is limited in a micropub, with many often opening in empty shop spaces not much bigger than a living room. There’s no lager, no music, and the focus is on good, regularly changing local beer and good company. Some, such as the Four Candles in Broadstairs, even combine micropub with microbrewery, allowing it to lay claim to the title of smallest brewpub in Britain. 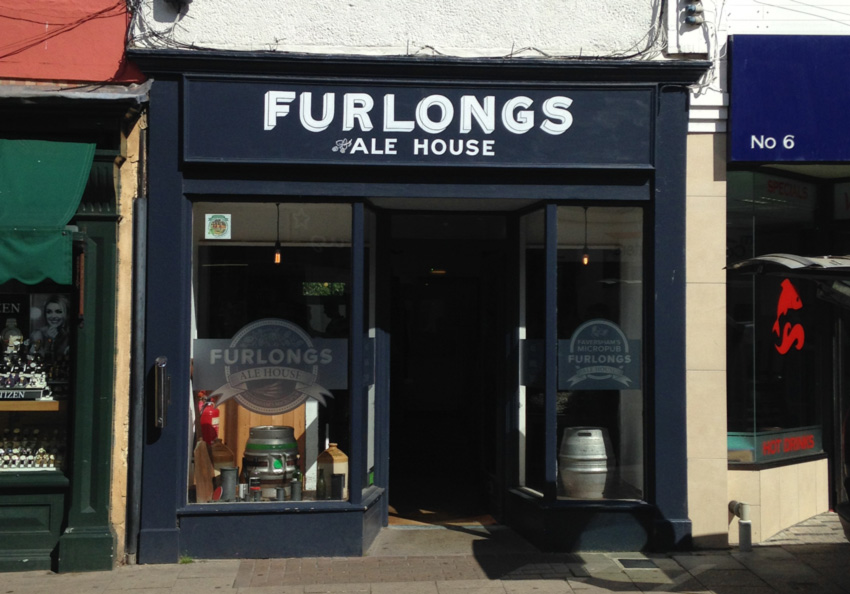 Furlong’s Ale House micropub in Faversham
This combination of ale and a relaxed atmosphere has led to almost 2000 micropubs opening across the UK – an incredible feat when you consider that traditional British boozers are calling it time permanently at an alarming rate, with CAMRA estimating that UK pubs are closing at a rate of 29 a week.

“I always feel as if it is like drinking the last of summer just as the season's turn and autumn chills begin to creep into the air,” says Sophie Atherton, a journalist and beer sommelier who has looked after publicity for the Kent Green Hop Fortnight since it began in 2012.
During the fortnight, Kent’s breweries produce beers using fresh hops, otherwise known as green hops (or sometimes wet hops in America). Rules for brewing a Kent Green Hop beer are simple: any variety of hop can be used as long as it is grown in Kent. While some green hopped beers use dried hops for bittering, many don’t. Pale ales are the benchmark for such beers, but IPAs, bitters and even porters are green hopped.
Drinkers can expect to find between 30 to 40 different beers, including those from the Old Dairy and Canterbury Ale, on offer throughout the county once the fortnight gets underway in late September.
“There is a lightness and a freshness to the beers which is characteristic regardless of style,” Artherton explains. This is due to the fresh hops contain the oils lost during the drying process. One way of looking at brewing with fresh hops is how fresh herbs are used in cooking, with the flavors imparted typically being more delicate.
The Green Hop Fortnight is just part of the country-wide events underpinning Kent’s brewing culture. Other events include Sandwich Folk & Ale Festival, Kent Beer Festival and Planet Thanet Easter Beer Festival. All proving that Kent’s place in beer culture isn’t a thing of the past, but is vital and current.