Winemaking has been both a business and a hobby for centuries. Whether you are a commercial winemaker or make your wine at home (or considering getting into the game), there are general terms that you will want to familiarize yourself with. The following terms are ones both commercial and home winemakers use. This is by no means a complete list of the terms used, and definitions have been simplified. However the terms contained in this listing should be quite sufficient for the home winemaker to begin with.

Acetic Acid – Along with ethyl acetate, creates a volatile acid, and is a sign of spoiling wine. Acetic acid is associated with the taste and odor of vinegar. Found in all wines, it is also known as Ethanoic Acid. When levels are low, the wine's flavor can be enhanced by acetic acid. But if the levels are too high, then the flavor can be dominant, producing a vinegar taste, which is considered a (major) flaw. Acetification is the process that, through the bacterium acetobacter, will produce acetic acid in the wine, turning it to vinegar.
Acidity - Acidity gives the wine its crispness and vitality, however, there must be a proper balance to keep the wine from being too flat or too sharp. Tartaric acid, malic acid and lactic acid are the three main acids in wines. 0.6%-0.75% acidity is a balanced dry table wine.
Actual Alcohol – The amount of ethanol present in wine.
Alcohol – Also ethyl alcohol. Although used as a generic word for all alcoholic beverages, alcohol usually refers to the ethanol that is found within the beverages. A chemical compound, ethyl alcohol is formed through the action of yeast on the natural sugars (content) of the grapes during fermentation. When a wine has too much alcohol, it is said to be unbalanced and described as alcoholic.
Alcoholic Fermentation – This is, in simple terms, process of turning grape juice into wine through the yeast breaking down sugars (glucose) into alcohol and carbon dioxide.
Amino Acids – Amino acids are the proteins that are found within wine grapes. These proteins are formed by a chemical compound known as a fruit ester (the basis for many fruit scents) which, in turn, are consumes during fermentation.
Anaerobic – The chemical changes that a wine goes through, in the bottle, where there is an absence of oxygen.
Antioxidant – Chemicals that are used to prevent the (grape) must from oxidizing. Asorbic acid is one of the antioxidants that are used
Appearance- When someone talks about the appearance of a wine, it is referring to the wine's clarity.
Back-Blend – The process of using fresh (un-fermented) grape juice to add sweetness by blending it in to a fully fermented wine.
Balance – When there is no dominate element in a wine, instead all of the elements nicely blending.
Blanc de Blancs – or “White of Whites” is a white wine made with only white grapes.
Blanc de Noris – or “White of Blacks” is a white wine (which may have a pale pink hue) made with either red or black grapes, by way of the juice being squeezed and fermented without being allowed any contact with the grape skin.
Body – A wine is usually referred to as full-bodied, medium-bodied or light-bodied as a result of the impression that the wine leaves on the taster's palate. The body of a wine is the result of a combination of the glycerin, alcohol and sugars.
Bottle Age – The time that a wine has been aging and maturing in the bottle.
Bung – A common term for the stopper used to seal a carboy or barrel. When used with a barrel, it allows the winemaker access to add or siphon off wine when necessary.
Carbonic Acid – Carbon dioxide gas that has dissolved in the wine's water content, lowering the pH until degassing has taken place.
Carbonic Gas - Yeast will convert sugars into two natural byproducts during fermentation: alcohol and carbonic gas. Most of this gas will try to escape the fermentation container, however if the container is sealed (or closed), the gas will dissolve into the wine. Sparkling wine is the result when finally released.
Chaptalization – A process that is usually done if the grapes being used are not adequately ripe, it is where, during the winemaking, sugar is added to the must in order to increase the alcohol content within the fermented wine.
Clarification – the fining and filtration of wine in order to remove any solids suspended within and to reduce cloudiness/haziness (or turbidity). A Clear wine is when there are no particles that can be seen suspended in the wine. The wine will also have a degree of transparency, especially true for white wines. Natural clarification will also take place in the wine barrel, with particles suspended in the liquid gradually dropping to the bottom.
Cloudiness – When the wine is not or no longer clear to the eye. Although it may just mean sediment in an older wine, which can be fine, in a new or young wine, it can be a signal of possible yeast spoilage, instability of protein or, if bottled, re-fermentation of the wine in the bottle.
Cork Taint or Corked – Wine having an undesired aroma or flavor. May have, among other Faults (flaw in the winemaking process causing unpleasant issues with the wine), a musty or very off putting taste. It is due to a tainted cork which can usually be attributed to a cork that has mold growing on those which have been exposed to chlorine bleach.
Crush – After grapes are harvested, they are they are crushed prior to pressing. This process allows the juice to be released and the fruit soften or macerate, with their skins, before and during the fermentation process. The released juice is referred to as Free-Run Juice or Vin du goutte. In viticulture, crush also is used to refer to harvest time. 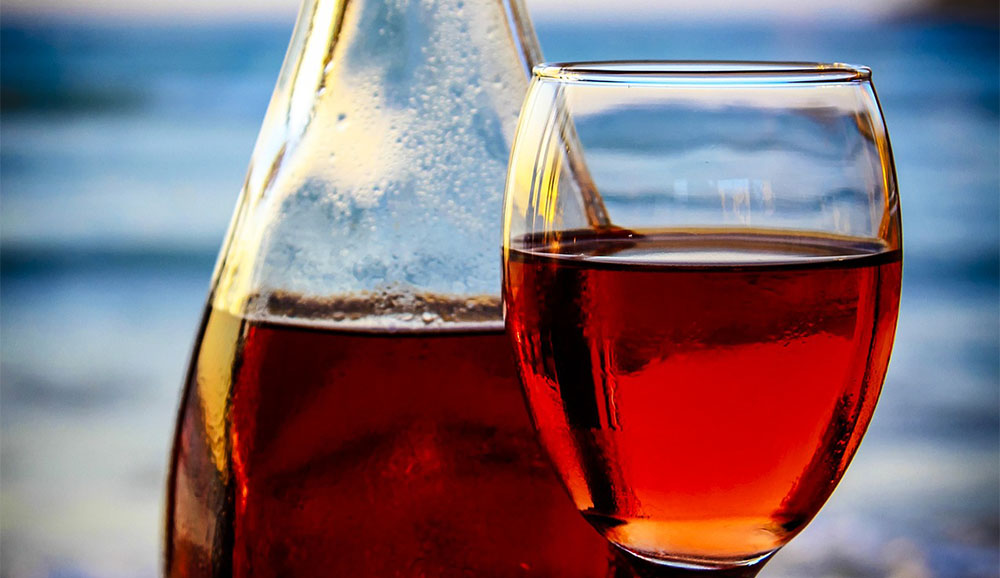 Decanting – Slowly pouring wine from its' bottle into another vessel in order to separate the sediment.
Dirty – All rank/bad and off putting smells that may end up in a wine. Cause may include bad corks and poor winemaking.
Dry – A term referring to wines with low or no residual sugars. However when referring to sparkling wines, it has the exact opposite meaning, and that wine would be sweet.
Early Harvest – Wines that are made from early harvest grapes. These wines will usually have a lower than average sweetness and alcohol content.
Esters – Compounds that contribute to the aroma of a wine. They are formed during either the fermentation or aging process.
Fermentation – Simply put. The process of changing grape juice into wine through the conversion of sugar into alcohol and carbon dioxide by yeast.
Filtering/Filtration – The removal of (unwanted) particles suspended within the wine after fermentation.
Fruit Wine – A wine made from a fruit other than grapes. It may have added sugar or honey.
Heady – A wine high in alcohol.
Headspace (Ullage)- The space in a wine bottle that remains unfilled after bottling.
Herbaceous – The smell and taste of herbs in a wine.
Late Harvest- Grapes picked later in season than normal and a higher than normal sugar level.
Lees (Mud) - Sediment in the wine. From the fermentation process, it can be made up of grape seed, dead yeast or other assorted solids. Usually this sediment is separated from the wine, however the lees may be stirred up to, among other things, release flavor into the wine through a process called Lees Stirring.
Maceration/Cuvasion – Steeping of grape skins and solids, in the wine, during the fermentation process, extracting tannin, aroma and color.
Mead- A wine made of fermented honey and water instead of grapes.
Mistelle – Grape juice that has had wine added to it before before the start of the fermentation process.
Also called Fortification.
MOG - “Material other than grapes”. Meaning debris that have been harvested with the grapes such as stems and leaves.
Must – Unfermented grape juice obtained through crushing or pressing. Can include skins, stalk/stems and seeds (aka “pips).
Nose – Aroma.
Oxidation/Oxidized – When wine has been exposed for too long to the air it begins to lose its freshness and turns a brown color. Although oxidation may play an important role in fermentation and the aging process of wines, too much is harmful. Some oxidized wines may be called sherrified as they may begin to take on the taste and smell of Sherry.
Peak – When a wine tastes and is at its' best.
pH- The measure of acidity or alkalinity. The higher the pH, the weaker the acid will be. Wines that are low pH will be tart and crisp. The higher the pH, the more susceptible to bacteria growth the wine will be.
Pomace/Marc- The scraps- ie: skins, stalks and seeds left behind after the pressing has completed.
Racking – Separating the wine from the lees or sediment after fermentation is complete, through moving the wine from one vessel to another.
Residual Sugar- In wines, grape sugar that is unfermented.
Hydrometer- A measuring tool used in winemaking that measures the amount of sugar in wines using specific gravity.
Secondary Fermentation – The continuation of the fermentation process through moving the wine into a second (different) container.=
Soft- Wines that are low in acid and/or tannin.
Stuck Fermentation – When yeast dies or becomes dormant too early, and the fermantation comes to a stop.
Sulfites- Produce by the yeast during the fermentation process, sulfites are naturally occurring and can be found in most all wines.
Sulphur Dioxide- A preservative used in winemaking.
Tannin- The compound substance that gives wine its' mouth-puckering feel. It comes mostly from the skins, seed and stems of the grape, but can also come from oak barrels (when used). Tannin is a natural preservative and antioxidant. It als helps the wine develop/age. Found mostly in red wine.
Tartaric Acid – The primary acid in wines.
Total Acidity- The total amount of acid found in a wine.
Triage- The sorting of grapes before the crushing/pressing process, in order to remove less desirable fruit or MOG. 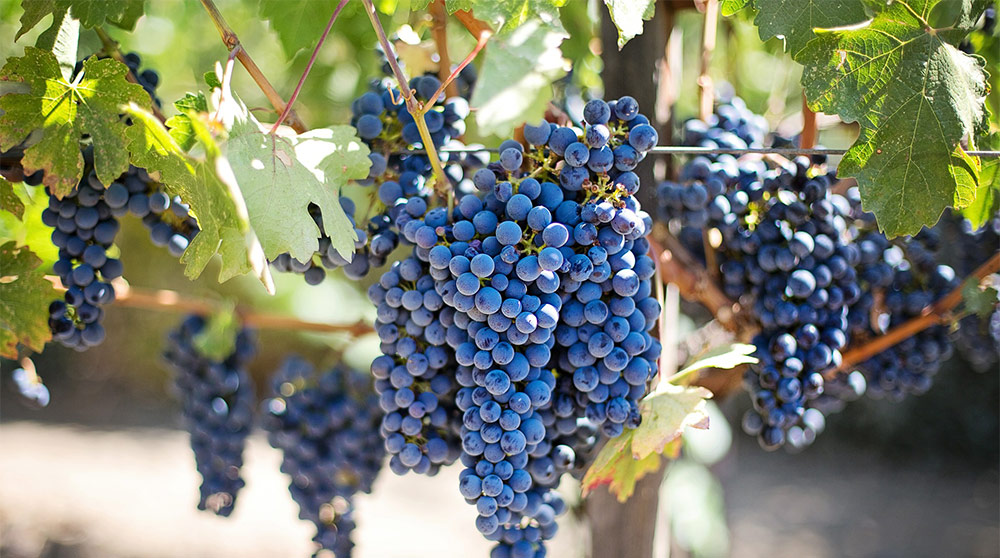 Varietal- Making a wine from a single grape variety.
Viniculture (Enology or Oenology)- The study (science) of the production of grapes for wine and the making of wine. This term is not to be confused with Viticulture, which is the science, study and cultivation of the grape.
Vinification- The process of converting grape juice into wine.
Volatile Acidity- Excessive and undesired amount of acidity.
Wine – An alcoholic beverage that is made from fermented grape juice.

Wine Cellar – A dark and cool storage area for wine.
Wine Fault – Characteristics in wines that are undesirable, often due to poor winemaking or substandard storage conditions.
Winemaker- A person who makes wines.
Wine Press – Machinery that is used to extract juice from the crushed grape.
Winery – The company or property where wine production takes place.
Yeast – A fungus/micro organism that produces enzymes that convert sugar to alcohol. It is a necessary element to wine making and other alcoholic beverage creation.
Zymology (Zymurgy)- The science/study of fermentation.

S
Grape to Grain: A Winemaker's Transition To Home Brewing