I'm a beer brewer at heart, but have decided to test out a wine kit. I just moved and most of my gear is in storage and Costco had a kit for 2 batches including gear for just over $100 so I bit. I figure with the gear included alone it was worth almost $100.

The kit is a Traminer (White) and after some research I decided to go with a colder fermentation to get a cleaner end product, much like I have done with beers since having invested in a chest freezer to control temps. I've set the freezer at 56F and it has been fermenting for about 6 days now and has gone from SG 1.098 down to SG 1.082. It's still bubbling away but far from the SG to transfer to secondary. I'm looking for some feedback to see if I've messed up, or if I'm on track.

I was planning on letting the fermentation continue, give it some more time to keep trucking, as with a colder fermentation it'll likely take a little longer than normal to finish up (no rush here if it gets me a better final product).

However I was wondering which of the three ideas might be recommended (or other option if suggested):

1) Keep on trucking, same temp and just give it a week or two longer to clear up.
2) Transfer to secondary, that'll rouse the yeast and get into the second stage.
3) Raise the temp to speed up fermentation (maybe up to 60/65F)

Thanks for your help!
D

I wouldn't have dropped down to those temps until the primary fermentation was almost done (SG around 1.020 or less). The yeast has a temperature range and I think you may be below its "useable" threshold. It will probably keep on working at that low of a temp, but it will take a really long time.

What was the yeast?

Oh, and Costco kits are not really worth the price, if you read the reviews and issue on this website.
R

I would raise the temp to about 65, still a nice cool ferment.
If you rack before you get down to about 1.020 you risk a stuck ferment as you may be letting a major portion of the yeast behind.
I would recommend some yeast nutrients and to give it swirl/stir to get some O2 in there. At this point O2 isn't a bad idea, least until about 1.050 or so.
OP
OP
B

I didn't change the temp (the readings were from last night). All I did was a slow stir to rouse the yeast and the SG is down to 1.072. So its still working away. From what I'm getting here a ferment around 65F should be a better low temp ferment than starting at 56F like I did.

From what I'm hearing I'm going to raise the temp to 65F (its in a chest freezer so I'll just change the target temp so that its not to drastic and doesn't shock the yeast.

Thanks for all the tips!

That should do it.
OP
OP
B

As for the kits, I'm in Canada, so I'm not sure if there's a different source for Costco. All the reviews are pretty good for the kits here and the price for the non-equipment kits go down to $50 for a double kit (60 bottles) so for less than a buck a bottle its worth it. My experience on the beer side is that kit beers can turn out decent if you use the right techniques.

I find more of us brewers are tainted as many start off with kits and move to either higher end kits or scratch brewing and find the quality increases. However over this time our experience and brewing practices have improved as well. I challenge an experienced brewer to go back to a basic kit and see the improved results.

A nice thing with the Costco kits is that if ordered online they come direct from the source (no time sitting on the shelves).

Yup warm it up. It went against my brewer instincts at first also, but wine likes it warmer. Definitely do not rack it yet.

Never made any kit but wine yeasts prefer warmer temperatures than ales or lagers (I think) AND during the first week or so in the primary you really do want to aerate the wine -a ) because the yeast need oxygen in the early stages of their cycle and b) you want to remove the CO2 which I understand inhibits the fermentation. If there is any solid fruit in your kit then c) you agitate the wine because you want to ensure that the cap of fruit is all exposed to the yeast (this is not considered like krausen. Quite the opposite.)

I know that brewers may have apoplexy at the idea of fermenting the wine until the gravity drops close to 1.005 in an OPEN bucket - perhaps covered with a clean dishtowel to keep out flies and pets - but you do really want to be able agitate the must two or three times a day and get air into it while the gravity is above 1.020.

Racking to the secondary will unnecessarily slow the fermentation if there are significant quantities of sugars still available. Racking will remove some (or much ) of the yeast depleting your colony. Unlike beer, fruit sugars are basically 100 percent fermentable - and so you are looking for a final gravity of below 1.000 (Alcohol is less dense than water). As I say, I don't make kits but I rack to a clean and sanitized carboy which I seal with an airlock when the gravity falls to around 1.005.
OP
OP
B

It dropped to 1.030 overnight, would you guys recommend putting it to secondary one it drops to 1.020 out letting it settle out a bit more first?
A

I never send it to secondary until fermentation has stopped and it has cleared a lot. But many say to rack right before fermentation is over at a gravity of about 1.000 - 1.002.

beerdrinker said:
It dropped to 1.030 overnight, would you guys recommend putting it to secondary one it drops to 1.020 out letting it settle out a bit more first?
Click to expand...

Any time a wine is 1.010 to 1.020 or under is a fine time to put into secondary and airlock- but I think kits have you airlock right from the beginning?

If so, just follow the kit instructions and they tell you when to rack.
OP
OP
B

Two batches on the go, the first Traminer and second Trebbiano have both made it down to 0.994 SG. The second was much faster as I didn't ferment as cold.

Off to another carboy for clearing, now I'll be able to drop the temp

I've attached a pic of the cloudy wines as I pulled a few samples.

The instructions call for dropping to 50-60F. Is that enough or would a colder temp be better? 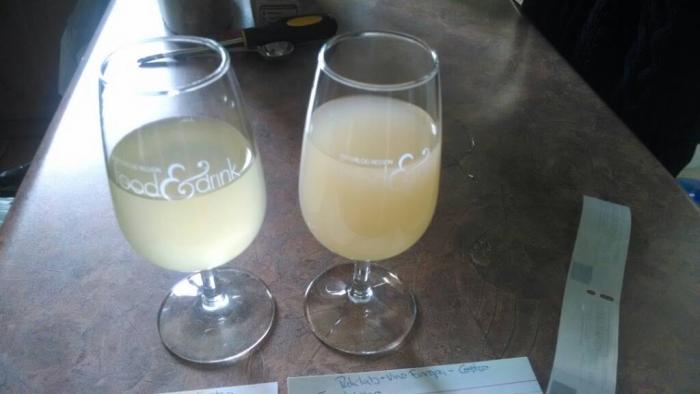 C
Do some winemakers really ferment 'dry' before moving to an airlock?

M
had to move it to secondary too early

Why would you rack from Primary to Secondary before fermentation in complete?