Which yeast for a Pale Ale?

I need to brew up a Pale Ale for a beerfest coming up on 9-11-21 to serve in the brew club tent.
I cannot brew it until next Monday August 2nd. I have liquid yeast Imperial House and Imperial Bartleby (hornindal strain) plus a number of dry yeasts like nottingham and s-04, US-05 and others.
Which should I use so that it can be ready? BTW, if it makes any difference the pale ale has 6 ounces of hops for an estimated 40 IBU.

I've recently just made an American Pale Ale using US-05 and around 6oz of Cascade. Turned out really well if that's the style you're looking for. Essentially like Sierra Nevada Pale Ale. Can't say for the other yeasts though. However, it really needed a few weeks to condition to really reach its peak..

I think the only problem is the OP needs it turned around in a little over a week. I know US-05 can rip through the wort, but i'm not sure if there are other yeasts work with less conditioning time.

If you make it a higher OG pale, like 1,055 to 1.06, a kveik should rip through it in two to three days. Sometimes they are slower with lower og beers, due to lack of nutrients i guess.

I find 04 to be faster than 05 at typical ale temps, but the kveik will likely be fastest if you run it hot (85 to 90 f). I have no experience with the Imp House and can't comment on it.

Us 05 or any other Chico strain. I’m a firm believer in clean fermented pales.

I have a Cascade APA going with US-05. It's been in the primary at 70F for 12 days and is pretty much ready to package.

Ha. Those are different months. My bad. US-05 for sure. Mine just keeps getting better and better.
OP
OP

Miraculix said:
If you make it a higher OG pale, like 1,055 to 1.06, a kveik should rip through it in two to three days. Sometimes they are slower with lower og beers, due to lack of nutrients i guess.
Click to expand...

Some people really like BRY-97 for a pale ale. They prefer it over US-05. It is a tricky yeast. It's early activity is not so dramatic and fools you into thinking it has a long lag time. But it is working away.

Any that you’d like. 5 weeks for a kegged pale ale is an eternity. You can procrastinate an extra 3 weeks and make your deadline.

Saunassa you are describing the basic recipe for an outstanding pale ale, however no one has mentioned Wyeast 1056. I've brewed a lot of great pale ales using 1056. Often times repitching the family over and over. Maybe I'm set in my ways I haven't used anything else in a pale ale or IPA. Good luck let us know how it turns out.

Nottingham, quick and clean with no peach like 05
OP
OP

From recommendations it sounds like US-05 of which I have a few packets on hand so I will pitch 2 into the batch and save the two liquids and Nottingham for another brew.
Last edited: Aug 4, 2021

I'll upvote WLP-090 as well. It's everything @ChuckS1 described.

I've brewed 7 times since July 10 for an upcoming competition and used Super San Diego in three of them: a Blonde, an IPA and DIPA. The last two were repitches of harvested yeast from the original batch.

All were fast, vigorous and clean, and floc extremely well. The only caveat is that it is a temperature sensitive yeast. The optima are 65F-68F. If you can keep it in that range you'll be golden and pretty much done and dusted in 10 days, especially if you can spund. Grain to glass that quickly with neutral flavor is amazing.

The people who have trouble with this yeast aren't paying close enough attention to temperature control. If you believe what the Interwebs say, WLP-090 is the "Chico III" varient, allegedly used by Ballast Point, Stone and Green Flash. Ergo, the moniker "San Diego Super". Just remember: TEMPERATURE!
OP
OP

If I lived somewhere that I could get liquid yeast from I might try the wlp-090. I just finished brewing and setting the fermenter under the steps in a tub with ice to finish the cooling. Missed my estimated OG by 2 points. next time I will add in a little more grain and maybe if I remember to add the lactic acid before mashing in maybe that would help.
anyway, 2 oz cascade. 2 oz Amarillo and 2 oz Mosaic, 2 packs of us-05 pitched onto 5.25 gallon batch. and now to monitor the temp. 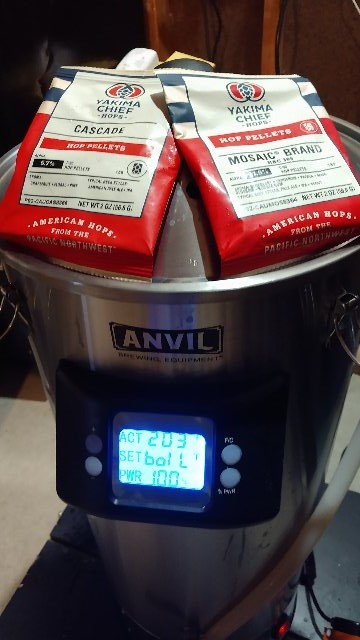 Question for those of you that like WLP090, as I have not yet tried it:

I've heard some say that while it's "clean" like 001, it produces a more balanced beer, with a bit more perceived malt character than 001 (despite the higher attenuation), while remaining a hop-forward strain. Has this been your experience?

I like my American IPA's to have a little more backbone than 001 gives me, but when I try less-attenuative strains like 051 or 002, I end up with a fruity vibe that I'm not really going for. I like 007 but I sometimes pick up a subtle fruity thing with it, too, though that could just be my mind playing tricks on me.
T

Wlp 029 German ale is super clean and lets the hops shine if you are looking for something different. It attenuates really well too. I use it on all my hoppy beers.
S

I know you‘ve already brewed but the imperial house is perfect for a quick pale ale. Have done it many times in 3 weeks. Just need a starter for that quick.

Twinkeelfool said:
Wlp 029 German ale is super clean and lets the hops shine if you are looking for something different. It attenuates really well too. I use it on all my hoppy beers.
Click to expand...

I've used 029 a number of times in alts (including a decent Mocktoberfest). I liked it but don't tend to think about it for hoppy beers. Thanks.


Spivey24 said:
I know you‘ve already brewed but the imperial house is perfect for a quick pale ale. Have done it many times in 3 weeks. Just need a starter for that quick.
Click to expand...

I've seen several yeast comparison charts that show A01 House and WLP007 as both having a Whitbread-dry origin, so I suspect they are fairly close (have not tried Imperial as my LHBS doesn't carry them).
OP
OP

Spivey24 said:
I know you‘ve already brewed but the imperial house is perfect for a quick pale ale. Have done it many times in 3 weeks. Just need a starter for that quick.
Click to expand...

I like this pale ale recipe a lot and will be brewing it again. Good to know the House works well. I may need to brew up another batch in a few weeks for my friends.
OP
OP

Transferred the pale ale and the cream ale to kegs today. First two brews with the Foundry and they taste good. The US-05 really worked quickly on both brews and flocullated ok. still a bit hazy but give it a few days in the fridge and they should look good.
I brewed a cream ale with vienna in june and while ok I dont care for the citrus/tart that Voss leaves. The us-05 is much better, taste the malt and hops and and no tartness.
Thank you for the advice to use the us-05, i am excited to see how it goes over at our little brew fest.
Last edited: Aug 21, 2021

For posterity, I have loved Hornindal in Fruity-hopped IPAs and Pales.

Nottingham, 65 F, clean as you can get, fast and drops out clear.
OP
OP

The 5s have the pale ale and the cream ale. The 2.5s have the hefeweisen that will be for vip ticket session. Figure in a 2.5 I can give it a shake to stir up the yeast a bit before the session starts. 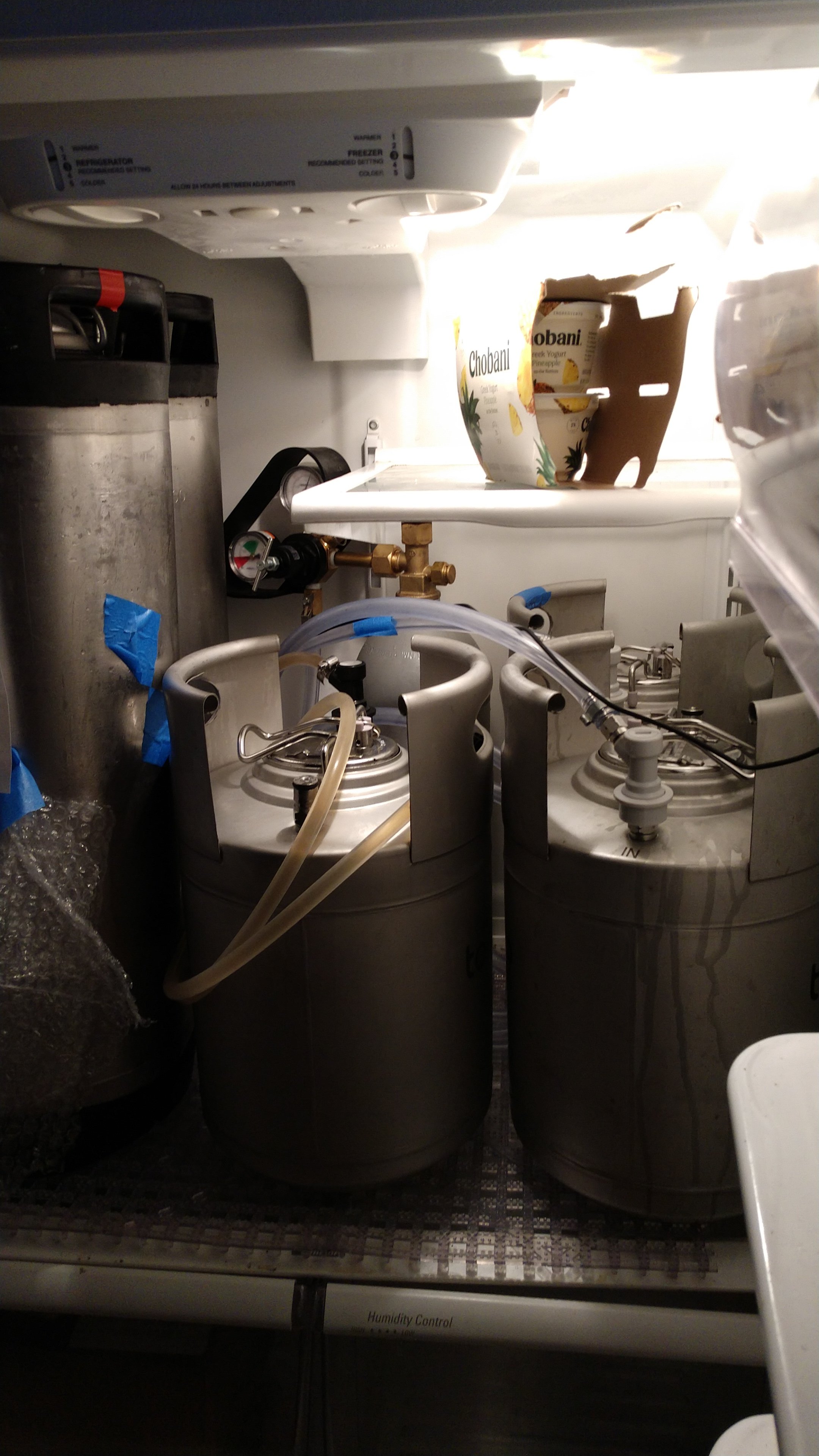