When to Declare Fermentation Done When Using Tilt

I know the commonly shared advice is to take gravity readings when you think fermentation is done, and when you get 3 days of the same gravity reading, it's done and you can cold crash, keg, whatever. But this is advice based on taking a gravity sample once a day. With the Tilt, you obviously have access to a lot more data, with samples coming every 15 minutes. So you can see the whole trend and understand a lot better when the gravity trend has flattened out.

Given the very slow rate of change of gravity when you get toward the end of fermentation, I would agree that if you're just taking data samples once a day, you could fool yourself thinking you're done when maybe it has a bit more to go. So the 3 days of samples reading the same makes sense.

For those of you using Tilts, do you consider fermentation done once you see the gravity has bottomed out, or do you wait until you see it bottom out and then wait 72 hours?

Initially I thought I didn't need to wait 3 days like all those suckers that don't have a Tilt. But lately I've been wondering if there's some "post gravity drop clean up" I'd be missing out on by cold crashing too soon. 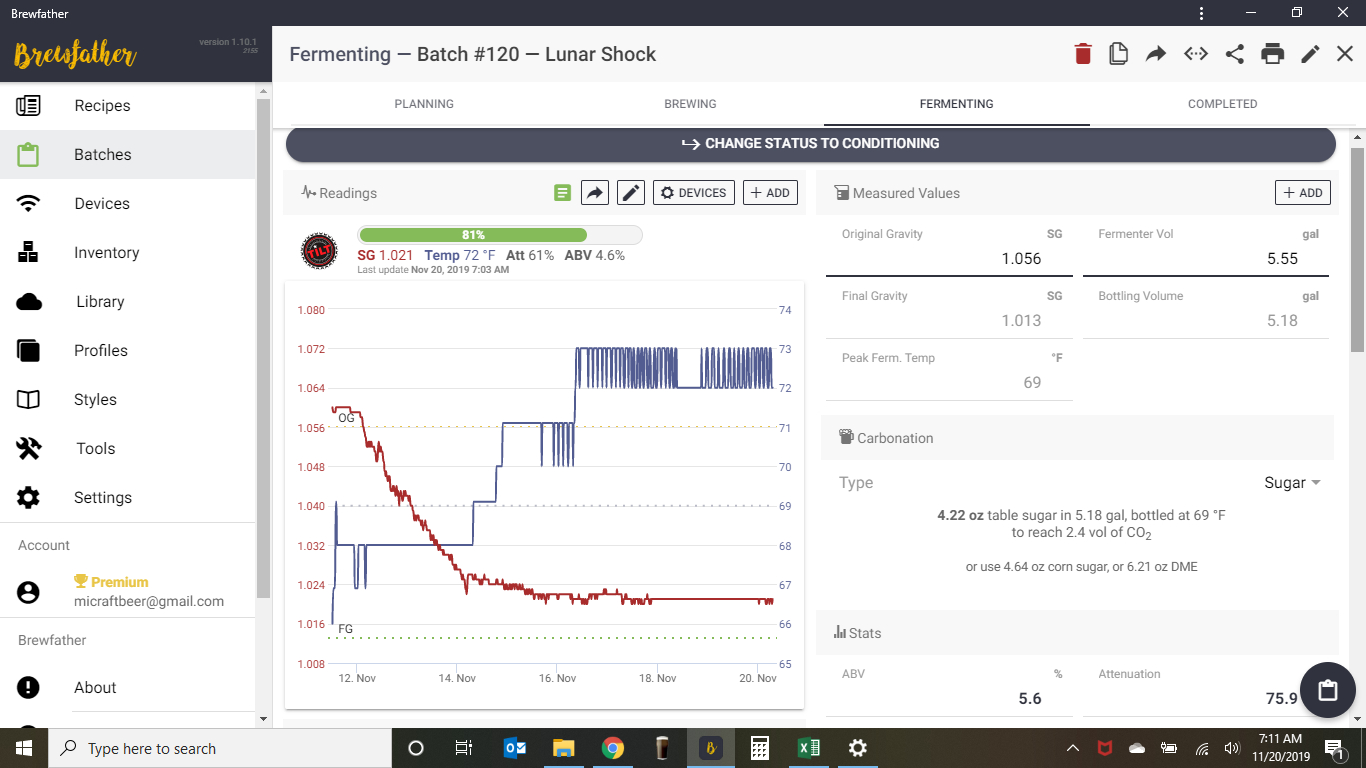 I still wait an extra 3 days. Even when fermentation might appear to be "done" it still usually fall another couple of points after another couple days in my experience. I am a big advocate for patience in brewing. No need for such a hurry. Leave the yeast alone to clean up after themselves and truly complete their work. This results in a superior product every time.

Unless it's a new recipe, I can usually tell when it's done. I hit the gravity number I expect, and if it holds for the second day, it's done.

I'm not usually in any hurry to crash, and I raise the temp at the end to allow the yeast to clean up, so whatever remaining reduction in gravity there is to go, it goes. And done. After a couple days of that, I'll drop the temp back down to ferm temp for a few more days. I think there's benefit to the beer sitting on the yeast cake for at least a bit, so I'm in no hurry.

I think this matters more in terms of packaging--if you're bottle conditioning, you need to be sure it's done so you don't get bottle bombs. With kegging, it doesn't matter except that a beer which finishes in the keg will have a thin layer of yeast trub after it flocculates.

I keg, so it's not so much a matter of concern to me. If I was bottling, I'd err on the side of being sure it's done.
R

Beers need some time to "mature" which they can do in the bottle, in the keg, or in the fermenter. Leaving the beer in the fermenter once the gravity has stabilized seems to be as effective at maturing the beer as bottling or kegging. Perhaps this maturing is just allowing more of the yeast to settle out.
M

Your chart looks remarkably similar to mine. When it hits that inflection point where it slows greatly the blowoff activity has slowed to almost nothing. That's usually when I'll dry hop if I am and start a two day temperature ramp. Over a 2 day ramp it will usually drop a couple points. I'll let it sit there a few days or more, honestly more dependent on my schedule and patience. When I cold crash, especially in a beer with a dry hop, I'll see it quickly drop maybe up to a couple more points. Guessing between the temperature difference all the stuff I'm crashing out makes it a little more dense. I'm kegging everything even if I bottle some later so it can mature in there.

Do those of you with Tilts check with a hydrometer at the end ?
OP
OP

I HATE reading a hydrometer. The bubbles, the miniscus, the tipping, how the numbers ALWAYS rotate to the opposite side, yuck. I always take a digital refractometer reading and do the correction calculator based on OG.

I don't use the Tilt for its absolute value numbers, but rather as a monitor of fermentation progress.
Last edited: Nov 20, 2019

I did the first few times, but I've found at the low end, my Tilt is dead on. At the top end it tends to overestimate OG. But I'm more concerned about the lower end, including when I want to seal up the fermenter to carbonate/condition the beer toward the end.

I usually still double-check it, but it's more from being OCD than an expectation that it is off. My usual procedure is that when I clear the lines before pressure transfer to keg, I'll collect enough beer in a small pitcher to fill the hydrometer cylinder. It's cold, so I'll run hot water over the cylinder to warm it up to room temp, and then check.

YES I do. The Tilt isn't super accurate at end of fermentation.

dmtaylor said:
YES I do. The Tilt isn't super accurate at end of fermentation.
Click to expand...

I recently learned this. The Tilt activity can be stopped but the FG can be off so I note FG with a bottling hydrometer.

My goal is to watch the Tilt and catch the beer near the end of fermentation — at the knee in the bottom curve — and close transfer into a clean, sanitized, CO2 purged keg. I let it finish at room temp for 3 daze then cold crash under CO2 pressure.

How long should I let this beer ferment?

SG swings after Tilt bounced off bottom of fermenter