When exactly to take OG reading

I'm a little confused about when to take OG reading in an extract brew. I do a 2.5 gallon brew and do a full boil — about 3 gallons is in the brewpot at end of boil and about 2.6 gallons after being cooled goes into fermenter.

I know OG is to be taken at the end of the boil. But is it best taken before or after cooling the wort? I have read in some instructions that it can be taken right before or even right after pitching the yeast. I'm a little confused there because if one reads the OG after the wort is cooled, then what could the homebrewer do at that point to correct the wort if the OG is not on target?

Let's say the OG is taken after cooling and right before pitching yeast, assume the wort is in the fermenting vessel and OG is too low. Would homebrewer calculate the amount of malt or sugar and pour it into the fermenter. Or does homebrewer have to make a slurry, boil it, cool it, and then add it to the wort in the fermenter? And then take another reading?

If one takes the OG reading at end of boil but before cooling, wouldn't the brewer be able to, at that point, more conveniently be able adjust the gravity of the wort by addition of more fementables or water?

And what about converting hydrometer or refractometer reading to adjust for the (hot) temperature of wort?

And in reading at end of boil but before cooling, let's say an adjustment is needed to raise or lower the OG reading. Then does the homebrewer need to then reheat the wort to the boiling point after the adjustment and before a subsequent OG reading? Does one keep doing this until one is happy with the OG reading? This could be a never ending process!

And of course there is the issue of adjustments by adding fermentables or more water affects amount of volume (gallons) of the wort. Yikes.

I use a refractometer and take a sample just after the boil when it’s still warm. I just let it sit and cool off a minute until the reading becomes stable.

Anglecard48 said:
But is it best taken before or after cooling the wort?
Click to expand...

Best and easiest after your wort has cooled.
And do it before pitching yeast, as taking your sample may scoop off some of that precious yeast.

Since you're brewing extract, as long as your actual post boil volume is close to your recipe's volume, gravity should be just as close.
You can always top up with some extra, cold water in the fermenter. Put a line on your fermenter at the surface of a pre-measured 2.5 gallon volume.

As @Blackdirt_cowboy said, a refractometer can give you quick gravity readings, and $20-25 is money well spent for that speedy readout.

But pouring 4-6 oz of hot wort into a stainless cup/beaker that was put in the freezer or better, sits in a small tub with ice cubes can bring that down to hydrometer temps easily in a minute too.

With extract based recipes, assuming
there isn't much (if anything) to adjust.

Check the kit when it arrives to verify all ingredients were received. Recipe software can be used to confirm the recipe is correct. Organize ingredients on brew day so they are added at the right time. Learn your boil off rate and adjust starting wort volume (water can be added at the end of the boil).

After a couple years of brewing and getting my processes down, I often don't even bother anymore to take gravity readings. It is just one more step that almost never changes what I do. It ends up being more just out of curiosity than a step that helps my beer (and something else to clean).

Agreed with taking the reading after the wort's cooled and before pitching the yeast. I typically grab a sample of wort on its way into the actual fermenter, it's convenient.

That said - I also already took a reading before boiling. So I knew that, going into the boil, I was in a good spot. If I needed to fix anything, that's when I would do it. Luckily that's gotten to where it never happens.

So - measure OG after chilling, and make another measurement before boiling so you can be pretty sure that OG will end up where you want and have time to "fix it" if needed. I.e. adding some DME.

As a reminder, OP stated OP is brewing with extract.

With extract based recipes, pre-boil SG will vary based on the amount of water / extract used at the start of the boil.

The concept of gravity points is useful though - as all the gravity points are known and contained in the package(s) of extract that came with the kit.

Thanks to all of you. It has become clearer to me now. I boiled an Amber Ale yesterday and hit the OG and hit the expected post-boil wort volume just about right on the nose.

As you all said, it is important to pay close attention to what is in the kit or in the recipe. One thing that I really paid attention to yesterday and not so much previously was amount of evaporation that happens during the boil. Previously, I just topped off to get to wort volume — and sometimes would top off after pitching yeast — which of course affected OG. I do a full boil of half-recipe volumes (i.e. 2.5 gallons rather than 5 gallons). So this really should be a no-brainer. No calculations necessary. Just be careful and pay attention.

I'm hoping — and have no reason to doubt — that BrewnWKopperKat is correct and that if I am keen to pay attention to:

the recipe is correct
all ingredients are added
boil off volume known and accounted for
wort volume is correct just before wort is pitched, and
the wort is not stratified

... then all will fall into place.

Yesterday I took an OG reading at end of boil while measuring the wort volume with a dipstick I fashioned. The values were within a reasonable margin of error: OG of 1.050 rather than 1.052) and end-of-boil volume was just as indicated in the recipe book, "Brewing Classic Styles". So I did not have to add anything or boil off any more water to get to my OG up or down. Had I needed to do so, my kettle was still on the burner so I could have fired it up and made adjustments.

I also took another OG reading once the wort was cooled before pitching the yeast. It was the same, 1.050.

I have been able to brew potable beers, once every three or four brews even a good beer, but consistency has been my bane. I'm seeing now that I was inattentive to some details and ignorant of some that I should have been more careful with.

Not to make it worse, but - water takes up more volume as the temperature goes up. 6 gallons at room temperature will become 6-1/4 gallons at boil temp. Just something to keep in mind. And if you do top off with cold water, make that measurement decision with cold wort.

could just be miniscus!

Meniscus: "3. The curved upper surface of a nonturbulent liquid in a container that is concave if the liquid wets the container walls and convex if it does not."


How to Take an Accurate Hydrometer Reading (link) 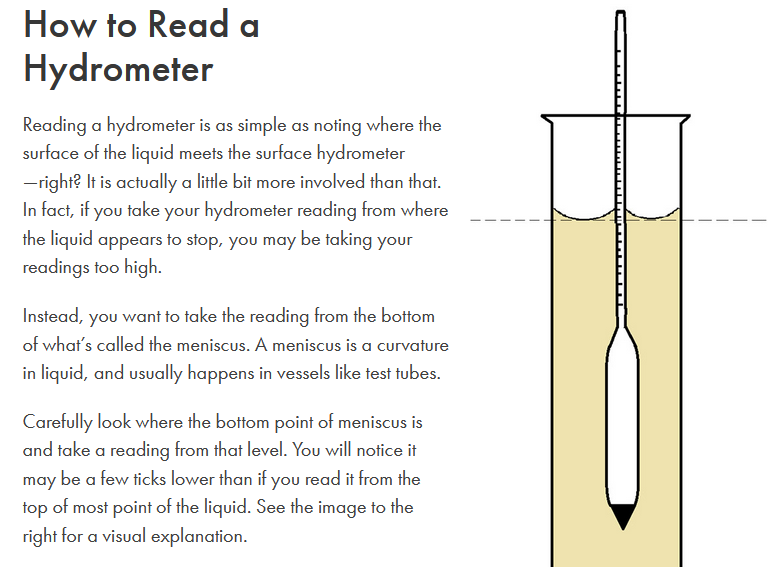 It's funny isn't it? The detail. I'm glad you brought up the difference hot temperature makes to the measurement of the volume of the wort. And then the fluid that crawls up the hydrometer -- the miniscus. I was hoping there was a technical term to describe that.

'god' smiles at homebrews! only the devil frowns!

I made a dipstick a couple days ago as I got into this topic with all of you. I got a stainless steel rule to use as my dip stick and filled my boiling kettle with 400 ounces and measured the height of it when cool and when hot (hot means 150 degrees up to 208 degrees). I did the same with 496 ounces. These volumes represent (from latter to former) the amount of wort at beginning of boil and the desired amount at end of boil.

The hot 496 ounce volume measured 7 3/4" on my ruler, the cool 496 ounce measured 7 9/16". The hot 400 ounces measured 6 3/8" and the cool 400 ounces 6 1/8". It's hard to take an accurate dipstick reading, especially when the water is hot. So I would say the difference is plus or minus an eighth of an inch. However, it seemed that once the temperature exceeded 154 degrees the volume measured out higher than when cooler than 154. And the difference held consistently from 154 degrees up to the boiling point. It never got greater than 1/4" or so.

My wife says I'm an idiot.

But the dipstick helped me during the boil to understand how much evaporation was taking place.

Funny thing about the meniscus is that SOME hydrometers are intended to measure it the other way, the edges, not the center. I know, it's odd, but if you truly want to do it right you have to check any instructions included.

she just wants you to make her a pi!

B
Any automated way to measure gravity during boiling stage?

H
OG much lower than expected, but post mash gravity was close