So over the last year I moved from Boston to SF, and sold/repurchased most of my brewing equipment. I previously had been doing all grain with a 15 gallon cooler, boiling on a gas stand, straining through a mesh strainer in a funnel which I'd have someone scrape while I poured and doing only primary fermentations in glass carboys.

While I was still in Boston, I built an electric brewing setup to do brew in a bag off a 220 electric oven plug. I successfully brewed two batches that way, putting them into glass carboys then kegging.

The three beers that I've made in SF have all had the same two problems however:
1) They have wicked chill haze with large particles you can strain with your teeth.
2) They all stop fermenting about half way between the OG and my expected FG.

So what's different now:
a) I'm in SF, new LHBS, new water.
b) I've been doing this one handed, so I haven't been straining the wort at all because my old method required two people (I'm pretty sure this is the cause of the chill haze). I tried whirlpooling but the electric element functionally prohibits this.
c) I left the lid to the kettle in Boston, so it's been a lot harder to hit the correct mash temps. For the first two I way overshot the temp (getting into the 170s) and probably denatured the enzymes. For the third attempt I managed to keep it with 2 degrees of 149 for an hour, and for kicks, I threw in two table spoons of the dried enzymes.
d) I'm now fermenting in corny kegs. The first batch was done at normal pressure, the next two had a spunging valve on them. I let the pressure rise after the first few days in those to as far as it would go, which was somewhere in the low 20s.
e) Fermentation temps have been in the high 60s to low 70s in my SF apartment. In Boston, my basement was a pretty stable 60 degrees.

The recipes have been two IPAs and a low cal Pale Ale. The first batch (IPA) was done with WLP-001, the second two (IPA and Pale Ale) with Safale-04 (which I harvested nearly a pint glass full from the second IPA batch to threw into the pale ale)

The first two batches I opened the ball valve and held up the corny to let the beer splash in. On the third I added a quick disconnect, some hose, and this plastic aerator attachment which sprays the beer in all directions. So I'm pretty sure there is enough oxygen.

I split both the second IPA and the Pale ale in half between 3 gallon serving kegs. I think I might try to pitch WLP-099 into the ones I don't have in my fridge to see where I get.

To solve the chill haze, I think I'm going to do a double brew in the bag, leaving one bag in for the boil to catch the trub and hop pellets.

For the temp issues, I'm going to buy a new lid as well as some of that aluminum foil bubble wrap and wrap the whole kettle so I can turn the temp off (or nearly off) during mashing.


Basically I've changed so many variables that I'm struggling to determine which things are most likely contributing to my gravity issues. These are all recipes that I've made before (either with my cooler mashtun or on this BIAB system in Boston). Any additional insight would be helpful. Thanks.

And because photos are fun:

1) My brewing setup
2) My spunging valve
3) How I've squeezed a 3 gallon serving keg in my fridge
4) My method for dumping trub/recycling yeast off a fermentation keg when moving it to a serving keg. With this, I can in essence do what people do in a conical by pulling yeast/trub off the very bottom (I attach the liquid to liquid jumper here, dump the initial stuff, harvest the middle, dump the last, then close and swap the disconnect to the serving keg to fill) 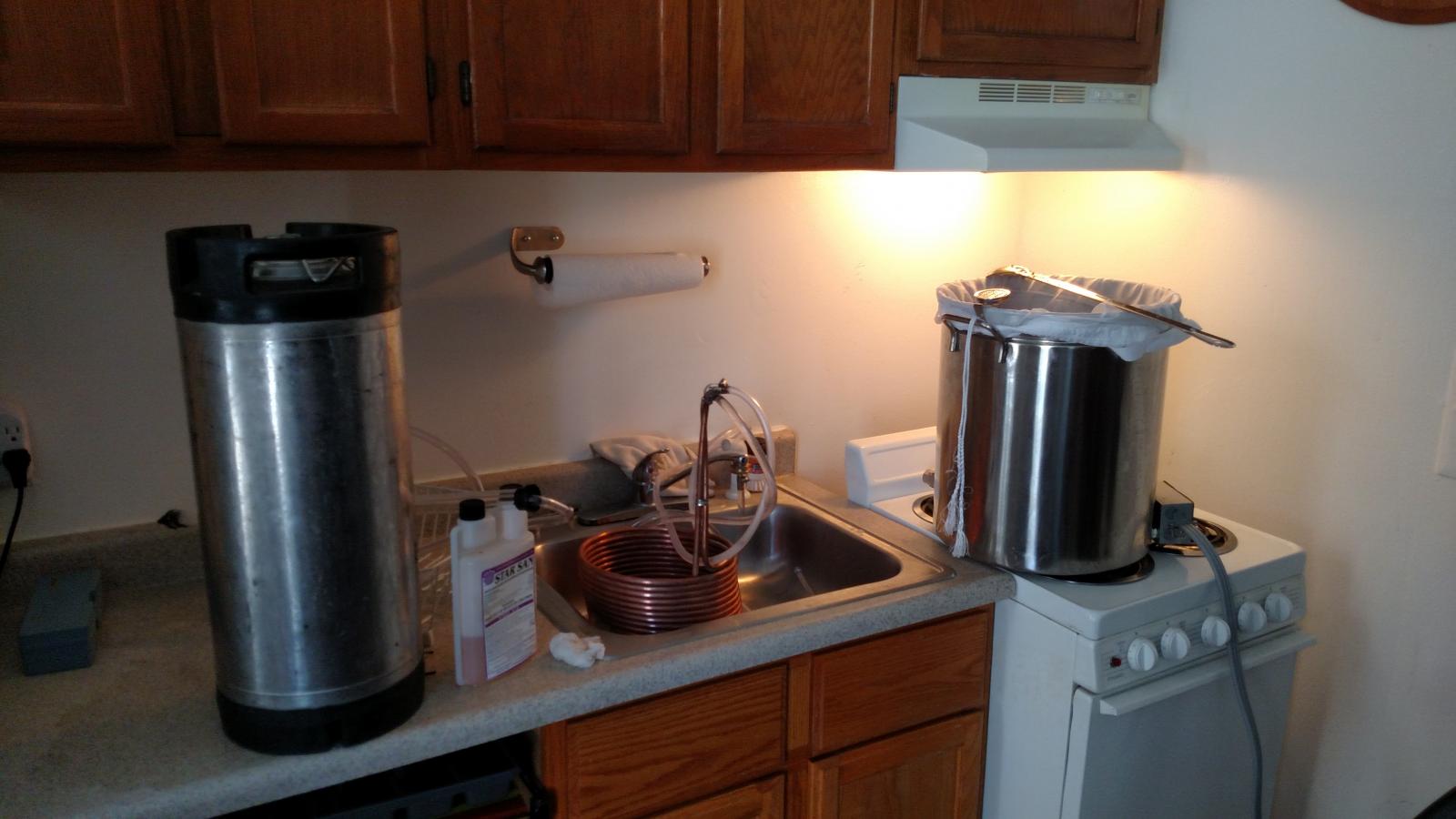 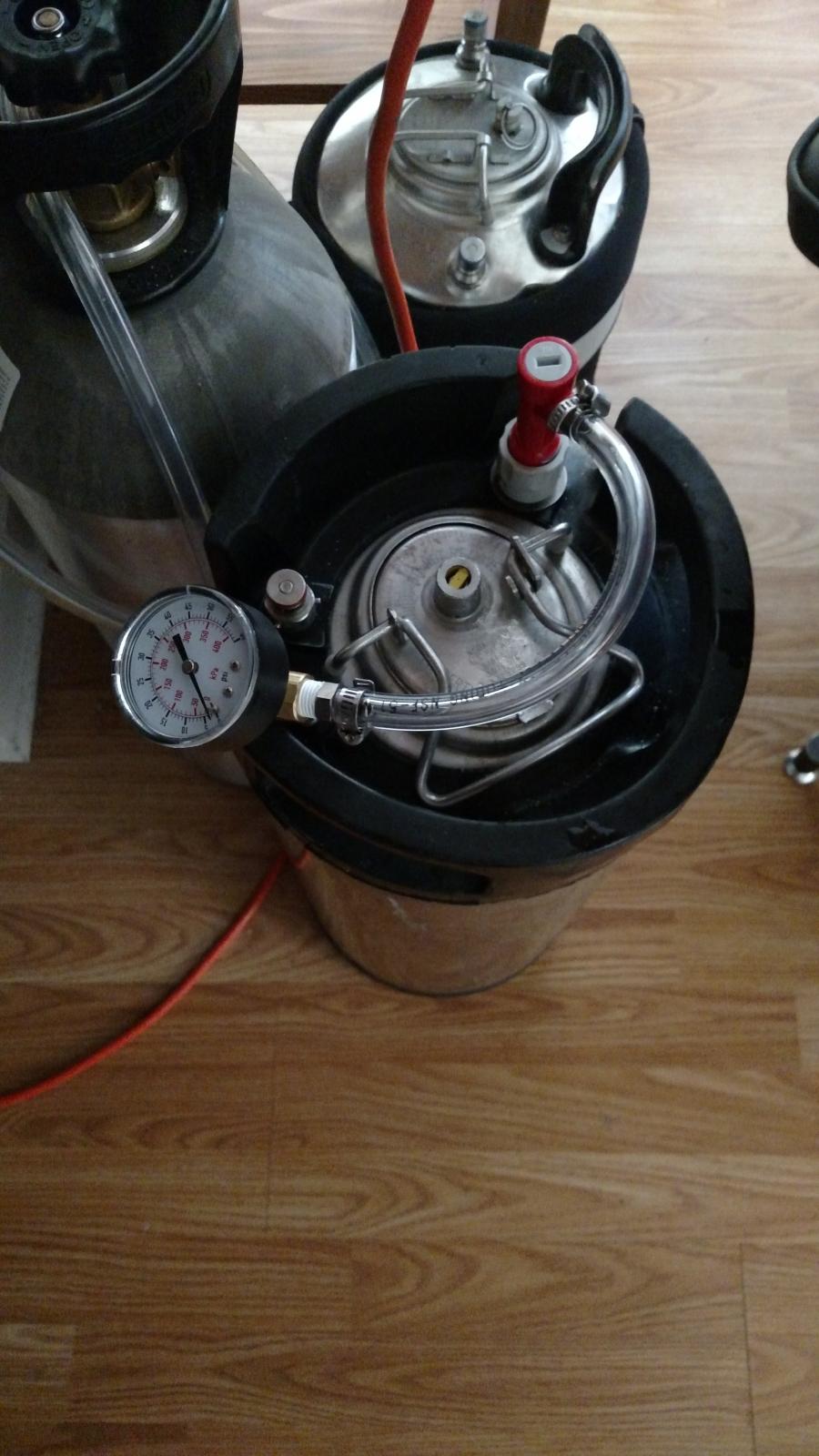 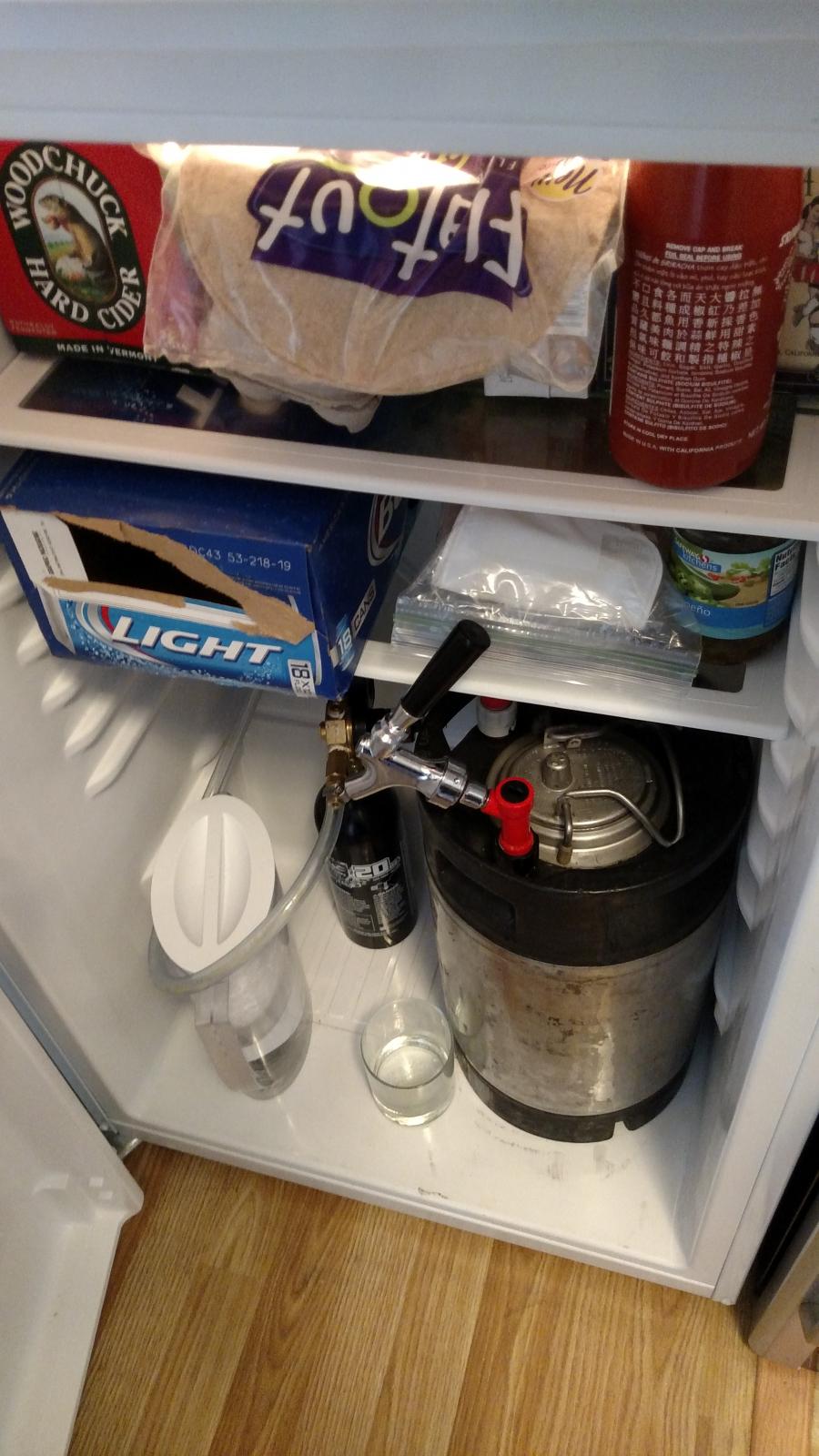 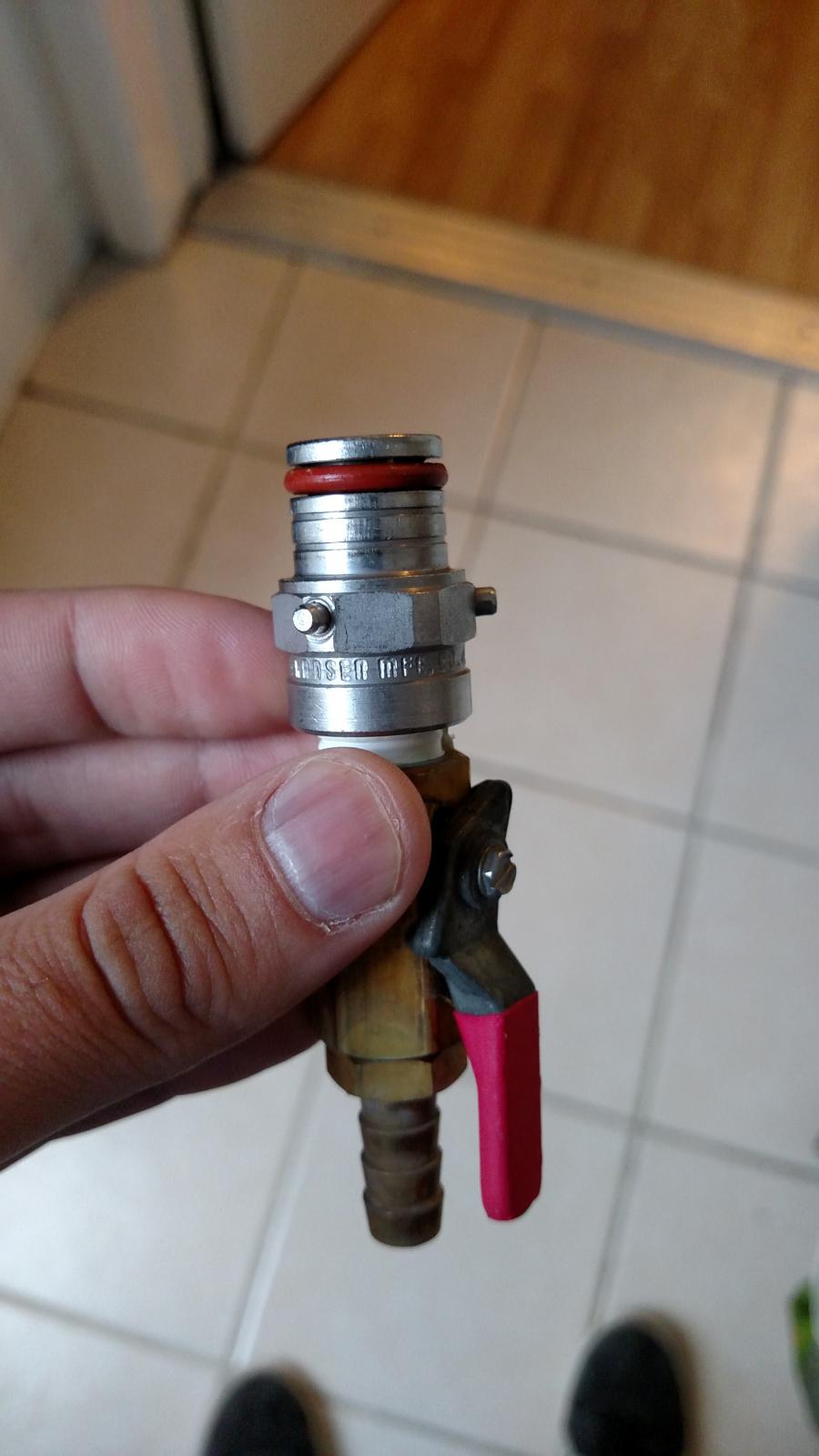 First thing, get a water report. Either from your municipal water supply, or send a sample to Ward labs. Read up on the water primer in the brew science section. Knowing the water and adjusting as necessary will probably improve your beer.

Then (after adjusting water as needed) use 1/2 whirfloc tablet per 5 gal brew in the last 5 minutes of the boil. After ferment is complete, and before bottling, cold crash at 32 F for two days before decanting into the bottling bucket. 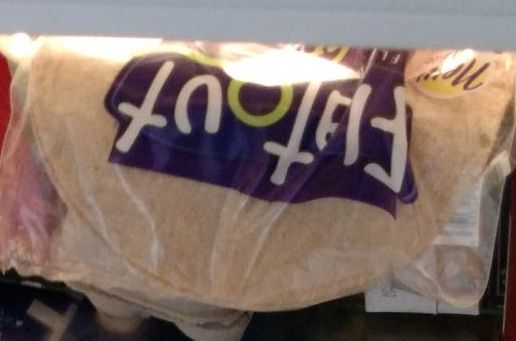 Now that you are in SF, I'm willing to bet temp control is now a big issue where it wasn't so much before... I'd look into getting another one of those mini-fridgs and set up a fementation chamber.

Perhaps your yeast viability source is low... I'd suggest working with a starter if you are not already in an attempt to even out the viability of your yeast.

If you are stalling out, make sure your thermometer is calibrated correctly.
OP
C

Apparently San Francisco has Calcium levels of only 13 ppm, which the interwebs tell me is important for yeast health and flocculation. Guess I'm going to try adding some Calcium. PH is high (9.3), so I'm guessing Calcium Sulfate or Calcium Chloride.

You can't guess at water additions. Get a report or start with RO water and build it from there is my suggestion.
OP
C

Is this report not sufficient?

acidrain said:
First thing, get a water report. Either from your municipal water supply, or send a sample to Ward labs. Read up on the water primer in the brew science section. Knowing the water and adjusting as necessary will probably improve your beer.

Then (after adjusting water as needed) use 1/2 whirfloc tablet per 5 gal brew in the last 5 minutes of the boil. After ferment is complete, and before bottling, cold crash at 32 F for two days before decanting into the bottling bucket.

S
What am i doing wrong

F
What am I doing wrong?